Just in case you’re not usually a fan of documentaries, I decided to ease you into the genre with a film whose tagline is: “Anyone can make it if they know how to shake it.”  If you’re already all about the docu, then you probably didn’t need that little gem to keep reading. 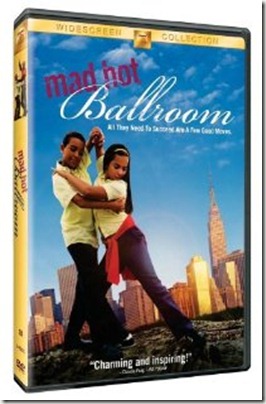 Trivia tidbit courtesy of www.imdb.com: In order to best capture his young leads’ expressions, Mad Hot Ballroom’s director filmed the majority of the time with  his camera at stomach level.

If watching 5th graders learn to rumba sounds like dubious entertainment, doubt no longer. Mad Hot Ballroom is delightful, thanks in no small part to its lively underage protagonists.  And the dancing isn’t even the best part.  Instead, it’s the chance to watch these budding “gentlemen and ladies” (as their teachers hope they will become)—many of them from low socioeconomic, minority backgrounds—decipher a long lost code of conduct.  Sage gender observations abound (the boys think the girls are bossy, and the girls complain that the boys don’t know how to lead!), and the kids steal the audience’s hearts with their candor, unintentional humor, and can-do spirits.  After following three separate New York City public school teams and their unflagging coaches/teachers through the preparation process, the film culminates in a city-wide dance competition.  Remember, this is real life (or as close to it as most movies get), so don’t expect to draw any Austaire/Rogers comparisons.  But do expect to smile. A lot.  And maybe tap your toes a little too.

Can’t find it to rent? Click here to get it (cheap!) from Amazon.

Leave a Reply to Wendy @ The Shabby Nest Cancel reply