Well, it was touch and go for a while there, but I survived my big weekend of exercising!

Why touch and go, you ask? I mean, isn’t this kind of your thing, Abbie?

Yes. It is, although more than two classes a day on a regular basis is definitely not the norm.

That’s right, folks. By the end of Saturday, the niggling nausea that had started around the end of lunch had turned into full-fledged upchucking. Oh the joy.  Still, it turned out all right in the end, and I’ve spent most of my Monday taking recovery naps, so a girl can’t really complain.

Before I show you any pictures, let me briefly explain what this whole shabang was about. I teach Les Mills classes, which simply means that I have certifications through the Les Mills family of group-fitness classes to teach Body Pump (strength-training) and Body Combat (mixed martial arts/kick-boxing). Every three months, I get a video in the mail with new choreography and music that I then proceed to memorize and then present to my members. After we’ve done the new stuff for several classes, I reintegrate older “releases” (routines) so that they don’t get bored with the same music/moves.

Well, this last weekend was kind of the mother of all fitness conventions if you’re a Les Mills instructor. Why? Because the people who teach us our moves for our various programs hail from New Zealand, but at this particular quarterly, they had come all the way to the Big D so we could take classes with them in person, and, if you were lucky enough to stalk see one in the hall or be one of the first ones in line at photo-ops, take pictures with them.

95% of the world wouldn’t have a clue or care who they were, but to us Les Mills’ fanatics, it was kind of like going to a U2 concert and getting your picture taken with Bono.

Hope so, but either way, here are the (MANY!) pics: 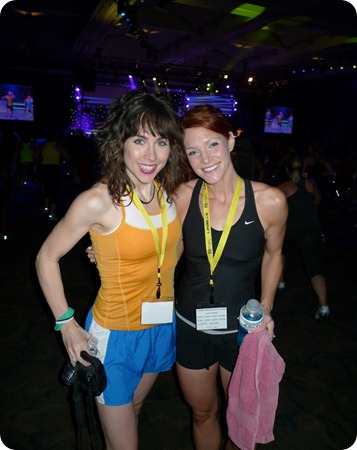 Here are Mandy and I, bright-eyed and bushy-tailed (I think we’d had a whopping 8 hours of sleep between us) right before the first class of the day (it’s actually already in progress behind us) at 8 A.M. Nothing like driving to Dallas to exercise with your bestie in the dark of the morning. I’m not sure what I’m doing as I seem to be lunging toward the camera. Ready to get moving, I guess. 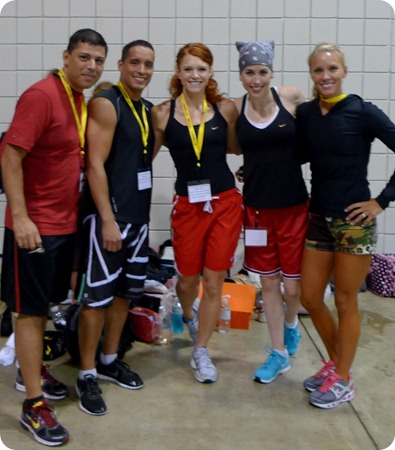 This is a small portion of the team that we trained with when we got certified in San Antonio for Body Combat. It was fun to reunite over a year later! Note to self: Try not to pose directly next to the tannest person on the planet when you are the whitest. 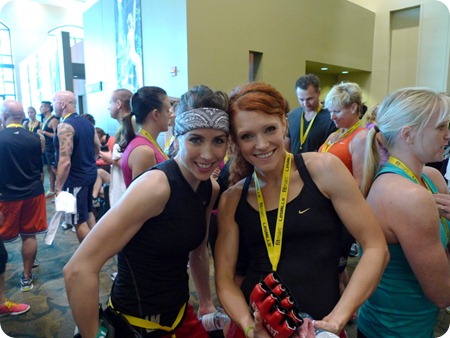 Getting excited for the first Body Combat class on Saturday. We were prepared to fight for a spot at the front. 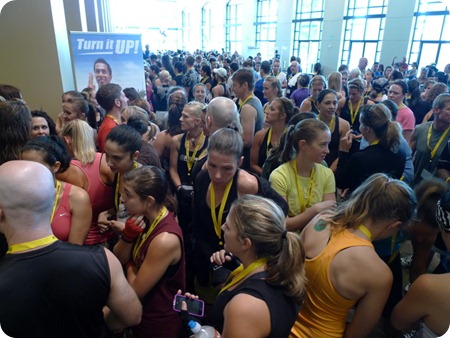 Of course, here are all the other locos ready to do the same thing.  This is just for one class, mind you. And it wasn’t even starting for another 15 minutes. We’re nuts! 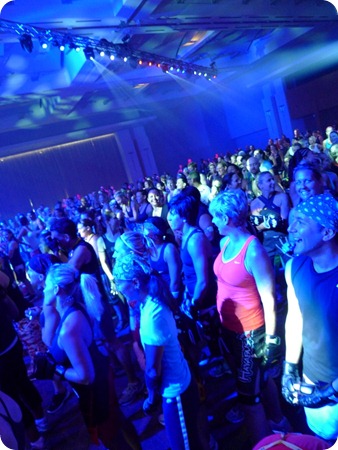 I literally grabbed Mandy’s hand, and we sprinted to the front as soon as the doors opened. We would have gotten second row spots, but a rather snotty girl informed us, “Um…this is where the second row is, and you’re not in it.” Ooookay. Third row’s good too (it didn’t matter in the end; by halfway through the class, we had worked ourselves front and center : )). 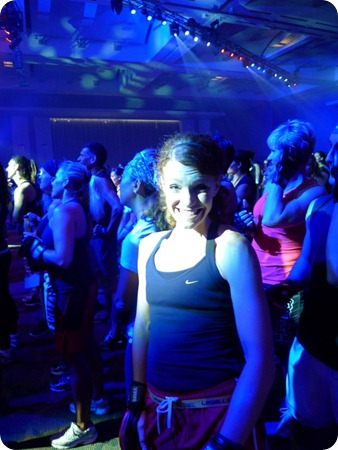 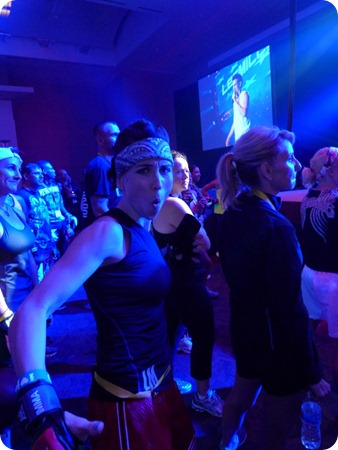 …and apparently, so am I. 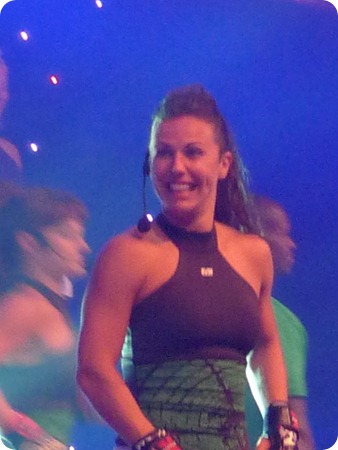 This is our first glimpse of Rachel Cohen (aka Rach), the female half of the married couple program directors of Body Combat. I don’t usually use terms like “girl crush,” but I might make an exception for her. 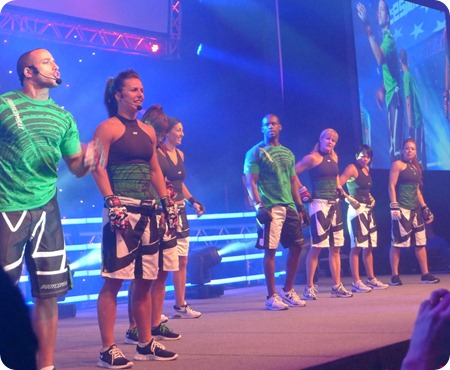 That’s her husband, Dan, on the left of her, and he’s equally cool. They’re both from the UK and have these awesome accents that up their radness factors considerably. 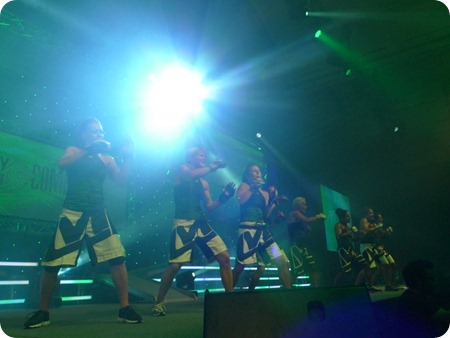 Not a very interesting photo, but you have to understand that every time I ran up to the front to grab my camera, I risked losing my spot and getting booted all the way to the back. These people were serious. At one point, Dan made a joke about how fanatical we all are and how if you touched somebody’s elbow during the push-up track, you got growled at.  He wasn’t even kidding! 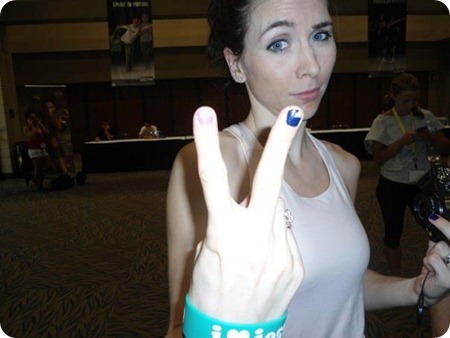 Not an attractive picture, I realize, but I had to steal this from Jen’s (fellow instructor) facebook page. Her caption?: “Abbie jacked up her mani fighting for her place in combat!!!!! LOL.” : ) You can check out the before of my nails from 5 Things Thursday. 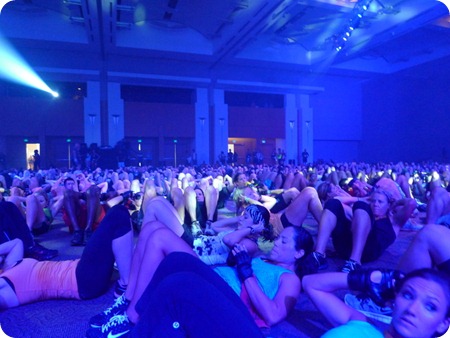 A sea of Combatters crunching it out.

There were something like 20 of the best of Combat instructors from around the nation + Dan and Rach presenting for us. As you might able to tell from the size of the room and all the lights, smoke, etc., it was quite the show. 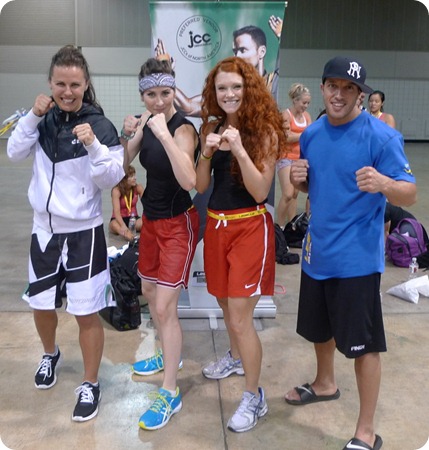 Our cheesy posed photo-op with Dan and Rach, with my white legs representing yet again. Cheesy or not, it was fun! I’m pretty sure I told Rach I loved her when we got up there.  She told Mandy that she reminded her of the red-haired vampire villainess from Twilight. Never having seen the movie or read the books, I had to do an imdb search when I got home, and I came up with this:

Curly red hair..fair skin.  Yeah, I can see it.

Of course, then, some guy came up to me and said, “Has anyone every told you you like Kat Von D but without the tattoos?” I had to struggle to think if I knew who Kat Von D was or what she looked like.

Here’s what I found when I did a search:

Whaaaaa? Really, dude? I mean, really? Please, please, please say you disagree. I mean, she’s not unattractive in a punkish/skunkish kind of way, but I’m pretty sure the resemblance is less than zilch. 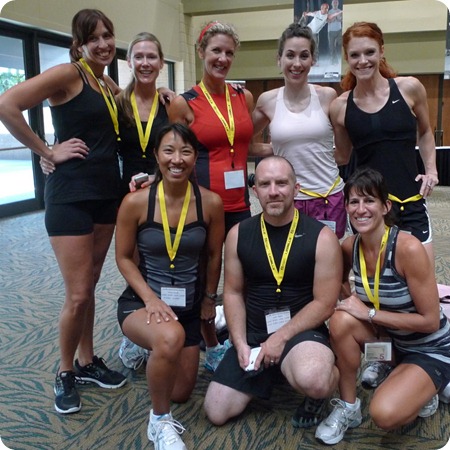 Most of the Les Mills team from our gym + some of our most hardcore participants (apparently, I’m reeeeally excited to have missed the all-black memo. Guh!). 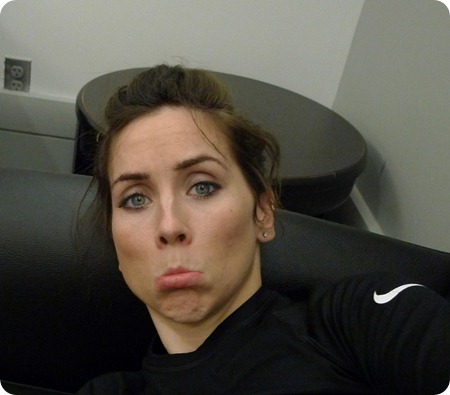 I know this is the world’s fakest-looking pouty-face, but I really feel terrible in this pic, and I’m feeling sorry for myself that I’m having to miss out on the second round of Combat (I made it through 4 tracks before starting to shake and feel nauseated…again) on Sunday after coming down with the bug on Saturday (of course I tried it, are you kidding? : )) 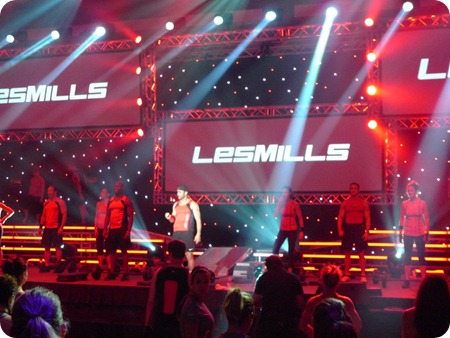 I took a nap on the bathroom couch and woke up feeling better but still pretty cruddy and didn’t think I would be able to do Body Pump.  But after another sprint to the front (quit shaking your head at me…crazy is the new sane), apparently, I got just the burst of adrenaline I needed and felt almost normal through the entire class. 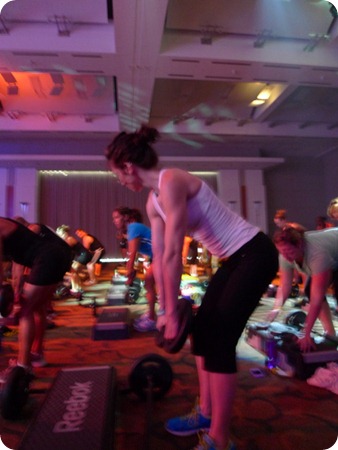 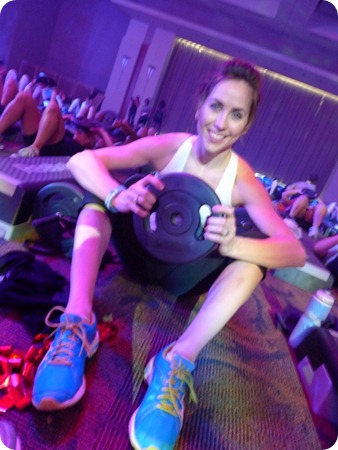 I made it to abs! 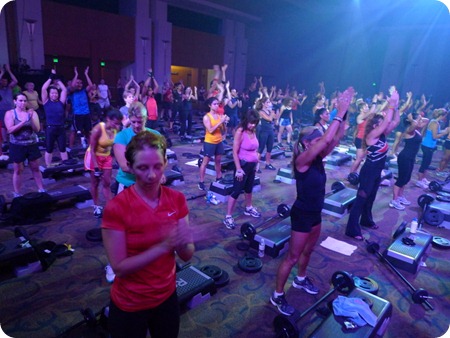 Happy we’re done! This was considerably fewer people than on Saturday, but it was still a pretty full house. 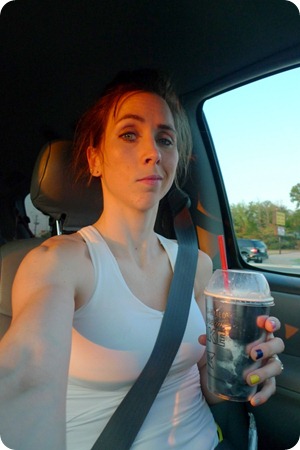 After being unable to eat almost anything all weekend long, a blended coke float was the only thing that sounded appetizing on the drive home. Unfortunately, that expression on my face = my opinion of the drink.  Blended coke floats are not supposed to slosh, folks. Oh well. I drank it, and it stayed down, so it’s all good.

And that’s it! Although, the fun just keeps on coming since I’m about to go teach another Combat class!

Hope you enjoyed the picture tour of my crazy workout weekend.

I have something yummy all ready to show you tomorrow for Try-it Tuesday.

P.S. For the super-observant, you might be wondering why my post title references “bugS” plural. Obviously, one was the stomach bug. But the other was maybe the largest roach I’ve ever seen…in our hotel room. I’m not going to name the chain or anything, though, because the room was ridiculously neat and sparkly clean (seriously, we were commenting on how crazy clean it was as soon as we got in the door and checked everything out), so I’m just going to chalk it up to an overzealous critter who really liked air-conditioning. Let’s just say it didn’t do a thing to help with the nausea.

P.P.S. Thanks for all your prayers. Adelaide did really well…no crying jags or refusing to eat or sleep. Praise Jesus!