The comments on this week’s T+G ran the gamut from absolute certainty (“It’s B, it’s totally B, and here’s what gave it away”) to complete bewilderment (“I HAVE NO IDEA!”), which made for some very entertaining reading, I must say.

But the poll was a great deal more unanimous.

72% of you said that Exhibit B was thrifted.

So, were you right? 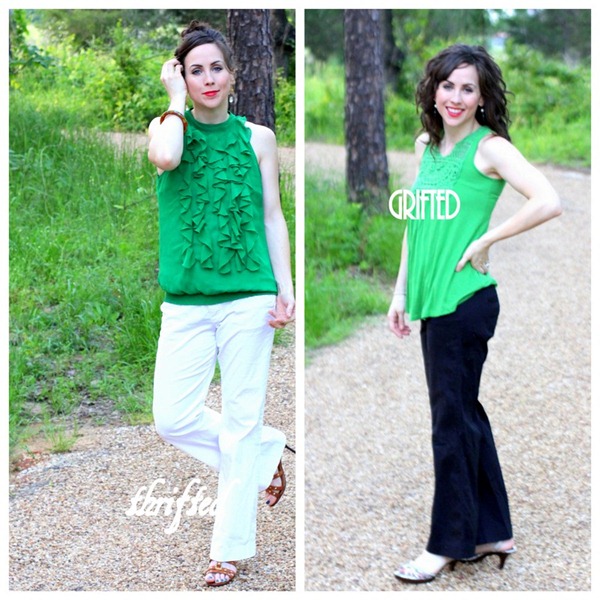 Not so much it turns out.

(By the way, I did not intentionally put that “thrifted” label down there by my feet. It just happened when I made the side-by-side photos using the collage button in Picasa, and I couldn’t get it to change. Boo!).

In all honesty, I would have said the same thing as the majority of you guys did.

I mean, pristine white pants (which are actually 4 sizes larger than I normally wear but still worked fine—after I rolled them down at the waistband that is—further proof that if you hold it up and think it might fit, you should at least try it, no matter what the tag says) and pretty, ruffly shirts are rare scores, indeed.

But they aren’t quite the impossibility that some of you guys thought.

(I actually snagged those white pants in a 30 Minute Goodwill Challenge I’ll be showing you next week). 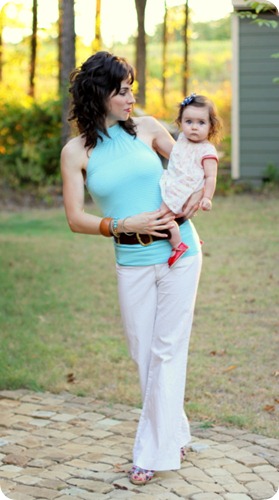 (Dang, my hair’s short. And my daughter’s solemn().

Moral of the story?

If you’re a thrifter, always keep an eye out for that seemingly unattainable find.

You might just scoop one (or two!) up when you’re least expecting it.

Oh, and I almost forgot…

My commenter of choice who gets 5 free entries into our next giveaway is:

“I guessed A, mostly because of your general trickery. Also, I’m hoping voting for A increases my chances of finding a pair of shoes that cute at Goodwill myself. Unrealistic? Perhaps. But a girl has to have dreams.”

There you guys go, calling me tricky again when all I’m doing is pulling out the only two comparable items in my closet and then showing them to you.

But I can’t help but find Lindsey’s illogical hope of finding the same shoes in a Goodwill of her own somehow endearing.

It just occurred to me that Mandy had a pair of wedges she found at GW that I loved and wished that I’d found first (it’s true), and then I DID find them at a different Goodwill in my size (and no, she hadn’t just redonated them).

So, don’t give up hope Lindsey. There’s still a chance!

Especially if you happen to wear a size 8 because those of you who noticed that those sandals were a smidge small were right on the money, and they will be going in our next Saturday Sale (which is tentatively planned for this upcoming weekend…no promises).

See you soon for 5 Things Thursday!