You know your weekend was good when you spend all of Sunday trying to recover and falling asleep in the middle of doing things like reading to your toddler and chatting with your mama.

For one, it was small (about 100 women), which definitely lent itself to allowing the participants to get to know each other more easily. Another perk (for me, anyway) was the fact that it was an explicitly Christian conference. No one blog represented there was exactly the same as another, but we were all united by our desire to glorify Jesus with our words and actions. There was awesome worship (pretty much every women in that room had mascara streaks down her cheeks when the last song faded and the lights came back up) and just an overall feeling of encouragement and surprising humility (surprising because—hello—we’re bloggers, the most narcissistic species of writers out there).

Here’s a peak at some of the details: 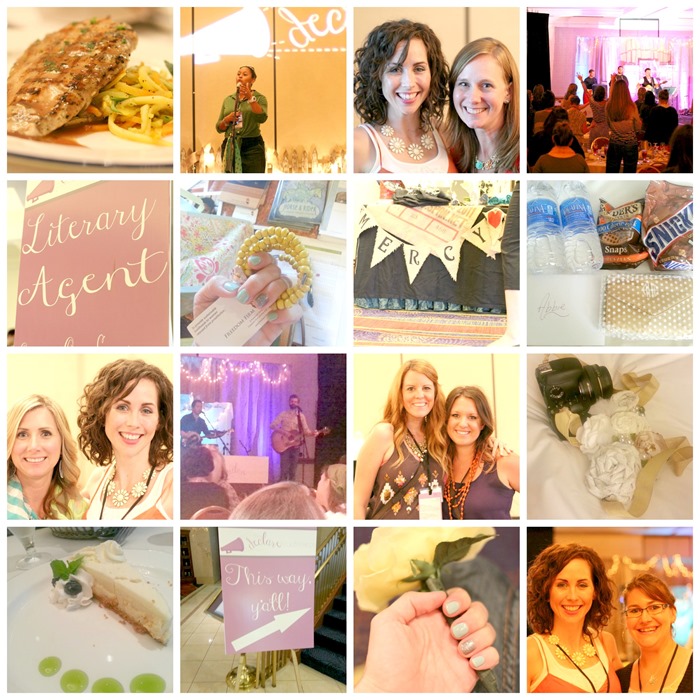 Great food (top and bottom left; apparently, I couldn’t wait to take a bite of that chicken before I got my picture in)

Great speakers: one of my favorites was Tony Evans’ daughter, Chrystal (,top row, 2nd from the left) who has just co-written a book with her dad called Kingdom Woman, and gave a brief, informal talk about how she defines the title of her book, complete with anecdotes about how her daughter didn’t shower for 7 straight days at camp one year because there were spiders in the shower.

The music was awesome too. And while the worship team was great, my favorite was Shaun Groves (3rd row, 2nd from the left) who provided, in his words, “background music” while we ate dinner and then made us all giggle with stories about how his adopted son, Sambhaji—pronounced like “somebody,” but with a J—starts hollering, “MY song!” every time he hears Queen’s “Somebody to Love!” Of course, then he made us cry with his description of the plight of the many orphans that Compassion International (for whom he is an ambassador) is helping to rescue. Good, good stuff.

Lots of swag and fun sponsors + a chance to meet with a literary agent and pick her brain about publishing and a couple of book ideas I have (2nd row).

I even nailed my “Making the Most of DIY Blogging” presentation—the success of which I attribute to the extremely kind and attentive group that I got to talk to and also to the fact that my talk was supposed to last an hour, I started at 3:30, and when I finished and looked down at my watch, it was 4:29. WOOT! I mean, maybe I said something worthwhile too. But I’m most proud of my precise timing. Who wouldn’t be?

(Would anybody like to see a post here on the blog called “Making the most of DIY blogging?” (I already have the nooooootes!)

I’d be less than truthful if I said that I enjoyed every second of the conference, and I’ll tell you more about that later on this week, but suffice it to say that that was nobody’s fault but mine because the people and the experience couldn’t have been better.

If you think a blogging conference might be in your future, I encourage you to put Declare ‘14 down on your calendar. You won’t regret it!

And now it’s time to unpack (because, yes, I “packed” for a one night stay in a city only 2 hours away) and do all the Monday stuff that still needs doing (which is pretty much all of it).

And…it’s time to get a MOVE ON!

12 thoughts on “Move-it Monday: I DECLARE I had a great weekend!”