Ready to take another bite out of your elephant, er, to-do list?

Just in case you’re wondering what I’m talking about, you can read the original Project Elephant post, and then come on back.

(You can also take a gander at my first Project Elephant accomplishment—my redone front flower beds). 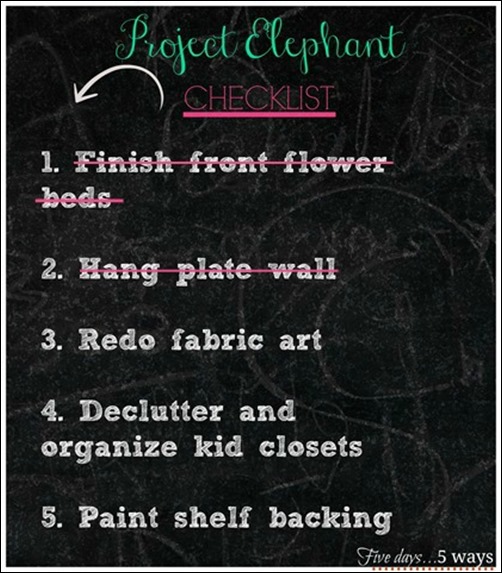 To be completely honest, after I showed you my plate wall “before”… 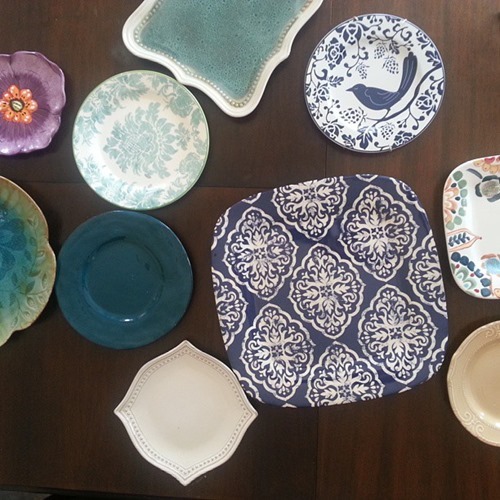 …not much changed for quite a while.

Hanging things is not my forte. I tend to over-think it. If there’s a word for majorly over-thinking something (majover-thinking??), then that’s what I do. I measure and worry and fret. I make marks with pencils, then erase them, leaving unsightly smudges on the paint. I make (messy) diagrams. And then, finally, when I am satisfied that I have left nothing to chance, I tap one tiny nail into the wall, eyes squinted almost shut in dread at making a mistake. Then I start hanging things on those tiny nails…and discover that all of my obsessive tweaking and measuring was for naught. Because something is always at least a little bit wonky.

My husband is exactly the opposite. I can explain where I want things (because that part I’m good at), and he stands there holding it, makes a little mark, then confidently slams a nail into the wall, hangs the thing, and—WALA!—it looks fantastic. I don’t know what’s wrong with me, but if there’s a term for hanging-challenged (that doesn’t make me want to make some sort of morbid joke about stretchy necks), I’m that.

Which is a reeeeeeally long, roundabout way of saying that I kept putting off hanging my plate wall because I knew if I did it alone, it would take me three hours, and I would probably still hate it when I got done.

Good thing I’m married to Super Hanging Man (who is desperately wishing I would stop giving him such dubious titles).

Because after a little noodling (Bwahahaha! I originally typed canoodling. Whoa, there, Abbie) around with different plate configurations on our living room floor (whilst 5 small children ran amuck, threatening to make Project Elephant: Plate Wall a moot point since broken plates don’t hang super well), we got after it.

I don’t really have any progress shots for you. Not that you need them since this is a fairly simple process. Plus, they mostly would have consisted of pictures of Shaun’s holding plates in various positions with a quizzical expression on his face, my cutting up more grapes to keep the twins occupied every 5 minutes, and my other kids’ sliming a Hello Kitty coloring book with glitter glue.

(If you really want to be entertained by our shenanigans, then you need to go check out their reaction to our “new” piano).

ANYhoo, after the configuation conoodling, I sketched out a very rough diagram so I wouldn’t forget where everything went in the 3 minutes it took to transfer it all from the the living room to the breakfast nook (a very real possibility when I regularly walk very purposefully into a room, then freeze and wonder why in peaches I am standing in the mudroom, holding tape, and staring at the paint shelf). 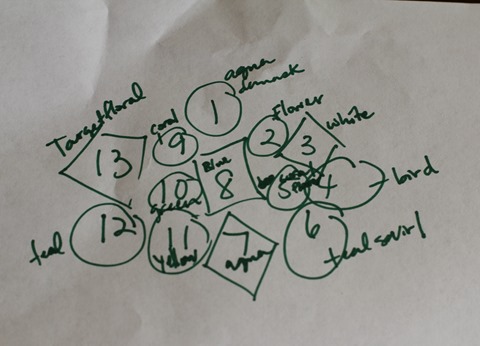 (I told you it was rough; isn’t my handwriting divine?)

And when all of the directing and quizzical expression and nail-pounding and glitter glue clean-up was said and done (only about 30 minutes of it, though), we had this: 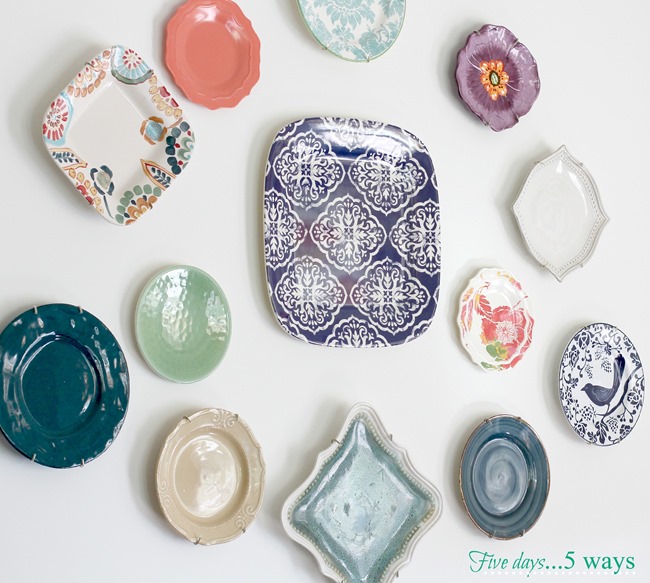 It sort of has a pattern. I love symmetry too much to be completely random. And I’m already twitching a little wanting to move a few of them around a bit. But for the most part, we just eyeballed it. Because that usually turns out considerably better than all my careful measuring.

I’m definitely going to be on the lookout for a few more that will coordinate, but I’m happy with it for now. 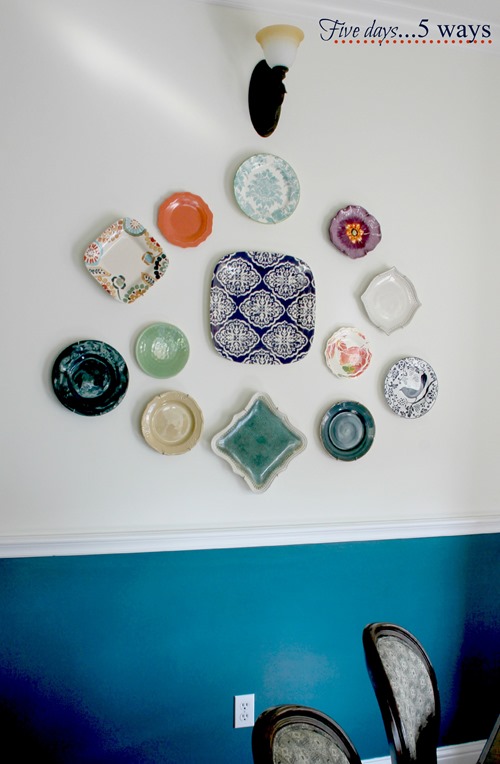 There’s lots of other color in the room, like in the mustard-colored chandelier: 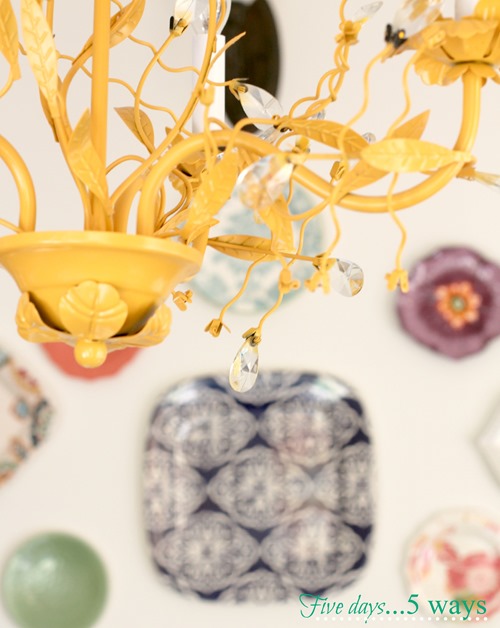 And this cute little cream pitcher. 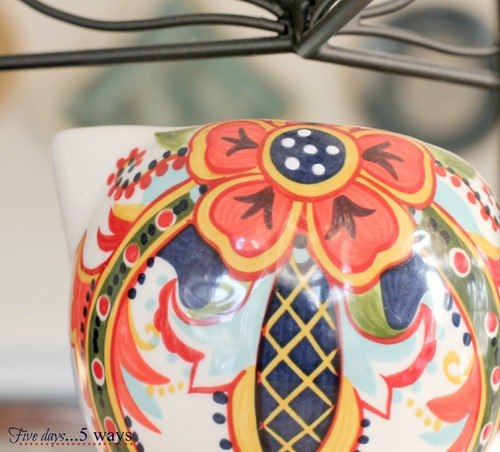 …not to mention my bright curtains: 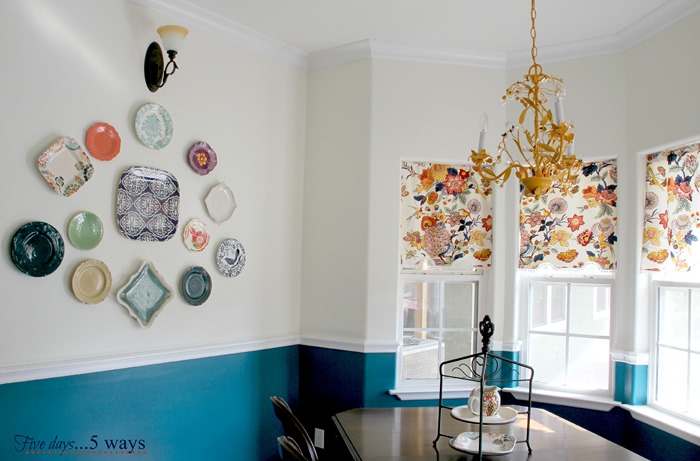 I’m still in the process of tweaking this room, but I’m thrilled to have that wall, which has sat blank for so long, filled with something cheerful and colorful at last. 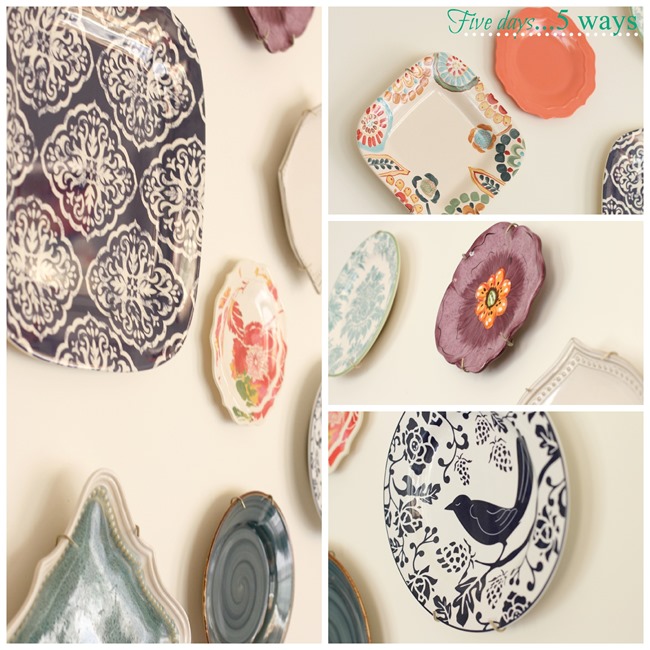 As far as the actual sources for my plates, some are from Goodwill (the yellow and the two teal solids), a few are from Marshall’s/Ross (the two diamond shapes and the purple flower), and the bird plate is originally from Pier 1 (sometimes, you can still find one on Ebay) but was a gift from Mandy.

The only ones you might be able to still find in stores are the blue and white damask platter, which is actually melamine and is from Walmart (I couldn’t find it online) and the three small plates (coral, green, and coral/green floral), which are also melamine, from Target.

And as far as the actual process: all but the melamine plates (which we hung with Command strips) are hung with nails and plate hangers (which you can buy from Michael’s with a 50% off coupon for about a $1-1.50 each).

It’s probably a $60-70 project all told. Not the cheapest DIY art ever. But quite the bargain for such a large scale impact.

Oh, and the wall color, in case you were wondering, is Sherwin Williams Really Teal.

So…now it’s your turn! How did you fare with Week 2 of Project Elephant? Remember: it’s not about perfection. It’s about progress!

Link up if you wrote a post about it, or you can always leave a comment (even attach pictures) or leave me a link on the Facebook page or Instagram using the hashtag #projectelephant.

Linking up at Tatertots and Jello.