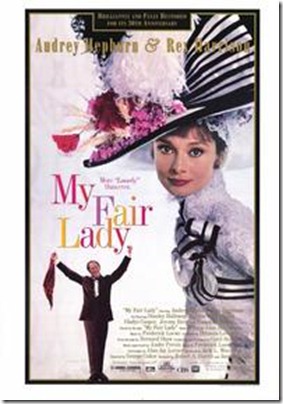 Fun tidbit c/o www.imdb.com: Although playing a 19-year-old, Audrey Hepburn was actually 35 in real life. Jeremy Brett (30) was cast as 20-year-old Freddie so Hepburn would not seem too old in comparison.

If you’ve somehow managed to miss this “loverly” tale (or it’s been a while) of a guttersnipe cockney flower-girl who morphs into a princess just by learning to speak proper English (from a crotchety, misogynistic linguist who is thrice her age!), you owe it to yourself to hunt it down TODAY. The costumes are gorgeous, the set designs amazing, the acting perfection, and the songs infectious.  No wonder My Fair Lady won 8 Academy Awards, including Best Picture, Best Director, and Best Actor (though, sadly, no Best Actress for Audrey Hepburn).

In a film stuffed with memorable scenes, my favorite remains the moment when a newly tamed and dignified Eliza Doolittle is provoked by a slow horse at an Ascot race to break out of her prim and proper character and bawl: “Come on, Dover, move your bloomin’ a***!!!” (There are three asterisks instead of two because she uses the British version).  Please try to avoid imbibing any liquids during this line because they will shoot out your nose, and it won’t be loverly at all.

I hope the rest of your Friday is fabulous.  Mine will be spent cleaning, cooking, exercise-instructing…and singing (you think I could actually recommend My Fair Lady and not end up humming bars of “I Could Have Danced All Night” and “Just You Wait” all. day. long.?)

I wonder if I could write an entire post in Cockney? That’d be Robin Hood (puh-lease click this link, and happy browsing!), eh, gov’na?! 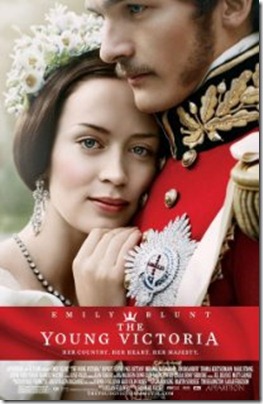