I wrote this email to a reader-friend last night (actually, Molly, who made this fab scarf that’s part of our big PCM giveaway): 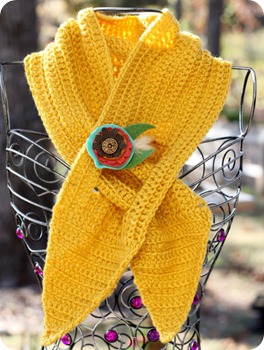 “The Lord was listening, girl! Tonight was a huge success. Practically every single chair filled, and Super Mom was such an inspiration…not because she was eloquent, even. Her English is fairly limited. But her genuineness and humility shone through like beacons, and it was such a great night.  Thanks for praying, friend!”

I included this because I have a tendency to be longwinded (say it isn’t so!), and the above sentence is such a concise and accurate summation of last night that I’m shocked I wrote it.

I was hoping for 30 women and a mild level of interest. Instead…”every chair filled” and “it was such a great night.”

So, what was last night?

Super Mom—aka Sara Nnyanzi—is biological mother to five, adoptive mother to over 20 more, and the spiritual mother of over a thousand other students and orphans who attend the 6 PCM schools (yes! the same PCM you keep hearing that we are raising money for!) in Uganda.

Despite the “fairly limited” English that I described above, I have no doubt that every single woman in that room could understand Sara perfectly as she described, not only the process and trials of becoming a mother to over 1,000 children, ages 5-22, but also the relatable struggle of being mocked for her fashion sense, or lack thereof.

Seriously? Is there really nothing new under the sun?

In addition to working tirelessly to provide for her children and her “children,” she is also spearheading an effort to help the women of her community (and beyond) come together in moral/spiritual support. When they meet, these ladies can’t just hop in their air-conditioned cars and drive ten minutes to the local fellowship hall (maybe making a quick pit stop at Starbucks along the way).

Instead, they must walk or catch a motorcycle taxi (a very funny description of the roads was that you’re “airborne” 90% of the time because of all the ruts) and travel long distances.

And yet, they meet. And they pray for each other. And—very practically–they exchange clothes so that, when one has an event that she must look nice for to represent her pastor husband or her church or school, she can arrive with confidence that she won’t get snickered at and told she looks like a “Christmas tree” (true story, sadly enough). 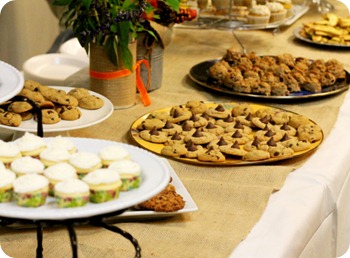 Loads of yummy treats. You can see my vanilla cupcakes there in the foreground, but they were far from the tastiest thing on the menu. 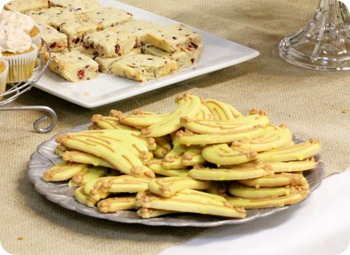 These “banana cookies” (actually just sugar cookies, but very cleverly decorated) were adorable and oh-so-delicious (PCM’s logo features a banana plant because it is such an integral part of their diet and represents one of the first investments that Mark and Monica Barrett, who head up PCM here in E. Texas, made in PCM Uganda). 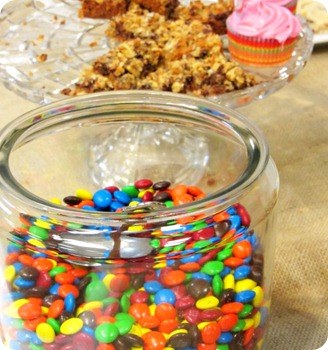 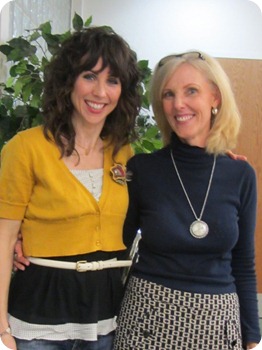 This is Lisa. She’s amazing. 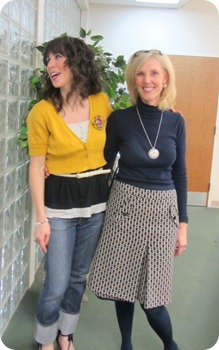 She’s also really funny (I’m not sneezing, I’m laughing), talks 90-miles-a-second without ever getting tongue-tied, and is pretty much a blonde, squeaky clean version of Lorelai from Gilmore Girls (Lisa, that’s quite the compliment in my book!).

She contacted me after she read my PCM Feature Friday almost two months ago and asked if we could possibly team up to add a little pizzazz to an event she had already booked with Super Mom. I said sure! How about we make flowers, charge a little bit of money, and then you let me take home all of the proceeds so I can include it in this big giveaway/fundraiser I want to do? (Talk about bossy, huh?)

And she said yes!

Honestly, when we started talking about our dream of having maybe as many as 50 women coming together to craft, inhale sugary goodness, and hear wisdom from Super Mom, we were both a bit wide-eyed. I pictured me and Lisa up ‘til the wee hours of the morning practically every night between then and last night snipping fabric and making cold calls.

But you know what? I didn’t have to do practically anything! Lisa organized an army of volunteers to decorate, round up supplies, make food, and spread the word.

And then she whipped out all of these: 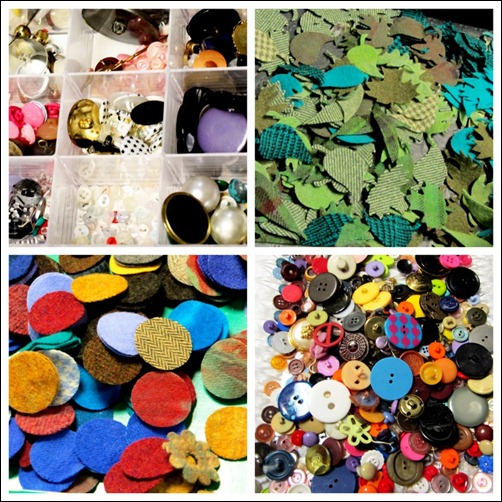 Just kidding. But wouldn’t it make an even better story if she had?!

She did, however, crank out a gazillion of those adorable wool felt shapes on her die cut machine, which I am now convinced is the most ingenious invention since the spork. 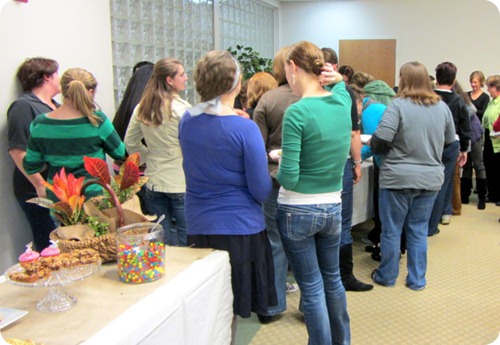 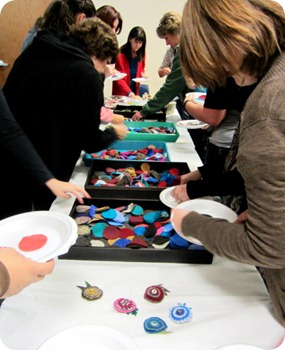 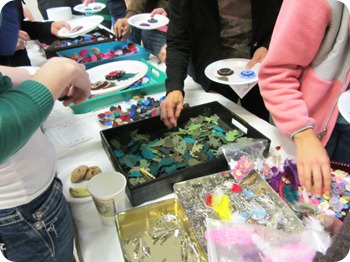 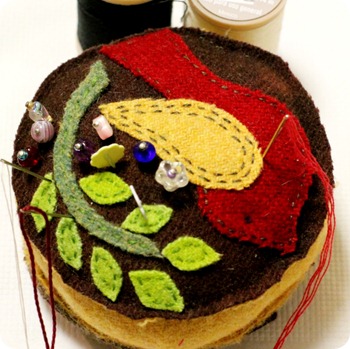 The most ridiculously adorable pincushion. Ever. I kept slapping my own hand to keep from “accidentally” slipping it in my bag to take home with me. 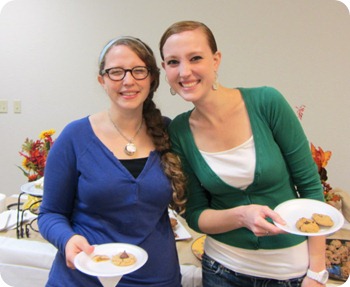 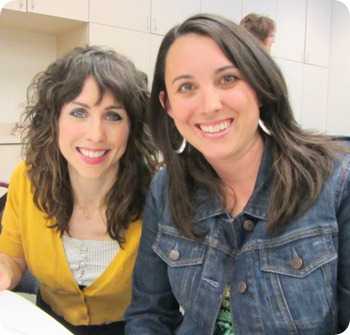 I’ve stressed that PCM is a very locally-run, hands-on organization, and I finally got to meet someone whose emails I have so often seen: Christie Hayes, who, along with her husband Justin, are Mark and Monica Barrett’s right hand partners in the PCM work here in E. Texas.

Remember how we were hoping for “maybe 50?” We had over SEVENTY-FIVE women getting their craft on all in one room! When I finally put my camera down so I could make a flower and eat a cookie, I couldn’t find a spot to sit. 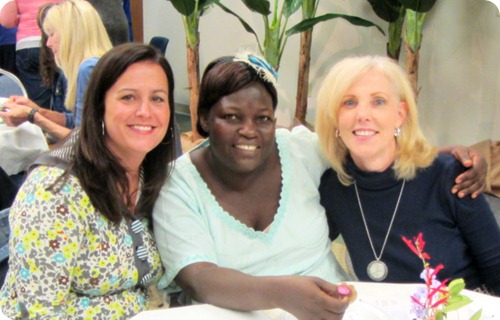 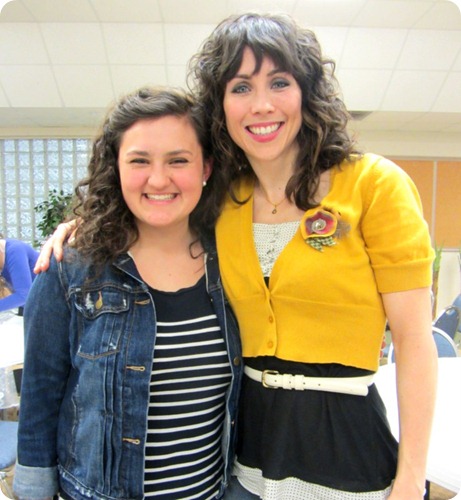 This is Bailey Barrett, Mark and Monica’s sweet, sweet daughter. She’s in 11th grade, and she told me that she takes breaks from her homework to check my blog to see if I’ve posted anything new.

Can we just say, best moment of my week?!

I taught high school Spanish for three years at the school she now attends (now you know what I was before I became what I am now…got that?). I’m sad that I just missed getting to teach her! 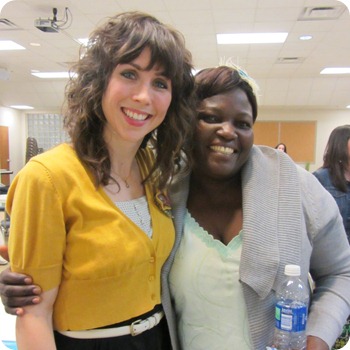 Yay! I got a picture with Super Mom! This woman is precious!

Thank you so much to everyone that came out and supported, crafted, and bonded. Each and every one of you is a blessing!

I haven’t gotten an official tally, but I do know the head-count was over 75, and the cost was $10/head, every single dollar of which is going into our PCM Classroom Fund.

I will be giving you an update on the amount donated through the fundraiser + last night’s proceeds + the total from “Shop My Closet for Good” (still a couple of items left if you want to go snag them now) very soon!

P.S. I had an incredibly nice lady come up afterwards and speak words of encouragement to me. And then she asked me if my cheekbones were real. True story. I almost fell over. Thanks for a truly unexpected and hilarious moment, Betty Ray!

P.P.S. Because I really like you guys, and I want you to know how grateful I am for your support of PCM, I made you a wool felt flower pin too, and it’s going in the giveaway! You actually already saw it in that first scarf pic, but here’s a close-up: 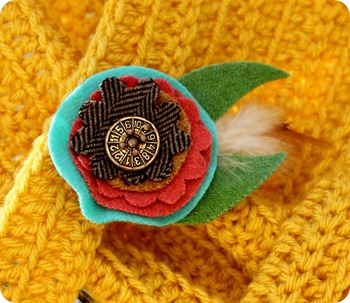 Have a great weekend, folks…and never underestimate God! He’ll prove you wrong every time. Of course, it’s a good kind of wrong.