After last week’s discussion about Life’s Never-ending To Do List, I’m convinced that I must not be the only one that struggles with balancing productivity (i.e. list-making) with distractions and too little time (i.e. life).

In fact, even without all your commiserating comments and emails (which I am so grateful for, by the way…I enjoy reading every single one), I might have known I wasn’t alone since it’s such a universal topic that even popular children’s book are talking about it: 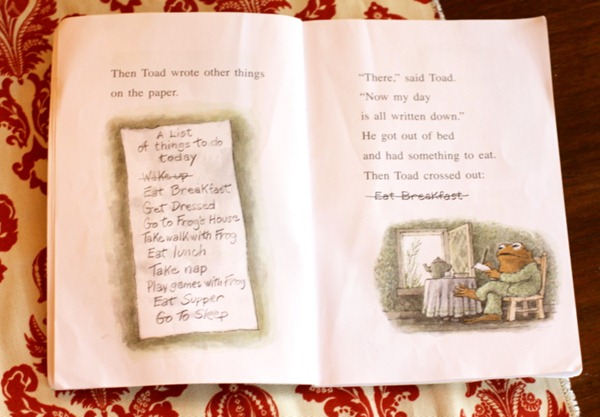 See? Toad totally gets that whole “writing down the mundane stuff so you can feel accomplished when you check it off the list” concept!

If Toad’s doing it, then I’m totally doing it (after all, who wouldn’t want an amphibian who wears trousers and a blazer but no shirt as a role model?). 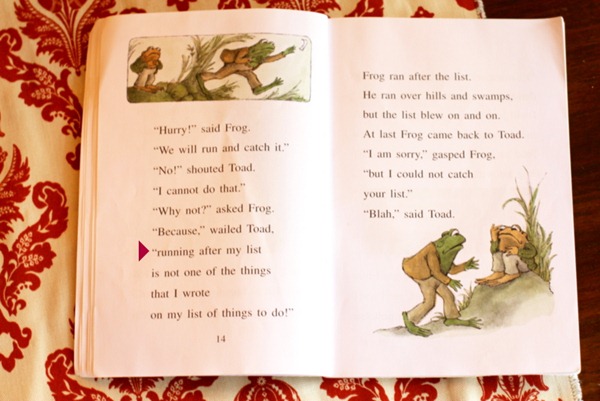 In fact, Toad is so neurotic about his lists that he actually make me feel a little bit better about my “issues.”

(Can you see what that part I drew the arrow to says?: “…running after my list is not one of the things that I wrote on my list of things to do!”)

Now that is one dedicated list-maker.

Oh, and just in case you’re wondering, I’ve been doing better with my own lists.

A la Toad (and many of your suggestions), I’m writing down even the little stuff and working in 1 or 2 non-essentials throughout each day (which sometimes still don’t get done), and it really is so invigorating to cross things off that list (even if it is just “brush my teeth” or “jump on trampoline with kids”).

In fact, one reader said that she loves checking off lists so much that the first thing she writes down on her list is “write list,” and then she checks it off.

So, am I any more productive than before?

But I’m coping, and I’m definitely more peaceful (the return to Bible reading helps with that a ton).

Speaking of coping, did you know that proper breathing is one of the best ways to cope with pain—whether it be emotional, psychological, physical, or otherwise?

If you’ve ever given birth and experienced any of the contractions naturally, then you probably do know all about breathing for pain management.

(Or maybe you preferred the quite-popular “screaming for pain management” method?)

In fact, since I plan to have LB4 at home with a midwife (which is what I did with #’s 2 and 3 as well), I’ll definitely be brushing up on my breathing over the next several months (starting now as I attempt to keep Simon from writing his 2’s backwards…yet…again).

And since it’s been a while since I’ve given you any fitness tips, I thought I might share something about breathing as it relates to exercise that you probably already know…

But just in case…

No matter what exercise you’re doing, parts of it are harder than others.

With weight-lifting it’s the upward movement of the bicep curl.

With boxing, it’s the punch out.

With running, it’s the moment when your foot contacts the pavement and shoves off for another step.

With pushups, it’s the push up.

You get the idea, right?

And you probably know that every single one of those activities requires oxygen—your heart, your brain, and your muscles all need it.

The next time you’re exercising (or maybe even just walking up the stairs), give it a try!

Once you get into a rhythm of breathing correctly, you’ll be amazed at how much more clear-headed and energetic you’ll feel.

So, there you have it folks!

A Move-it Monday update and a little tip to help you make it through your next workout (or toddler tantrum…it works for little tykes too, if you can get them to focus long enough to hear your “breath coaching”).

One of the things on my to do list for the last week or so has been to put together another Shop My Closet sale.

So, one of my Move-it Monday goals is to get all the pics I’ve taken edited and put into a post for you guys a little later on today.

I’ll announce on the Facebook page when it’s up and running, so be sure to stop by and check back!