For Move-it Monday, I’ve got some serious DIY eye-candy for you that’s bound to inspire you to get moving on your next project.

I mentioned on Friday when I showed you some of the details from my friend, Jolinda’s, baby shower, that I’d also be sharing some more photos of our hostess, Sheila’s, house. 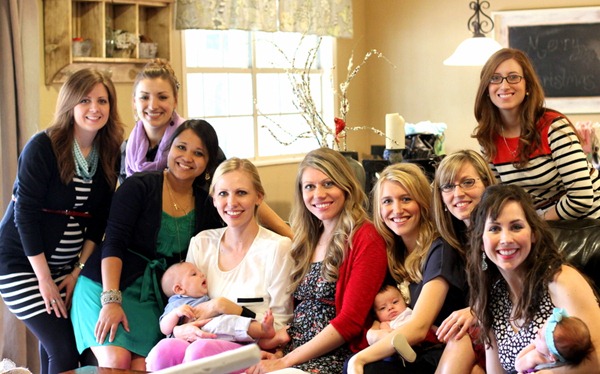 {There she is, third from the left}

When Sheila and her husband bought their home, it had already undergone a major renovation—new floors, new paint, a completely updated kitchen (with tricked out features like a double wall oven, a major range, a warming drawer, a wine fridge, and a double trash drawer…so jelly!), glass cloth wallpaper, and so on. 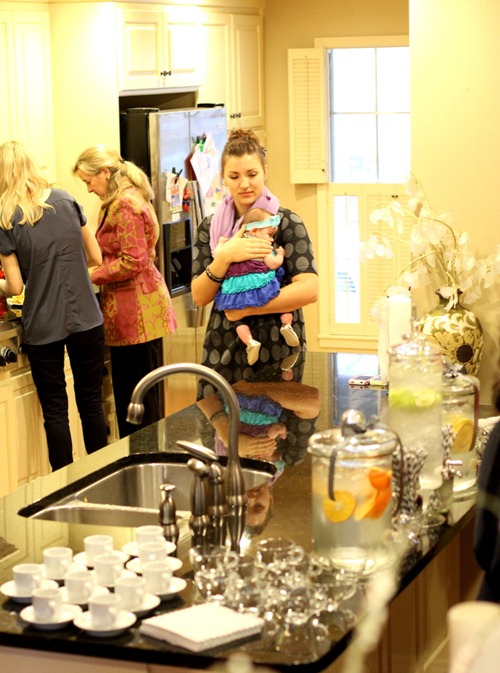 {As much as I love color, it’s hard to argue with the beauty of creamy cabinetry against dark granite}

Practically the only thing they changed was the color of the walls in the dining area.

But that didn’t stop Sheila from adding her own personal touches to an already lovely home. And best of all, she did it on a budget with the help of some serious DIY elbow grease.

Take, for example her buffet. 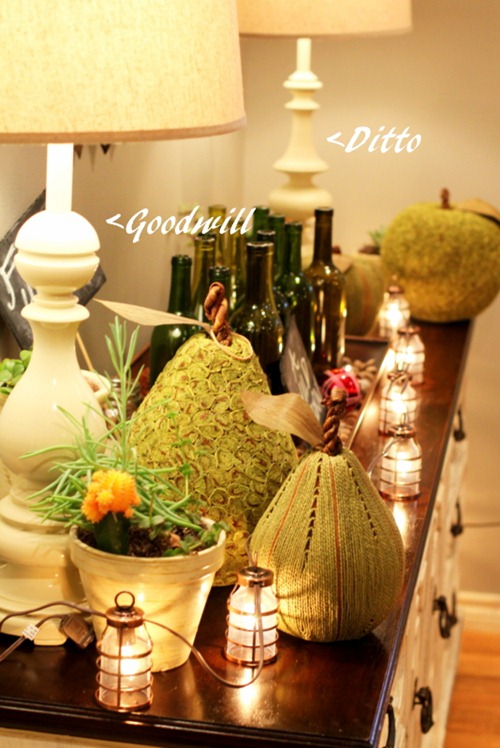 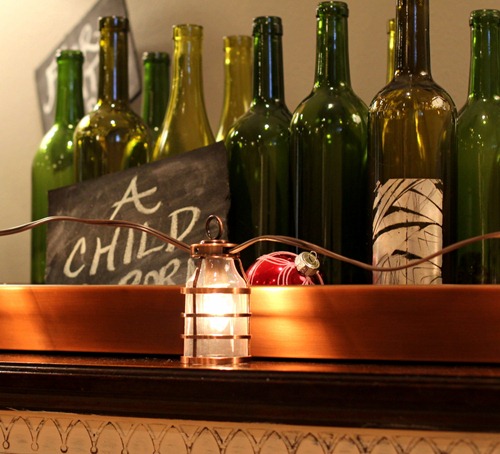 …and a simple, yet impactful, display of empty bottles corralled in a pretty tray. 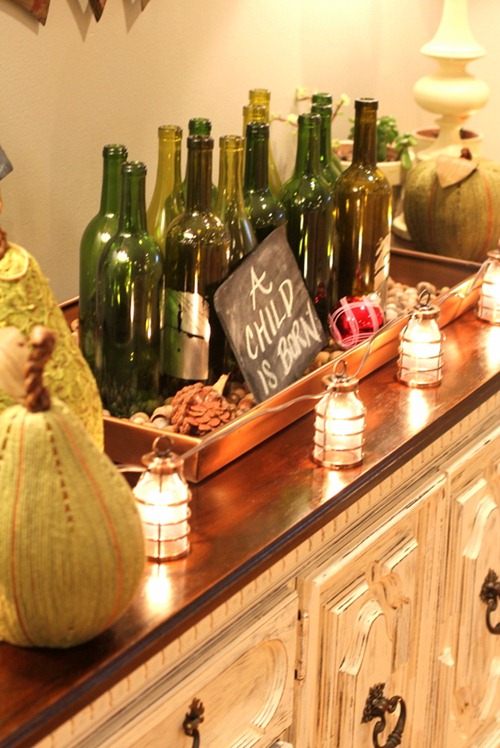 The buffet, itself, is a Goodwill find that got a distressed paint + stain treatment from Sheila. Nicely done, right?

And the DIY doesn’t stop there. 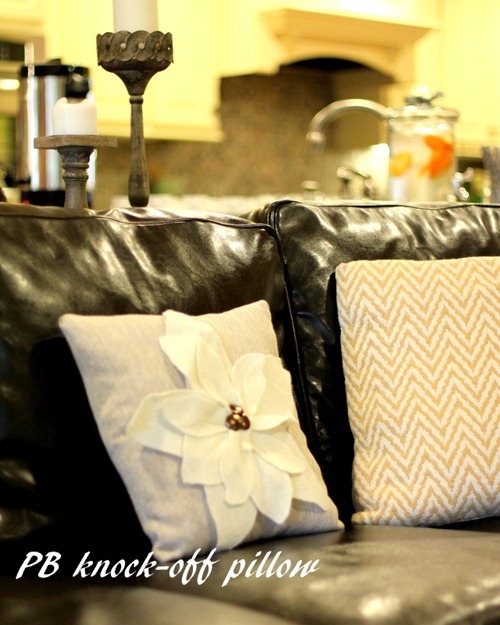 Sheila is a crafting and pillow-making queen, including that pretty Pottery Barn flower pillow knock-off (and the matching zig-zag one beside). She salvages most of her pillow forms from cheapies at Goodwill, and although she is admittedly a novice sewer who mostly uses straight lines and tackles simple projects, her creativity has made a major impact on her home’s décor—proof that you don’t have to spend a lot of money or have advanced seamstress skills to be your own interior designer. 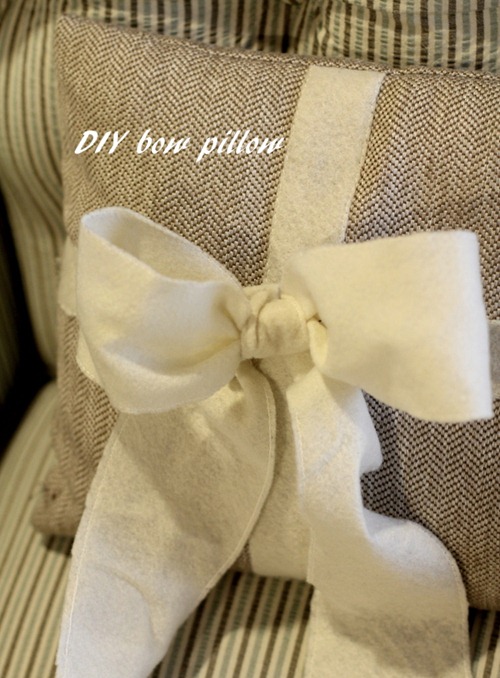 One of my favorite of her projects is this fun, DIY tassel tree (below). 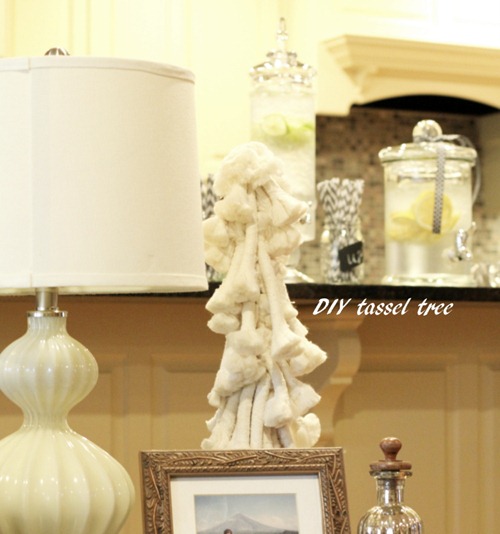 I do believe you will see this one on a Try-it Tuesday very soon. 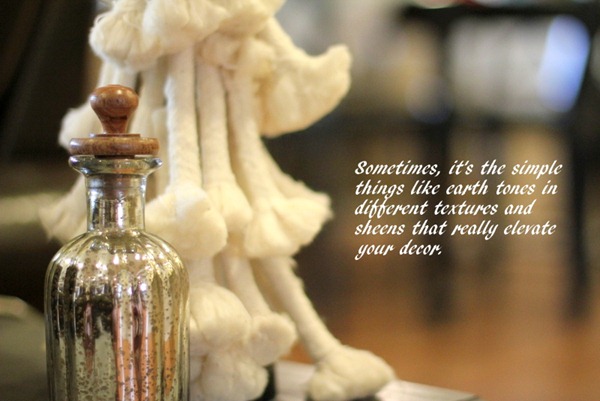 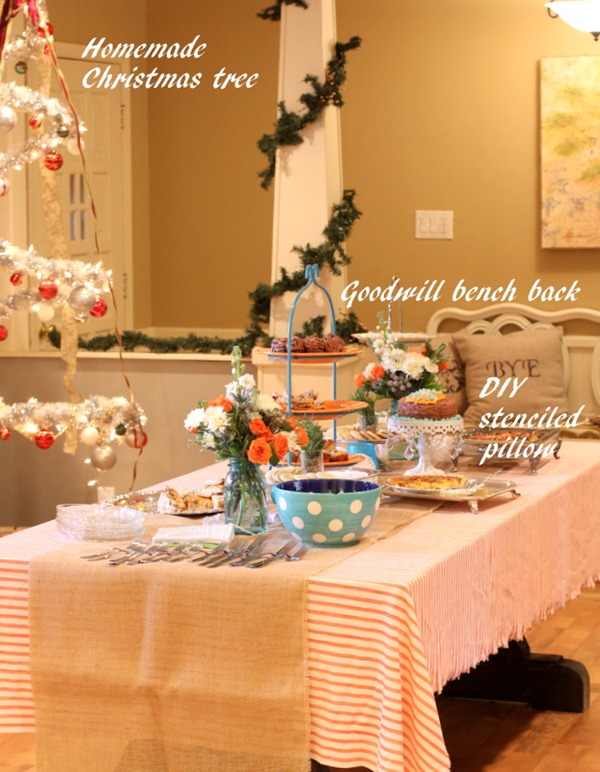 Another particularly cool touch is their DIY Christmas tree, which she and her husband made at a time when they didn’t have money for a fancier version and have used ever since. Honestly, for her house, I like it better. It’s unique and sparkly and just plain awesome! 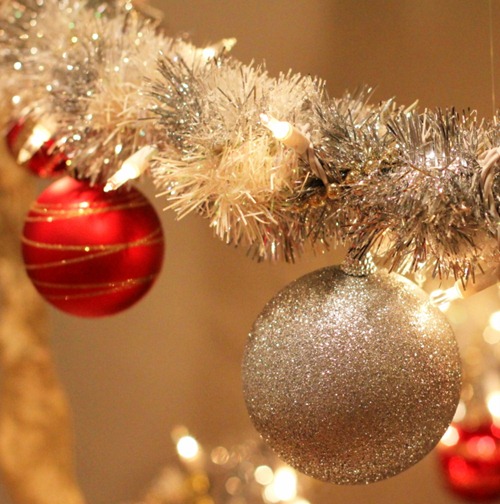 This gallery wall is another fantastic example of décor that is pretty and meaningful (love how she mixed in elements like the bird hook, the “family” sign, and the candle holder among the frames). 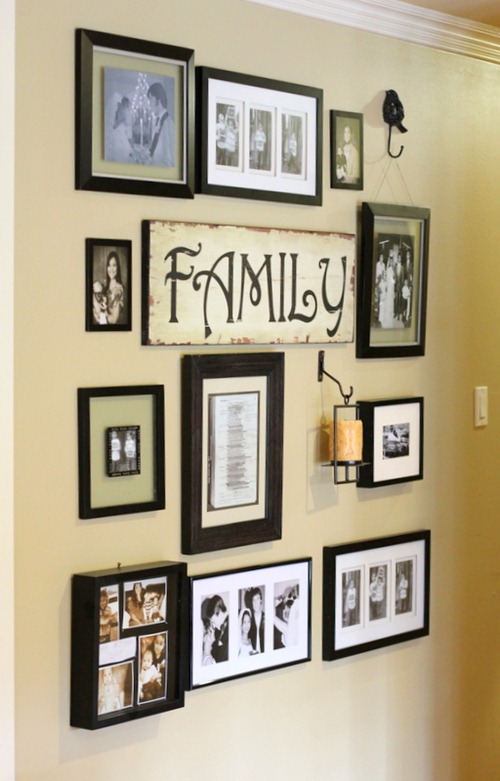 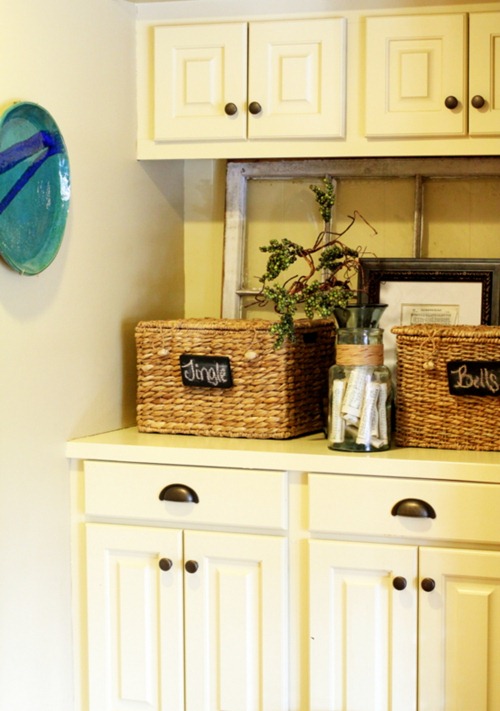 Built-ins are wonderful, but they’re even better when you add creative touches like old window frames, jute baskets, chalkboard signs, and vases filled with sheet music. 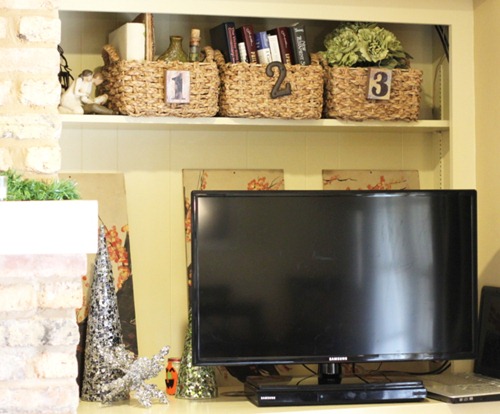 Even something as simple as mismatched numbers make basket storage for books and other knickknacks so much cuter.

Pretty much everywhere you turn in Sheila’s house, there’s something pretty to look at. 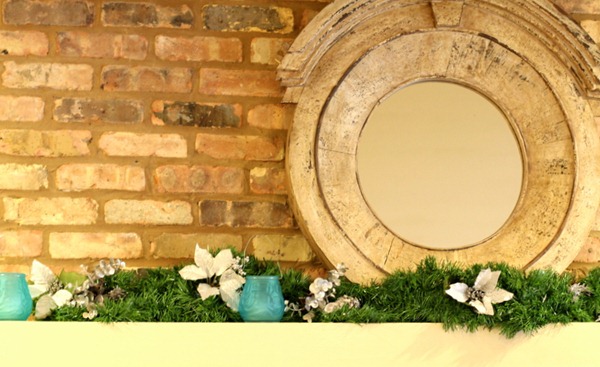 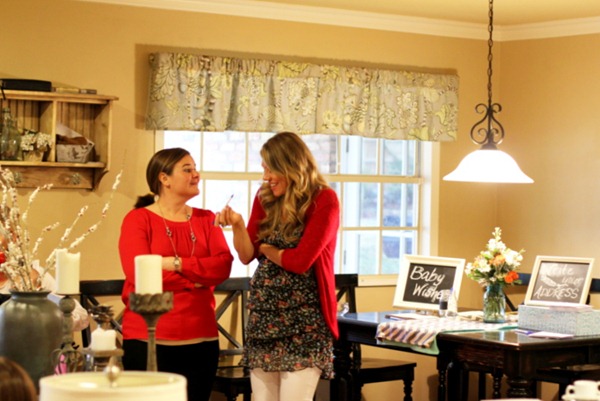 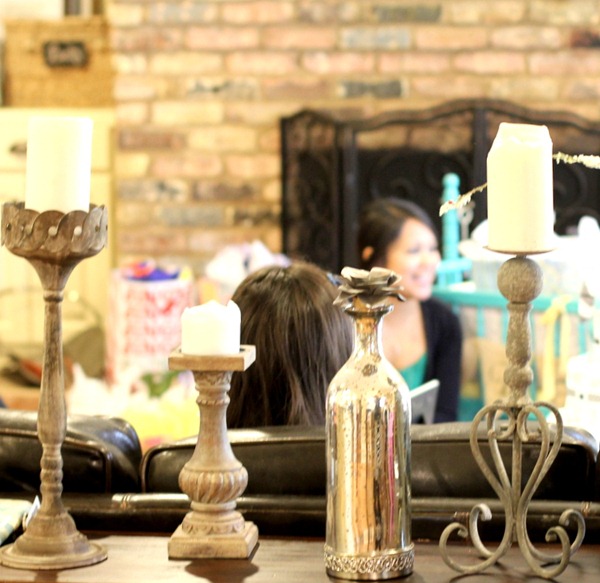 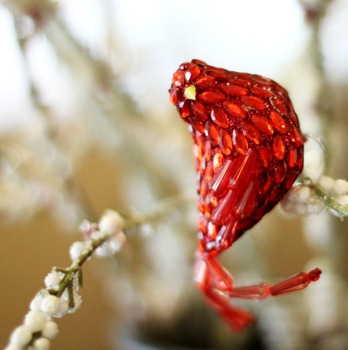 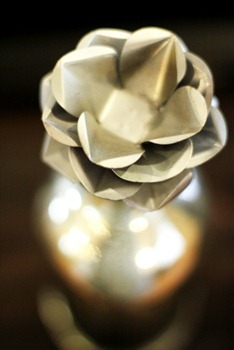 And, as much as she loves a good bargain, she also knows when to splurge on statement pieces, like this tufted overstuffed chair from Pier 1 that she used one year’s birthday money to buy. 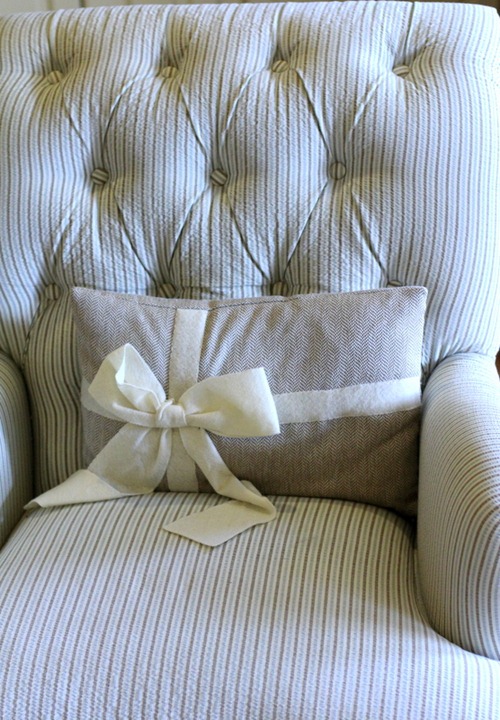 Isn’t Sheila’s house just a feast for the eyes?

And here’s my most favorite part of all!

In the course of my asking her questions about this and that and discovering that she was a thrifting, Goodwilling girl after my own heart, Sheila mentioned that she had never even considered going to Goodwill before she met Jolinda—instead constraining most of her bargain-hunting to deal-friendly stores like Ross and Home Goods.

But Jolinda converted her.

And do you know who converted Jolinda?

Yep, that’s right. Yours truly! (With the help of Mandy, whom I also convinced to give Goodwill a chance).

So…that sort of, kind of, in a round about way, means that I helped Sheila get obsessed with thrifting, which, in turn, probably saved her a wad of decorating cash.

And that makes me just plain happy!

And now I really must stop jabbering about all the cool stuff that somebody else has made and attempt to finish something on my own list.

Time to get a move on!