So sorry about the sporadic posting and the lack of a linky party last week. Last Friday was Ezra’s birthday, and it pretty much came down to: finish my linky party post and be late getting out the door for his birthday breakfast or skip the post and go celebrate (I guess you know which won).

I’m still trying to figure out how he got from this tiny thing: 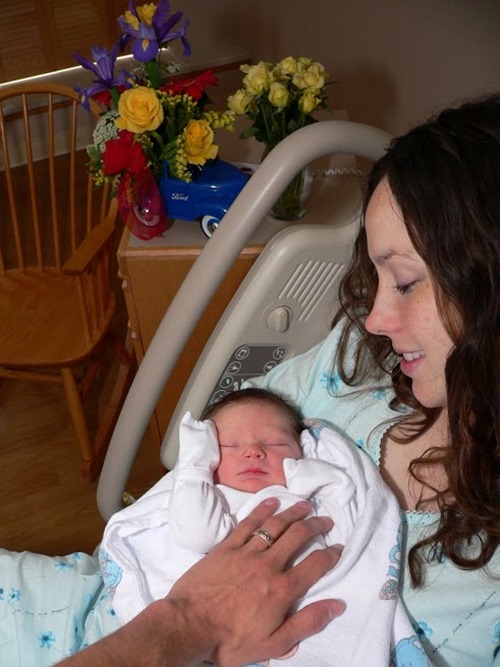 to this handsome big kid: 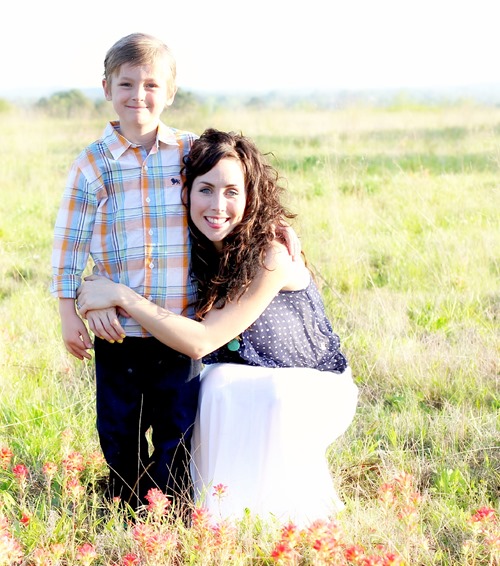 It’s all going by waaaaay too quickly. But that’s another post all its own, and I don’t have time to break down blubbering right now, so I’m moving on to the topic du jour, which is: 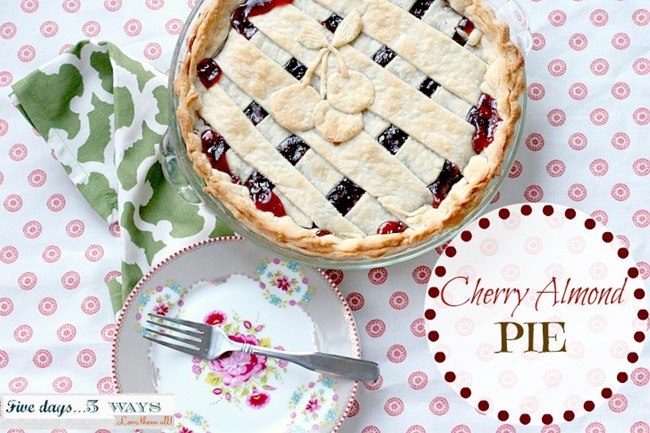 Growing up, I always said that my favorite fruit was “black cherries.” I really did like them, but mostly, it just sounded cool. Different. Exotic.

Now, 20 years later, I’m pretty sure I’ve never even eaten a black cherry, since what I was such a big fan of as a kid was undoubtedly Bing cherries (they looked black to me!).

But I still have a thing for that sweet + tangy burst of juice on my tongue, which is why I foolishly bought a huge bag on a whim when they were “on sale” (code: still not cheap) at the local grocery store.

Unfortunately, most of them were duds on their own. But I wasn’t about to chuck a $14 bag of cherries, so I decided to try my hand at my first ever classic cherry pie. 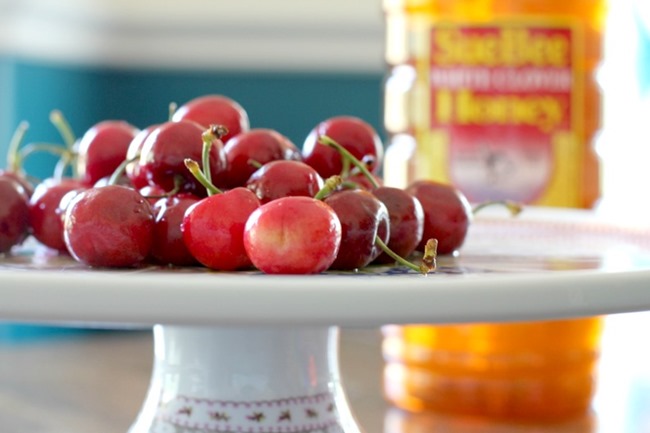 {They look so deceptively pretty, but they were sadly lacking in flavor}

I started with about 4 cups of pitted cherries (my nails looked like I had been doing some serious gardening by the time I got done with that process) and then made a honey-based filling with just a splash of something different to give it a special kick.

Here’s what you’ll need for the filling: 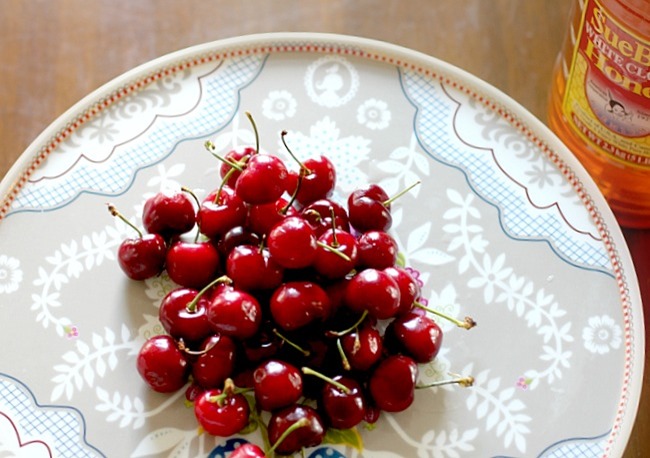 Place pitted cherries + 1 cup of water (you can always add the rest later if your sauce is too thick) in a large saucepan over medium heat. Cook, stirring occasionally, and making sure to smoosh your cherries in order to release their juices until the mixture is heated through and the water is red.

Add 3/4 cup of honey + 1/2 tsp of almond extract. Raise heat and continue stirring/smooshing occasionally until the mixture comes to a boil. Boil for 3-5 minutes, then lower heat to medium/low.

Mix 4 tbsp cornstarch with 4 tbsp cool water and then add slowly to hot cherry filling, stirring constantly to keep the cornstarch from clumping.  Continue stirring until mixture thickens (it should be the consistency of thin pudding).

At this point, you’ll want to taste test everything to see if you need the remaining honey, water, or cornstarch.

Note: because I had never broken whole cherries down into a filling before, I was surprised at how long this whole process took. But I think If I had brought everything to a boil sooner, the cherries would have softened more quickly (the instructions that I’ve given here reflect that learned lesson, but I didn’t include times since I don’t know exactly how long it will take on your stove). 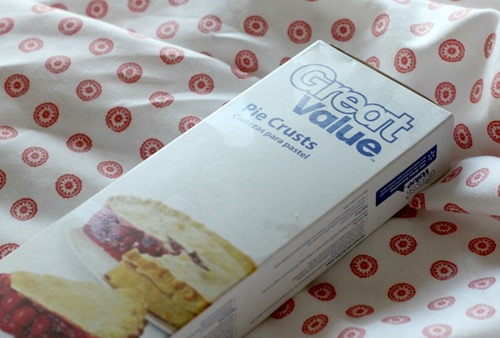 As I mentioned earlier, I chose to go super-easy with the crust because there were little people waiting on Mama’s much-anticipated Chewwy Pie, and they weren’t going to be the least bit impressed with a homemade crust.

If you’re using the boxed variety, which comes with two, press one crust into the bottom of your pie plate and prick generously with a fork. Then, roll the second crust out a bit thinner than the bottom crust and cut it into strips for the “lattice” top. (Or you can just plop it on top, cut some slits, and throw it in the oven; that works too). 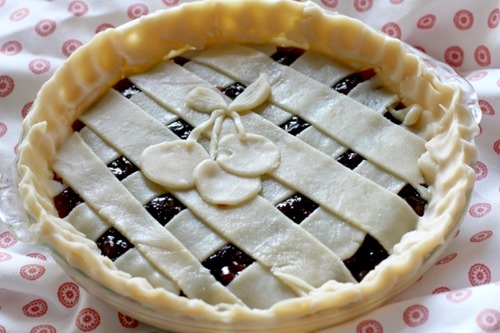 As you can see, I didn’t bother to measure the slats of my lattice. I just eyeballed them and then slapped them on there. I still had some leftover dough, so I decided to get a little fancy with a design on the surface. I made the dough cherries by pressing a juice bottle lid into the dough for circles and then free-handing the stem + leaves.

I still had dough left, so I pressed all of the excess into the edges and pinched it down with my fingers to create a pretty, wavy lip all around the pie’s edge.

Cook your pie at 450 °F for approximately 20 minutes (I set my timer for 15 minutes and then kept an eye on it until the edges were golden brown). 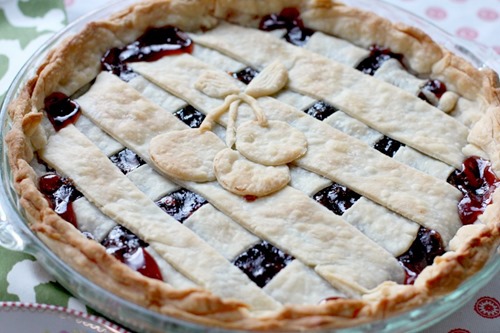 Make sure you let everything cool a little before digging in (that filling is like molten lava when you first pull it out of the oven!).

And then serve it up on the fanciest china you’ve got! 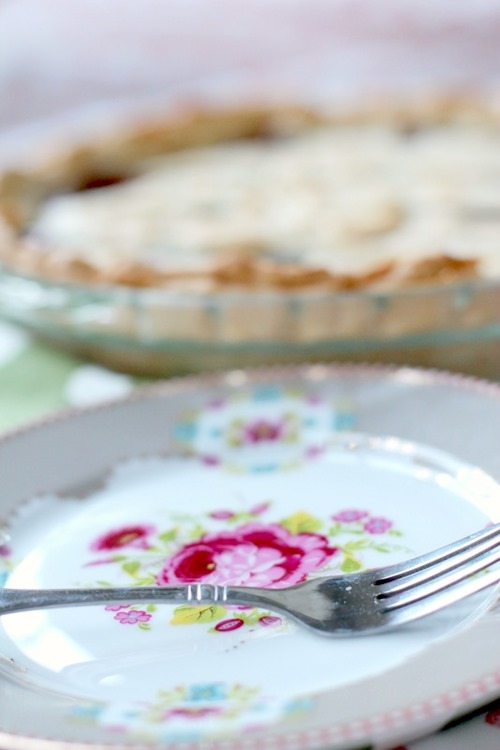 {Just make sure the fork you grab out of the drawer for pictures is actually clean; insert sheepish chuckle}

Oh, and I was totally kidding about that fancy china bit. If I hadn’t been so busy stuffing my face and trying to keep the kids from burning their tongues or accidentally dumping their plastic-bowls-of-pie on the ground, I would have taken a picture to prove to you that all this pretty nonsense is just that: nonsense. It was fun to spend a little of my Memorial Day making a fancier pie than I normally would, but in the end, it got the same treatment that all the food in our house gets—which consists of glopping it on something coated in primary colors and shoveling it in with gusto.

A couple of quick notes:

This pie was yummy, and I like that it was sweetened entirely with honey, but you can definitely substitute white sugar if you want.

Also, although we didn’t have any, this pie would have been divine with vanilla ice cream (preferably Blue Bell’s homemade vanilla if you can get your hands on it).

So, tell me: are you a pie-eater? What’s your favorite?

Also, if you have a killer from-scratch crust recipe I WANT IT! (I’ve never found one that was awesome enough for me to call it my “go-to” recipe).

Oh! And what was your favorite fruit as a child? Has it changed as you’ve gotten older? (I still love me some cherries—although the Rainier variety has since eclipsed Bings—but in terms of what I eat most, really good watermelon now tops my list).