Last Saturday, I had a fun birthday lunch out with girlfriends. That’s one of the “perks” of having kids and friends who have them too. We’re all so busy that we’re rarely able to coordinate our schedules on, or in some cases all that near, our actual birthdays…which means that we get to stretch our festivities out for at least a week.

Sadly, I have no photographic evidence of our gathering. Well, no evidence of the human kind (unless you count my friend, Jolinda’s, hand). I did snap a quick pic of these crazy-cute little pumpculants (see how I did that there?) though, which I totally want to knock-off now. 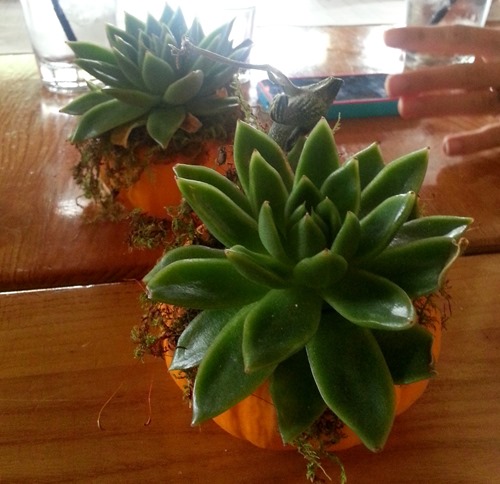 After some absolutely scrumptious vittles (yes, I’m a Southerner), I headed to the LOFT to spend a little birthday dough. While there, I snapped quick pics of my finds and posted them to Instagram and Facebook so I could get some real-time votes on what I should buy.

In other words, I was encouraging a mob mentality (see how I worked that title post right in there?).

You know me—pretty much everything was under $20, most of it way under.

I thought I’d show you guys the options, but first up, here’s what I wore there: 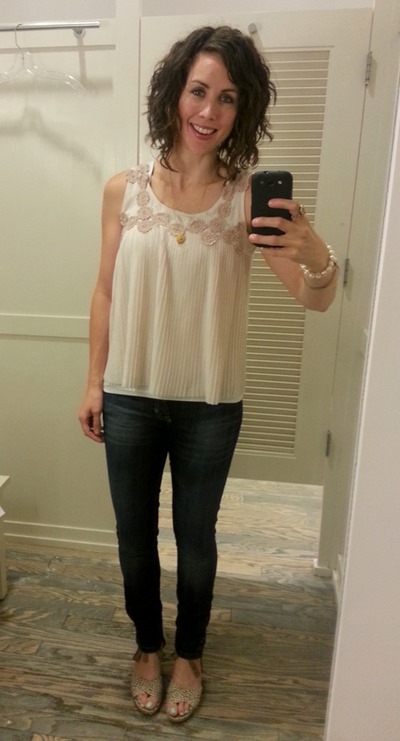 1) If my giant forehead pimple is a source of distraction for you during this post, I apologize. I did my best to minimize her with concealer, but she was pretty insistent on making her presence known. Thank goodness for grainy cell phone pics. Maybe we should just name her and get that out of the way. So, yeah. Mildred, it is. 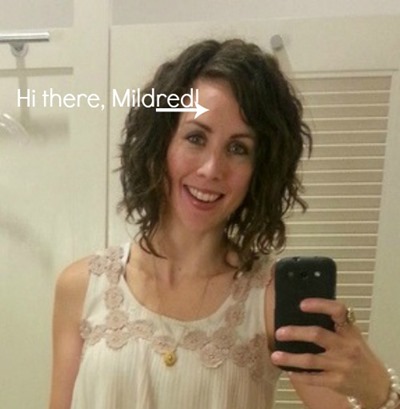 2) I feel like I’ve already said this before, but…LOFT mirrors are R.I.D.I.C.U.L.O.U.S.  My friends and I like to bemoan the things their deceptively “skinny” reflections have made us take home (and then return).

So, here’s a piece of free advice. If you try on something that’s normally not your thing, and you find yourself thinking: “Well, hey there, good-lookin’”…keep your receipt. You’ll be back.

Of course, then there are Old Navy’s mirrors, which have the opposite effect. Which is to say that if you find something you look great in in an Old Navy mirror, buy it. It’s wardrobe gold.

First up, I posted this orange top with lace crochet at the shoulders. 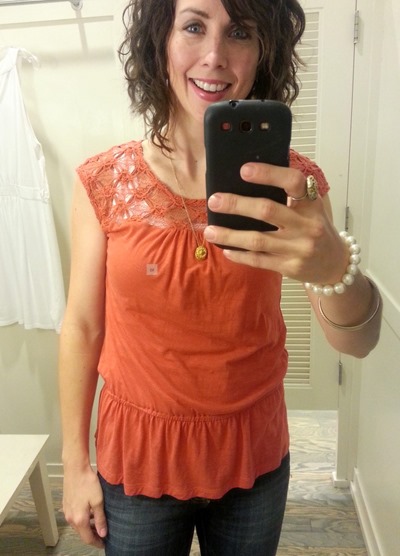 It got mixed reviews with some folks declaring an immediate LIKE and others feeling a bit more “meh” about it. 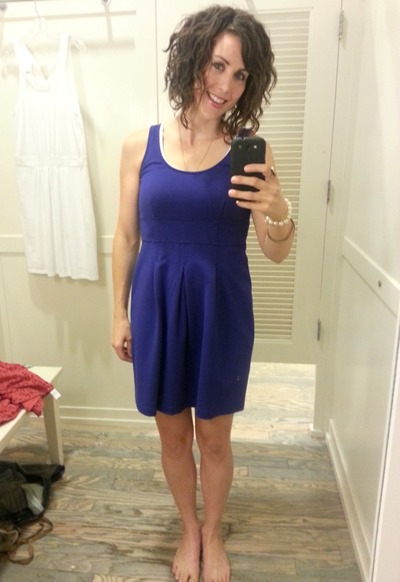 Next up was this too-short number (more on that tomorrow) for $5, which debuted to generally good reviews. 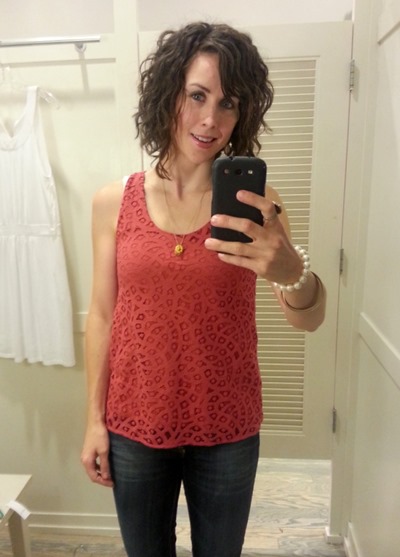 This pretty rose-colored lace top also got a thumbs-up from most of the voters. 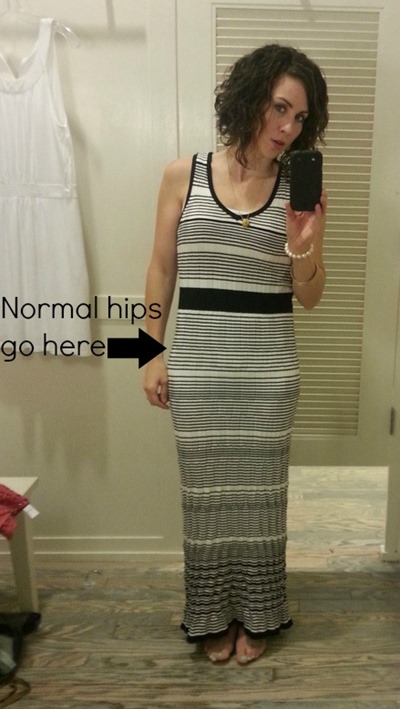 This dress, however, was universally panned. I honestly knew I wasn’t interested the moment I tried it on. It was too clingy and stripey. Also? It only emphasizes something I already know and that is that I am really long-waisted, and my hips start like 3/4 of the way down my body. And yet, I posted it, for the sake of conversation. And boy, did I get a conversation going!

I didn’t actually post this next one because it was two sizes too big, and I knew I would get a lot of comments on the saggy fit, but I already had an easy fix in mind and knew that, at $5, it would be a great layering piece. 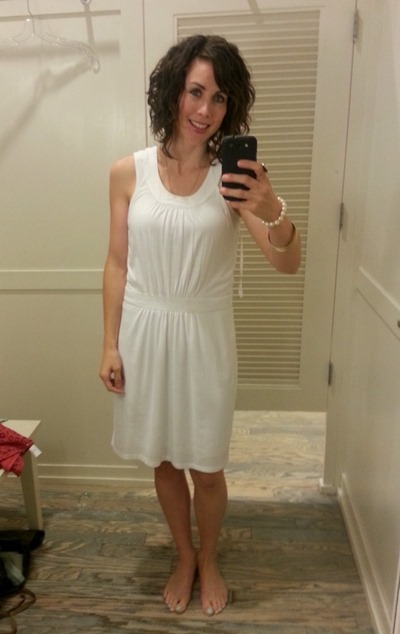 I didn’t post this next one either because I had already flooded everybody’s stream enough but also because it was $25, even on sale + an extra 50% off. I can’t deny that I love it, though. 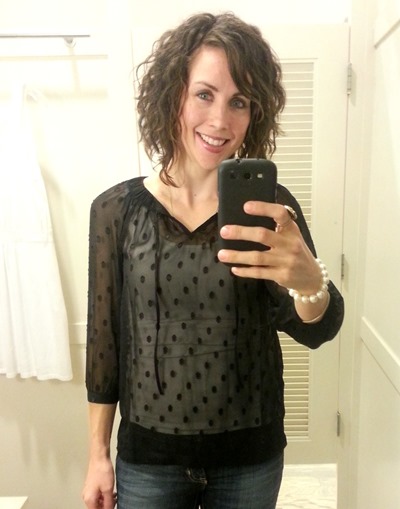 Oh, and then there was this one: 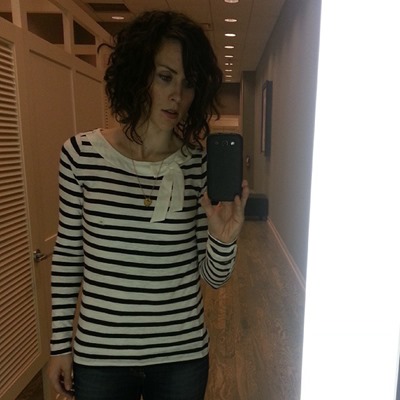 …which, at $17, I wasn’t sure about. But it received rave reviews and even a request from my friend Liz for me to buy it for her so she could pay me back. She commented again with, “I’m serious,” so I wouldn’t miss her meaning. Got it, Liz. 🙂

So, there you have it—another round of “real-time” (at the time anyway) shopping at the LOFT.

And now it’s time for you to weigh in and tell me what you think.

Which looks did I buy (or should I have bought)? (Yes, I still have my receipt).

Anybody else want to sign a petition to God for a moratorium on grown-woman acne? C’mon, now. It’s bad enough that you have to have it as a teenager. But zits at 31? Ain’t nobody got time for that. (I’m also taking any and all sworn-by skin care product suggestions under advisement).

Linking up at The Pleated Poppy