I like to eat. Nope. Wait. Let me revise that statement. I love to eat.

Over ten years ago, though, I got into the habit of counting calories, and now I have a running tally in my head pretty much all the time, whether I want it or not. Don’t get me wrong—it’s not such a bad thing to have a general idea of how much, ahem, energy (Snickers count as energy, right?) your body is consuming vs. how much it actually needs. But obsessing over it is an entirely different matter.

Thank the Lord I’ve been able to break free of the obsession in the past several years, but that won’t erase facts like: 3 Mint Oreos = 170 calories from my brain.

I have, however, learned a little trick that has served me well when we travel. Knowing that we will be eating out for most of our meals (sometimes, we cook if we rent a place with a kitchen), I deliberately switch off the calorie-counting portion of brain. And I ask God to help me do it.

Even so, I find myself adding up lunch and dinner before I even quite realize what I’m doing sometimes. But as soon as I do, I force my brain in another direction (thinking about what I want for dessert usually does the trick! :)).

I do not want even something as beneficial as healthy eating to make me its slave or to make my husband feel bad if I bemoan the caloric content of the meal we just enjoyed.

Truth be told, I’m getting frighteningly good at turning that part of my brain off, as you’ll be able to see from the sheer caloric volume of the food we ingested while in New York City.

I’ve definitely noticed that my pants are a bit tighter this week. But you know what? That’s okay. I’ve even managed to avoid the “F word” (I haven’t used it once as a derogatory term since I wrote that post). I didn’t exercise one bit (other than walking) for an entire week, and I ate whatever I wanted whenever I wanted it. And it was heavenly. 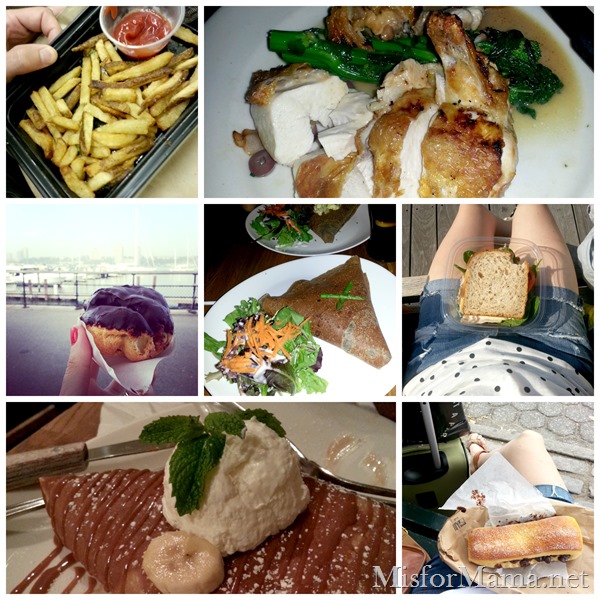 From top left, going clockwise: truffle fries + roasted chicken and broccoli rabe from COTTA. The turkey pesto sandwich from the rooftop cafe at the Metropolitan Museum of Art. Chocolate chip brioche from Levain Bakery. The Dulce de Leche Crepe from Crepes Du Nord (plus the Chicken Asparagus and Farmer’s savory crepes there in the center), and a chocolate éclair cream puff from Beard Papa.

This doesn’t even begin to make up the sum of all our meals (it’s just what I remembered to snap a quick pic of).

We also ate really good Thai food (our favorite Asian food) at Thai Market, and, of course, indulged in a New York slice (or four, in my husband’s case).

Here he is, waiting to cross the street, holding his box of New York pizza, and looking fine, if I do say so myself. 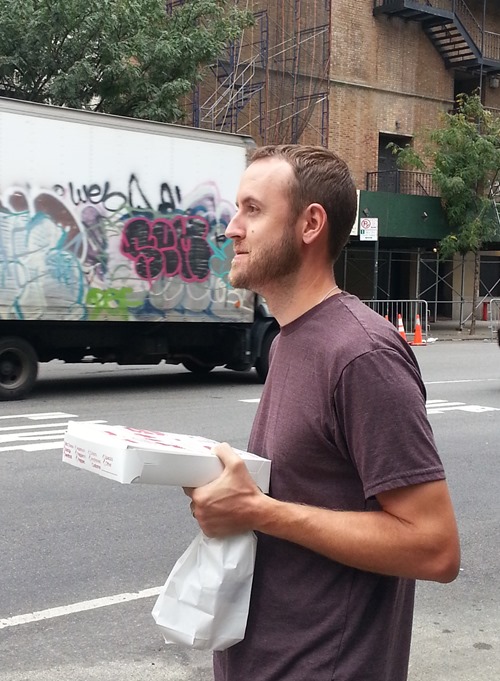 And here’s my slice after I’d already dabbed a bunch of grease off. So good but so bad! 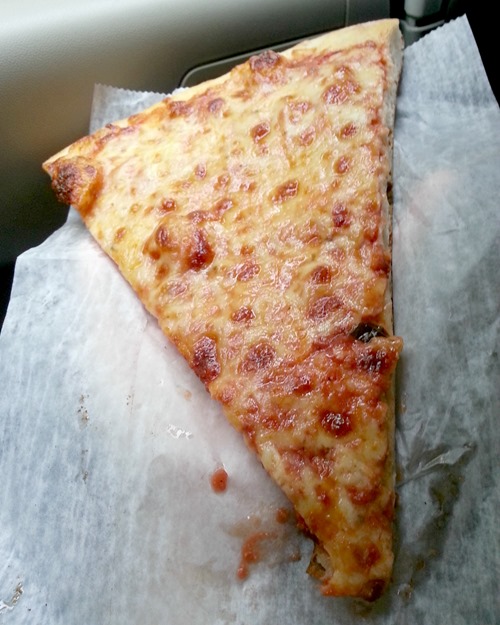 Another iconic stop was Junior’s off of Times Square where we scarfed some post-Motown the Musical dessert. 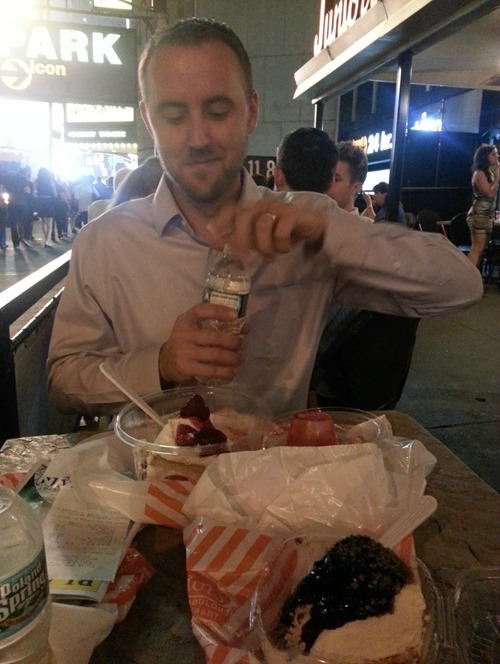 {See that little smile? He had just realized I was taking a picture and was trying to play it cool, but I knew better}

But wait! I haven’t even gotten to the pièce de résistance of our culinary adventures. 7 years ago, on a one-day, lightning fast trip into the city as part of a longer trip, Shaun, my brother, and I went on a food tour of Greenwich village. And it was so much fun (and sooooo yummy).

We liked it so much that we decided to book another tour with the same company (Foods of New York).  This one was the Central Greenwich Village and a bit of SoHo tour, and it was just as interesting and delicious as the first one.

If you’re confused about what the tour entails, it basically involves walking through a particular New York neighborhood with a guide who tells you about the history of the location/architecture/food as well as some fascinating tidbits like the fact that Al Pacino filmed a coffee commercial that was only ever shown in Australia at the cafe where we had our first tasting. Or that Monte’s (where we had the best spaghetti bolognese either of us had ever experienced)—a New York staple for 100 years—is where Chandler takes an annoying date in an episode of Friends.

The restaurants know you’re coming, of course, and they prepare portions of their signature dishes for you to sample. But the portions are pretty generous, and there was extra every time for our group of 14 or so, which meant seconds if you really wanted them. We were all stuffed by the end. 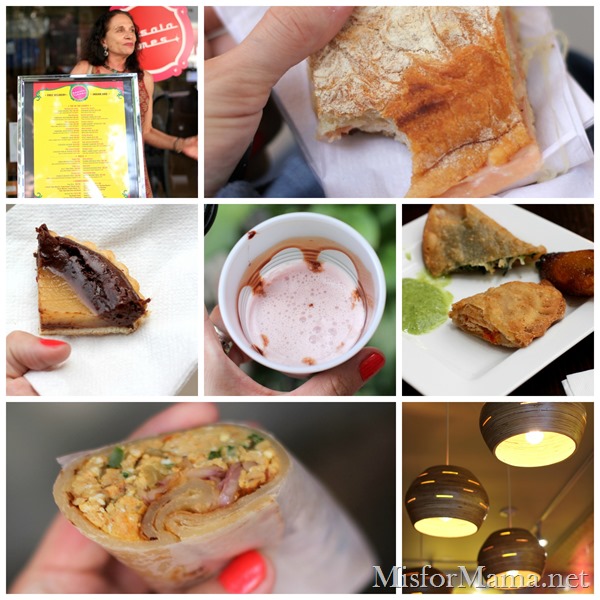 That’s our guide, Susan, who was so friendly, articulate, and knowledgeable there in the top left corner. The rest of the pics give you a pretty good idea of the different foods we tried—everything from a glorified ham and cheese (although much fancier) sandwich to Cuban empanadas to an Indian wrap stuffed with scrambled eggs, veggies, and cheese (and make-you-cry spices, of course) to a grape milkshake and a pear and chocolate tart.

I would tell you the name of each stop…but I was too busy listening and eating to write them all down.

I will say that it was a fascinating, super-tasty experience. I highly recommend doing a walking/food tour if you find yourself in NYC with 3 hours to spare.

Hope you enjoyed my version of a NYC food tour. I could really go for a cannoli about now.

P.S. Just because I’m doing 31 Days of M does not mean that I’ve forgotten about Project Elephant. I’ll be doing an update this Monday, so grab your cell phone and snap some pics of a project you’ve made progress on so we can all share on Monday, okay?