Remember that Family Command Center I was contemplating? 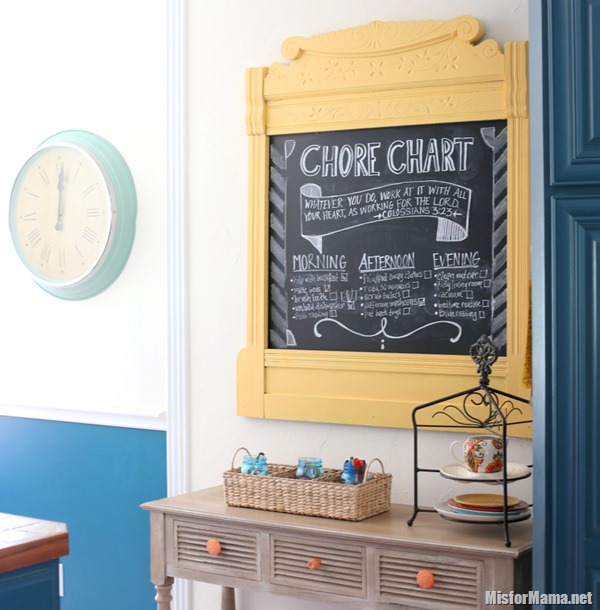 To start, I hauled that big yellow chalkboard I mentioned downstairs and wrote out a simple chore list for the boys (and Della too, when the task applies), plus an appropriately inspiring verse to help encourage good attitudes while they work.

Most of the items on the list are daily, but a few will only happen a twice a week or so(trash, toilets, etc). 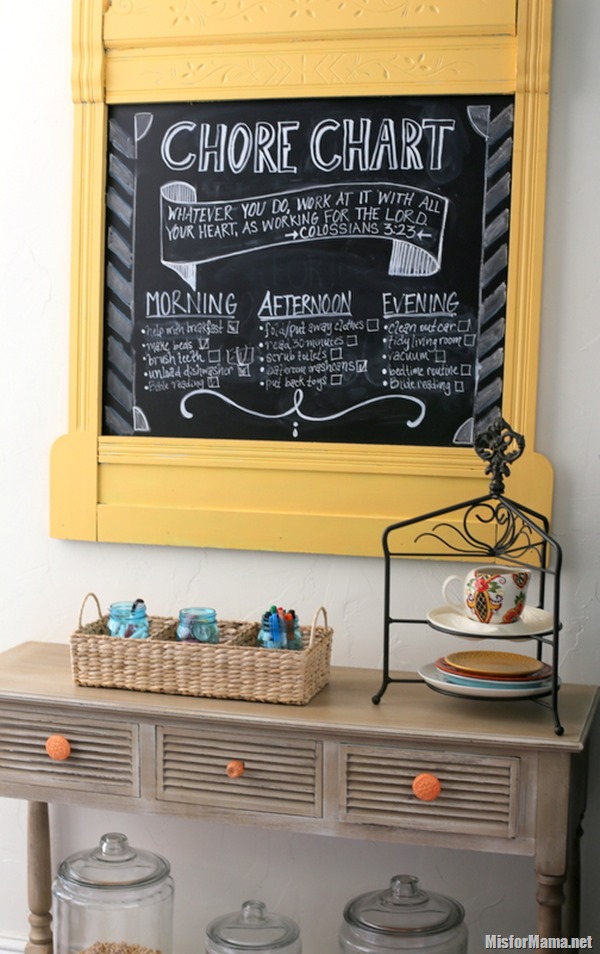 If it’s a rotating chore (like who empties the dishwasher as opposed to who loads it), each week, the person in charge of it will write his initial beside the check he writes in the box next to the task (the boxes are written in chalk pen, but they write their checks with regular chalk, which wipes off easily with a dry rag without disturbing the chalk pen, which requires a moist rag for removal. All of which means that I don’t have to rewrite my boxes every day).

To replace the ugly whiteboard fridge calendar, I bought a large (pretty!) paper version on clearance ($4) from Target, which I adhered to the side of the tall cabinet with sticky tack.
Ditto for the corkboard, which came from Wal-mart (2-pack for $8) and to which I added a border of burlap polka dot ribbon because…why not? 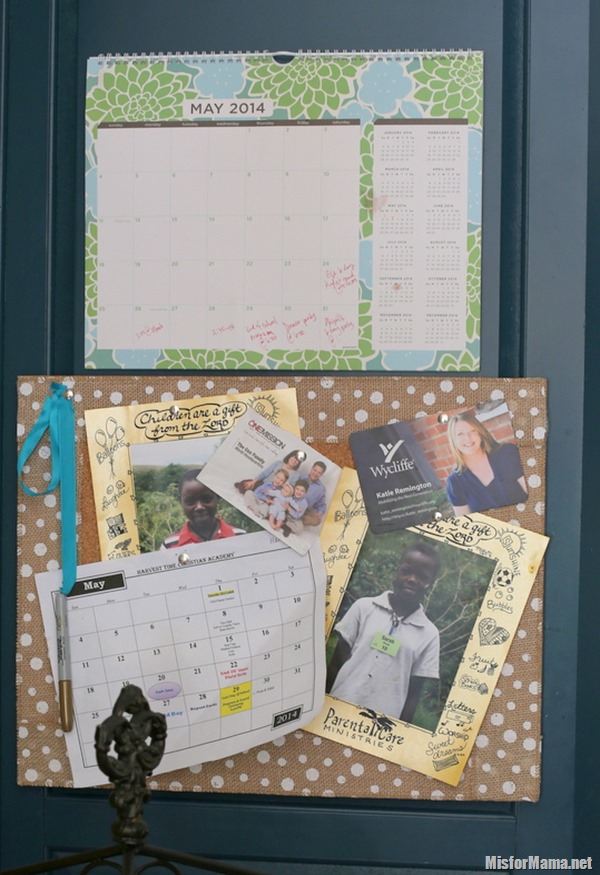 {CONFESSION: that sticky tack business was a big fat FAIL It started out okay, but after a while, it simply would not hold either the calendar or the corkboard to the side of the cabinet, even after I applied approximately 78 pieces to a 1 square foot area; I’m going to have to regroup there} 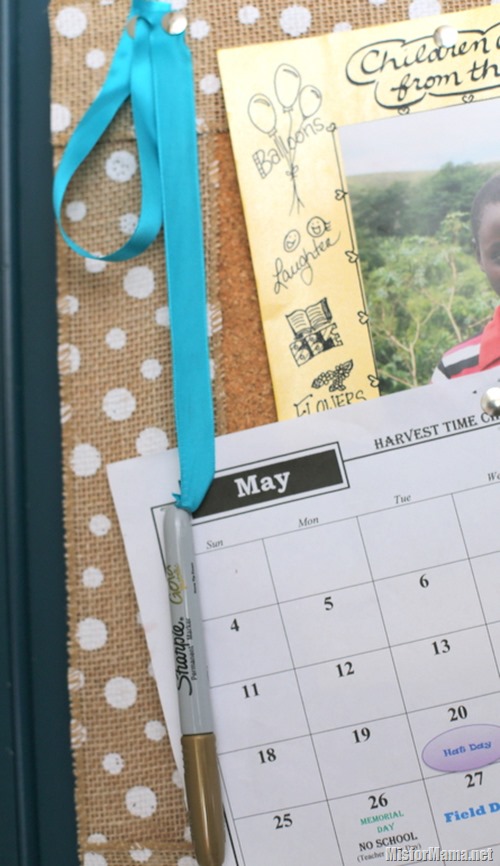 …and then I added a basket full of  “essentials” (washi tape is an essential, right?) to the console table to make it easier for the boys to check off their chore lists and for me to keep up with important calendar info. 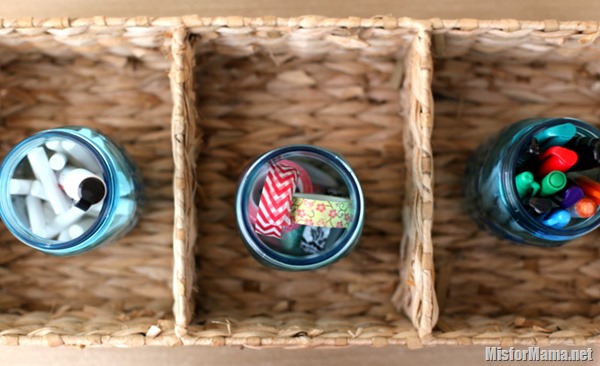 Last, but certainly not least,  I found a spot for an IKEA clock that I bought because of the color (sea foam green and aqua are pretty much BFF’s, after all) even though I wasn’t sure where it would go. Now I am! 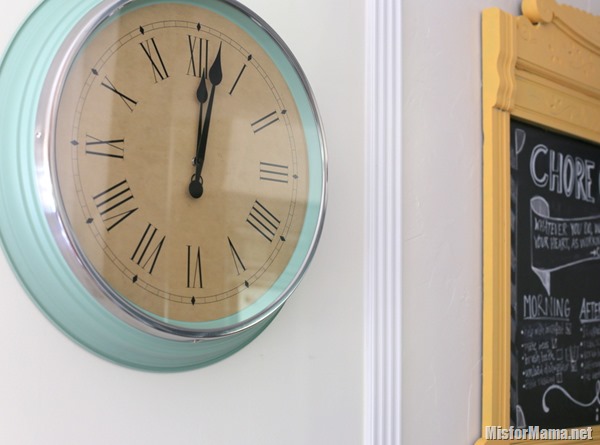 All in all, this corner feels so much more fun and cheerful and—best of all—useful than it did before. The boys are already loving using it to remind themselves of their chores and—the best part—to check them off. 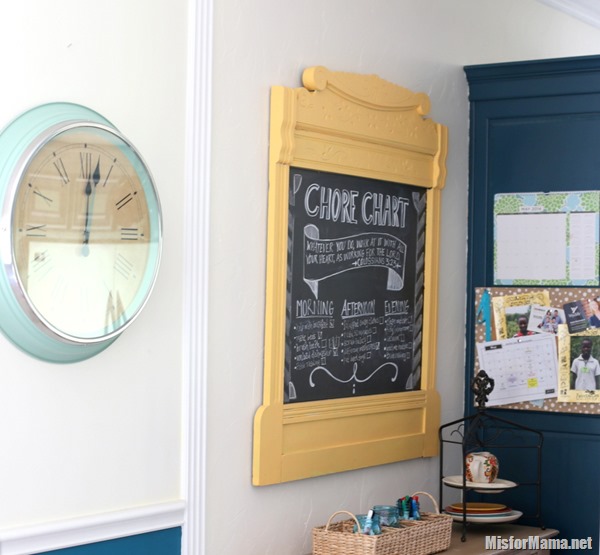 Of course, with a new calendar system currently sitting on the table because it won’t adhere to the wall in place,  you might assume that I did something different with the cluttered fridge situation. (Which you can see here).

And you would be right! But you’ll have to wait until later on this week to see it.

Anybody want to take bets on how much use our new set up will get? I’m feeling hopeful, simply because I kept things so very simple and straightforward. If I’d made it more complex, I can guarantee you we would  have failed miserably.

Anybody want to help a girl out and suggest a brilliant non-paint-damaging solution for getting the calendar + corkboard to stay put? I’d rather not use nails or tacks of any kind.