Well, you guys are a convincing bunch. After so many of you responded to Wednesday’s anti-maternity wear post by extolling the virtues of maternity clothes (although, I think we all agreed that jeans are pretty problematic), I decided that I had been too hasty in my judgments and set out on an online quest to discover preggo-wear that would change my mind.

My first stops? GAP and Old Navy, which both boast an impressive selection of…BLAH.

Seriously, this is what first met my eye when I clicked on the “maternity” tab. 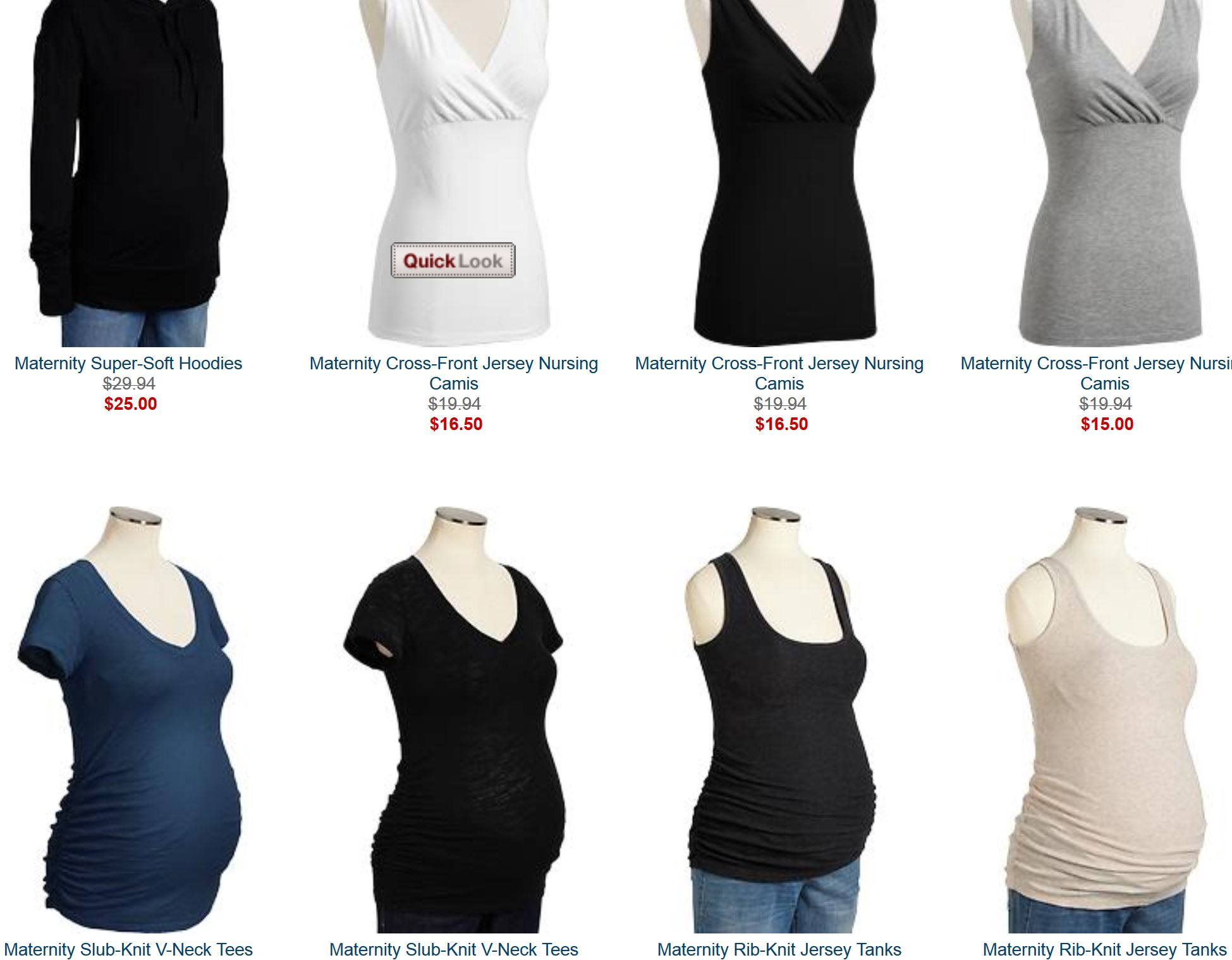 That’s what Old Navy thinks you should wear if you’re pregnant, apparently. 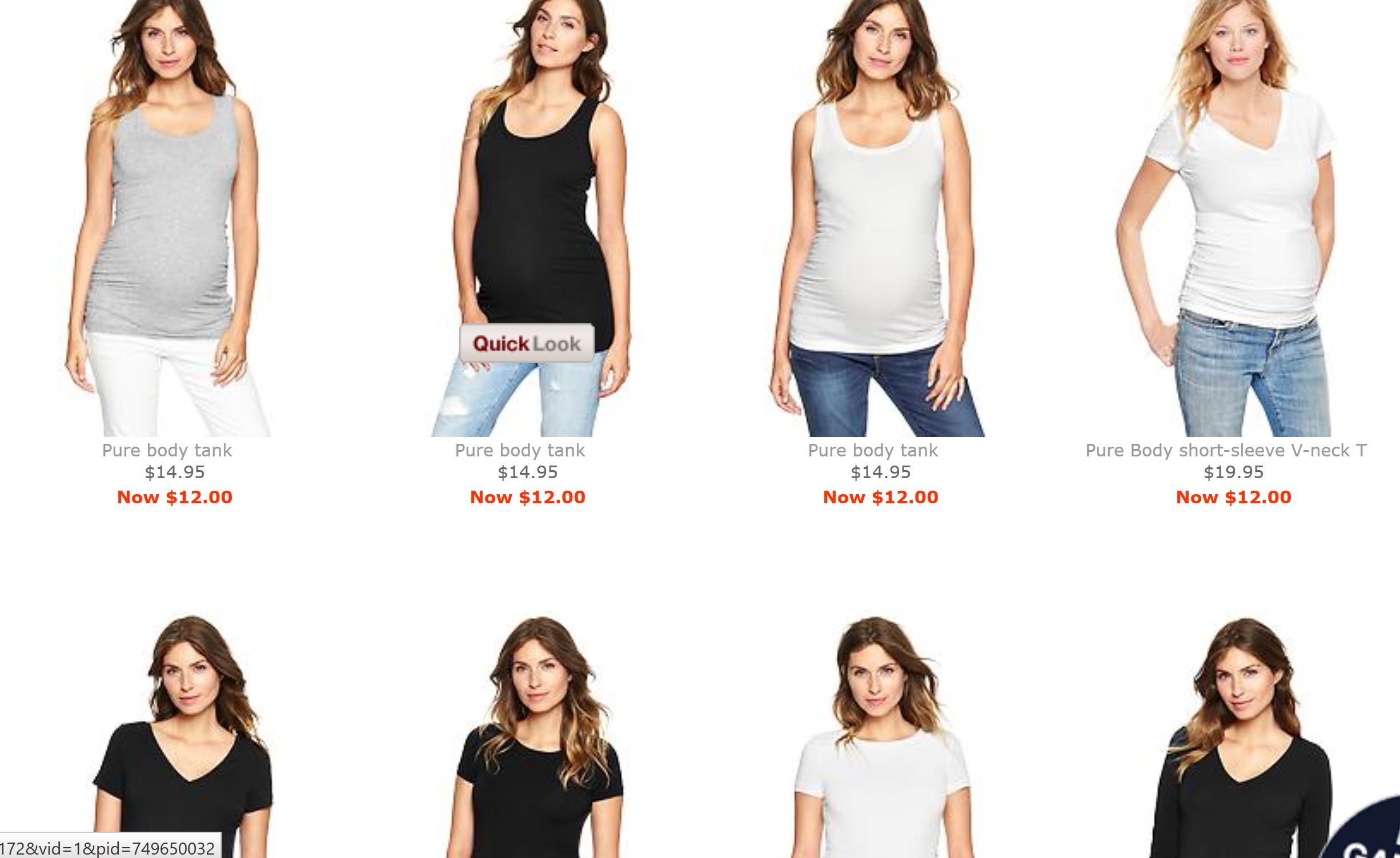 And it would seem that GAP heartily concurs.

I, however, do not want to spend my entire pregnancy boring my baby to death (because he so cares what’s on the fabric above his head).

So, I dug a little deeper. I checked out Target, LOFT (had no idea they had maternity; am now convinced I didn’t need to know), Motherhood, Pea in a Pod, Pink Blush, H&M, and anybody else I could come up with. I found some decent options, but I think paying $45 for a shirt that claims to be maternity but is really just a baby-doll top is ridiculous.

But then, I finally hit the jackpot of all affordable maternity adorableness: Asos. But more on that in a second.

As I scrolled through picture after picture of models with fake bumps posing in rather awkward and lackluster get-ups, a few pieces popped out at me. So, being the nice preggo lady I am (and hearing from so many of you ladies who are in the same boat or know someone who is), I decided to compile a collection of my faves.

Be impressed that I steadfastly refused to include any “regular items that could totally work just as well as the ones labeled ‘maternity.'” Every single piece of clothing below is classified as maternity and presumably has something about its makeup that gives it this distinction.

Oh, and there’s nothing over $50 (and almost everything is well below that). 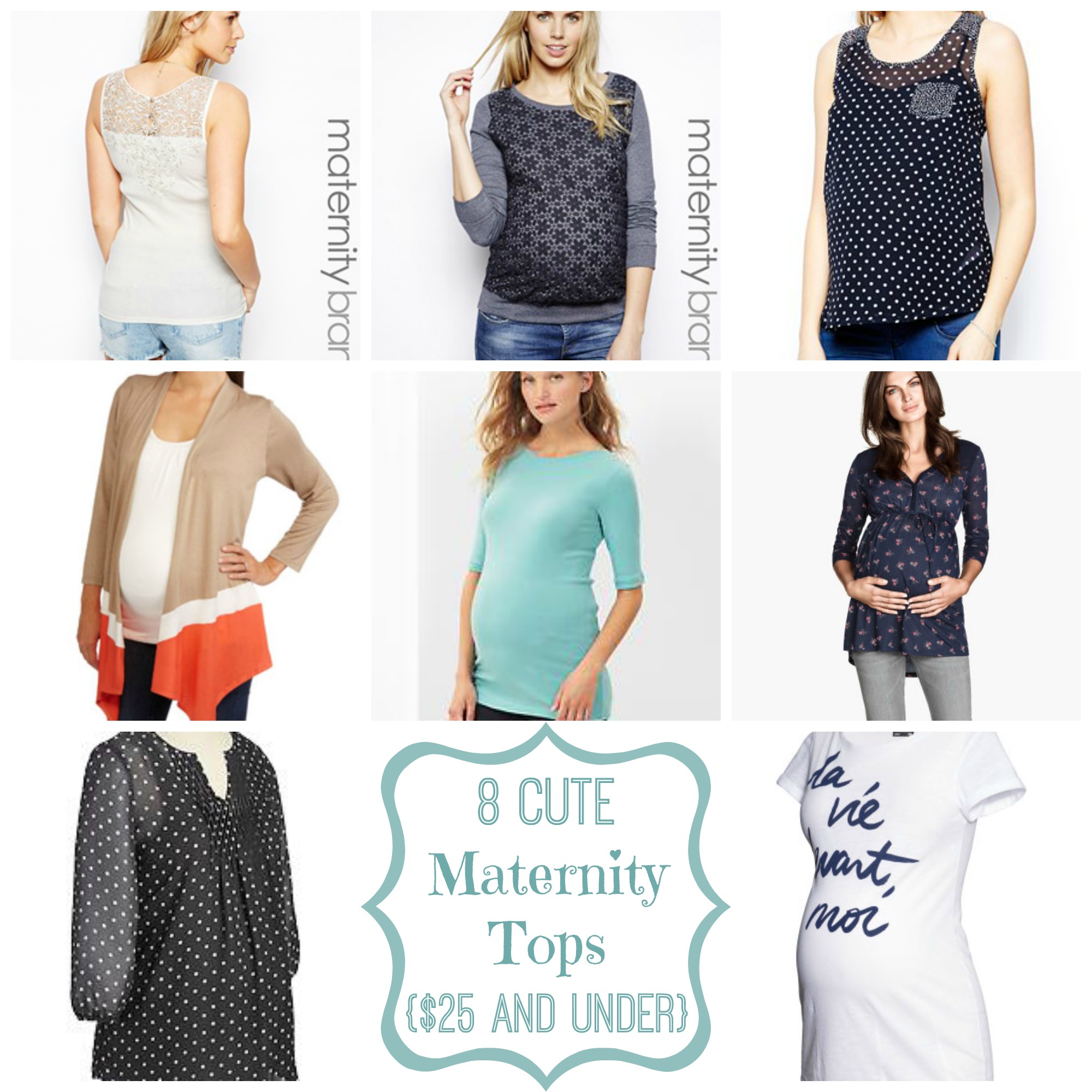 A couple of notes of interest about the tops: #1 is less than $9. I’m very tempted to order it. #4 is actually a 2-fer, with the cardigan and the top combined into one. It’s only $14. And #5, while seemingly uber-plain has a low ballet neckline in the back, which adds a special touch (plus, you know I love that color). It’s only $14 at GAP online.

Next up, let’s take a gander at some dresses, shall we? 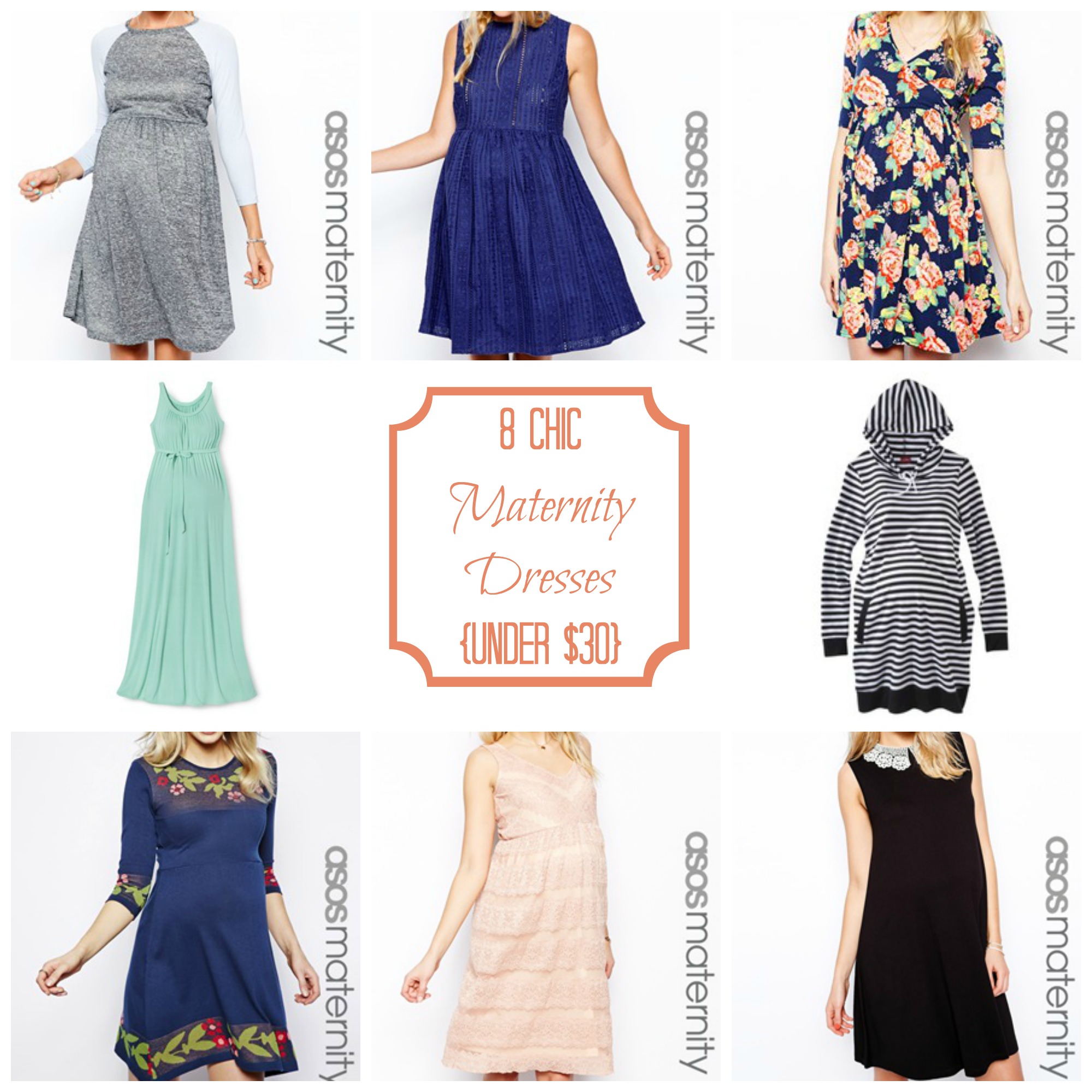 You might have noticed that Asos features rather prominently in this roundup. That’s because they were practically the only place I found that carried a large selection of maternity dresses with any kind of interesting details at all (stripes or color-blocking was about an adventurous as anybody else got). Also, while I hesitated to include some of these styles because they seemed a little on the short side, I looked at the actual measurements and tried them out on me and discovered that most should come at least to my knee, if not longer (in other words, their model’s a giraffe…and I say that with envy. I always wanted to be at least 5’10”).

Of note, I’m in love with the floral wrap dress (top right). I zoomed in, and the print is much prettier up close. It’s $23 (no tax, free shipping), and I’m oh-so-tempted to get it if I order the lace-back tank from above. Also, do yourself a favor and check out the textured lace on #’s 2 and 7 (top and bottom middle). Soooooo pretty. Oh, and even though it kind of looks this way in the pics, the upper portion of #6 (bottom left) is not sheer. It’s just a lighter shade of blue.

Also of note: I just realized that two of these are a smidge over $30. But I was too lazy to change my graphic.

And finally, we have maternity bottoms (the 5-year-old in me is giggling as I type that). 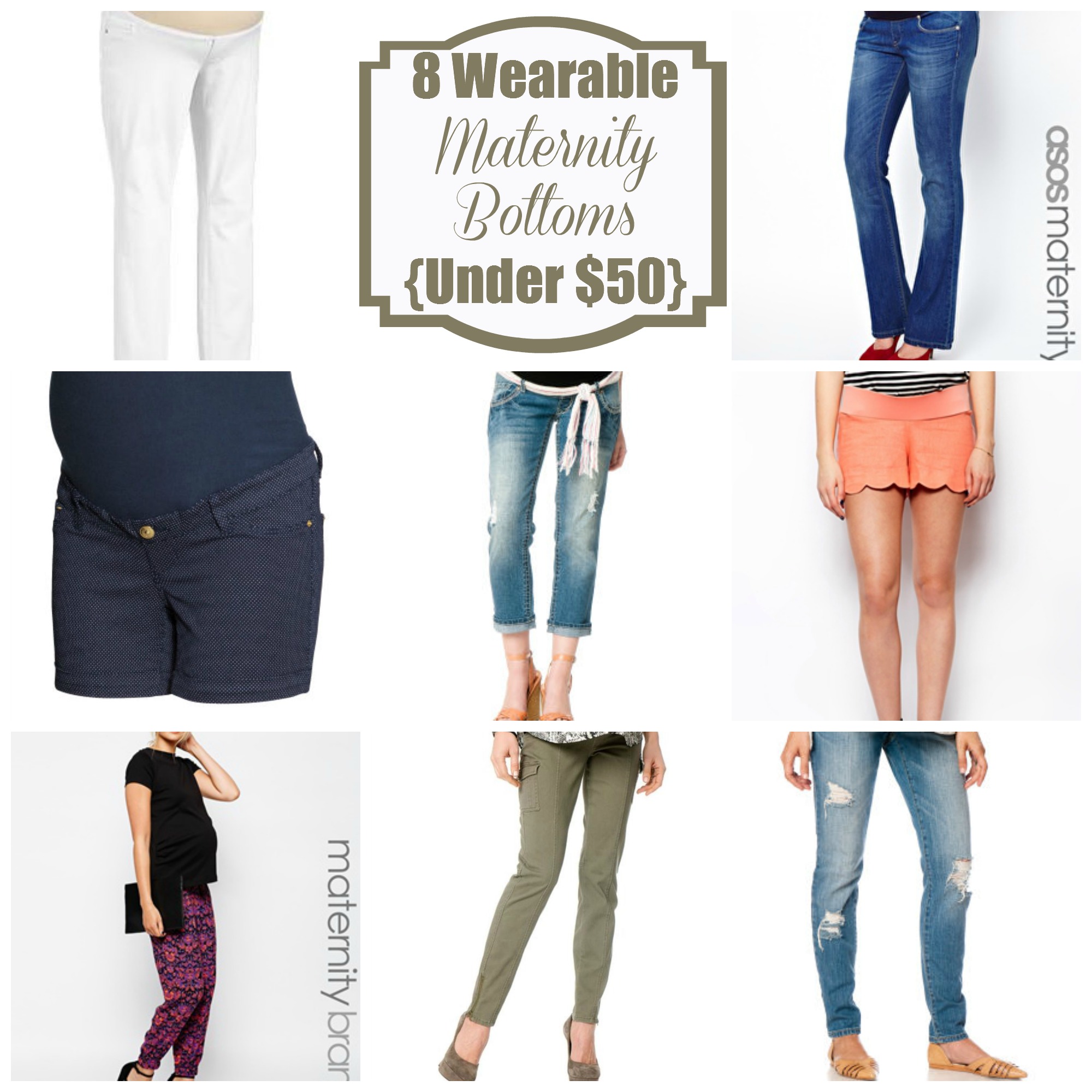 Both the cropped and long pair of destructed denim are from Motherhood, which is having a BOGO 50% off sale on denim right now, in case you want to take advantage of that. Also, that bootcut pair in the top right is only $30, has the under-belly adjustable waist (so, no annoying slidey full panel business), has at least some stretch, and–at least on the model in the pic–has the cutest preggo jeans butt style I’ve seen in a while (I always find it funny when I look at the rear view on a perfect, not-even-pregnant model and think, “PANCAAAAAAAKE!” That did not happen here, so this is another one I’m tempted by). Also, those coral scalloped shorts are featured on a 5’11” model and would probably still be too short on me, but a girl I follow on Instagram who is pregnant wears them all the time, and they are all kinds of adorable on her (she looks pretty petite, though). ALSO, it’s hard to tell, but the dark blue shorts have a subtle polka dot pattern which I love and are only $17. OH! And you do like how I snuck that crazy print pajama pant looking thing in there on the bottom left? I am SO drawn to that style right now for some reason, and my husband just shakes his head and purses his lips. I haven’t actually gone for it yet, but I’m not saying I won’t (hear that, babe?).

AAAAAAAND there you have it.

My picks for fun, comfy-looking, not-too-terribly expensive maternity-wear that might actually be worth splurging on. (And maybe even wearing after you’re done being pregnant, depending on the fit).

Had y’all already heard of Asos? I was so pleasantly surprised by their selection that I ordered this bow-front preggo one-piece (on sale for $30) before I really even realized what I was doing. I’ve looked and looked for the past 5 years or so for a maternity one-piece that I loved that wasn’t too low-cut and was a style/color I liked without being bank-breakingly expensive. But I’d never found one I loved until now (it ties in a bow in the back too). 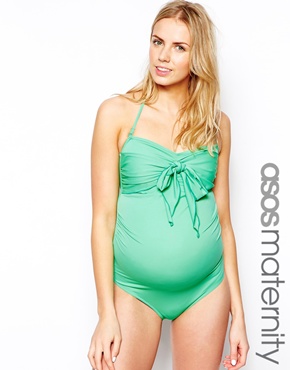 I don’t have a clue what their quality is like, but I will let you know how this works out for me (just don’t expect me to model it for you). The best part? Free return shipping if it doesn’t work out.

Any cute, non-blah maternity sources I missed? Obviously, Old Navy and GAP are great for staples, but if you’re looking for something with a little more zing, just keep moving.