So, I didn’t exactly intend to leave you hanging without a preggo update for the last 7 weeks (because I’m so sure that you’ve been dying to know exactly how many hormonal breakdowns I’ve had in the last two months), but since my last check-in was at 31 weeks, I guess that’s exactly what I’ve done.

So sorry. I will do my best to include as much minutiae as possible to make up for it, k? (Yippee). 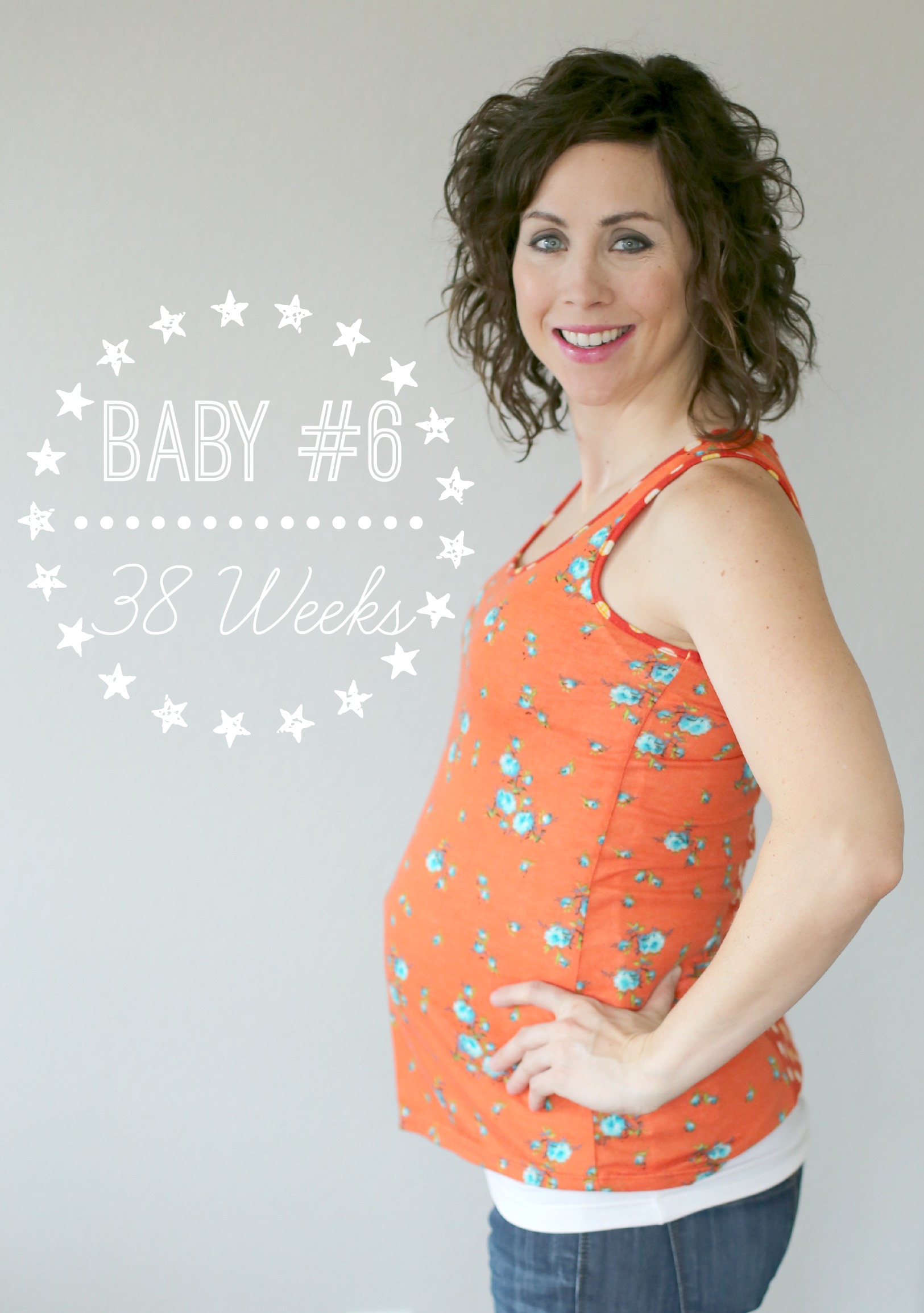 Welp. I must say that I’m not the least bit surprised to be giving you a 38-week-update because–as I’ve mentioned before–my babies tend to stay verrrry comfy in this belly o’ mine. (I just keep telling myself, “4 more weeks,” just in case, but I don’t honestly think we’ll make it that far…famous last words). Weirdly enough, after feeling ready-to-the-max about 6 weeks ago, I’m experiencing a level of chill I probably never have before at this late in the game. Part of that is because life is just so stinkin’ full, and it kind of feels like, “As much as I’d like to meet you right this very second, buddy–not to mention give my aching lower back a break–I’m kind of too busy to have a baby right now.”

NESTING: In keeping with what I just mentioned, I’ve been trying to get as much done as possible before he comes when I feel that frenzy of MUST-CLEAN-ALL-THE-THINGS coming on. Which…usually manifests itself in a 4-hour-long flurry of dragging things out to wash them or dust them or sort them or bag them. Oh, and lots of cooking. I’ve made double-batches of various staples for the last several weeks and have built up a respectable back-log of freezer meals for when he comes. In fact,  I’ve just about gotten everything to the point that I feel like, if he came tonight, I wouldn’t feel crazy. BUT, I know that it won’t stay all nice and tidy for long, so I’m trying not to worry about it too much.

ATTITUDE: A friend of three who isn’t having any more asked me the other day if I felt like my attitude towards this baby is different than my first–citing her own more relaxed standards by Baby #3 (and expressing a tinge of worry at what Baby # 4’s fate would have been had they had one)–and I just started laughing.

With Ezra, my first, everything was done. I mean, people throw you multiple showers. You’ve got baby gear threatening to swallow your house whole (please tell me I’m not the only one who has tripped over the bassinet, only to fall into the giant stroller box, on my way to the bathroom at 3 in the morning). The car seat and the crib and the rocker and the changing table and the diapers and the diaper Genie and the bottles, the bibs, the blankets…you get the idea.

But by the time Baby # _____ (I’m sure the number is different for everyone) rolls around, not only do you already have a pretty good stash of (spit-up and poop stained) everything, you also have a much better idea of what you actually need. So, basically, my response to my friend’s question was: “Welp. We have no small diapers, but that should be fixed by Saturday (some sweet friends are throwing me a diaper shower), and even if he comes before then, we can probably get some by the time I have him with how slow my labors are. I just washed a bunch of clothes and his bassinet cover, so he won’t have to be naked or bedless. And I’m pretty sure we’ve got a warm hat and a blanket somewhere around here (although they’re probably pink). Oh, and I have boobs. So, I think we’re good.”

Poor kid. Hope he’s not expecting too much. (Although, really, what newborn expects more than warmth, snuggles, clean pants, and food?).

EXERCISE: I’m still truckin’. In fact, last week, when everyone was out for Thanksgiving, I subbed 5 classes on top of my usual 3. Another instructor quipped, “That’ll teach ya not to go out of town for the holidays!” But, honestly, I had a lot of fun and felt great pretty much every time I taught. This week has been a slightly different story. This little guy’s head is definitely lower, and doing a roundhouse kick with that kind of pressure on your pelvis is…interesting. I plan on teaching ’til the bitter end, though, so I’m just grateful that everything’s still functioning on some level or another.

PREGNANCY SIDE EFFECTS: Don’t hate me for saying this, but I feel pretty awesome for being this pregnant. I mean, yes, my back and hips hurt constantly, and I could take a nap standing up pretty much always, but I’m not miserable. My varicose vein-y leg flairs up every now and then (wow, I feel 90 when I type that), but overall, I’m doing about as well as could be hoped for at the about-to-pop stage.

I attribute a lot of that to the whole exercising-til-the-bitter-end thing. As I was walking along with all five kids about to leave the gym one night, Nola dropped her blankie, and one of class participants marveled to her husband: “Did you just see that? This woman is 36-weeks-pregnant with her 6th child, and she just leaned down and swooped something up off the floor totally flat-footed. That’s just wrong.”

And I just laughed because I had no idea where she had been going with that and totally wasn’t expecting her to say that (and totally hadn’t even realized what I’d done). But the truth is that, because I bend and move so much when I exercise, my range of motion probably is better than could usually be expected with such a big belly.

I try to remind myself of little blessings like that when the twins spill milk all over the floor…again. At least I can still get down there to clean it up. The key word being try. Sometimes, it sounds a lot more like Yosemite Sam after Bugs Bunny tricks him into stepping off a cliff…again. Frickasammin’ is a fun word.

WEIGHT GAIN: I still haven’t stepped on a scale since 20 weeks, and I don’t plan to. I don’t think. I’m kind of curious but mostly blissful in my ignorance. But he’s definitely growing. At 33 weeks, I was only measuring 25 cm, and the baby was breach. But somewhere between that midwife appointment and the next (I’m pretty sure it was in the middle of a jump kick in BODYCOMBAT), he flipped (Praise Jesus!), and I had–ahem–jumped to 30 cm by my 35 week appointment. And then this past week, I had another big bump up to 34 cm. (If you’re not familiar with what these measurements mean, they represent the size of your uterus and usually correspond roughly 1 cm to 1 gestational week; I always measure a little behind, though).

CRAVINGS: None to speak of unless it’s just the random craving for carbonation or chocolate, but I have pretty much reached that point where it’s like, “I probably shouldn’t eat that, but I might anyway because I’ve only got a few weeks left, and it sounds good.” Which means that this little guy needs to get out before I gain 10 pounds in the last two weeks of my pregnancy.

Aaaaaaand there you have it. More maternal minutiae that you could possibly have ever wanted to read.

I know a few of you are due around the same time as I am. How are y’all doing? No, really. I want to know. Because pretty much every last person that has been pregnant in real life with me has had her baby already, and it’s starting to feel a bit insulting to still be pregnant.

Do you feel like your “standards” have dropped with each baby? At this point, if we have any more, he’s probably going to be wearing one of his older brother’s diapers and whatever mildly babyish thing we can find to shove him in.