I know not everyone loves a birth story. Some women eat them up like a plate full of freshly fried placenta (and everybody said, “Eeeeew, Aaaabbie!” But seriously, apparently this is becoming a major trend, y’all). Others find them a turn off (like the group of you who shuddered and slammed your laptops shut the second you read the word, “placenta”).

I’m somewhere in between–thriving on the drama and feeling of camaraderie and yet easily turned away by too much gore or unnecessary (but really, that’s pretty subjective) detail.

And so I find myself in a quandary–wondering how much to include, while still keeping the integrity of the story intact.

Still, at the risk of this getting really (and I mean, really) long, I feel like this story isn’t complete unless I rewind about 7 weeks to the moment when, at a mere 36 weeks pregnant, I suddenly started having regular, crampy contractions at my mom’s house one night for no apparent reason. Within ten minutes, my muscles started to spasm uncontrollably as my teeth chattered in my head (the result, I’m sure, of a surge of adrenaline at the prospect of delivering a preemie).

I lay down, gulped a few glasses of water, and practiced Lamaze breathing (hilariously enough, my mom chose that moment to introduce me to the tv series, Call the Midwife, so I could “take my mind off of the contractions.” It totally worked. Watching other people push babies out of their bodies was perversely calming).  And sure enough, the contractions eventually eased up, the muscle cramp in my lower back gradually released its death grip, and, within an hour, I felt as normal as an 8-month-pregnant girl can expect.

Honestly, it gave me a bit of a scare, but the most lasting effect was to trick my mind into something I had been refusing to even consider: that I might have an early baby, even though all of my common sense told me that this little guy would surely stay put as long as possible, just like 4 off my other 5 had done (Ezra, my first, was, quite surprisingly, 6 days early; I’m starting to suspect that it was because I was in much inferior physical shape to my current state; and, yes, that is an annoying thought).

Fast-forward to 38ish weeks pregnant and the Wednesday when my Braxton Hicks contractions just wouldn’t let up, for the love. I mentioned them to my midwife at my appointment that day, and she raised her eyebrows significantly and said, “Hmmm…maybe I’ll be seeing you later on tonight.”

I rolled my eyes and poo-pooed her suggestion with my usual, “Yeah right. He’ll show up 3 weeks from now.” (Just call me a prophet).

But then I went to teach Combat, and smack in the middle of a punching track, I had the sharp, twinging sensation that if I twisted too much, my water would break. His head felt that low. I continued contracting throughout the class, grateful for the fact that I tend to grimace while teaching Combat anyway, which meant that probably nobody thought too much of the, “Ow, that hurt,” faces I kept making in the middle of a roundhouse kick. In fact, I remember being distinctly relieved when a fellow instructor came in about halfway through the class because I thought, “Well, if my water breaks, at least Peggy can teach something for the rest of the class time.” (Side note: this specific instructor has been known to joke about her nightmare being that one of our pregnant instructors’ waters would break on stage. I’m so glad I wasn’t the one to bring it to life).

By the time I got home, the contractions hadn’t lessened a bit–were, in fact, increasing in intensity and duration. I even said to Shaun, “If these stick, I think we’re in business.”

In FACT, I drove to Walmart that night for various home birth necessities because I hadn’t bothered to order my birth kit yet. (For those who don’t know, a birth kit is a box of home-birthing items like sterilized cord clamps, blue pads, and such).

I’ve mentioned before that I’m really familiar with Braxton Hicks contractions and how deceptively painful/intense they can be. But these were different. When they just vanished after several hours of steady work, I knew they weren’t real, but I remember thinking/saying, “Any other time, those contractions would have meant that I was going into labor. Weird.”

I proceeded to say some version of those words for the next 3 weeks. Sometimes, I woke up all night long with intense, burning contractions, only to have them vanish the moment I put my feet on the ground in the morning. Sometimes, they showed up around 3 in the afternoon and lasted a good 6 hours. But they never decided to stick around and develop a strong, regular pattern.

At my 39 week appointment, my cervix was completely posterior (tilted toward my back), which meant that the contractions weren’t even doing a bit of good. I wasn’t dilated or effaced. No progress had been made. Huzzah for pointless pain!

As best I could, I ignored them, grateful that there was plenty to keep me busy (hello, Christmastime) and always slightly relieved after the fact when I got to tick one more fun thing off my “might-get-to-it-before-the-baby-comes” list (my baby shower, a Mama’s-day-out of childcare at my gym, Christmas day, etc.). My “due date” (the 20th) came and went, and I wasn’t too surprised.

But once all that was done, it started feeling a bit silly to still be contracting all the time…to still be pregnant.

If you’ve read the twins’ birth story, then you know that I had a somewhat similar experience that lasted a mere 4 days (but included multiple bouts of uncontrollable shakes and feeling crummy to make it extra-special).

And I must admit to feelings of déjà vu after I had Shaun take the kids to my mom’s on Saturday, December 27th, somewhat convinced that “this really is it,” only to have to shake my head and shrug when he got back an hour later because–yet again–“they just stopped.”

When nothing much changed on Sunday morning, we decided to pretend like I wasn’t pregnant, and even if I were, he wasn’t coming out anytime soon…which translated into finally finishing up Della’s big-girl room (just so we could rip it apart again a day later…more on that very, very soon) and a trip to “town” for a date day of errands (he ended running the errands while I got a pedicure with a friend; I wouldn’t complain if this became a habit) and Asian food (because, when you’re ticking foot massage and all other potential labor starters off the list, spicy Kung Pao Chicken sounds like a good idea). We even stopped by some friends’ house on the way home and spent the evening chatting, while I tried not to grimace too hard when a particularly nasty contraction hit. 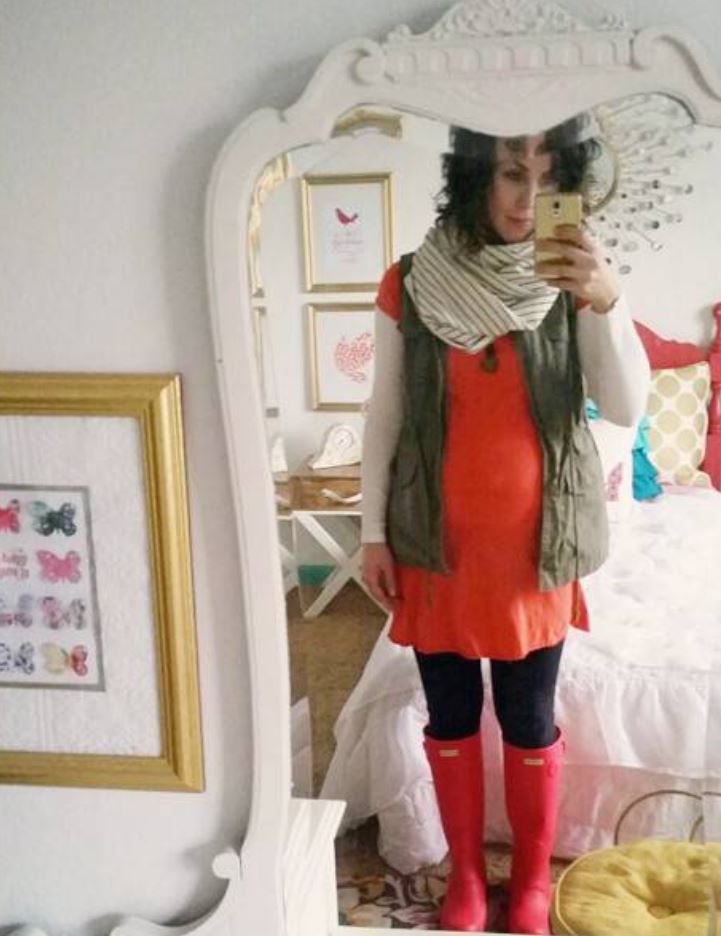 {Dressed in comfy layers, happy to have Della’s room finished, but wishing I were in serious pain}

The kids were still at my mom’s on Monday morning when…nothing was happening. I had a midwife appointment that afternoon, but I didn’t really expect good news.

Imagine my pleasant surprise when my midwife told me I was dilated to almost a 4 and 50% effaced. Progress! I’d forgotten what that beautiful word meant. My birth assistant was there for that appointment as well, and she gave me a list of exercises to do whenever I had a contraction to hopefully speed the process along and loosen up my stubbornly tight ligaments.

I was still having occasional contractions, so I headed to the mall (since it was cold and wet outside), stuffed some ear-buds in, and proceeded to march around the perimeter of the stores, listening to a book on Audible and ignoring the squeeeeeeeeze in my belly, even when it was hard to walk through it. I’m sure I looked ridiculous–a mountainously pregnant lady stomping around and around the mall with an expression of extreme focus on her face.

I stopped into a few stores here and there, but mostly, I marched. For two hours. And then I went to World Market. Because that totally makes sense when you’re trying to go into labor.

When I finally made it home, Shaun raised an eyebrow at me, and I just shrugged. The contractions were still coming, and they felt a bit stronger…maybe. But I knew they weren’t anywhere close to producing a baby. So, we watched an episode of Downton Abbey while folding three loads of laundry. And all the while, I guzzled Red Raspberry Leaf tea and faithfully performed my “labor exercises” every time a contraction hit.

After several hours of this, apparently I screwed up my face enough that Shaun got his phone out and started timing the contractions. 45 seconds long. T-W-E-L-V-E minutes apart. (After 3 weeks of this nonsense, people; if you didn’t believe that my body is stubborn before, I hope you do now).

Around 11:30, the contractions were more like 9 minutes apart and considerably stronger. But I still wasn’t too hopeful. I was pretty sure I couldn’t sleep through them, though, so we decided to stay up, Shaun fiddling on his phone in between timing them and me straddling an ottoman beside the bed while I alternated between burying my head in the mattress and breathing through a contraction and editing pictures of Della’s room. Within an hour and 1/2, the contractions were down to 5-6 minutes apart and more like a minute long. 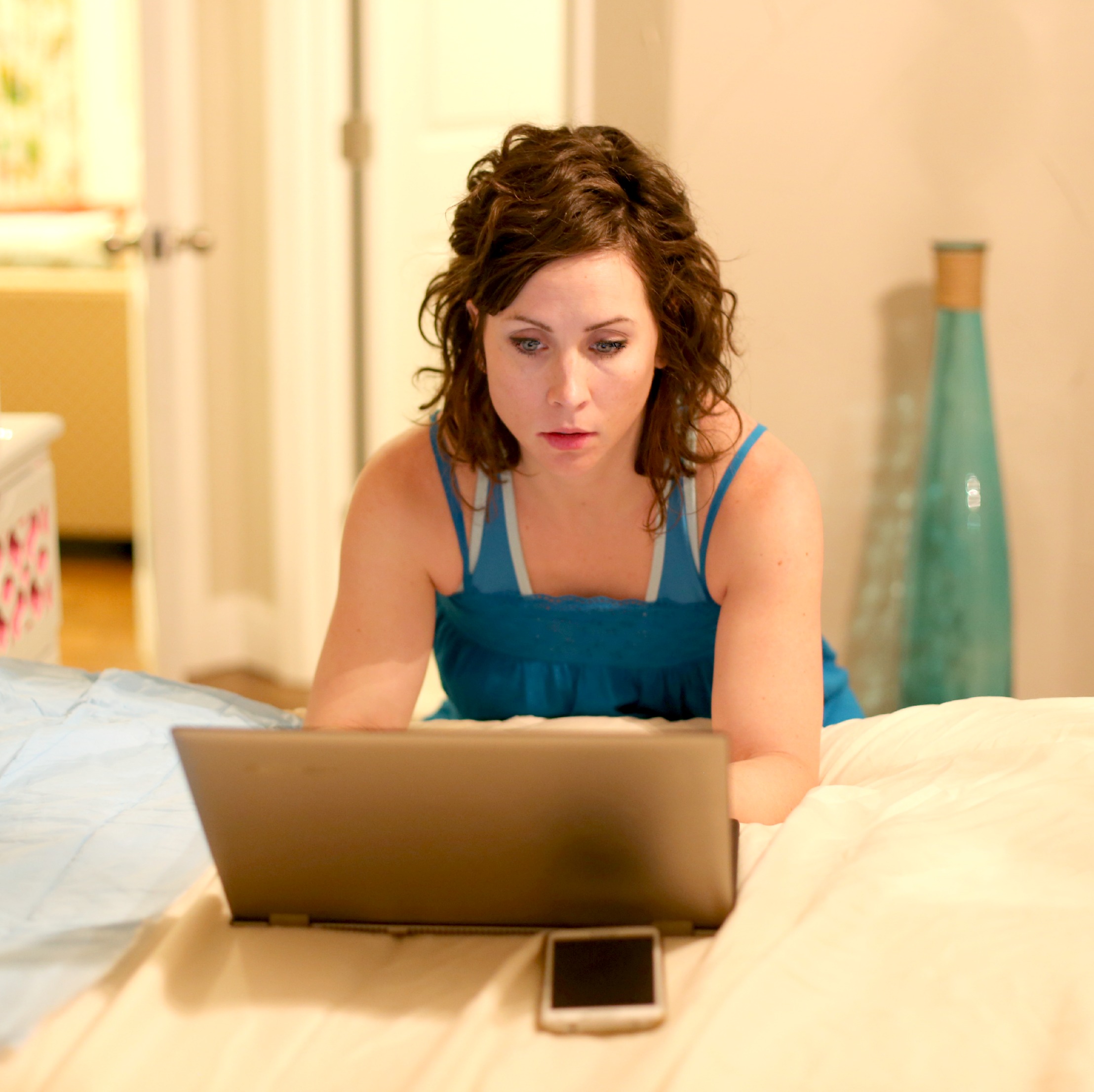 By 1 AM, I was finally convinced that I might possibly, actually, maybe, sort of be in labor.

Still, it was strange because, although the contractions were pretty intense, they were still 5 minutes apart. I literally had time to edit pictures and carry on a conversation between each one. Considering that the pattern was tending toward longer, stronger, and (a little) closer together, though, I decided to call my midwife–she lives an hour away–and at least get her headed in the right direction.

By the time she showed up at 3 AM, my muscles were starting to shake (thank you, lack of sleep + adrenaline). BUT! I was dilated to almost an 8! It couldn’t be too much longer now.

The thing is, despite the shaking and the contractions, I felt too normal to be that close to the end. I’ve heard-tell of such magical occurrences as virtually painless labor, but the magic has yet to visit me. In my experience, unless I feel like I’m going to die, my baby’s staying put.

Sure the contractions hurt. A lot. But they weren’t unbearable. Especially after I got in our tub. I looked up at my midwife and said, “What? Are these the same contractions?? They’re like a third of the pain!”

She just smiled and said, “They’re the same.” (Big thumbs up to water-labor!)

Sadly, I only got to enjoy that little miracle for about an hour. My contractions just weren’t progressing. So, sometime around 4:30 in the morning, I climbed out, dried off, and proceeded to spend the next 2 1/2 hours doing everything from lunging the stairs two at a time over and over to lying flat on the bed, falling asleep from sheer exhaustion between contractions to–well–everything in between. Anything to get the contractions revved up enough get this little boy out.

Finally, my midwife checked me again, and I was pretty well fully dilated.

So, I texted my prayer girls–who had been riding the weeks-long roller-coaster of “maybe tonight” with me–and said, “I’m dilated to a 9. I just need the urge to push!”

That was somewhere around 7 AM, a good 13 hours after I experienced the first contraction that I’d dared to let myself think might possibly by the start of something real.

Of course, I definitely didn’t expect what came next…

But you’ll have to wait for Part 2 to hear about that. 🙂