First up, thanks so much for all of your suggestions/advice on what I should wear to the wedding. Especially those of you who took the time to send me links. Y’all are nice! I’ll be sure to keep you updated.

A few months back, I attended an event featuring a panel of “powerful” Christian women. I use the quotation marks because, of course, nobody is truly powerful but God, but these women are definitely influential in the Christian spheres in which they move.

And while I was  impressed with their accomplishments and their talents, I left feeling a bit let down by their philosophies of work and motherhood.

Each woman on the panel is both a mom and an entrepreneur. Great! Me too! Definitely nothing wrong with that. I don’t choose to monetize this blog (did you know that? I don’t know if that will always be the case, but I make very, very little money as a blogger…by choice), but I do teach exercise classes and  have my art print business, Paint and Prose, with my friend/business partner, Lindsay, and I am really grateful to have outlets that also provide some income for my family.

As a Biblical point of reference, the Proverbs 31 woman buys fields, “makes linen garments and sells them,” (she’d be a hit on Etsy!) and “perceives that her merchandise is profitable.” She “does not eat the bread of idleness.” In other words, she’s  the ultimate worker bee. Much more so than I am (SO not a fan of getting up “while it is still night;” yikes!).

But the emphasis in that passage is not on the name she made for herself. Or on the amount of money she raked in. Or on how many books she wrote about her impeccable housekeeping skills. Or on how many people followed her on Instagram (I have to think that, had she had access to social media, she probably wouldn’t have spent much time on it).

Now, obviously, this woman is a prototype–an example to strive for. AND she had servants (aka: her versions of washing machines and microwaves). But, even though I know I’ll never be as perfectly efficient and compassionate and loving and balanced as she’s described to be, I can still learn so much from her diligence and priorities.

In contrast, while I left in awe of these modern day women’s accomplishments, I felt unsettled by their priorities.

To a group of (mostly) young women with little kids and big dreams, one of their most notable pieces of advice was not to despise your children’s younger years because: “pretty soon, they’ll be at school, and you’ll have time to do what you really love…unless you home school. In which case, you chose that.”

I think my mouth fell open a little bit at that phrase. NOT because I was offended. I know full well that home schooling is not for everyone and that, by choosing it, I willfully forfeit a certain amount of freedom. I happily own that choice.

No, I was struck by the implication that a child’s impressionable, formative, baby years are something of a holding pattern until his/her mama can be released to fulfill her “true calling” of __________ (maker, writer, teacher, business owner…whatever).

I couldn’t help but feel that, amidst plenty of other good advice, they’d gotten that part backwards.

Not that I was too surprised, since the emphasis on “following your dreams” and the importance of “me time” and self-care before care of others is one that reigns supreme  on pretty much any form of media that I encounter lately.

Don’t get me wrong. I get why the baby years feel a little–forgive me–pointless. After all, they won’t even remember most of what we do.

And the neediness! Oy! They can’t even wipe their own poopy bottoms or runny noses, for the love. Anything “productive” we accomplish is punctuated by numerous, oftentimes odorous, interruptions and will probably be accompanied by tiny, sticky hands wrapped fast around our legs.

And yet. Studies show that, by age 5, a child’s personality, character, and feelings of security and worth have already been cemented to a very large extent. So, apparently, they were paying attention to our care of them–for better or for worse–even if they can’t remember the particulars of it.

And I know, deep in my bones, that no words I write, no art I create, no money I earn, no societal contributions I make, no amount of #girlboss cred that I achieve could ever trump the significance of the impact that I have as the primary influencer of the little humans that have been entrusted to me. Up to age 5 and beyond.

Which is why I bought this cuff in Canada at a cute little shop in Squamish. 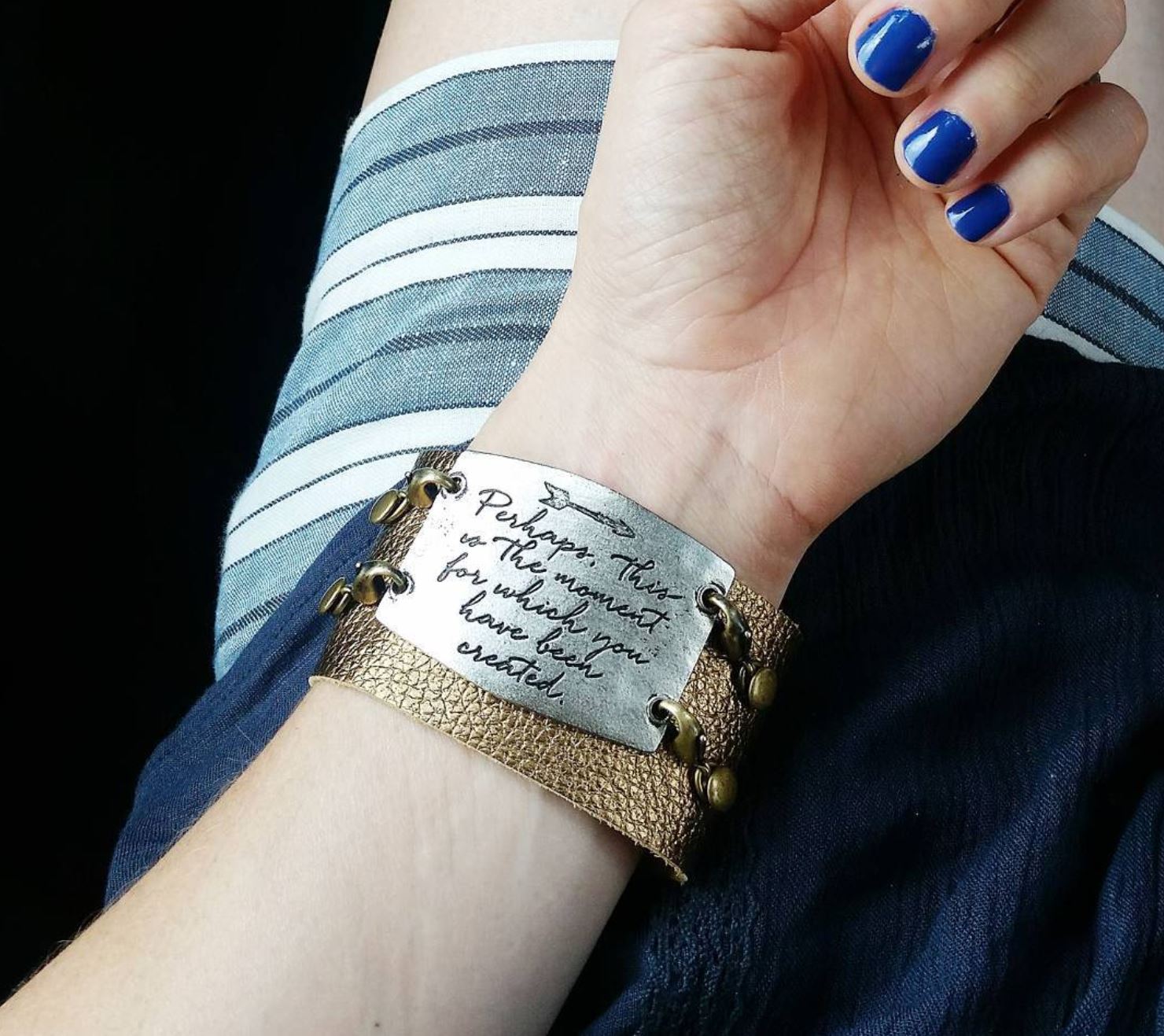 It’s a paraphrase of Esther 4:14, which says: “And who knows whether you have not come to the kingdom for such a time as this?”

In Esther’s case, these words came from her cousin, Mordecai, who was encouraging her to entreat the king to spare her people from eminent destruction.

But I can’t help but think that a series of smaller, less portentous choices were what brought Esther to that momentous brink. The choice to go to the palace to audition for the role of queen. The choice to humble herself under the care of the chief eunuch and let him direct her entire beauty regimen. The choice to not be a diva. The choice to continue to listen to her cousin’s godly advice, even though she was now queen.

I read that phrase, and it wasn’t images of the book I hope to someday write (nope, still haven’t found the time) that popped into my head.

Instead, I pictured one of the twins having a meltdown in her car seat–something that has been an almost daily reality for over a year–and I thought, “I need this cuff.”

What if, instead of despising the mundanity of motherhood or merely gritting my teeth until I can do something that “actually matters,” I viewed each seemingly insignificant moment of child-training as the “moment for which I was created.” The moment that is shaping me into the kind of woman that I hope to someday be. The moment that is allowing me to be a little bit more like Jesus.

(I’m not very good at this, y’all. Why else do you think I need to wear it on my wrist?) 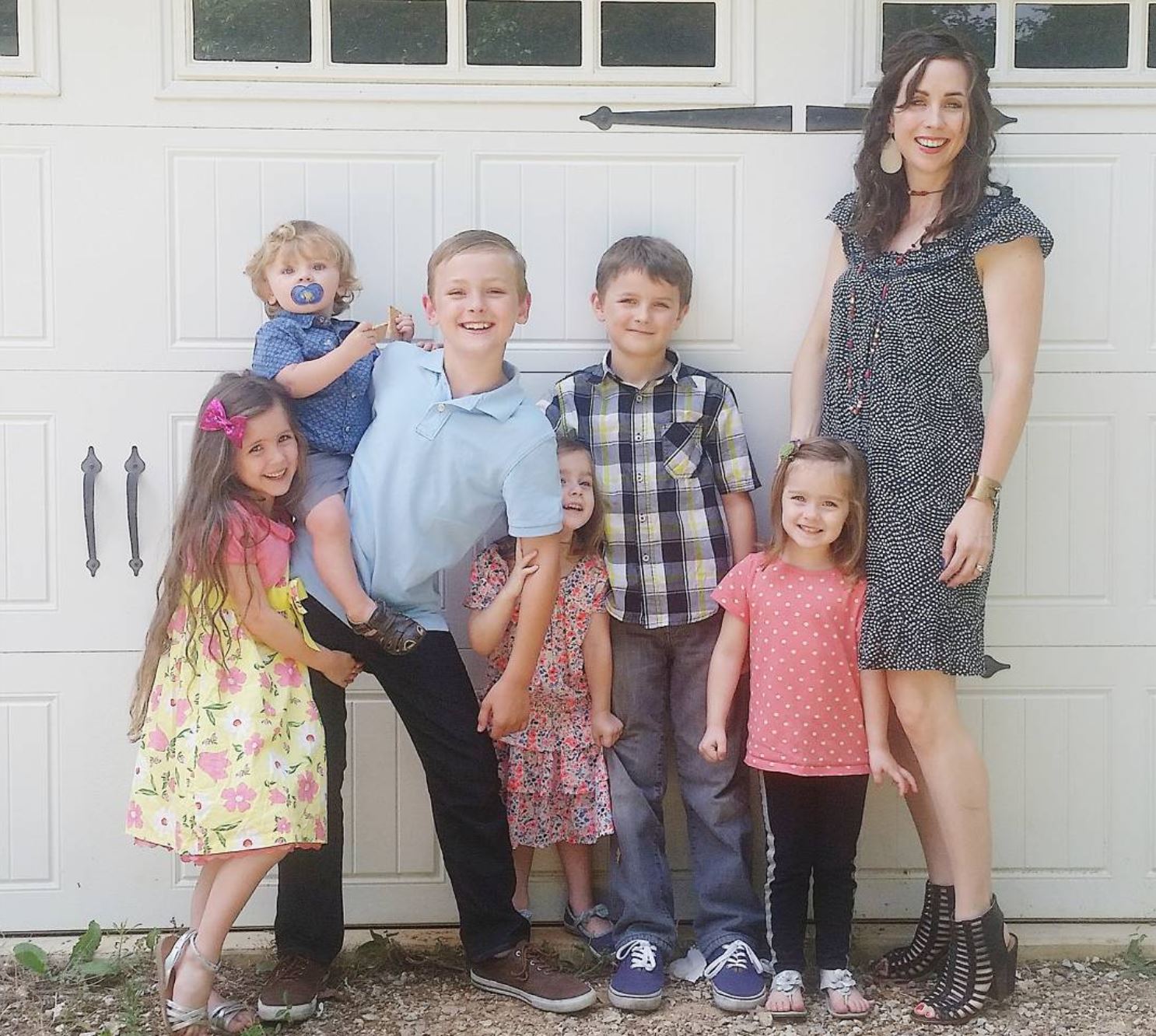 Which, after all, is the ultimate point, right? Well, that and teaching my children to do likewise. Anything else that I create or contribute pales in comparison to the legacy of faith that I leave behind with my family and–as we serve them and share the gospel–our greater community.

It’s not a very glamorous calling. At least not on the surface. There is nothing glamorous about “the first shall be last” or “take up your cross daily and follow me.”

And that is infinitely better.

P.S. Two caveats: 1) I have framed this post as a response to the things that mothers often can’t wait to escape FROM, but the truth is that, glamorous or not, I love spending time with my children. I may not always cherish or enjoy every single snot and tantrum-filled moment, but the fact remains that they (along with my husband) are my favorite humans on the planet, and I wouldn’t trade them for anything–not only because I know that they are my calling, but because they’re just rad, and I like them a whole lot. And 2) I know that not everyone who reads my blog is a mother, and I don’t want you to feel that this post is marginalizing your giftings and callings in the Lord. If you are not a mom, I would encourage you to consider even the most “insignificant” aspects of your calling to be “the moment for which you were created,” even if no one else ever recognizes the worth of it.