I don’t usually do reposts of past blogs, but the comments on this one (almost exactly) 2 years ago were just so fun to read that I thought I’d be depriving anyone new-ish around here of a treat if I didn’t reshare. Also, I know several of you have had babies since then, so I’d love it if you’d update in the comments about whether you stayed with your “name theme” with your newest kiddo(s). ALSO also, if you’ve already read it, feel free to skip to the end where I give you an (extremely ambiguous and unhelpful) hint about Baby #7’s name. 🙂

Oh! And I would be doing you a disservice if I didn’t mention that I have a rockin’ giveaway going on over on my Instagram account. 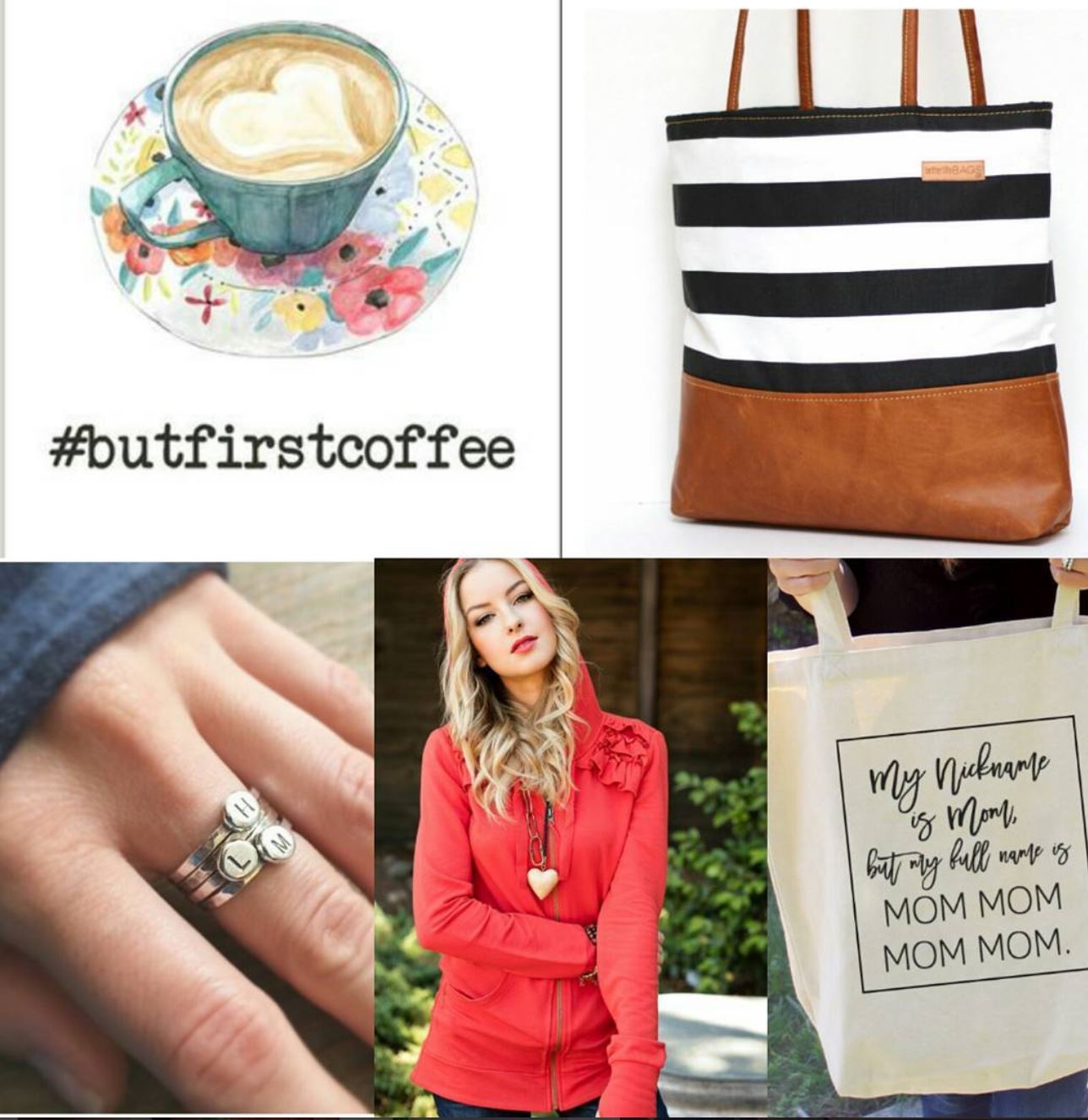 I had a reader ask me about my process for choosing baby names last week, and it got me thinking about a) whether I even have a process, and b) what in blue blazes it is if I do?

For lack of a better term, I’m calling it “name parallelism.”

There’s this thing in grammar called verb parallelism in which you are supposed to keep the form of your verb consistent throughout a sentence. For example, if you’re going with the gerund (a verb ending in “ing” that’s been made into a noun), then you would say, “I like fishing, eating ice cream, and playing in the rain.”

If you were going with the infinitive (the word “to” + an action), you would say: “I like to fish, to eat ice cream, and to play in the rain.”

However, you’re not supposed to say: “I like fishing, eating ice cream, and to play in the rain.”

So, why the grammar lesson? Because a) I’m a grammar freak (and, yes, I realize that there are typos and grammar mistakes on this here little ol’ blog in practically every post; I may be a freak, but I don’t catch every mistake…and, sometimes when I do catch one after I’ve already hit publish, I’m too lazy to fix it :)), and b) the little twitch I get when I read a non-parallel sentence is the same one I get when I think about my children’s names not being parallel.  Or not “matching,” to put it in less geekish terms.

In the words of the immortal Inigo Montoya: “Lemme ‘splain.”

Honestly, I think most people have this in them to some extent since most families with multiple children that I encounter have a pretty high degree of name parallelism.

Keep in mind that this particular quirk is not the same thing as the First Letter Quirk. (See the Duggars and their thing with “J’s”).

But, if you were to look at all of my children’s names, you would see that they have two things in common: 1) they are old-fashioned, somewhat unusual names and 2) they are all only two syllables long (when it comes down to what we actually call them). Ez-ra, Si-mon, Del-la, Ev-y, No-la. Theo. I tend to think that the length thing is purely coincidental, but maybe it’s actually another subconscious name quirk that I have. I guess I need to try to name a kid something longer than two syllables and then actually call him that and see if it makes me itch.

ANYhoo, just for fun, I put together a little graphic of different kinds of name that I consider “parallel.” Feel free to disagree or chime in with more! 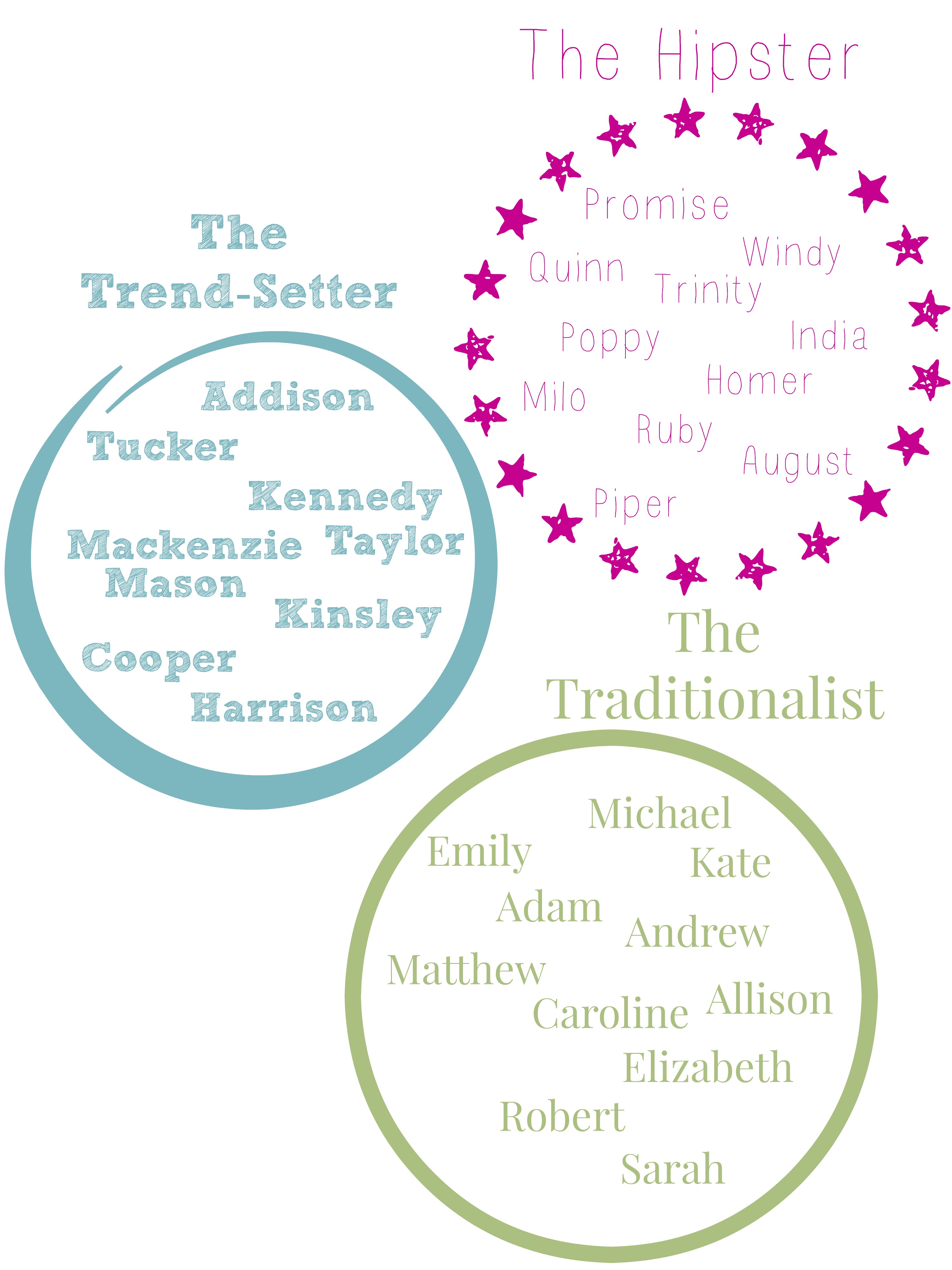 It’s interesting to me how, with both the trend-setters (AKA: “I really like last names!”) and the hipsters, there’s a lot of gender ambiguity within the names themselves. Is Taylor a girl or boy? What about Quinn? (I have friends who both have kids named Quinn almost exactly the same age, and one’s a boy, and the other’s a girl). Whereas, with the traditional names, there’s no doubt. Whoever heard of a boy named Caroline??

Of course, as much as I like many of the names above, I fall into a completely different category (the ones above are by no means exhaustive, of course), which I will tentatively call: 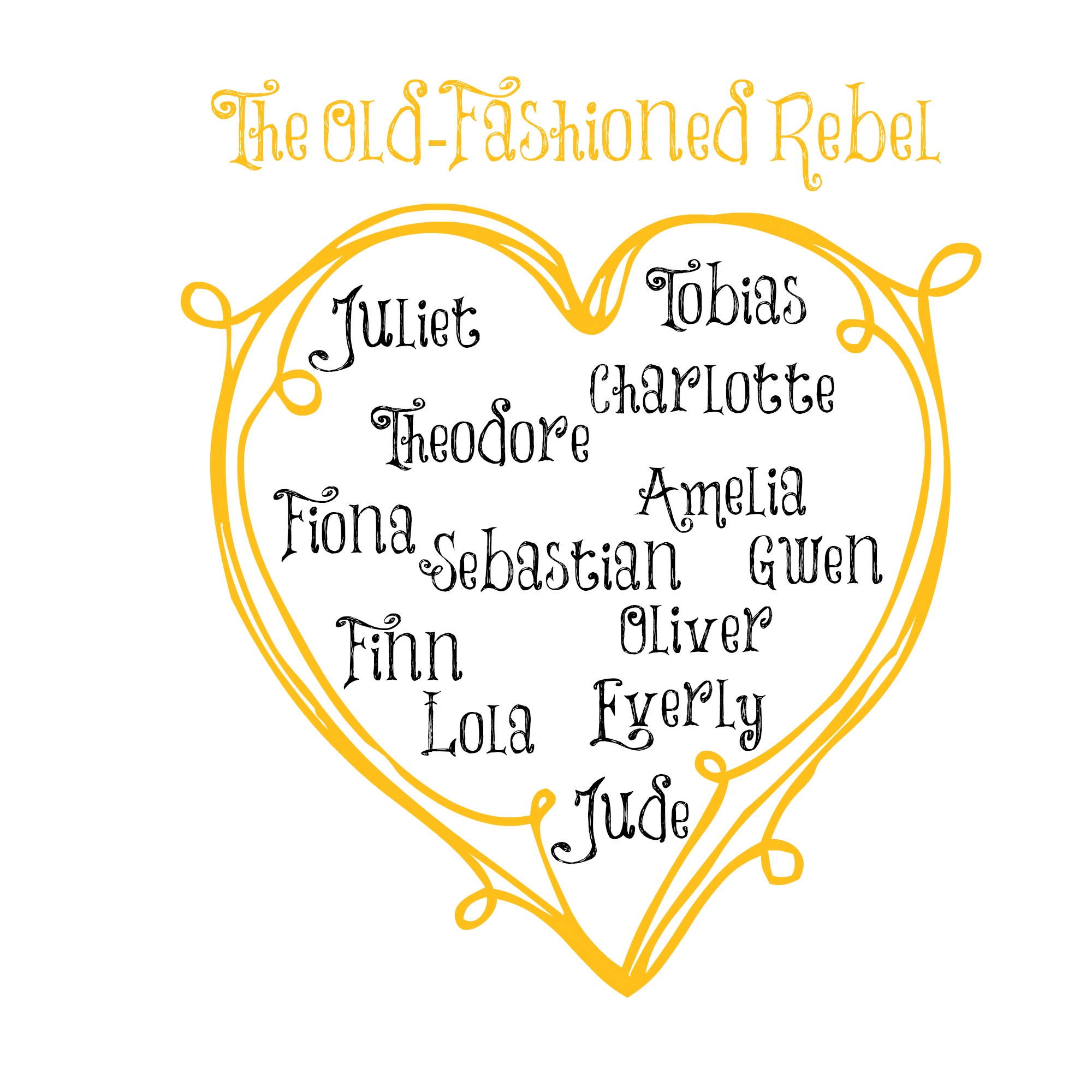 Again, these are not ALL the names I like, but they are my favorite kinds of names and–in my strange little mind, at least–they have the same vibe. They’re not your everyday-average-go-to’s, but neither do they inspire visions of dreadlocks and nose rings (nothing inherently wrong with either; they’re just not “me”).

So, what about it, folks? Do you have a name-picking philosophy? Am I the only one who’s weird about names needing to “match?” The funny thing is that it doesn’t usually bother me when I encounter a lack of name parallelism in other families; just mine.

Do you fall into a particular category? Or is it just a “whatever I like” kind of thing? Honestly, I go with what I like. And my husband tends to think like I do (although he has both vetoed a few of my more outlandish preferences and promoted some that I didn’t expect. See: Magnolia). But what I like tends to be pretty consistent.

P.S. Unlike last time, Baby #7’s name is nowhere to be found in the above list. We’re going a little rogue with this one. Not too crazy. But we figured it was time for something a bit different. It still “matches” (again, in my quirky little mind), but it’s not nearly as “normal” as the rest. Feel free to guess away to your heart’s content!