If we were just sitting down for a chat (how fun would that be??), I would have lots and lots to share with you. Life is careening along at a breakneck pace, and things that I think just happened (like last night) turn out to have taken place 5 days before. No wonder Honor seems like he was just this teensy little thing and now is stretching the toes of all of his 6 months outfits, holding his head up, swiveling it around when he hears a voice he likes, and even starting to giggle a little at his siblings’ shenanigans.

He’s just as wonderful as ever and maybe my most content baby yet to just be. This is the first time the boys have been old enough to “watch” him at the gym, which has actually simplified things considerably, since he’s not allowed in the nursery until 12 weeks, and I started teaching at 3 weeks postpartum (totally not what I would have preferred, but I ran out of subs rather quickly this time). In the past, I would have had to feed him mere seconds before rushing out the door, leaving him home with Shaun who hopefully wouldn’t get an important conference call in the middle of a crying fit (Honor’s, not Shaun’s…although Honor has almost as few of those as Shaun does, so it probably would have been fine ;)). And then, I would have had to hightail it home as quickly as possible (since it’s a 30 minute commute both ways) to feed him again. 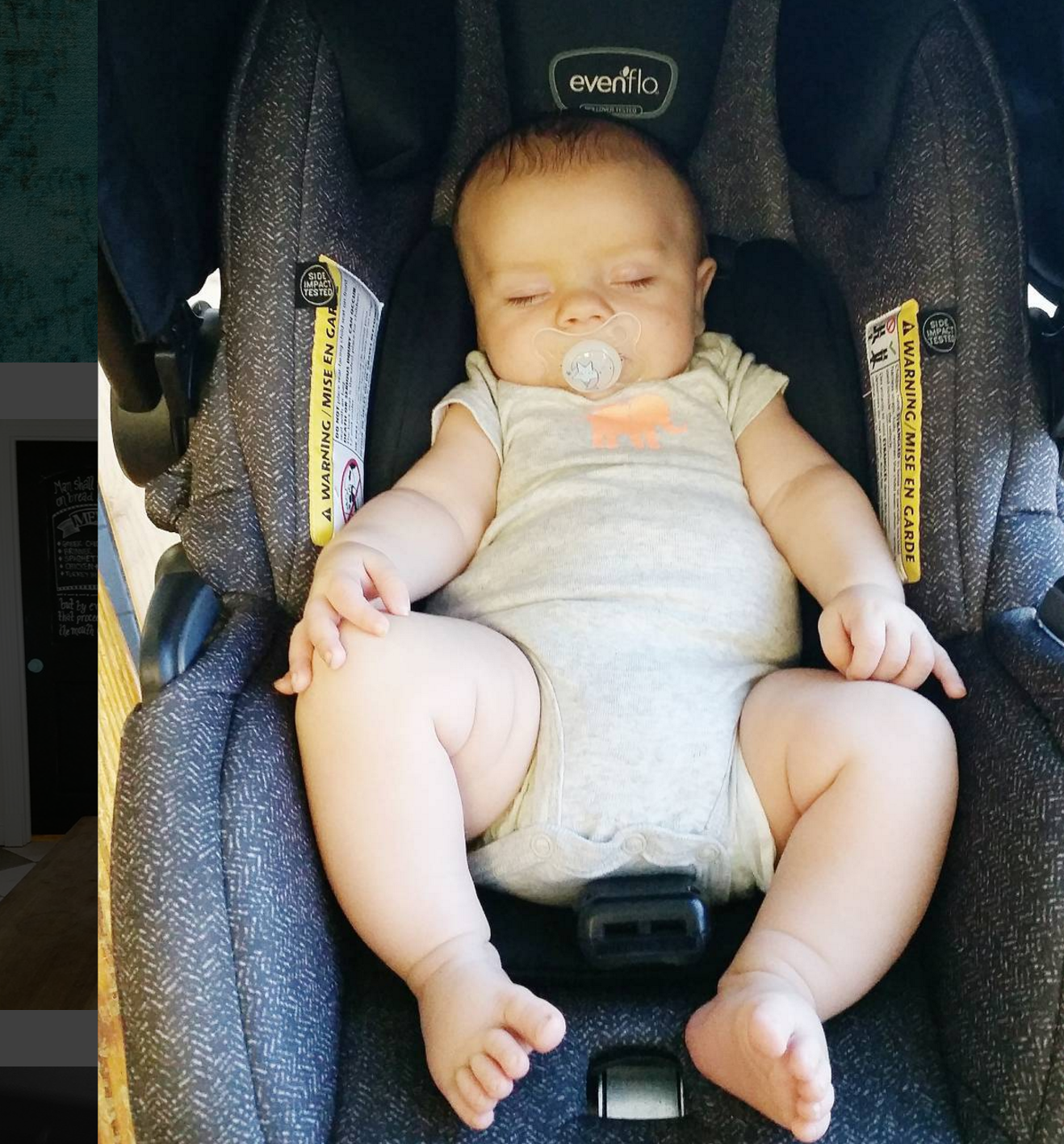 But now, Ezra and Simon–who have turned it cute little bookworms–will happily sit for an hour and read at the table right outside the childcare room door with Honor hanging out beside them snoozing or looking around with bright, round  blue eyes (shaded by thee longest, straightest eyelashes…after having a passel of curly eye lashed kids, it’s funny to see him peeking out from underneath his stick straight fringe). Maybe you’ve heard of blanket-trained kids? Well, Honor is car seat trained. And it’s pretty rad. And then, if we need to do an errand, or–like on Tuesdays–I’m teaching two classes, well, he’s right there with me to feed. SO much simpler!

Speaking of babies, we have six new fur babies at our house. 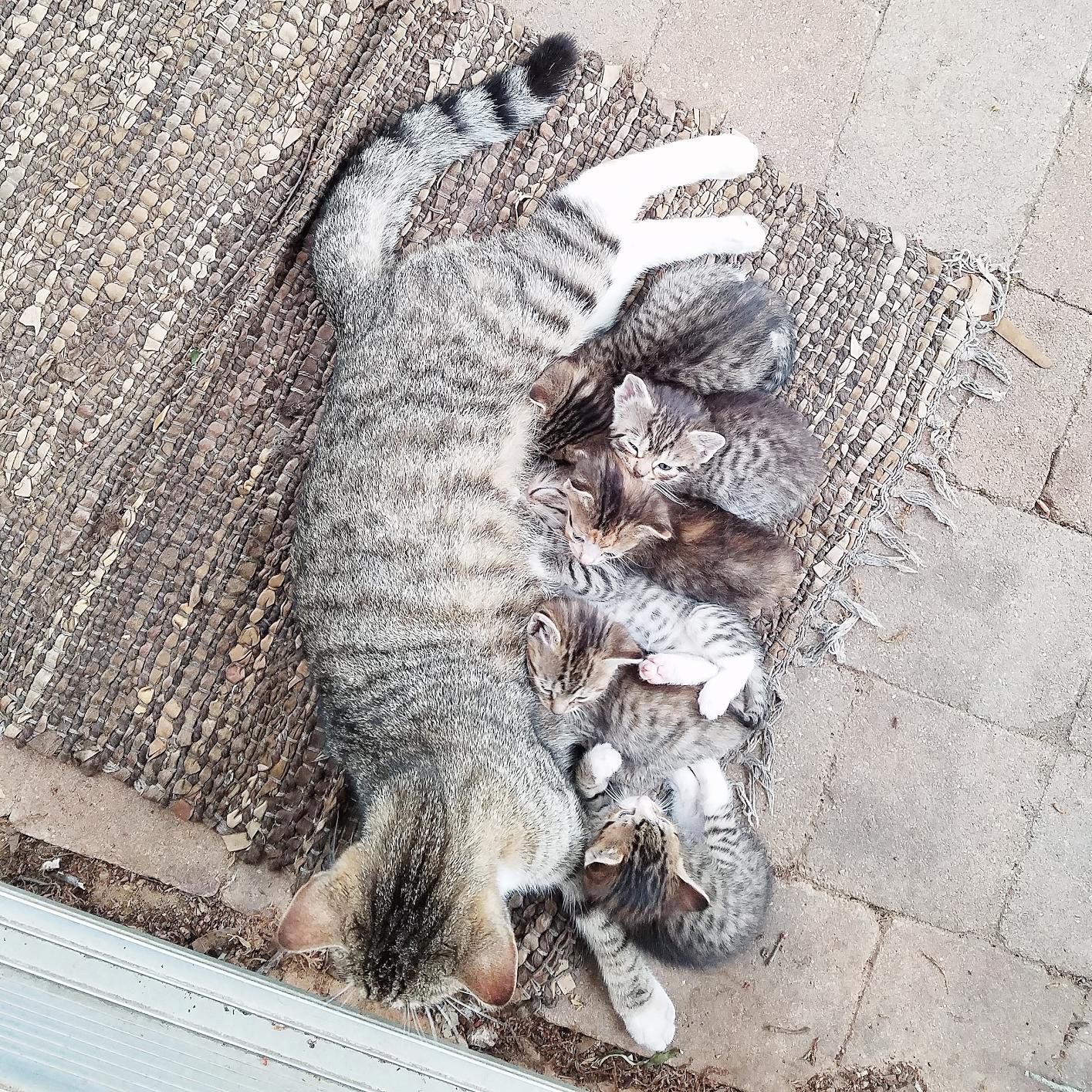 Having nursed twins while 3 other small children used my body as a jungle gym, I feel a great kinship with that mama cat right now.

They are just getting to the super-cute, playful, fluffy stage, and the kids have convinced themselves that we’re keeping ALL of them (my eyes just crossed a little). You know…one for each of the big ones (because Honor is only old enough to pull their tails by accident).

Funny story: we have a cat house that Shaun made with the boys a while back that matches the exterior colors and trim of our actual house. And Faith (the mama cat) had the good sense to have her kittens IN that house. But the very day that Shaun hauled a trailer of miscellaneous junk to the dump (a few weeks after they were born), she had the very bad sense to move them.

Shaun came back from his trip to the dump carrying a mewing bundle in his t-shirt and informed me that, just as he was about to throw out the last bit of trash, he heard high-pitched meows and noticed that a dark, furry pile in the corner of the trailer appeared to be moving!

Nothing like throwing all of your kids’ kittens in the trash to lose you your Dad of the Year Award double-quick. (And nothing like hauling a bunch of frantic clawing fur balls home in your shirtto elevate you to Super Dad status even quicker…and a well-deserved status it is).

Speaking of kittens (sort of), we’ve already shown the house to one family of 6, the dad of which asked if the kittens came with the house. (The mom was less enthused). And it’s a good thing our older kids weren’t there because both Shaun and I very enthusiastically agreed to throw a pile of kittens in as a closing incentive.

Either way, this family is coming out again today, this time to see the property in daylight (they had to come in the evening the first time), and they are not only interested in the house/property but in possibly buying it furnished! (I can’t even begin to properly express how happy the thought of not having to move furniture and/or sell it off piece-meal makes me).

If you think to pray for the outcome of that situation, I would be grateful. We want the Lord’s will first (and only), but I’m not going to lie that I have definitely been pestering the Lord about whether this might possibly be it. This morning, during family Bible reading, we read Luke 11:9, which says: “Ask, and it will be given you, seek and you shall find, knock and the door will be opened to you.” I KNOW that verse is used out of context all the time, but it is addressing the idea of approaching the Lord boldly with our requests, and so that’s what we’re doing. Ultimately, only he knows our future (of course), and I feel perfect peace about all of it, so it’s all good!

In other (bizarre) news, our UPS driver has taken to dropping our packages off next to a particular tree beside the driveway (only about 1/5 of the way down it) rather than bringing them to our front porch.

At first, I thought it was a fluke (had to be, right?), but after our last three packages all materialized in the exact same spot, I’m thinking not. The slightly impish part of me wants to call his boss and suggest that he only pay him 1/5 of his pay and see how he likes that! Ha. Either way, he has me trained to check the bushes for packages these days. 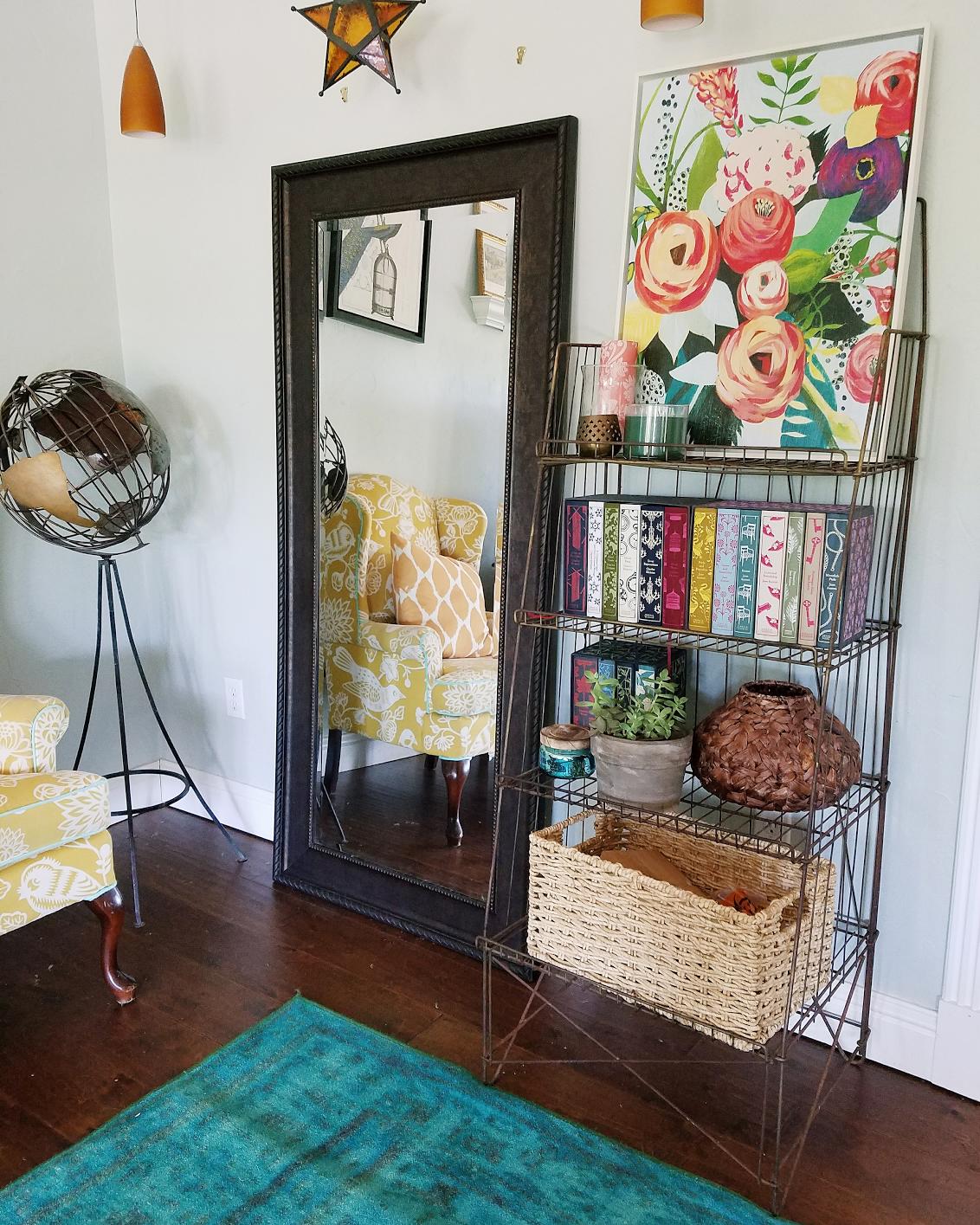 Those pretty books that I scored on Amazon Warehouse Deals were just languishing beside our driveway for several days before I realized it. Good thing they were wrapped in plastic!

Hmmm…what else? I think I’ve mentioned several times before that my mom (who is my super hero) takes my three oldest kids home with her to sleep over every. single. Thursday night? Shaun and I like to make that our “date night” of the week (which usually means Thai takeout that we eat while watching Fixer Upper on the couch #partyanimals). Last week, instead of the usual, we went down the hill to our neighbor’s house for the very definition of a “roaring fire.” Our neighbors have a peach orchard (he’s a farmer, among other things, by trade), and they have an actual peach pruning bonfire. We roasted hotdogs and s’mores (though not on the big fire…our sticks would have had to be 30 feet long) and then awed all of the little kids with the blaze. 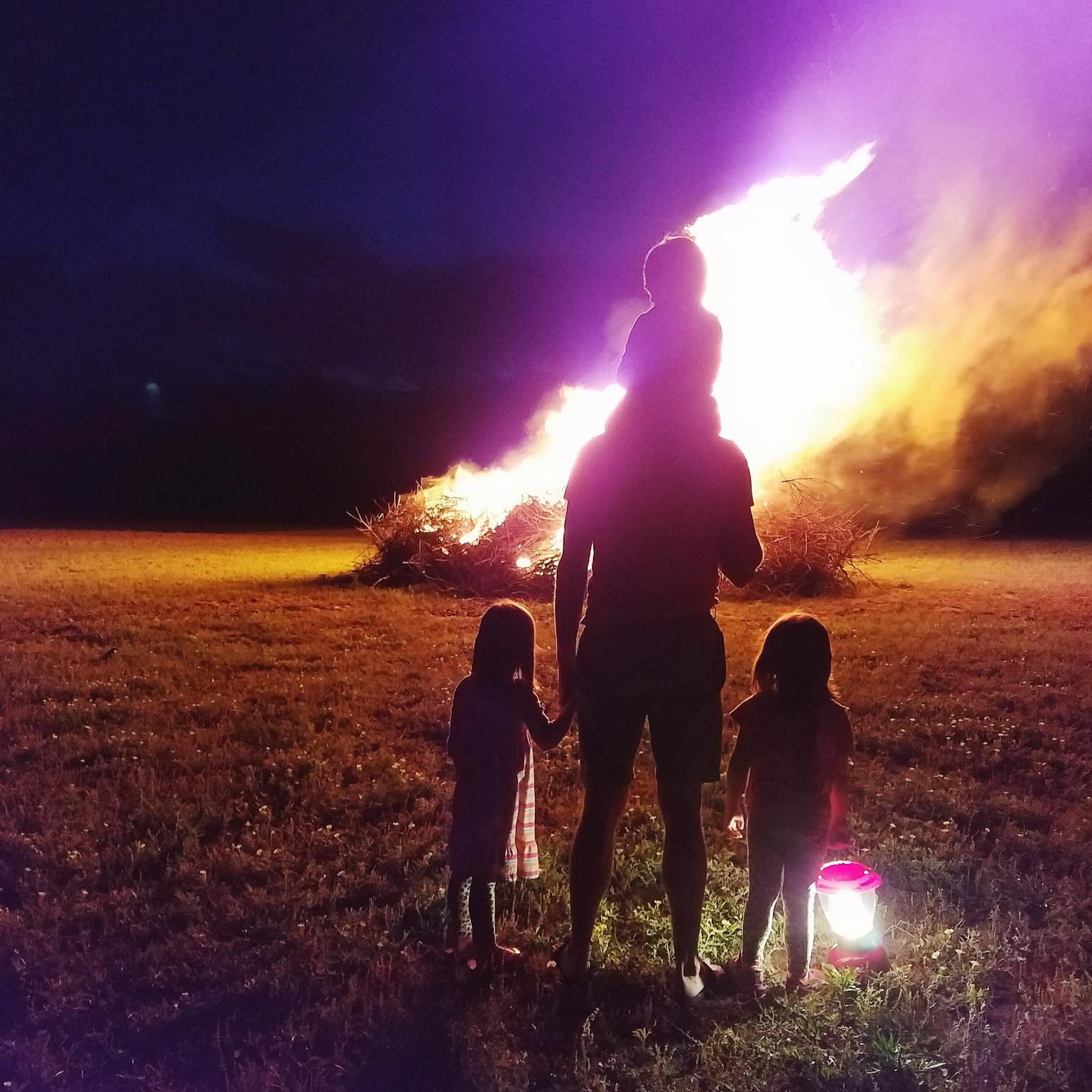 In still other news, we only have 2 meetings left of our home school co-op this year, and I’m a bit flabbergasted that the school year is almost over. The way this particular co-op works is to focus less on “tuition” (which is nominal) and to focus more on parent participation (your kids can’t attend unless you’re there fulfilling some role or another). To that end, I’ve spent my Mondays for the last 7 months grading grammar workbooks and essays. I actually kind of enjoy it as it gives me 5 kid-free hours a week during which I can exercise that word/sentence loving part of my brain, and my kids can socialize and learn from someone else. But next year, they’ve tapped me to teach high school Spanish, which is taking me back to my teaching roots (since I taught Spanish 2-4 in 2 different public schools and 1 private one before I eventually quit after I had Ezra and Simon).

I’m thinking I may have Ezra take Spanish 1 with me, even though he’ll only be in 6th grade, because he’s very bright, has an incredible memory, and needs to be challenged. I can honestly say that I never really expected to be able to teach my own child in a classroom setting, and I’m actually really looking forward to it.

Oh! And in case you’re wondering, it’s not nearly as hard as I thought it would be to keep a house show-ready, even with 7 kids in it. Yes, it’s taking up way more of my day than it did before, and other things (usually dinner prep) are getting put on the back burner (sometimes, literally). But it’s happening, and I am really enjoying not tripping over toys as much. (Although, to be honest, one of the main reasons that it’s so much easier is that we have gotten rid of almost all of our toys or anything else extra, for that matter). Now, if we can only convince ourselves to “live like we have a house showing in an hour” in the new house, we’ve got it made! 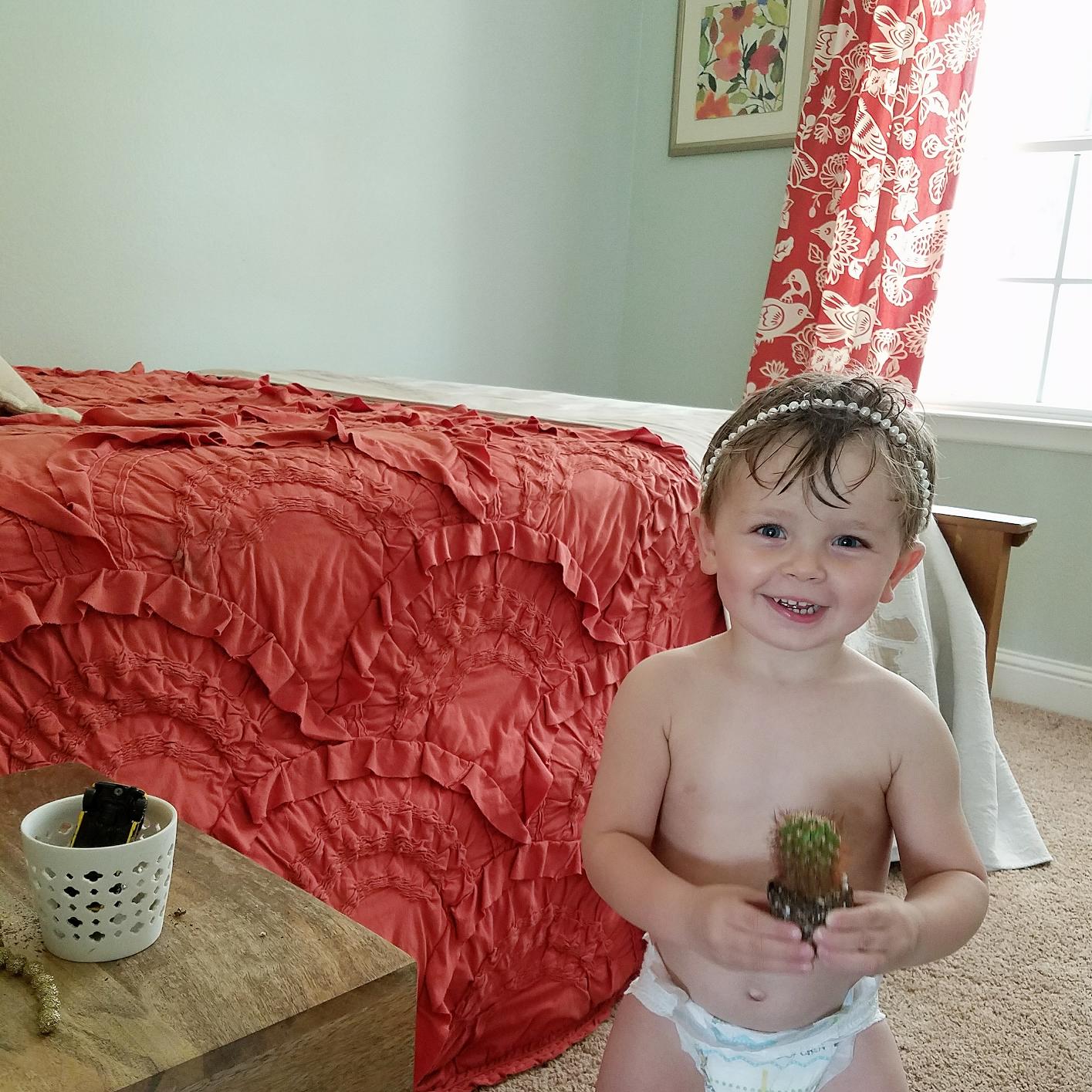 Theo has been SUCH a helper, replacing cute little cactus decorations with toy cars and wearing his sister’s necklace on his head so we don’t have to put it back where it goes. So thoughtful.

And speaking of the house, I did manage to get pictures of (almost) the entire thing, so as soon as I get a chance to edit those, I’ll do a post or two.

Aaaaand, now I’m off to do a list of things longer than my arm. Our Tuesdays are always hectic because they start with school/chores, continue to piano lessons + errands + teaching 2 gym classes in town, and end with getting dinner on the table and everybody ready for bed (and then falling onto the couch in exhaustion). It’s a long day for everybody, but I’m always pretty impressed with what troopers the kids are.

Thank you again for all of the kind thoughts and prayers. I appreciate them more than you know.

0 thoughts on “This and That”