If there is such a thing as a Moving Mambo, I think we might be doing it. It goes a little something like:

Clear out dining room area so the table will actually fit…clutter up the kitchen island.

Wash all laundry while painters are upstairs…rewash half the loads when they come out smelling like paint fumes.

Put away all of the dishes in the cupboards…pull them all back out so the cabinet guys can rehang the cabinet because your mixer won’t fit under the cabinet by 1/16″ due to the awesomely chunky nature of your concrete counter tops.

In other words: 3 steps forward…2 steps back.

BUT! Note that that still puts us 1 step farther forward than we started out. I’ll take it.

That said, here are a few things I’ve learned over the past two 1/2 weeks.

1. I raved about what a pretty color Simply White by Sherwin Williams is. And it is! In oil paint. It’s the color of my white upper cabinets and all of the ship lap in the house, and I love it! 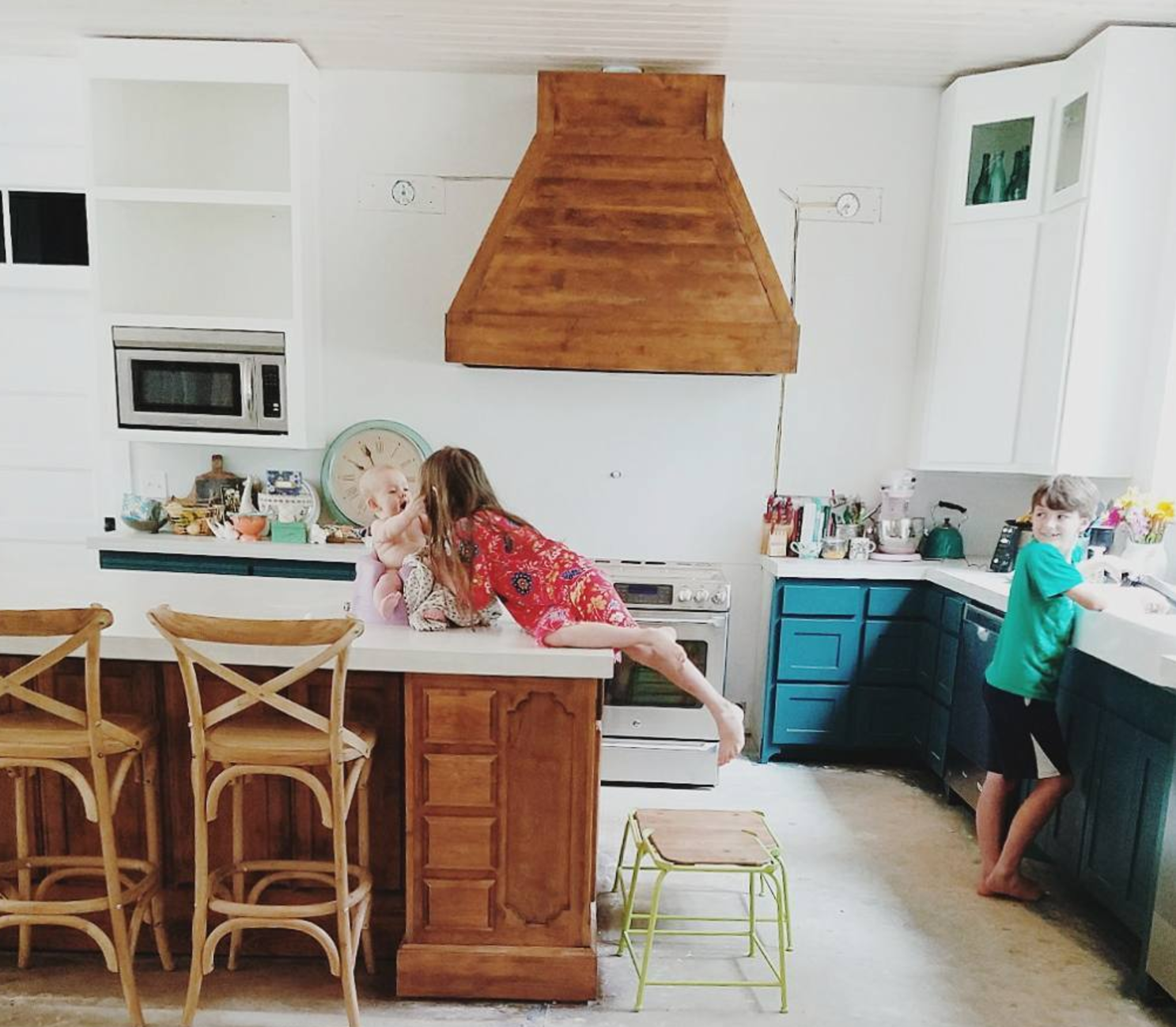 See the white cabinets? No yellow! Also, the range hood is huge for a reason. We’ll have two ovens side-by-side underneath because two 30″ was a loooooooottt cheaper than one 60″ range. (Also, I had Della stand by Honor specifically for this picture; I was standing by him at the island before, and at no point was he left alone on there).

Imagine my confusion, then, when the exact same color on my walls was yellow. Like, a lot. I don’t have a picture, but it was such a jarring feeling to see the point where the wall met the ship lap and realize that they were the same color. Even Shaun, who is red-green color blind and not the best gauge of colors in general, could see the difference and didn’t like it.

2. Sherwin Williams Pure White IS a true white. No yellow at all. We ended up repainting the living room in it, and it’s such a gorgeous crisp, bright color (or lack thereof). Definitely going with it for the white in the rest of the house. I even chose it for the exterior trim! 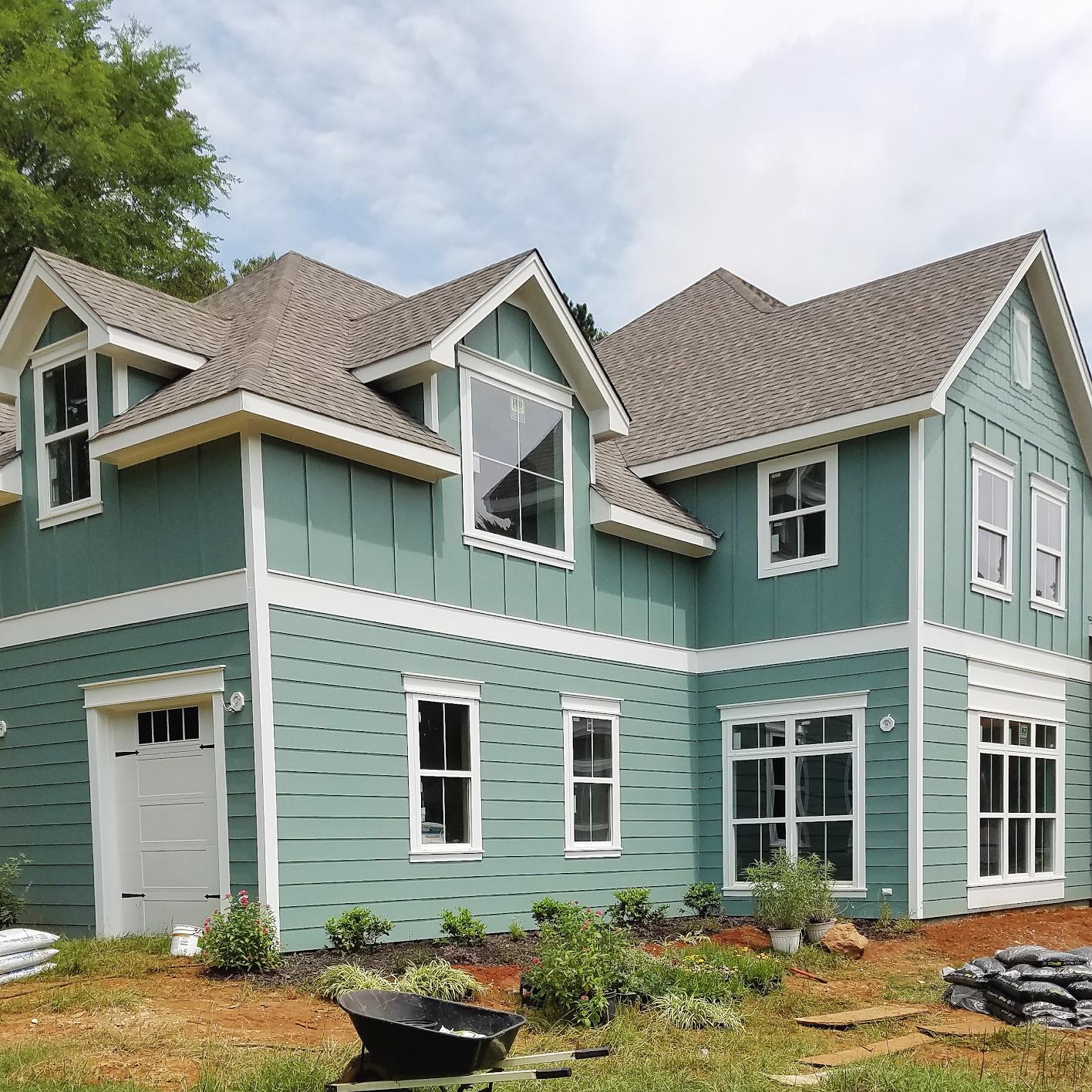 Woooohoooo! Lookee there at that pretty white trim AND landscaping…which…my mom is doing for me. While I vacuum all of that red dirt inside over and over and over…

3. Not having kids sleeping in your living room will do WONDERS for your sanity. I was borderline twitching the other night, literally feeling like moving was the biggest mistake ever. And, even though I could logically identify my emotions as a major overreaction and just all-around lie, it wasn’t until the kids, my dad, and I took the time to move all 240 (!!) boxes of flooring out of the schoolroom and all of the kids into it to sleep (thus freeing up my living room floors at night) that my brain felt like it could begin to truly relax. Apparently, I really need that hour before bed without little eyeballs on me to recharge. 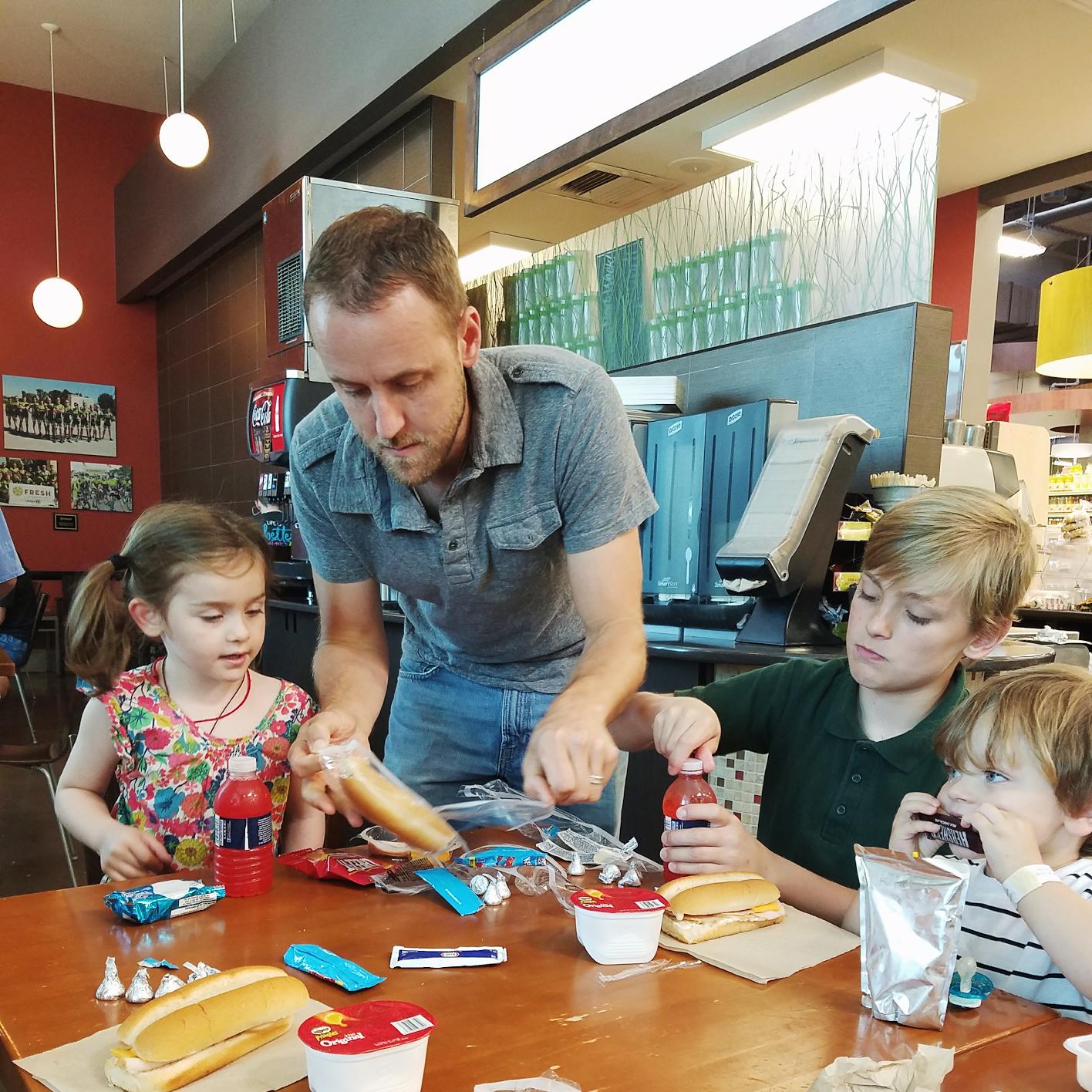 Something else that recharges me: spending time with this guy. Yeah, that hottie who is happily serving his kids (their oh-so-nutritious special lunch of choice on Father’s Day) on his special day.

4. Prayer has a major effect on my perspective. Duh, right? But it’s amazing what praying for the 7 men who are in every room of my house by 8:30 in the morning does for my attitude about their presence. I still don’t love it, but it makes me feel less like a cat on a sheetrock and power-tool covered porch (I think that’s how the saying goes?). 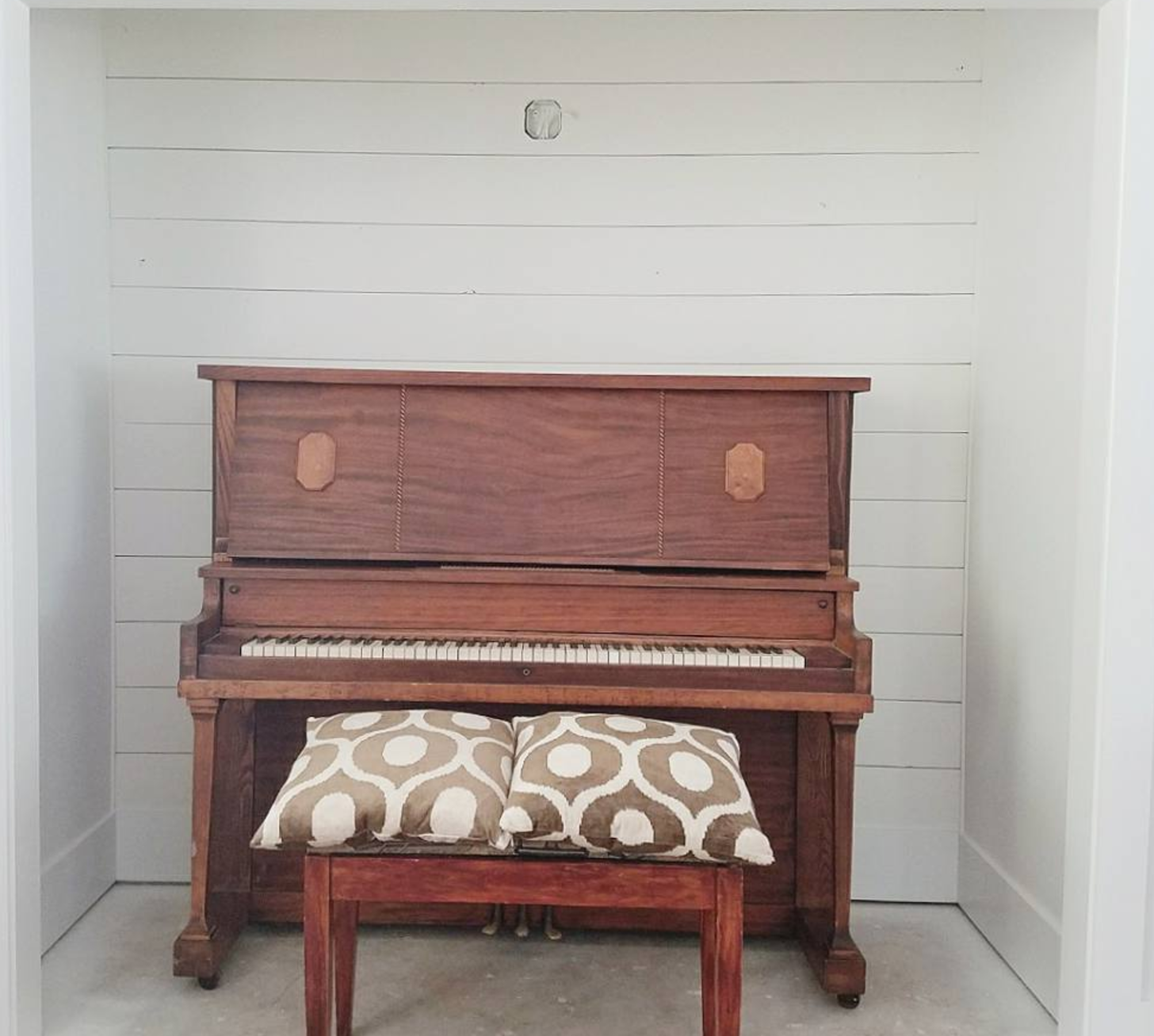 Another thing I prayed for for YEARS: this piano that fits perfectly in the piano nook we designed in the house long before the Lord ever answered that prayer with this beauty for $100!!

P.S. While I am typing these words, painters are adjusting ladders in rather ear-splitting fashion, there is the constant whine of a saw in the background, and the ever-present soundtrack of my life is blaring Tejano music. #sanctuary 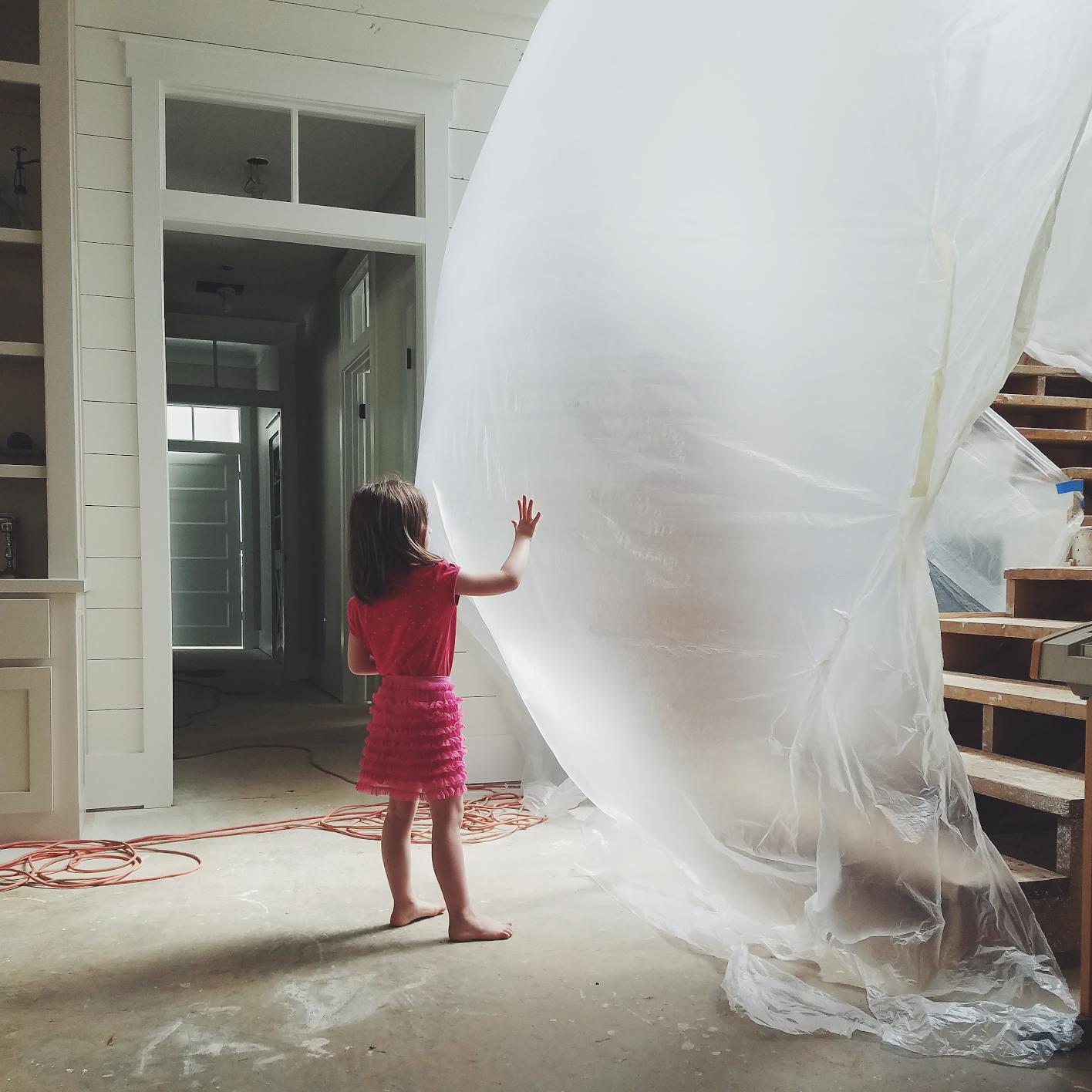 Upside of having painters in your house? The cools toys…like plastic sheeting…apparently.

5. You can use exterior paint inside. Technically, it’s frowned upon because “the formula’s not the same,” but according to our paint guy, latex paint is latex paint, for the most part. Which is good news, since it means I can use the “fixed” color of our exterior paint goof on the inside. And that’s just what I plan to do.

6. A sink can be life-changing. Or something close to it. Our giant (51.5″) sink from NBI Drainboard Sinks is practically my favorite thing in the house. It’s equally split between the two sinks, but one is deeper than the other (the left is 8″, the right is 11″). I gravitate toward the shallower one for rinsing things–grapes, cups, babies–but I can pile practically anything in the right side at the same time, so there are no dishes on my counters, even if there’s a full load to do. It’s made from cast acrylic, which is durable and super easy to clean. I’ve only been using it for 3 weeks, so but so far, it’s held up beautifully, and–ask Shaun–I’m prone to go off in raptures about it while washing off Theo’s muddy feet or scrubbing an entirely submerged cookie sheet. Just for full disclosure, I did receive it at a discounted price, but I had already asked Shaun if we could buy it outright before I ever collaborated with NBI Drainboard Sinks, and he said yes. Even at full price, I think it’s a good deal because farmhouse sinks that are 40% smaller are going for the same price. There’s just nothing else like it (that I’ve found) on the market, and it has made this mama of many’s life so much easier already. I’m a huge, huge fan. As are my boys. We went with double dishwashers, and they love that they can rinse/load simultaneously without bonking elbows. I’m not exaggerating one bit when I say that they’ve actually thanked me for getting such a nice sink (they’re my primary dishwashers in the morning, so it makes sense for them to be excited by the upgrade). 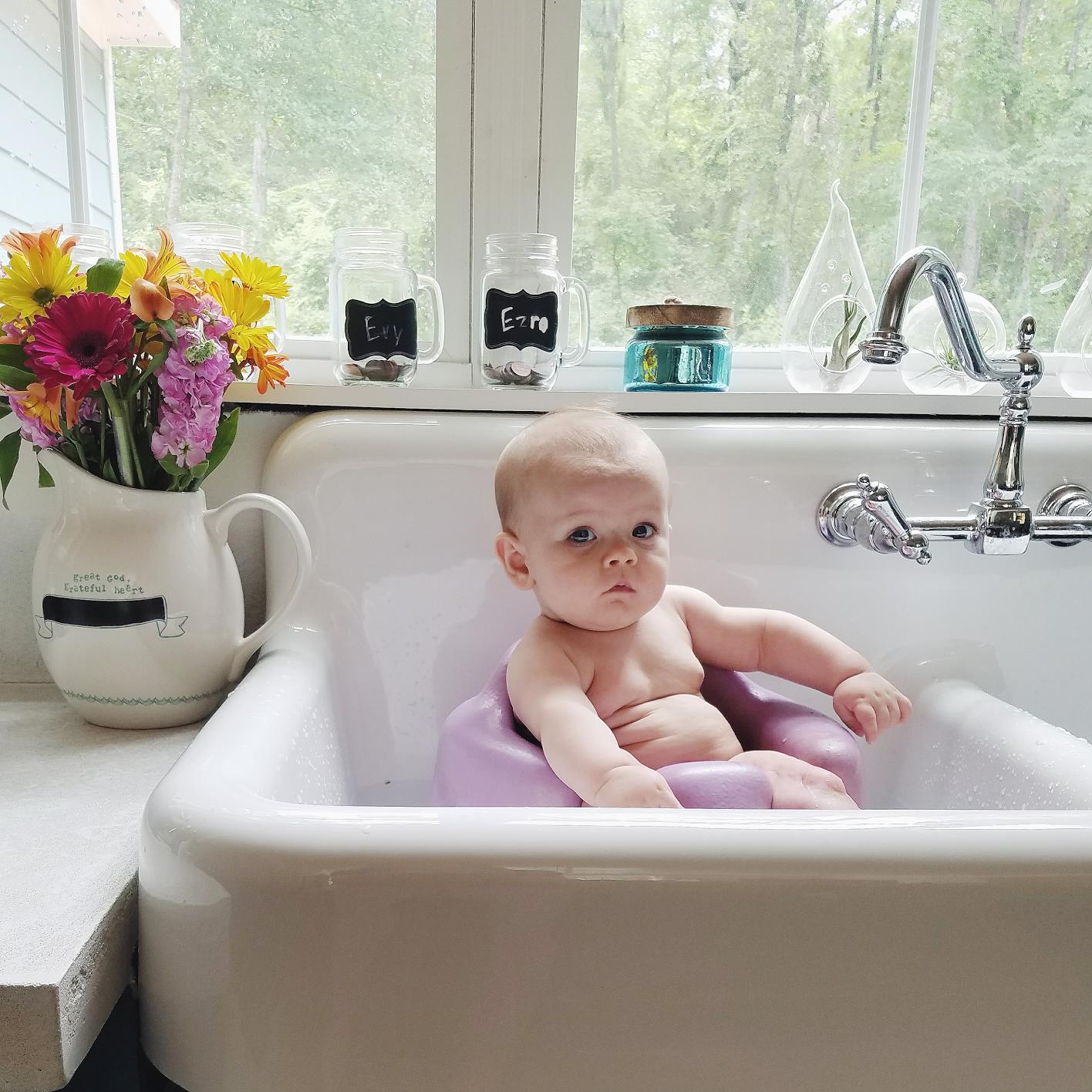 I almost feel bad for posting this picture of Honor with all of his rolls hanging out, but, honestly, when else is it just so stinkin’ cute to be this chubby? Never. That’s when. He doesn’t look too enthused about his bath in the awesomest sink ever, but I promise he loved it.

Honor has gone from being a solid 10-hour sleeper to trying nonsense like waking up every hour and 1/2. And no, it’s not the 4 month sleep regression…because he’s FIVE months now (how???) and his 4 month sleep hiccups were a mere blip compared to the sleep deprivation he’s been putting me through for the past week. Basically, we need to get our sleeping arrangements a little more spread out (i.e. move everybody upstairs once the paint stink from all of the oil enamel is gone), so he doesn’t sense me (from his pack ‘n play all of 2 feet away), and I think we’ll be back on track. Hoping to get there by this weekend.

I’m sure there’s much more I could share, but I’ve already written this post in shifts over days, so I should probably hit publish before it languishes as a draft for another week.

OH! Before I go, though, I wanted to ask: what kind of posts would you like to see me write about this house-building experience?

I’ve already been asked about where I find my deals (I’ve shared a lot of those, but if you have more specific questions, I’ll be happy to share) and how we came up with/went about designing the layout and exterior of the house. I’ve also had various questions about how we took large family dynamics into account when building. I’m happy to blog about any of the above or anything else y’all are interested to know. I’m just trying to get a gauge for which topics interest the most people.

P.S. If you want to see more daily pics of our house progress, be sure to follow along on Instagram. It’s the only place I seem to be able to post daily right now.