How ’bout that original title, yo? But seriously, you guys. I have no excuse for disappearing except that I have been doing more living than writing about it. And, while all of the memes would tell me that that means that I must be doing something right (and they would be correct), I can honestly say that I’ve missed “chatting” with you guys here in this little corner of the internet. I have a plethora of half-written blogs floating around in my brain:

But I don’t really have the brain power right now, at 10:23 PM, to be terribly topical, so I’m just going with the ol’ fire hydrant approach.

So, what have we been up to? Well, some exciting house updates, for one.

**As a quick follow-up to my tile gaffe post, we did some scrubbing on it, which lightened the grout a bit it and made it less noticeable, and after talking to a friend who is also a tile expert, we’re just going to let it breathe for a while, try out some rugs, and then go from there. If we absolutely cannot take it, we’ll rip it up and start again. Or paint the entire floor. Or…something. But I’m hoping it doesn’t come to that.

I ALMOST feel sheepish telling you guys about the things that we’re NOT doing on this house currently, considering what big DIYers we are and how much we have invested until just recently. Almost, but not quite. Because you know what’s better than bragging rights on doing it all yourself? Having it DONE. (We’re still doing all of the finish work on the exterior, the interior plumbing, the rest of the concrete counter tops, the lighting, the electrical, etc., so yeah…it’s still pretty busy around here)

And done is where we are (or at least close to it) with our floors. 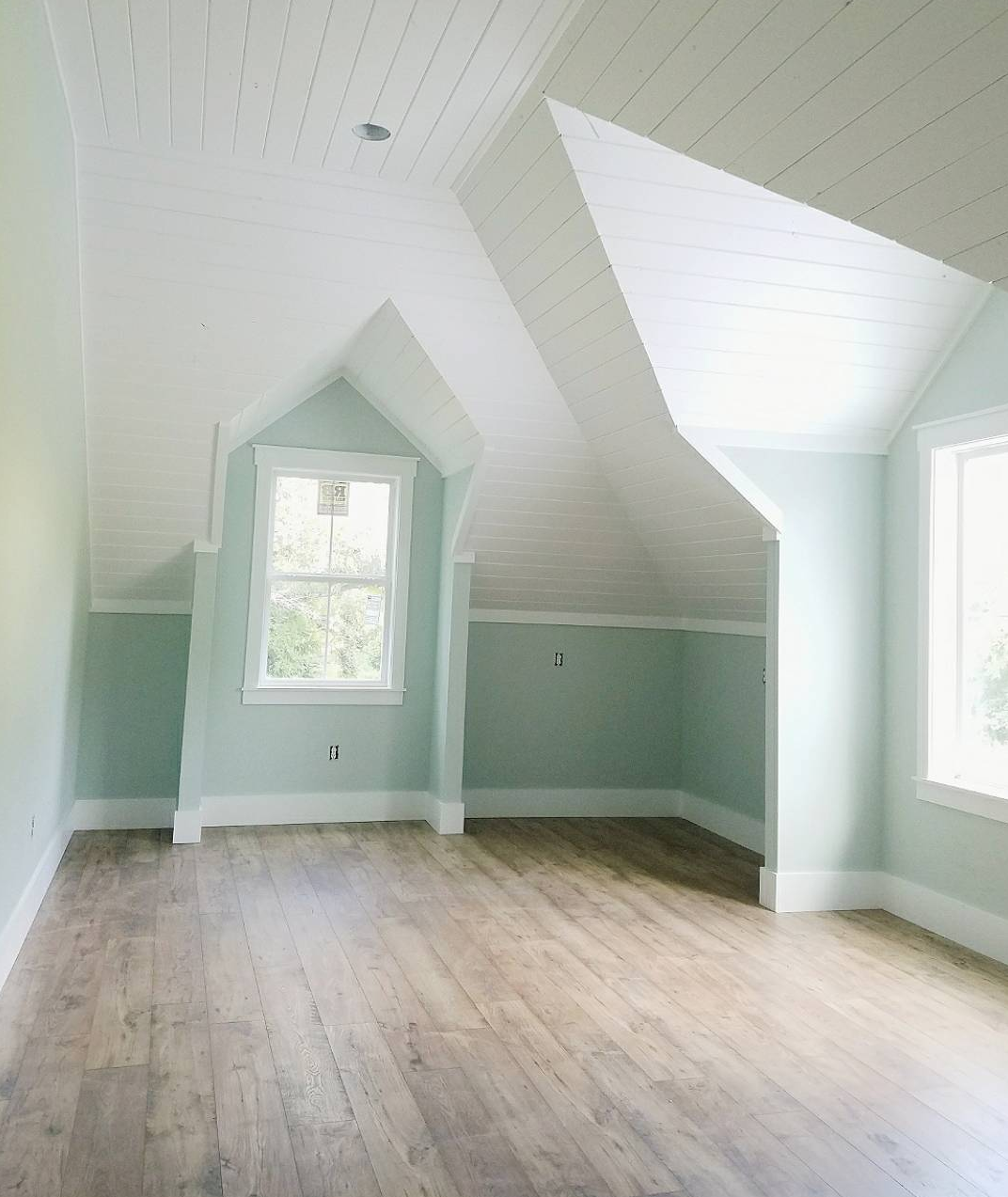 We found a crew to lay our laminate “wood” floors (brand: Mohawk, color: Rare Vintage Fawn Chestnut…because just calling it one of those words would have been way too vague #verbose), and they’ve aaaaaalmost finished TODAY…but we ended up a bit short on laminate. Sigh.

Even so, all we lack is the loft, which means that we can start actually cleaning things so that they stay clean (you know, relatively). And then moving furniture where it actually belongs…instead of its languishing in piles in the workshop and garage or being shuffled around from room to room. 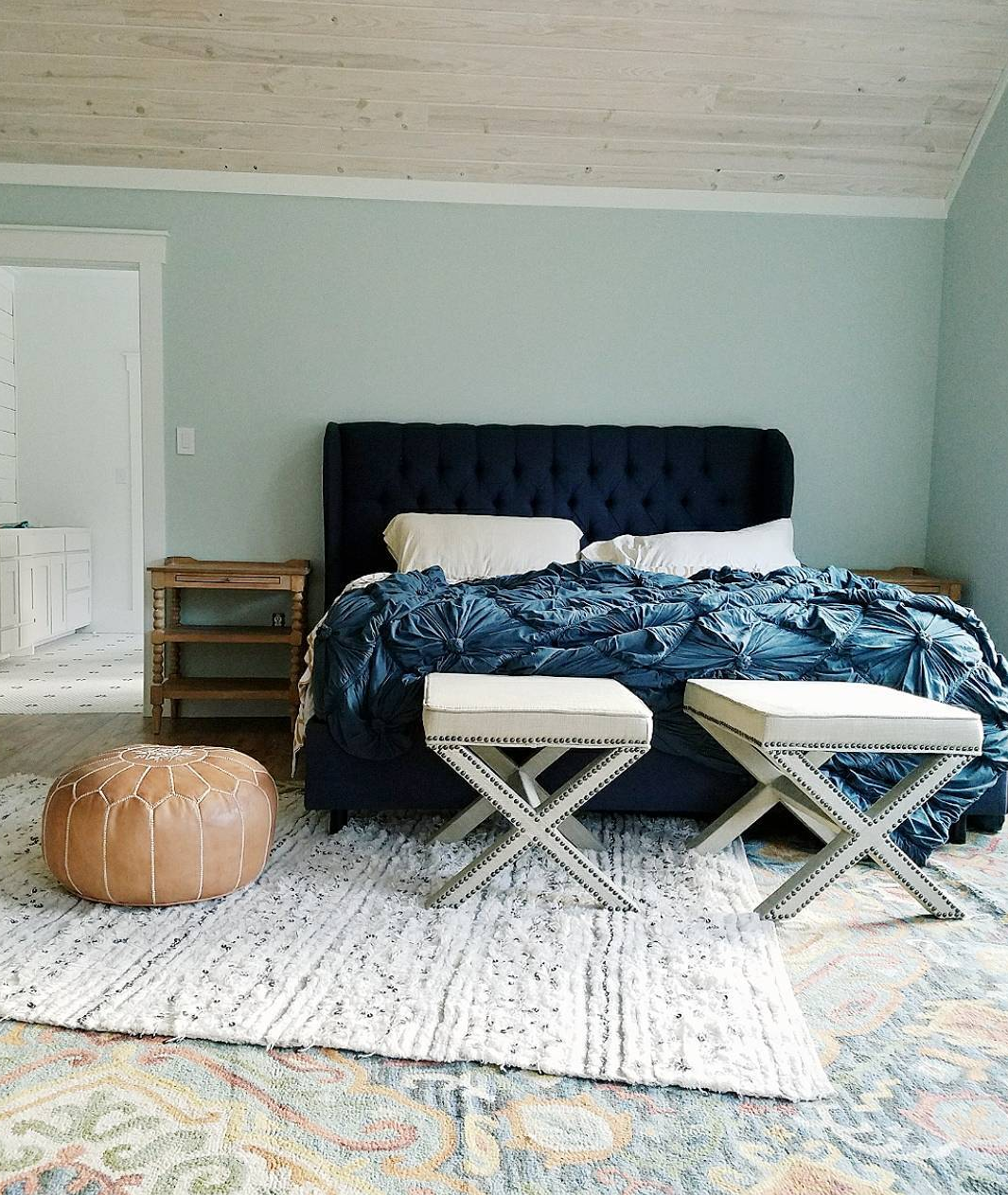 Our master bedroom was the very first floor they laid, and we set up the furniture in it that very night!

The piece of furniture I’m most excited about hauling out of storage? 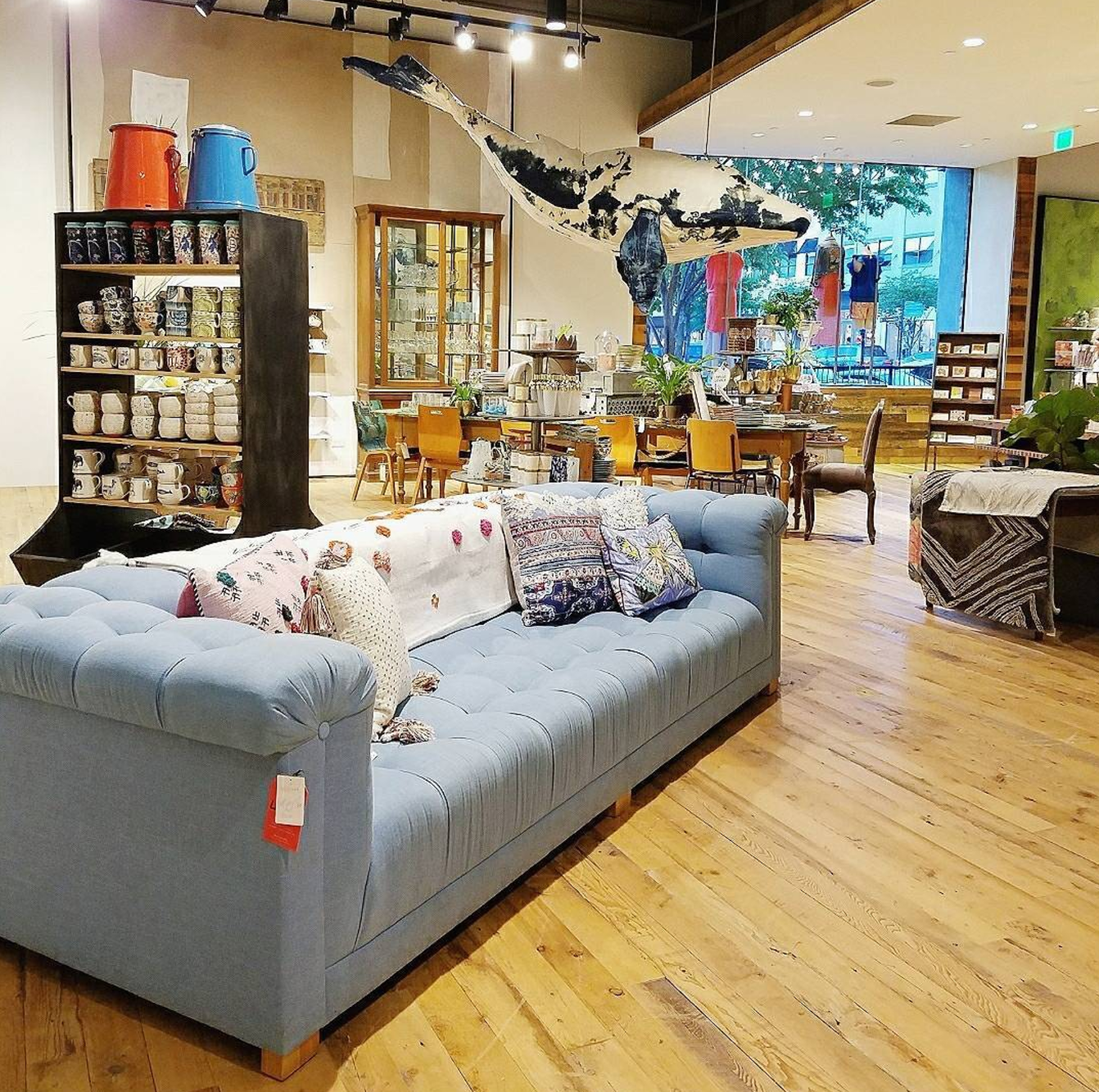 This amazing couch I scored at Anthropologie (yes, I bought furniture from Anthro…wild). It’s 10 (!!!) feet long, the coolest shade of blue, and was a fabulous deal, since it was a floor sample. (Especially jazzed, since right after I bought it, they stopped selling floor samples altogether).

Mostly, I’m just excited about the concept of things being more finished than not because we’ve been in a state of flux in some state or form for a good 6 months now, which, while not a huge span of time in the grand scheme of life, is enough to make this creature of habit a bit antsy at times. (Ask Shaun about my meltdown about the ugly burn pile in our yard; or better yet, don’t).

What else? While we’ve been “doing school” all summer (I have the three oldest continue with their basics at a slower pace and diminished amount), we officially started back at our home school co-op last Monday, and I am loving the chance to dust off my teaching chops.(Weird metaphor…did I mention it’s late-ish?). 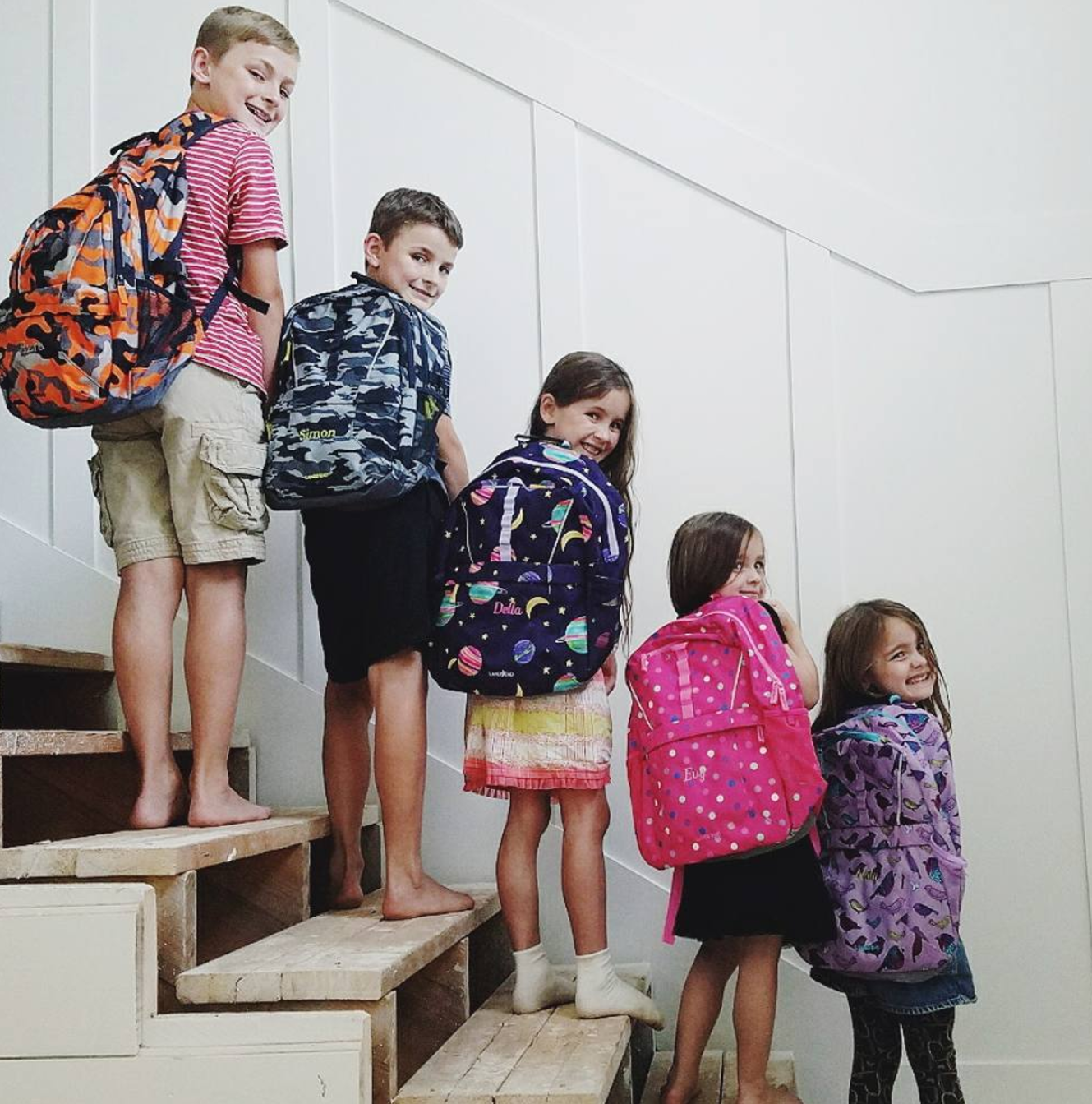 I did something I’ve never done and bought the oldest 5 BRAND NEW personalized backpacks from Land’s End. They were on sale (of course), but the thing I like most is that they have a lifetime guarantee, so if (when) they snap a strap or rip a hole in the bottom, I can get a brand new replacement for free (crazy but true…and no, I’m not being paid to say this).

I was laughing with Shaun about the fact that, after hearing from my kids about how most of their teachers just spent the first day going over rules and having everyone introduce themselves, I felt like I was probably the only nutter who hosed my students down with tons of notes and grammar and 4 take-home assignments. I’m sure that’s not actually true, but it’s definitely my personality. I can’t seem to reign in the desire to stuff AS MUCH info as possible in their young brains for the 55 minutes a week that I have each of my classes.

It helps that I’m teaching eager-beaver homeschoolers, for sure.Including Ezra, whom I am requiring to take Spanish 1 with me, even though it’s usually an 8th grade + level class. He is the eagerest of all the beavers, though, and is a joy to have in class, so we’re both pretty thrilled with the arrangement.

In other news, I have officially drunk the Cross Fit Koolaid–or sipped it, at least–and…I liked it! There’s a Cross Fit gym that several of my friends go to that has a free community WOD (Workout of the Day) that I’ve gone to 3 times now, and I can’t really begin to describe how much I enjoy it. Even though it’s really, really hard, and I’m definitely the odd woman out with my newbie–“Um, what’s a wall ball?”–self. If you’re a Cross Fitter, feel free to speak up in the comments. I haven’t dived in and paid for a membership or anything, but I am more excited about Saturday mornings than I’ve been in a while, and I am determined to learn how to do a hand stand push up or at least seriously injure myself trying.

In other news, Honor is eating everything in sight and loving life… While Theo has definitely entered his “can’t handle any emotional distress without descending into temporary madness” phase. AKA: my faaaaaavorite! 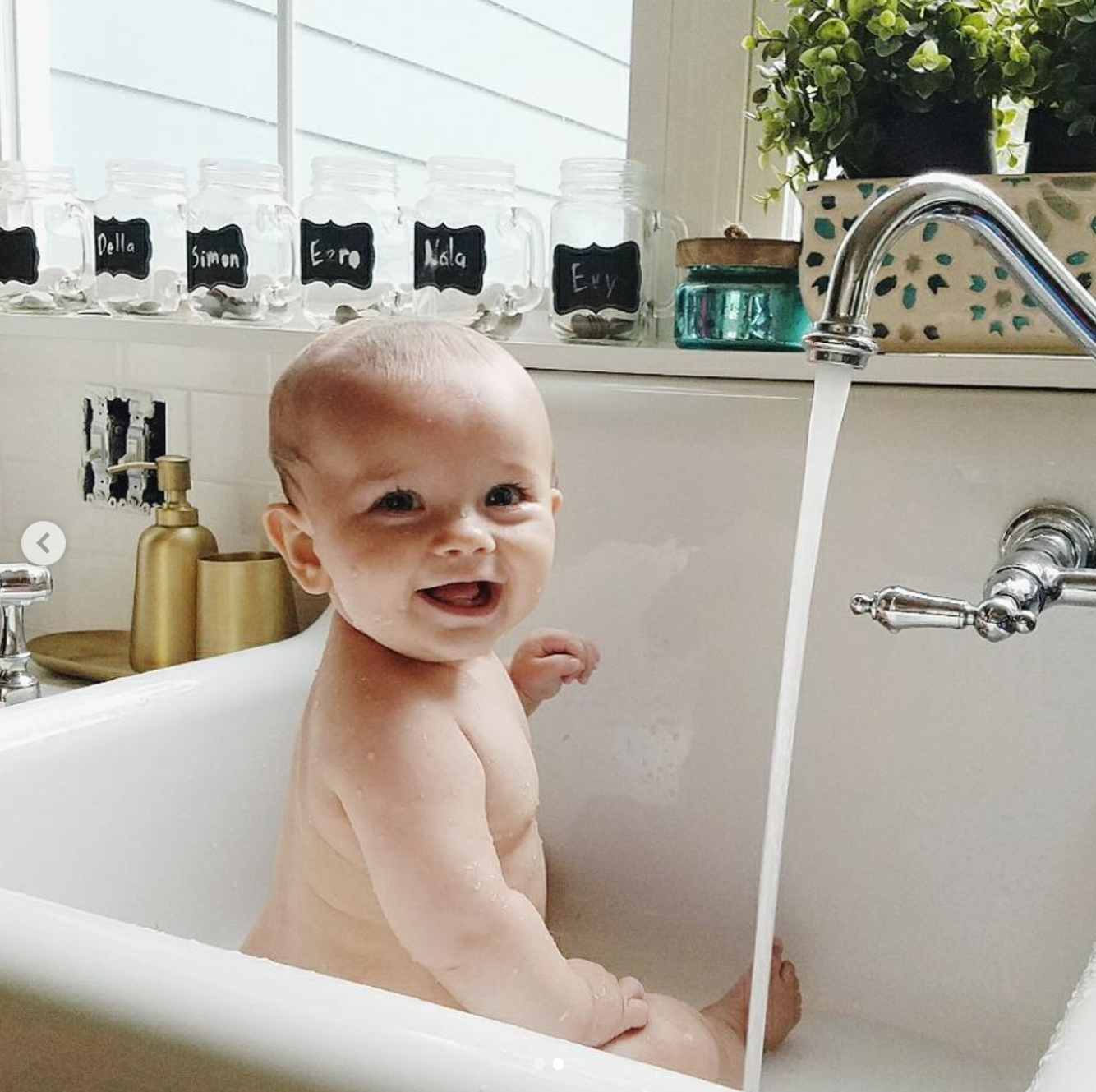 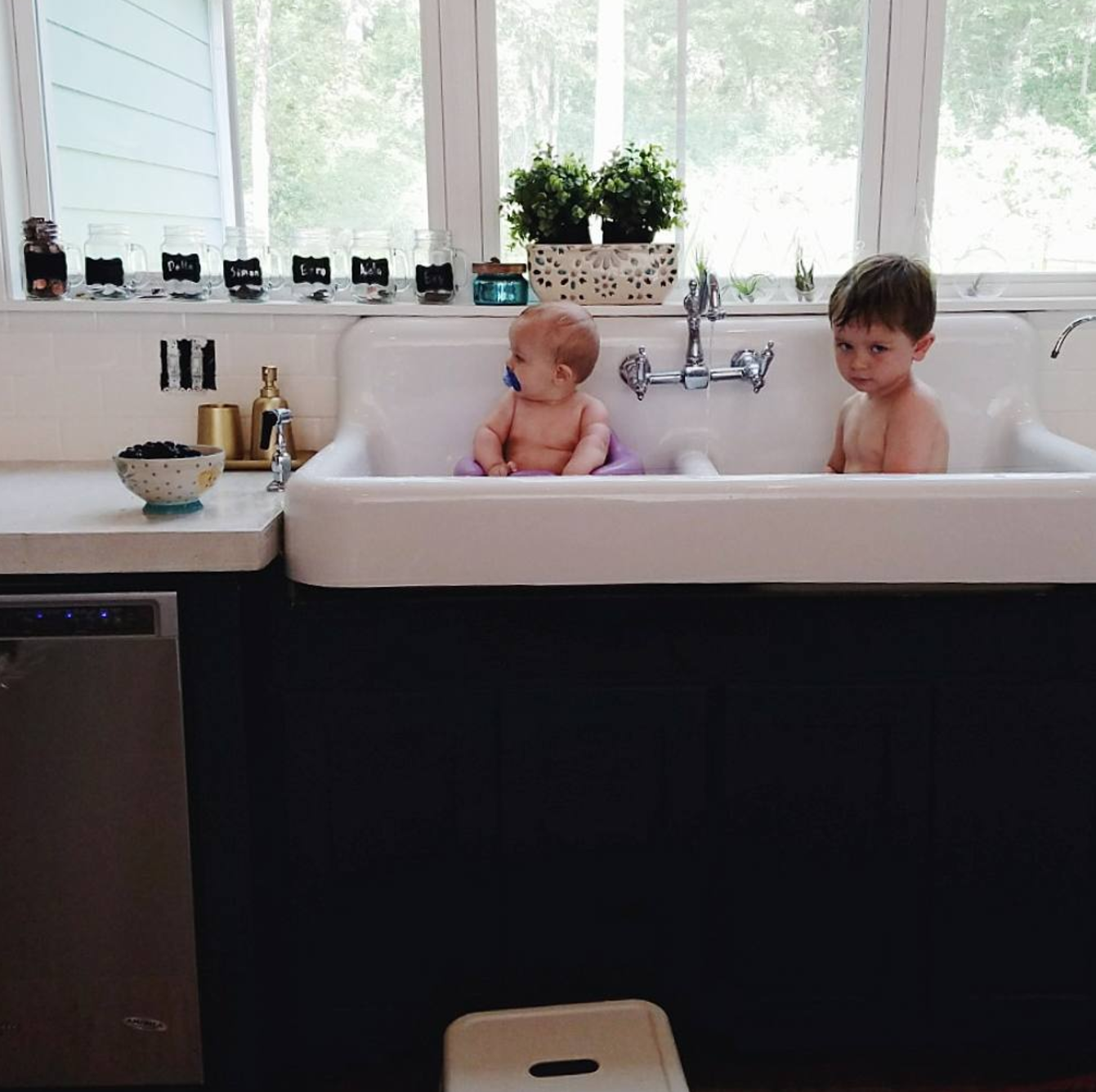 He still has plenty of cheerful moments, but he has also developed quite the formidable stink eye.

I was so hoping we would skip this stage with him because he possessed just the sunniest of dispositions as a baby/toddler. And, if I’m honest, it’s nothing like the twins’ 18-month bout of insanity, since he doesn’t despise his car seat like they did. But there’s still a whole lot screeching and “No-ing” (on both our parts) and floor-wallowing (just his…although, I’m tempted sometimes), and disciplining going on. It helps that Honor is such a dreamboat, though. I mean. Seriously. I just want to eat him with a spoon. 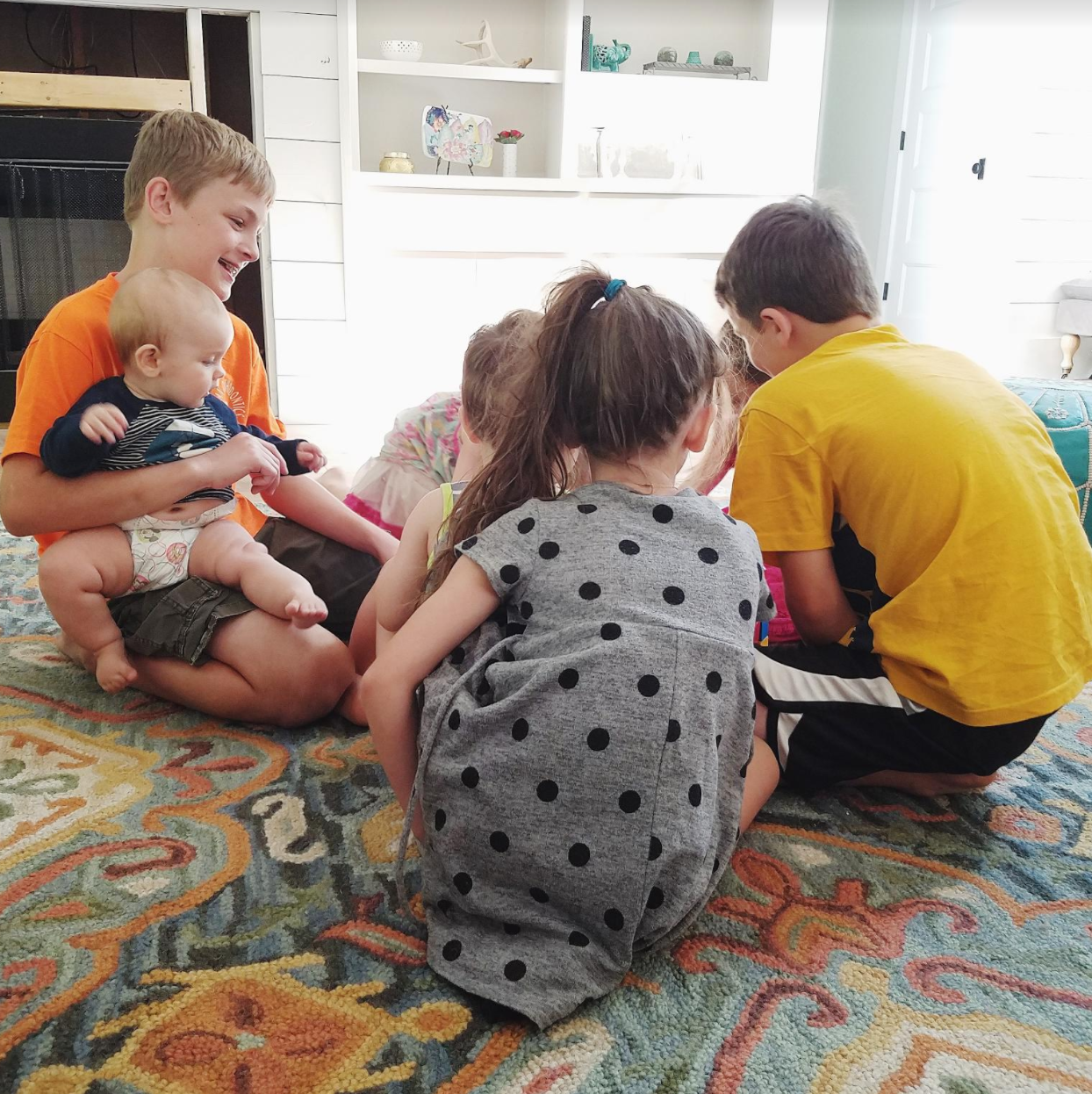 He’s 7 months now, and everybody still fights over who gets to hold him. Oh, and in case you’re wondering what has my children’s attention so completely captured, they were building Sam and Pippin (our guinea pigs) a block maze to run through.

Shaun is getting ready to tackle another big block of work trips (they always come in chunks, it seems), but the good news is that the kids and I will get to go with him on a couple (Honor will, of course, tag along by default). There’s one I’m especially excited about, but…more on that later.

In fact, more on all of it later, since I’ve jabbered on plenty for now and really need a shower before bed.

What have you guys been up to? Have your kids started school yet? Do any of you have your kids do schoolwork in the summer? Anyone else have a 2 1/2-year-old whose life-management skills have deteriorated drastically?

We can eat virtual ice cream together and chant “Hard is not the same thing as bad” while holding virtual hands. K? Cool. It’s a plan.