Who would like a 2018 Christmas tour of my downstairs…in 2019? Oh, hey. I see you with your hand raised in the back row. One lonely interested person. I’ll take it.

But seriously. Christmas was less than two weeks ago (say whaa?), and it’s only January 7th, so in my current very pregnant state of doing everything 3 weeks late (not to mention having been the world’s most remiss house-blogger for the past year), this post is practically 1 week early! (Don’t argue with hugely pregnant women’s logic; you’ll get hurt).

Mostly, this is an excuse to give you the most updated version of what our downstairs looks like. So, if all of the Christmas decor bothers you, just squint really hard, and you may not notice it. You may not be able to see anything else either, but that’s the only solution I’ve got for you (see: pregnant logic), so I’m going with it.

First up, can we talk about this tree? 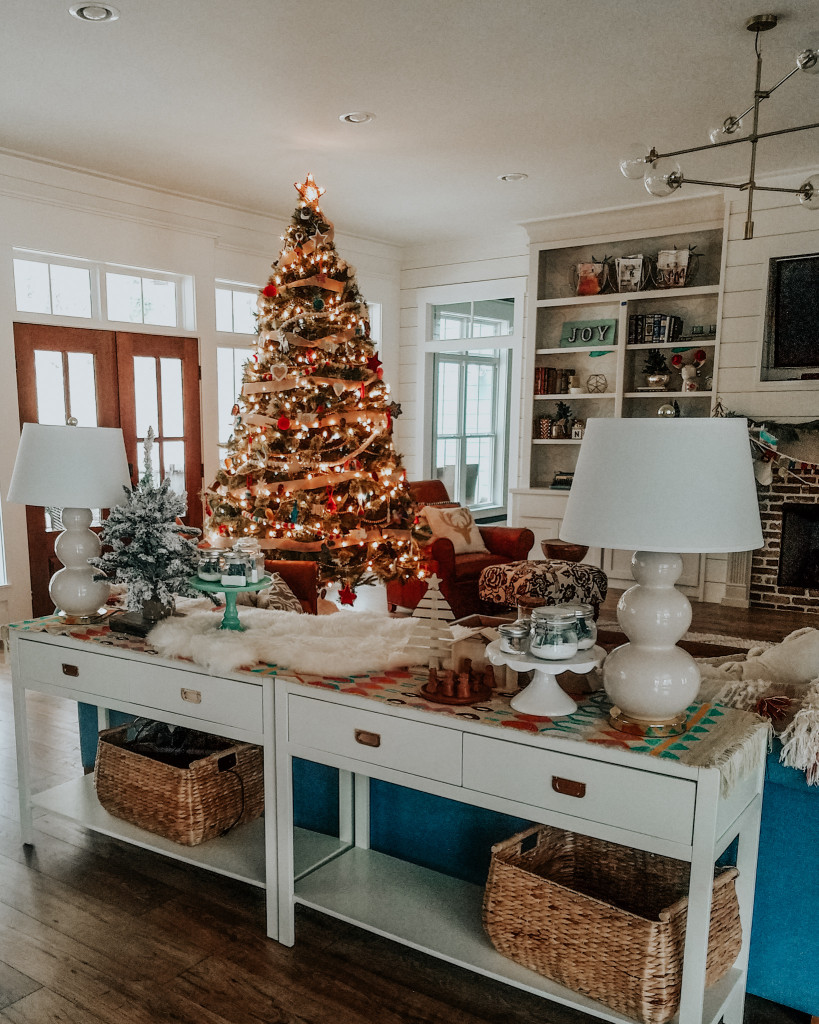 (And how I now want to reach into this picture and straighten that basket? See? Now, you do too).

It’s a 9 foot cashmere…something-or-other–can’t remember the exact description (I tried to dig it up, but it’s sold out), but it was fancy–that was originally reeeeeaaallly expensive but which I scored for a steal on Wayfair clearance on an after Christmas special last year. It sure beats the faux pine needles off of the sad little Big Lots hand-me-down we’d been using for the last 13 years. Don’t get me wrong. Big Lots hand-me-downs are awesome. And 9 foot trees can be problematic (ask Ezra, who just about got flattened by it when it fell over as we were moving it around because his Mama’s cray and waited til AFTER we’d decorated the whole darn thing to decide that she didn’t like its location). But it was a nice change of pace. I think we’ll keep it for at least another 13 years. 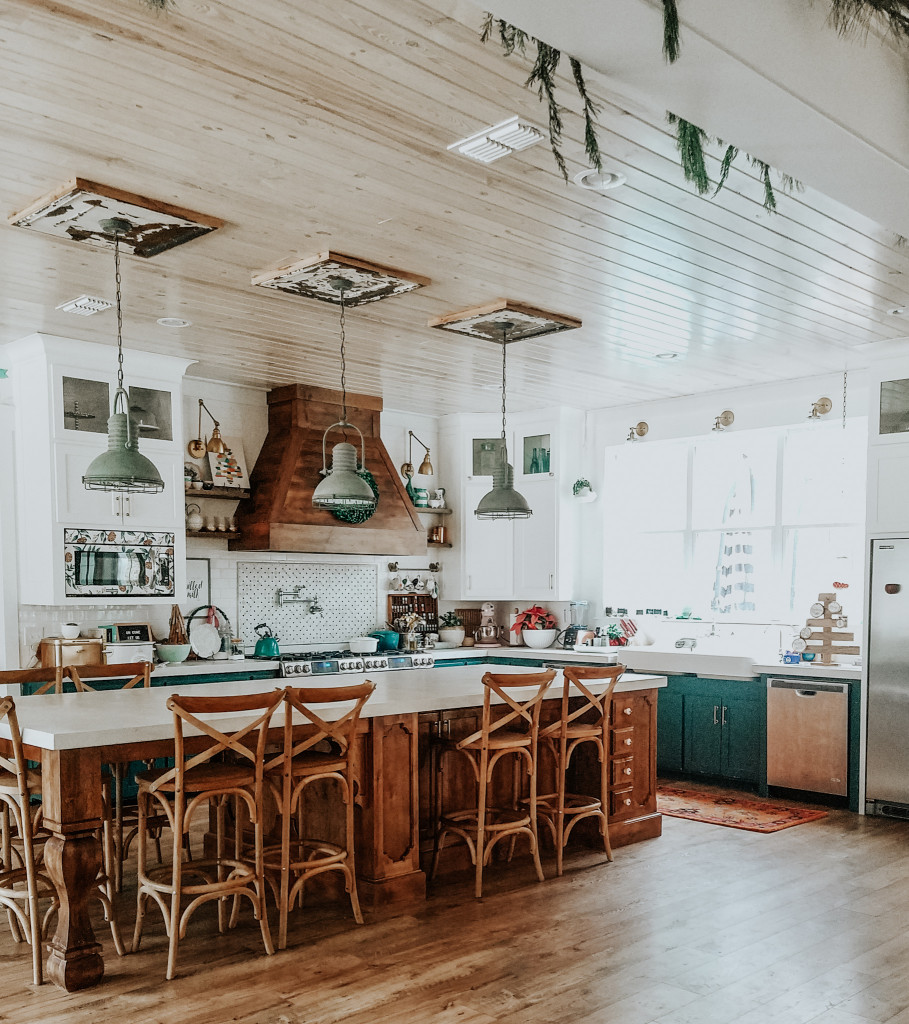 And here we have a sighting as rare as the Christmas Dodo Bird: my kitchen in pristine condition. Approximately 28 minutes after I snapped this shot, Honor and Theo woke up, and I started cutting them some apple slices, which is like some of sort of siren’s call at our house because the rest of their siblings magically materialized within seconds. And 3 giant Honeycrisp apples + 7 cups of milks, 47 Legos and 3 dolls later…my kitchen was no longer pristine. Which is fine. Because it would be awfully sad to have a 12 foot island that no one ever used. 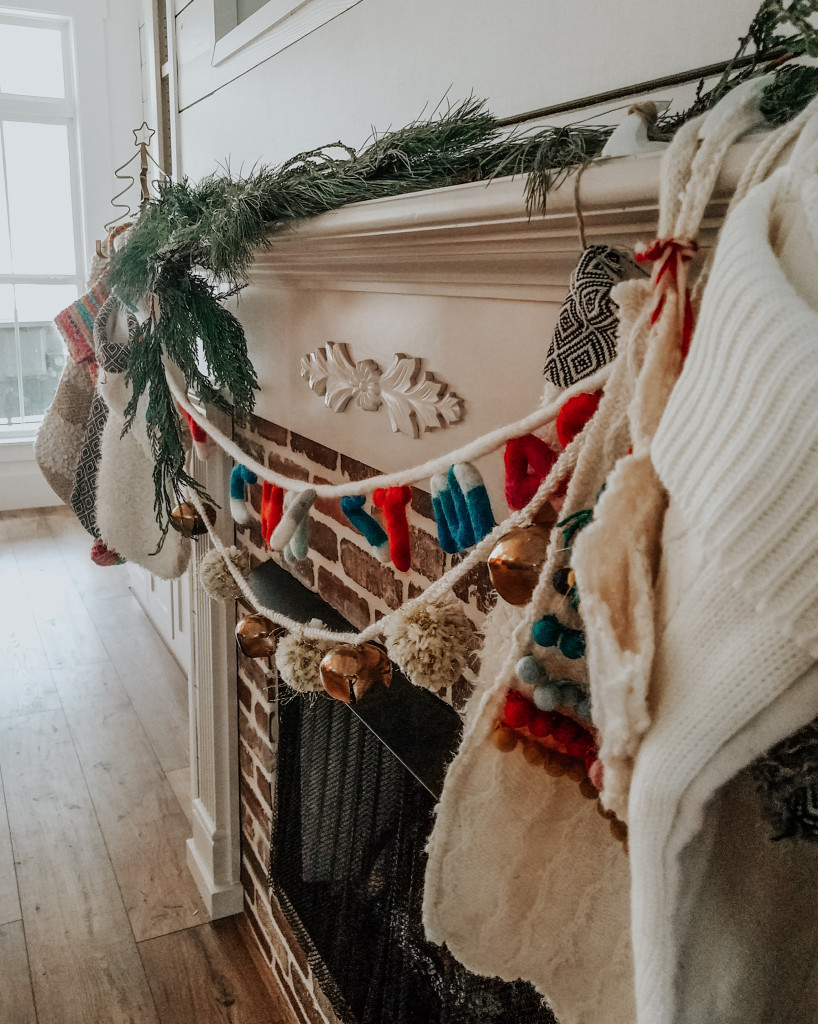 Want to know my solution for a festive feel without the alluring sparkle of shiny breakable things? (hashtag toddlers, hashtag puppy) Felt. Almost all of the ornaments on our tree are felt. Same with the pom pom garland. The Merry Christmas banner on the mantel (from West Elm after Christmas sale last year) is felt. The stockings are felt. Felt. It’s magic, yo. 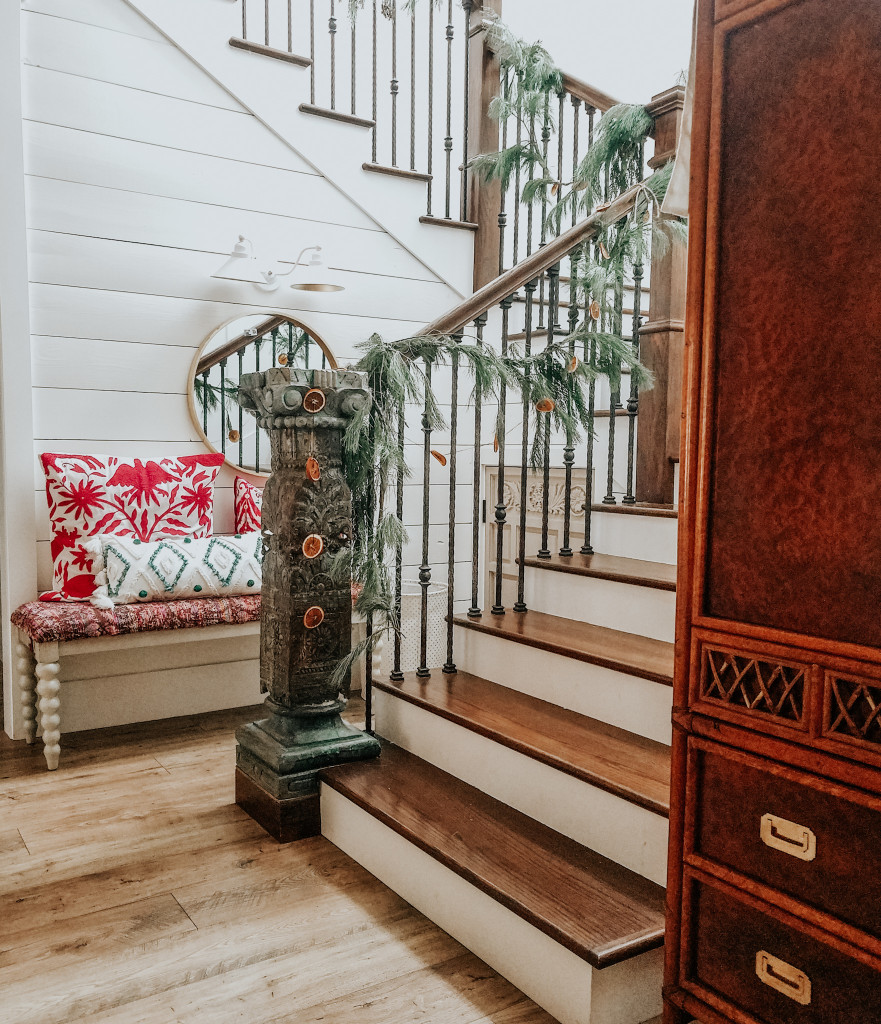 Now, how to keep your crispy, dried-up, gnarly garland (that you bought/hung the day after Thanksgiving in a fit of nesting insanity) from shedding e v e r y w h e r e ? No clue. Felt is the only stroke of Christmas genius I can claim. 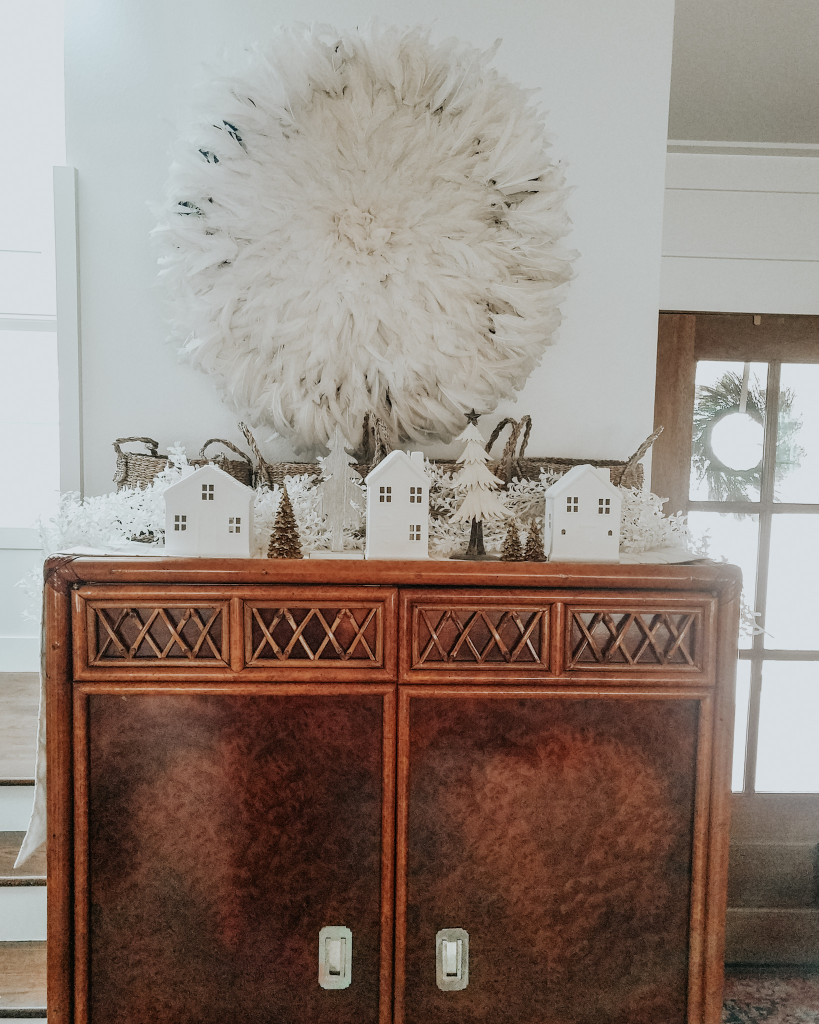 This is just about the only view in the house that hasn’t changed. The kids and I took down Christmas on New Year’s Eve, but I declared this a “winter scene” and forbade any touching of it. Which, of course, only made them want to touch it all the more. But my point is, it’s still there. 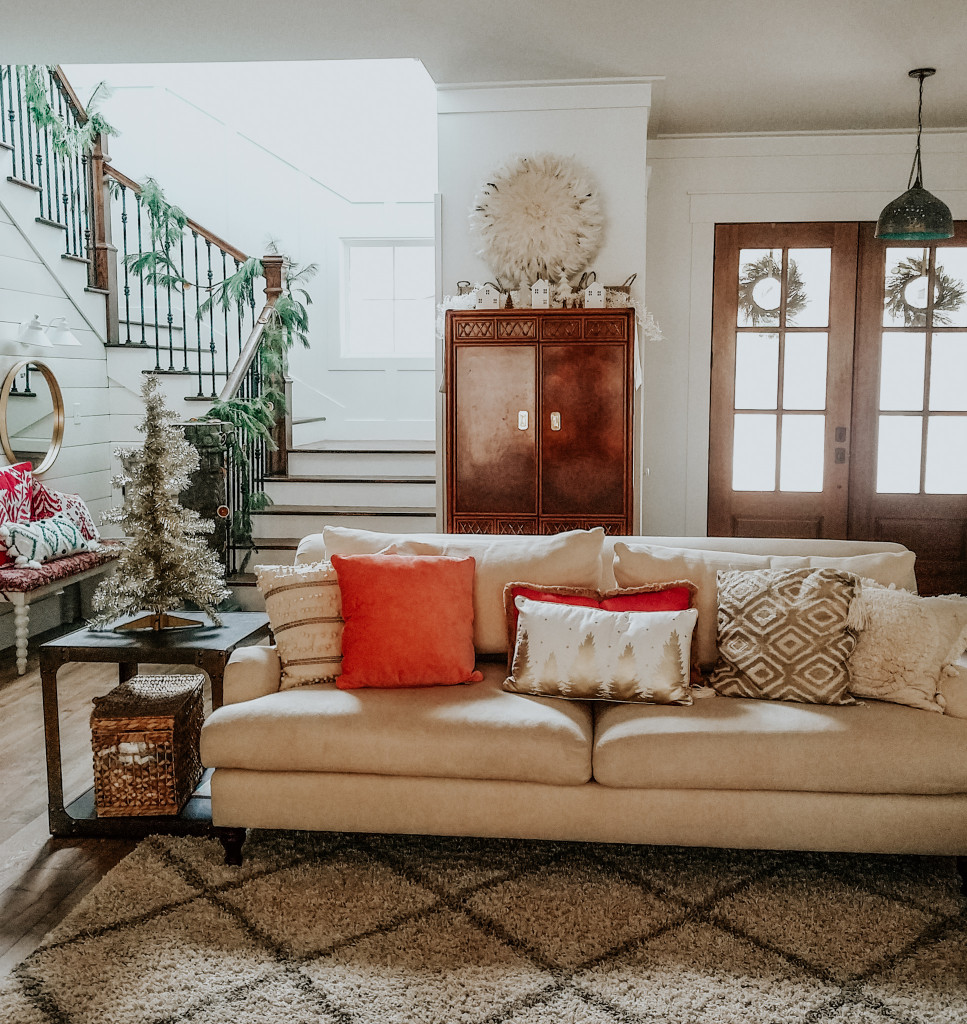 Are you wondering how anyone manages to sit on this couch with all of those pillows there? Anyone who tries to sit on it wonders the same thing. (And then, they throw all of my pillows on the ground where Ruby attempts to rip them to shreds). 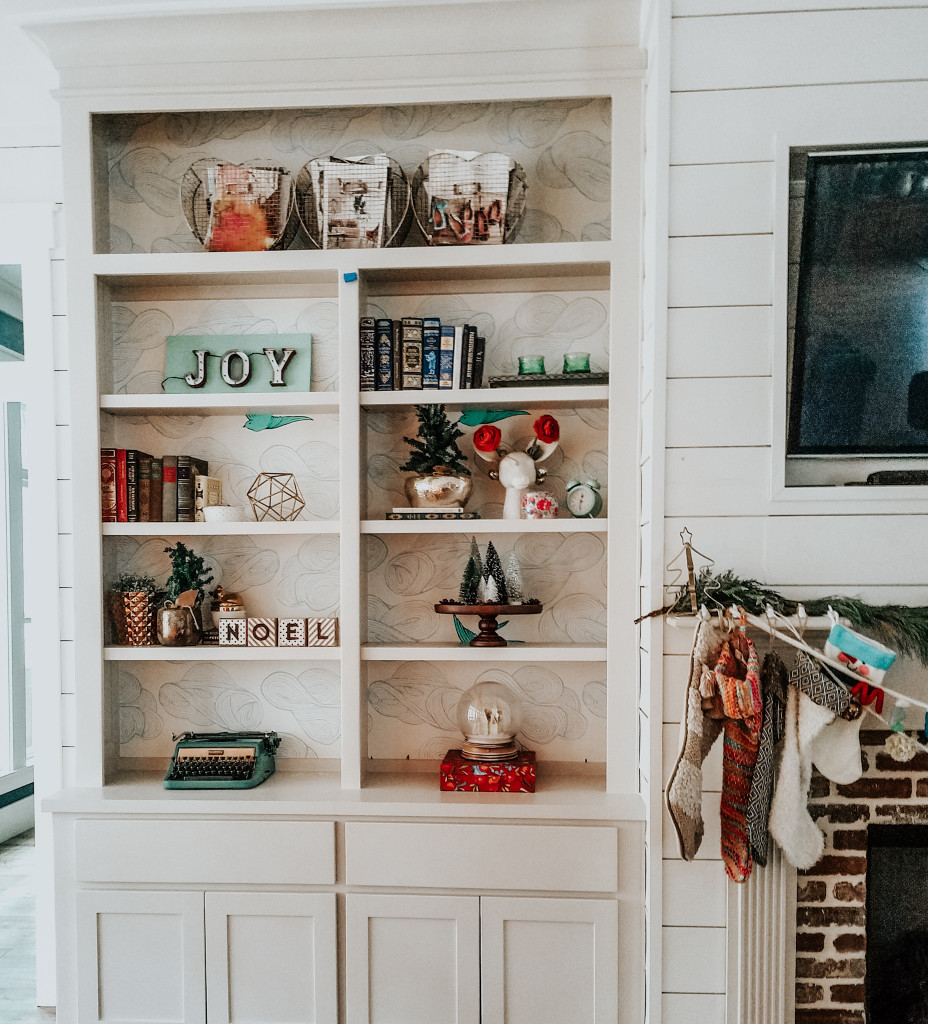 Anybody remember Fiona the Doe? I think she’s had those same jingle bells on her ears for 3 years straight, so she’s pretty much straight Christmas cheer 24/7. And I still love her. 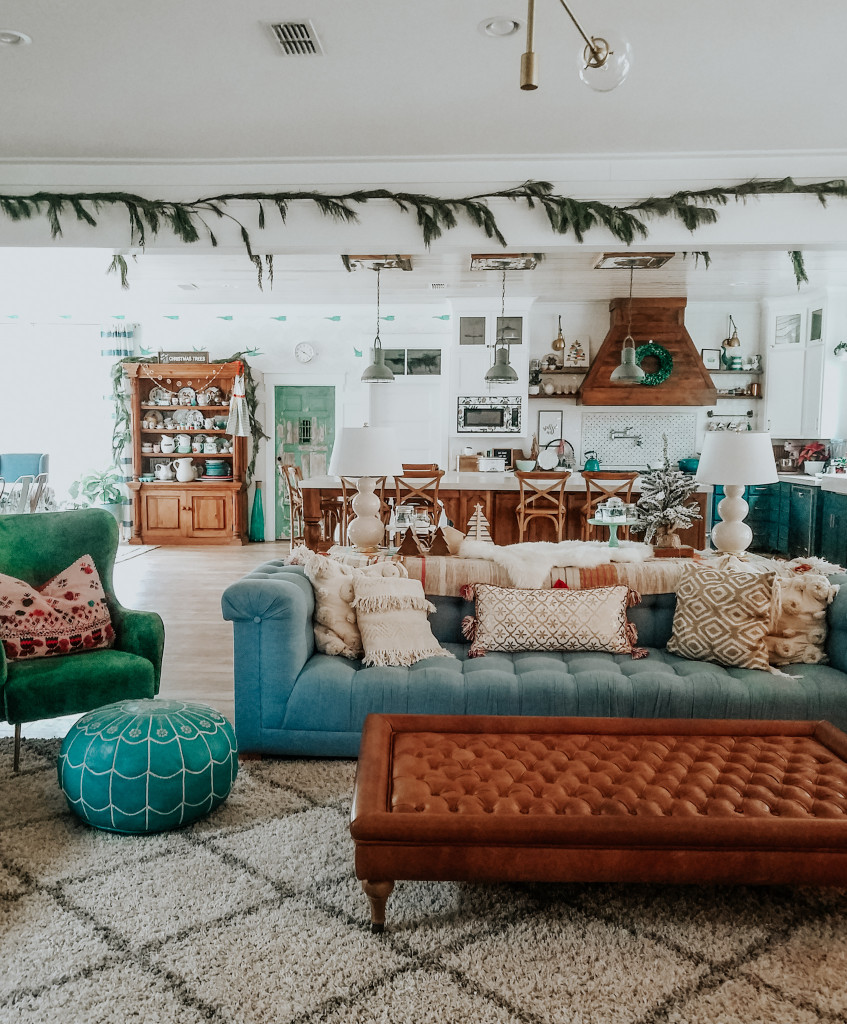 Because I always get asked by somebody no matter how many times I say it…the leather ottoman is from Restoration Hardware…originally. But I scored it secondhand for $200 (so 90% off). It’s pretty much a boat and is the best possible living room solution for our big, rambunctious family. Gorgeous, durable leather + no hard edges is a major win for us. 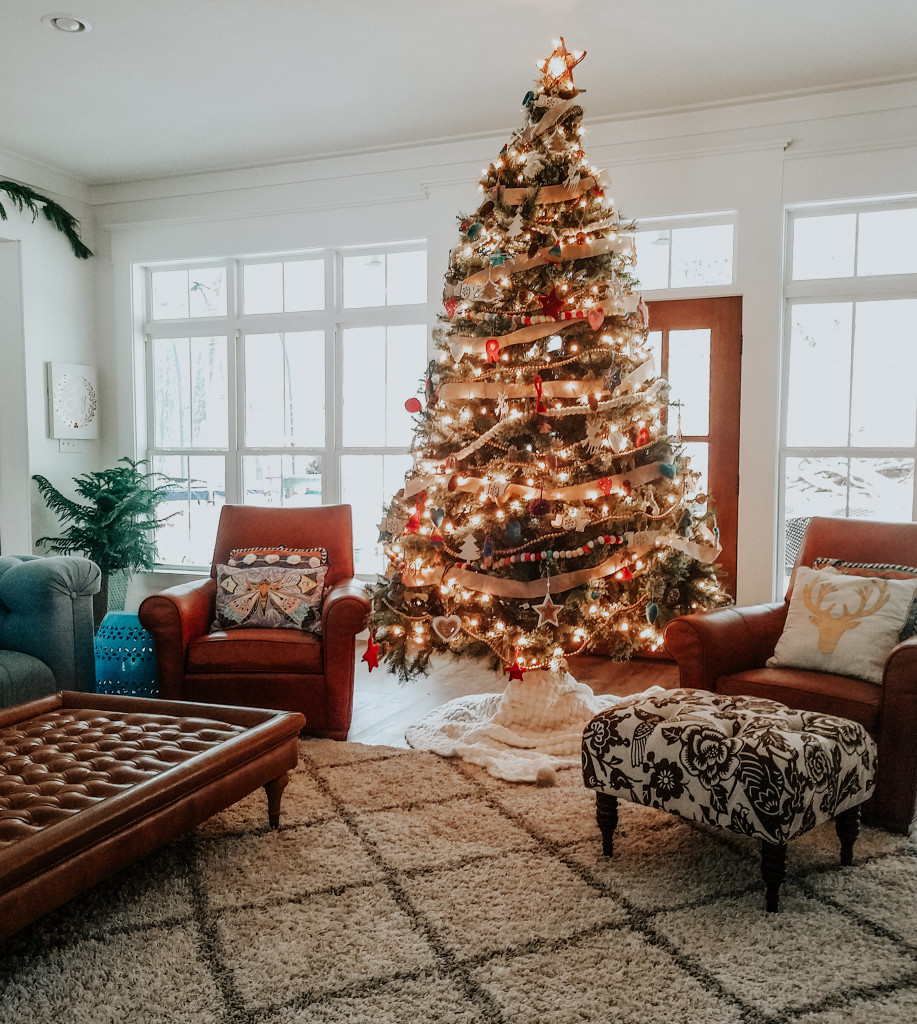 And again with the giant tree. Not pictured here are the presents that I actually managed to get wrapped well BEFORE Christmas Eve this year, thankyouverymuch. 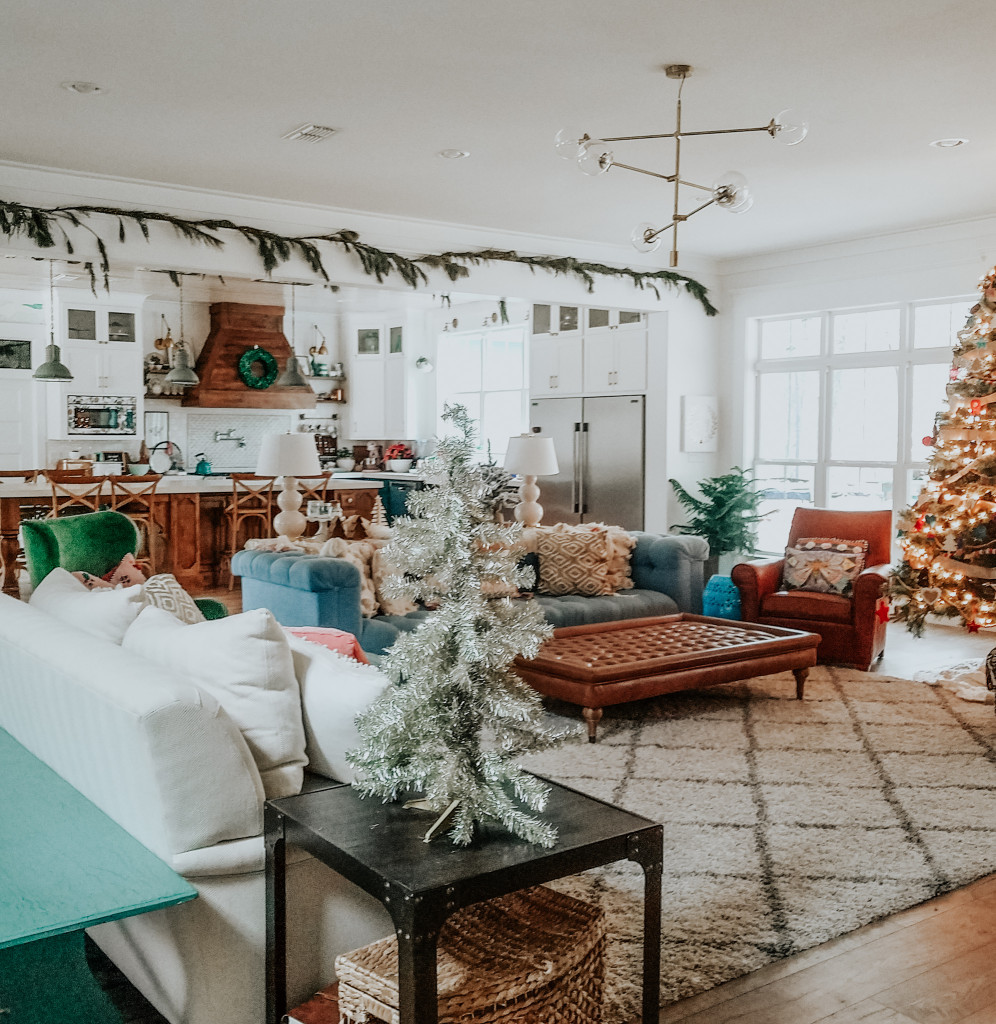 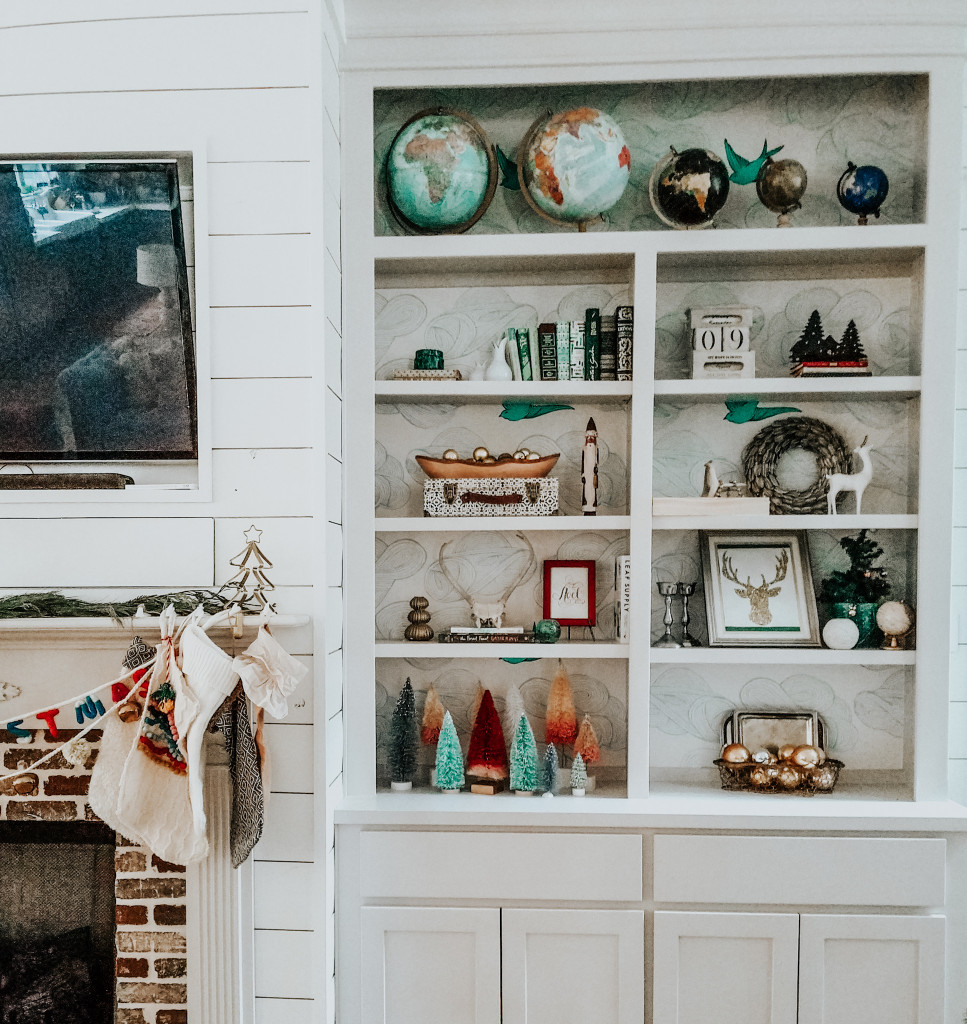 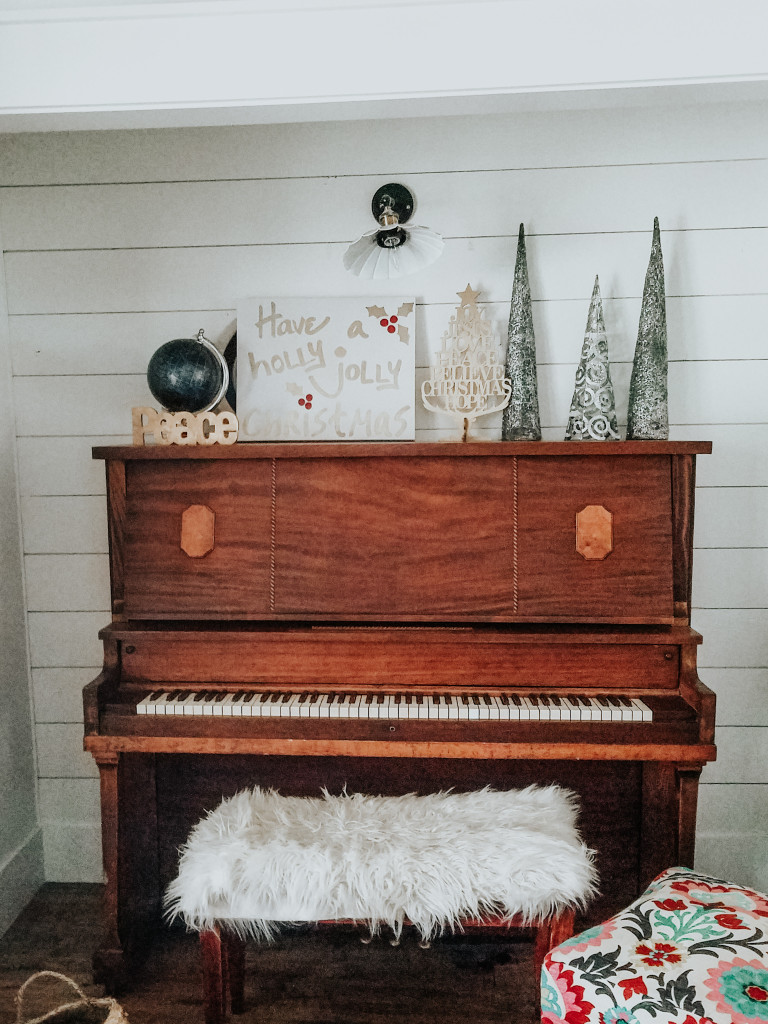 I like to call this the: I had way more sparkly trees than I realized and needed somewhere to put them all look. Also, the: that faux fur fabric has seen better days look. 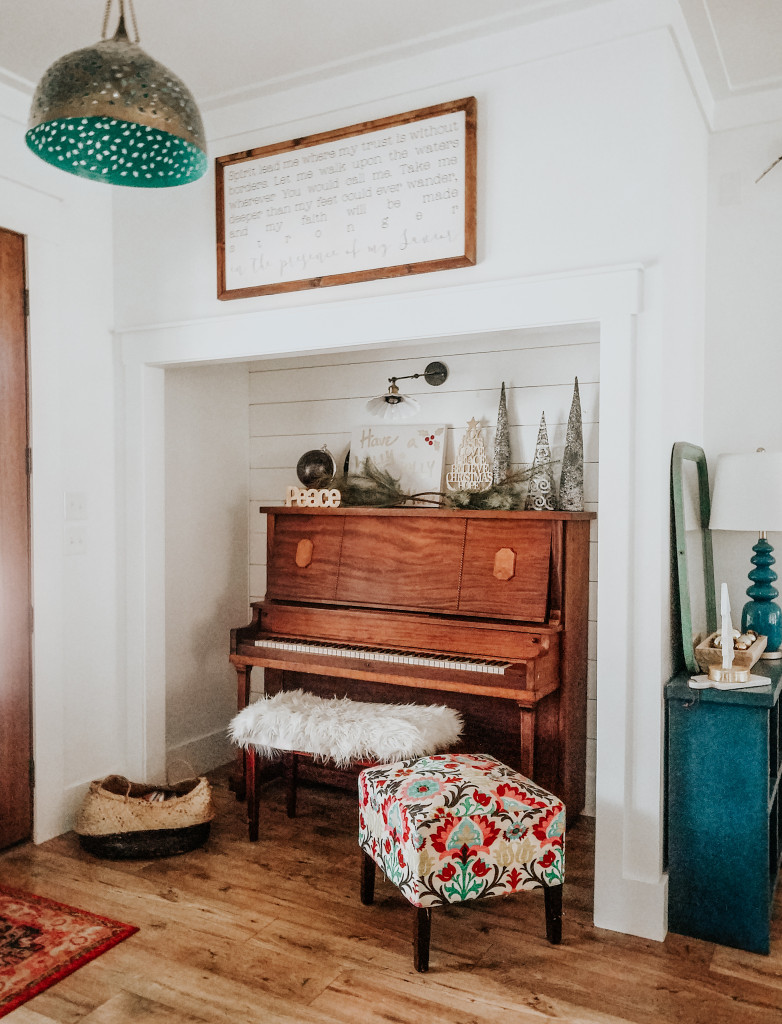 That basket on the floor holds all of our piano books, and it is usually overflowing with them. I’ll have you know that I leaned aaaalll the way down, and stuffed them all back in for you guys. You’re welcome. 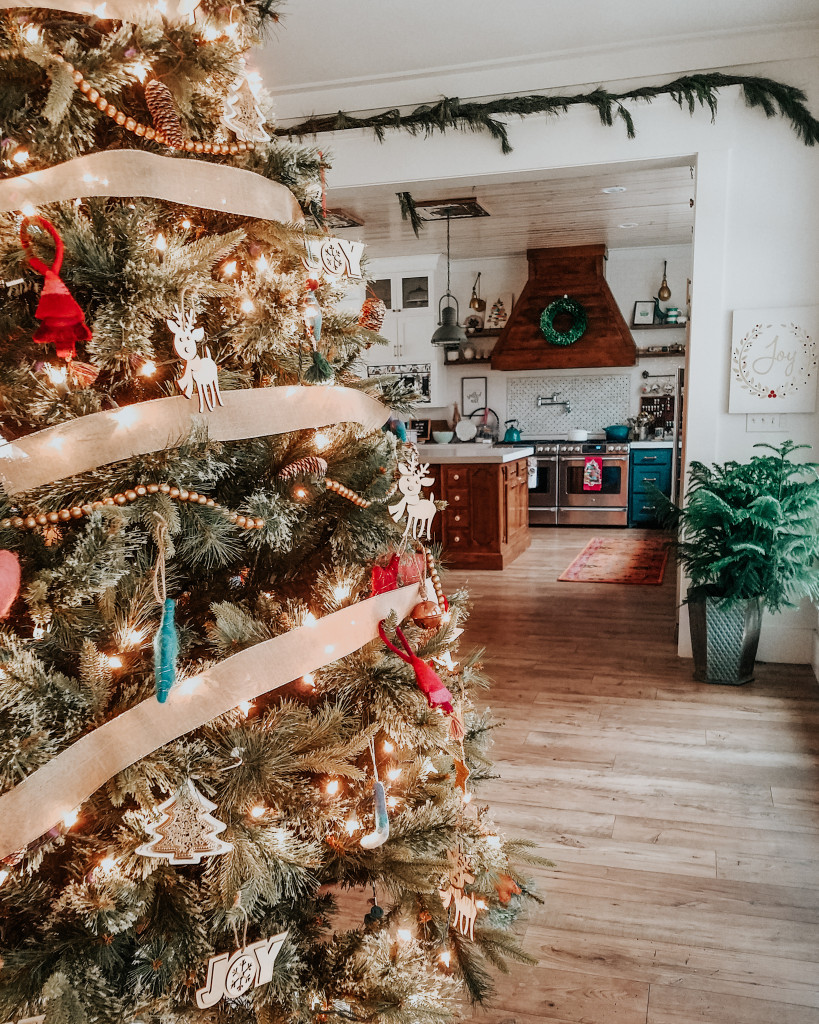 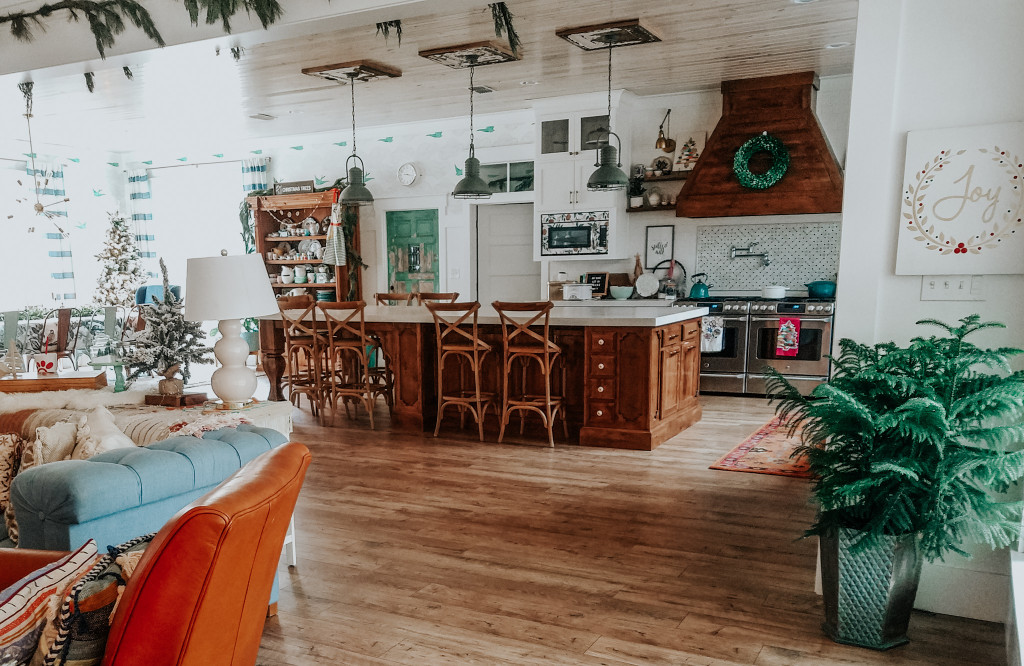 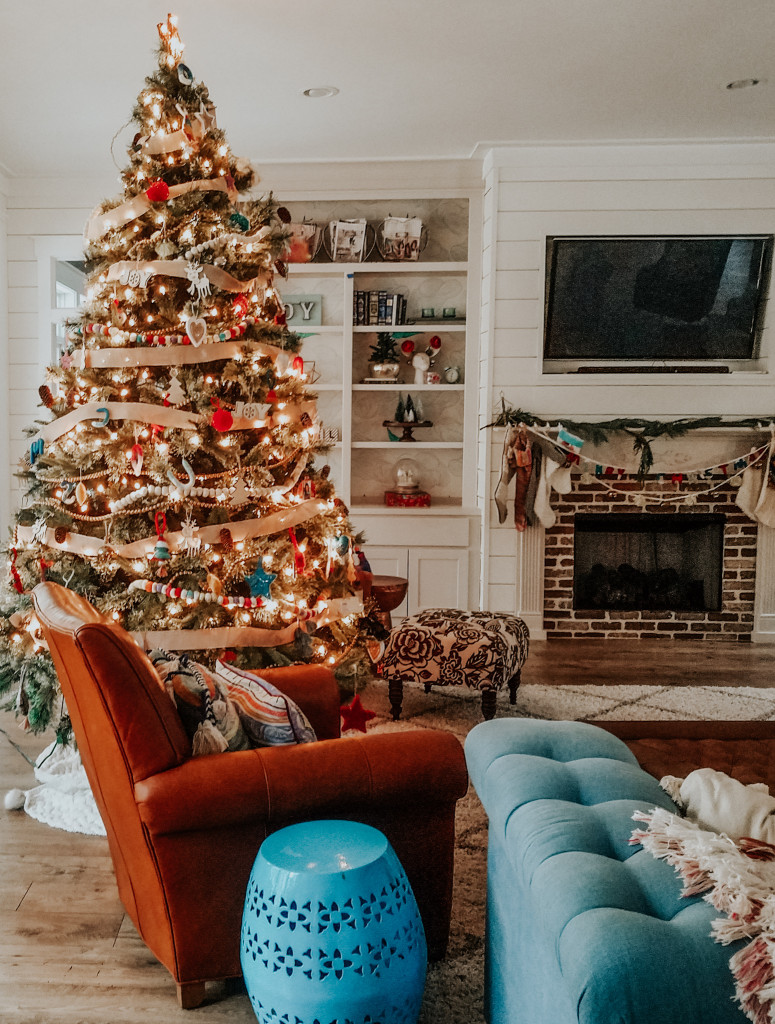 Are you tired of tree shots yet? 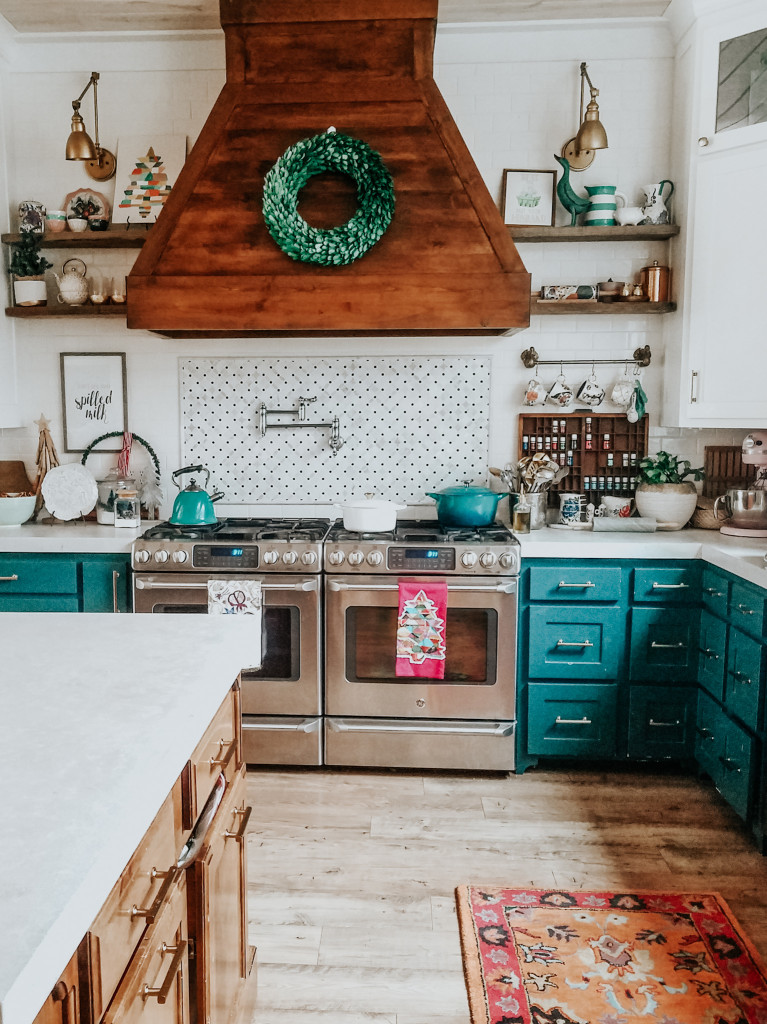 Clearly, I do not subscribe to the clutter-free counter-top philosophy. In fact, I think I just used Christmas as an excuse to shove even more detritus atop them. 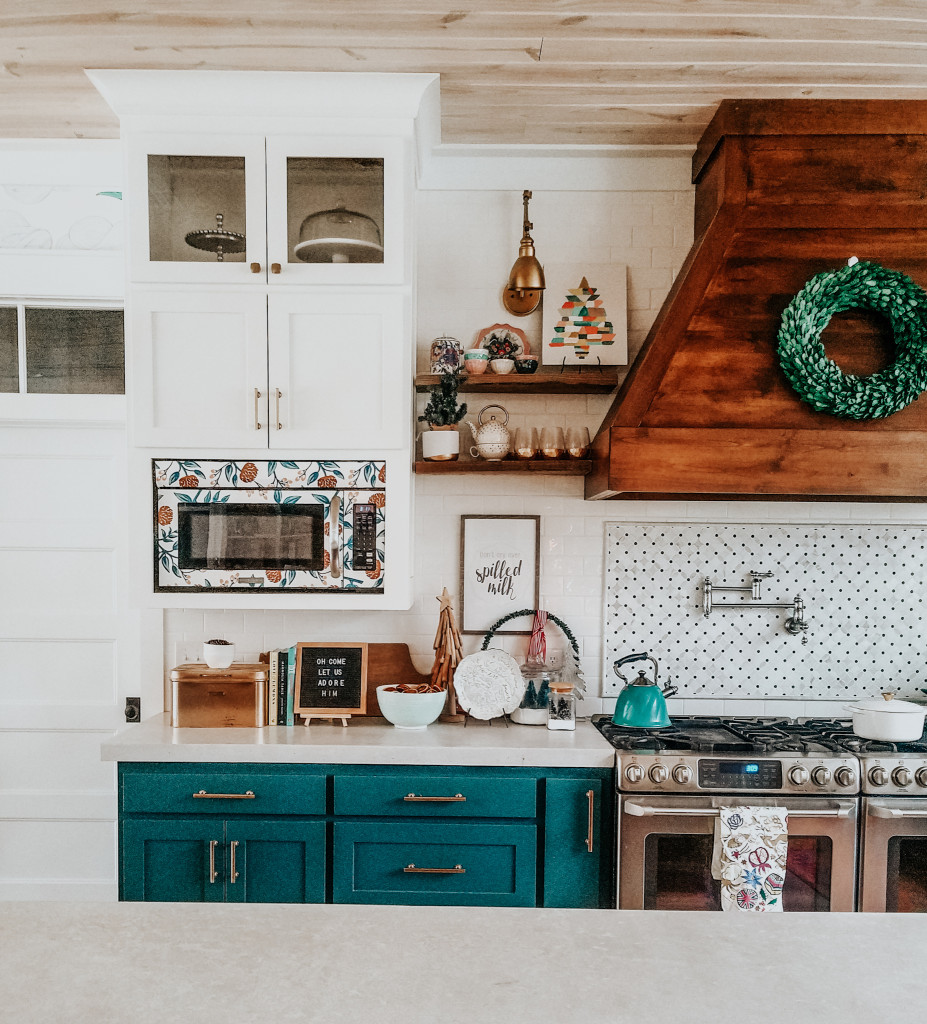 Speaking of counter-tops…a lot of people have asked how I like the concrete that we went with. The answer is: I love it! Wiiiiiittthhh some qualifiers. Despite Shaun’s having applied numerous thin coats of sealer as per manufacturing standards, it isn’t stain-free. In fact, the longer we have it, the more it stains. And I never have been able to figure out what the main culprits are. Strawberry juice? Not a problem. Mystery yellow substance that I never even saw the origin of? Refuses to come out. Oily things seem to cause the biggest problems.

And it’s not scratch-proof either. Even though we use chopping boards, there are still some little knife marks here and there, and there are some chips (thanks, in one particular instance, to a collision between a GIANT cast-iron pan and the counter edge, which never had a chance).

Still, I love that the island doesn’t have a seam and that it’s thick and sturdy and cool-to-the-touch. And I really REALLY love that, since we DIY-ed it, it was a mere fraction of the cost of any other option.

So. Yeah. I would do it again. 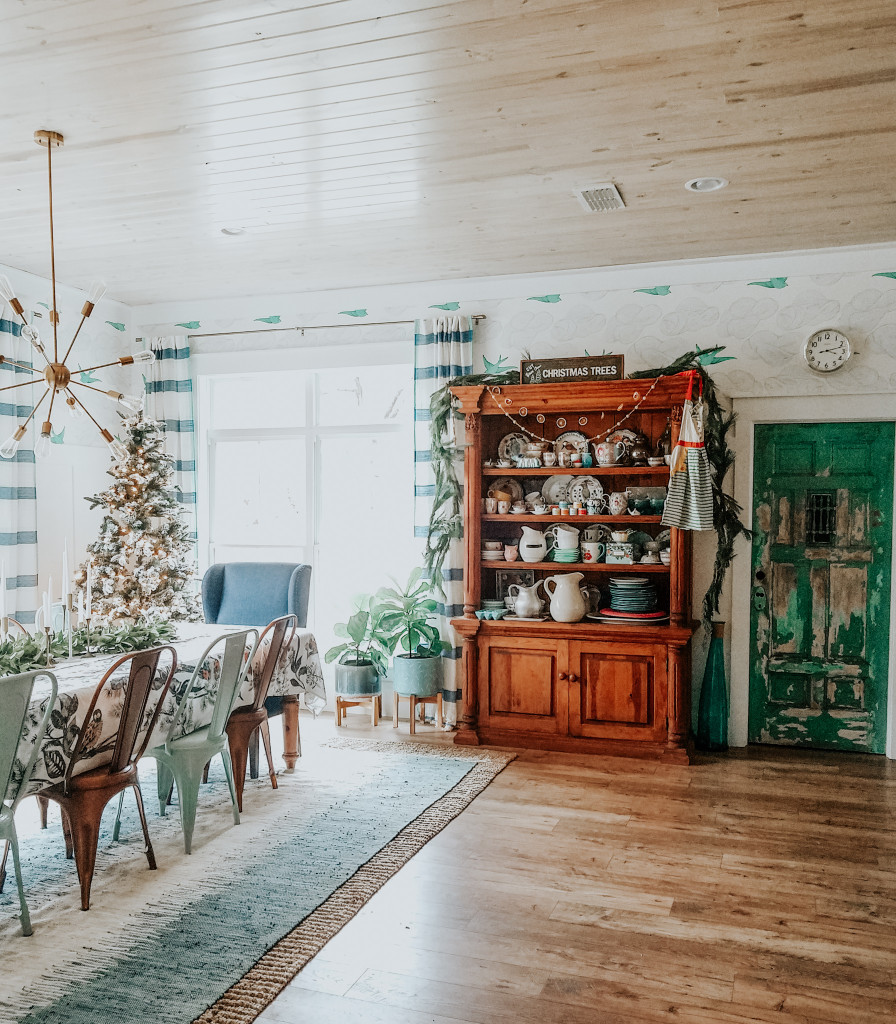 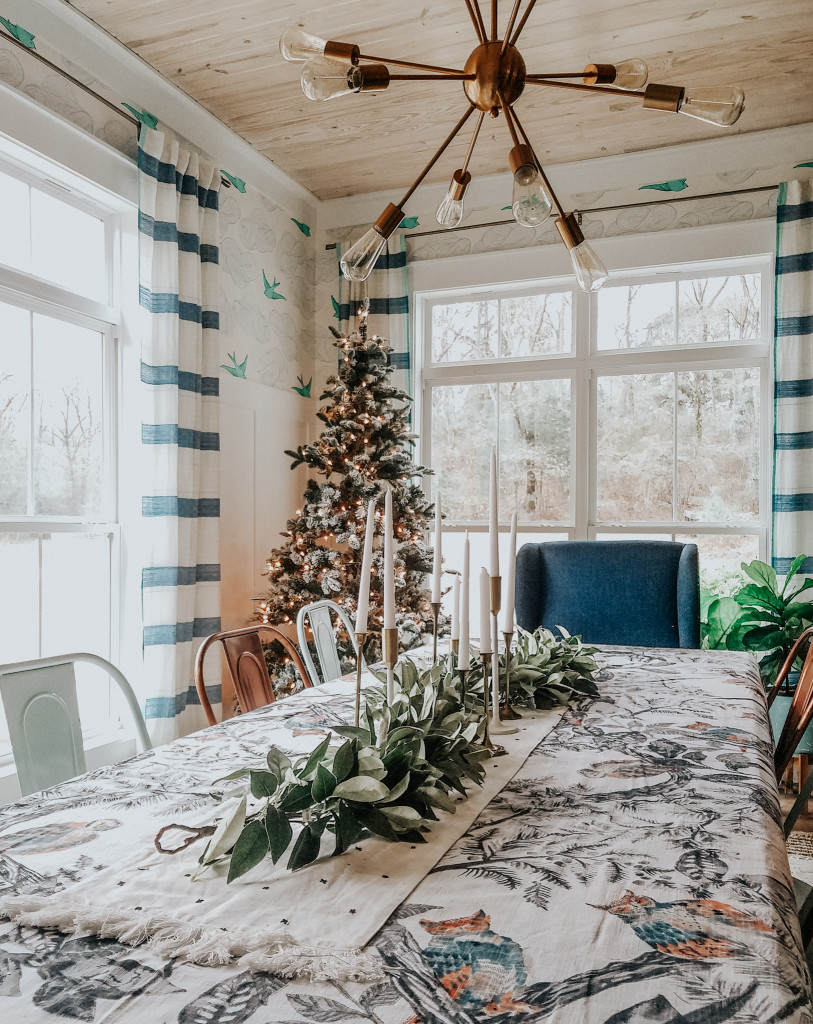 Oh! And before you ask (because someone will), I got those tablecloths for $10 (TEN!) from Anthropologie online. They were mislabeled as napkins, and I kept expecting the wrong thing to show up, but nope. $150 tablecloths (I know, ridiculous) appeared on my doorstep for 10 smackeroos. 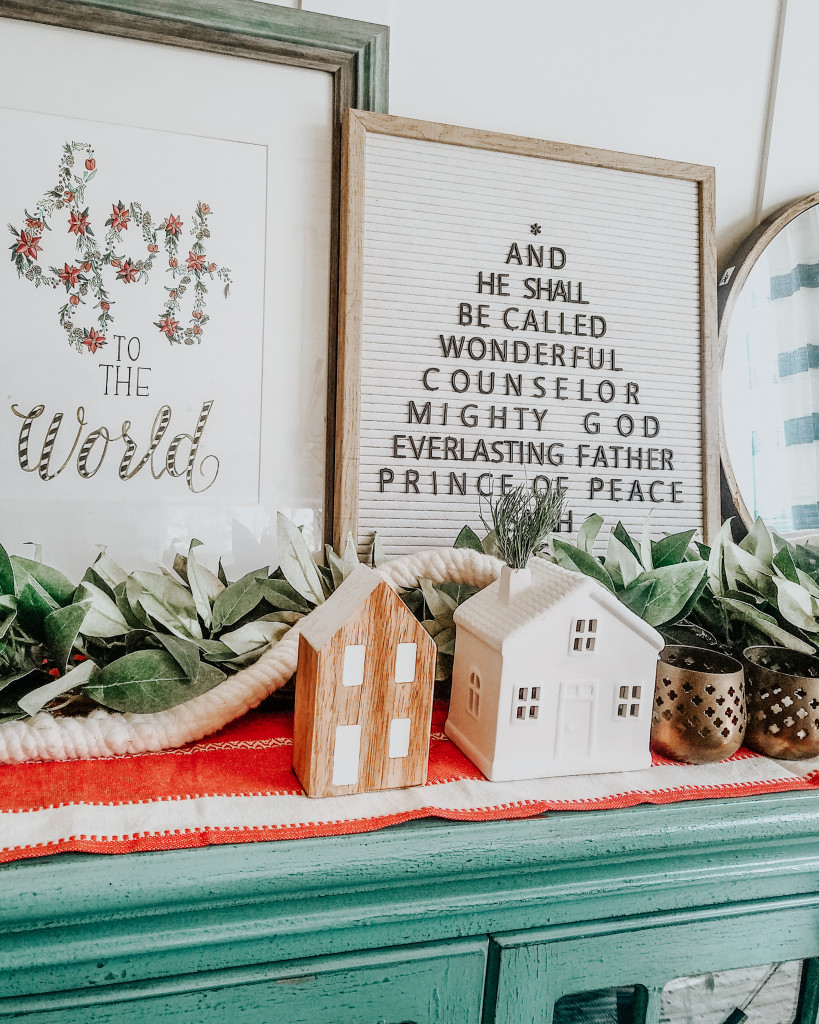 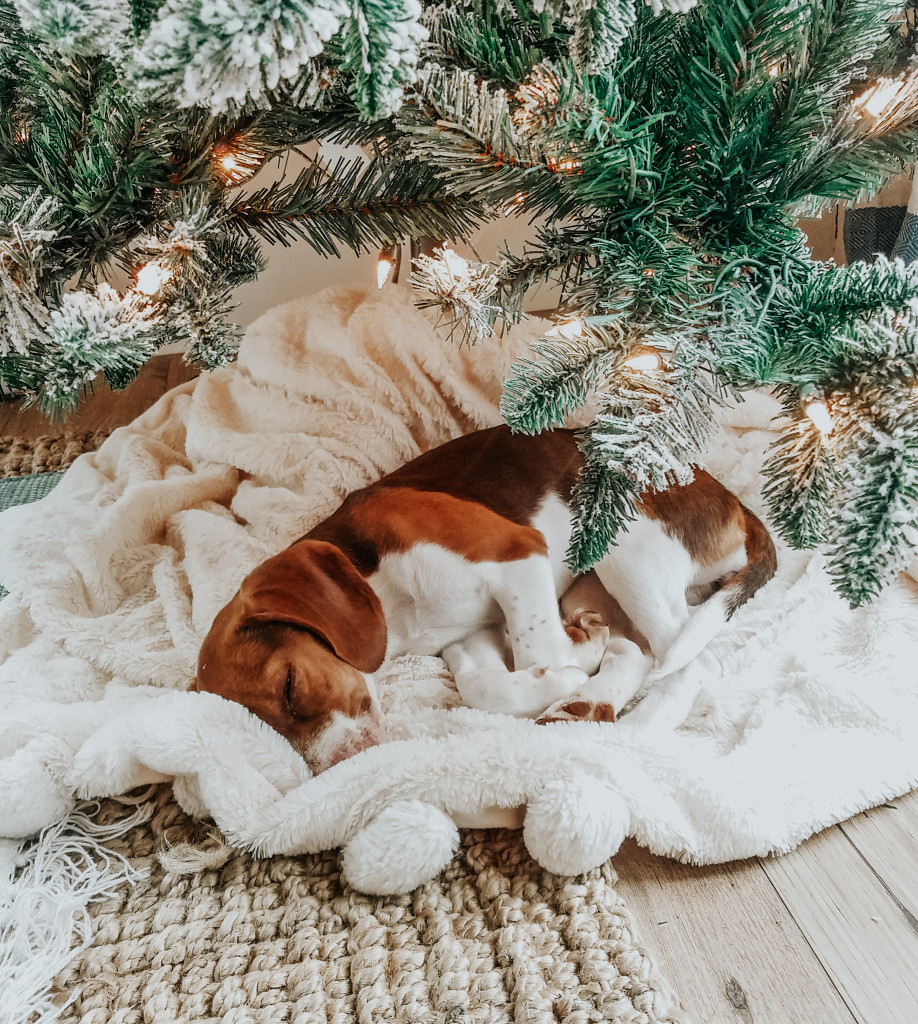 Ruby pretty much thought that I set this tree + cozy blanket situation up just for her. Not that I complained. She made a pretty cute pictures all snuggled up underneath. 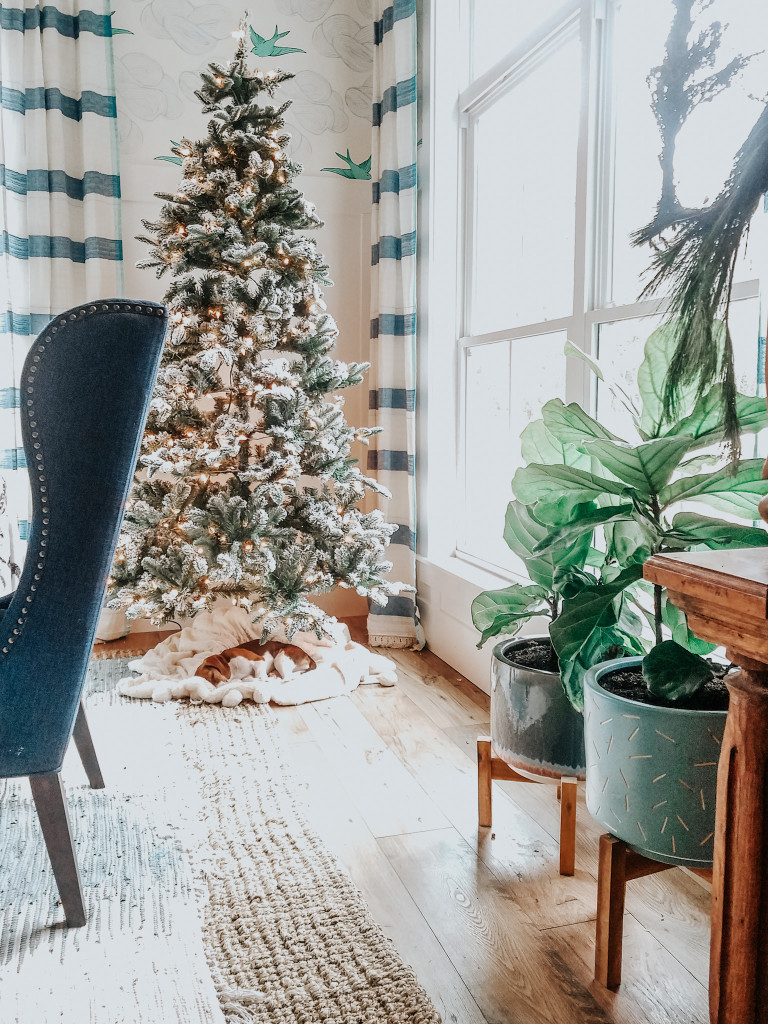 I just have to take a second to crow about my two fiddles there, NEITHER of which I have managed to kill and which are, in fact, thriving and producing new leaves on the regular (It’s been 9 months since I got them; this is a big deal). My secret? Water them with ice cubes once a week. Tada! I’m an instant plant lady, right? (Joanna would be so proud). 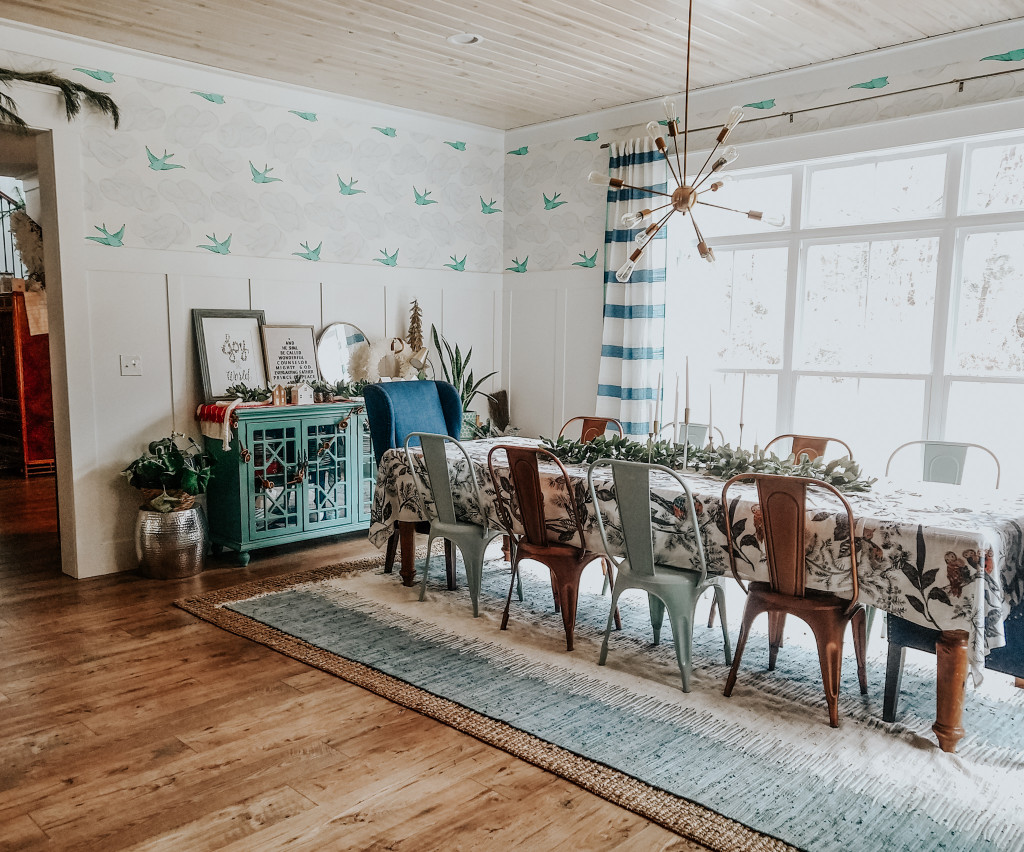 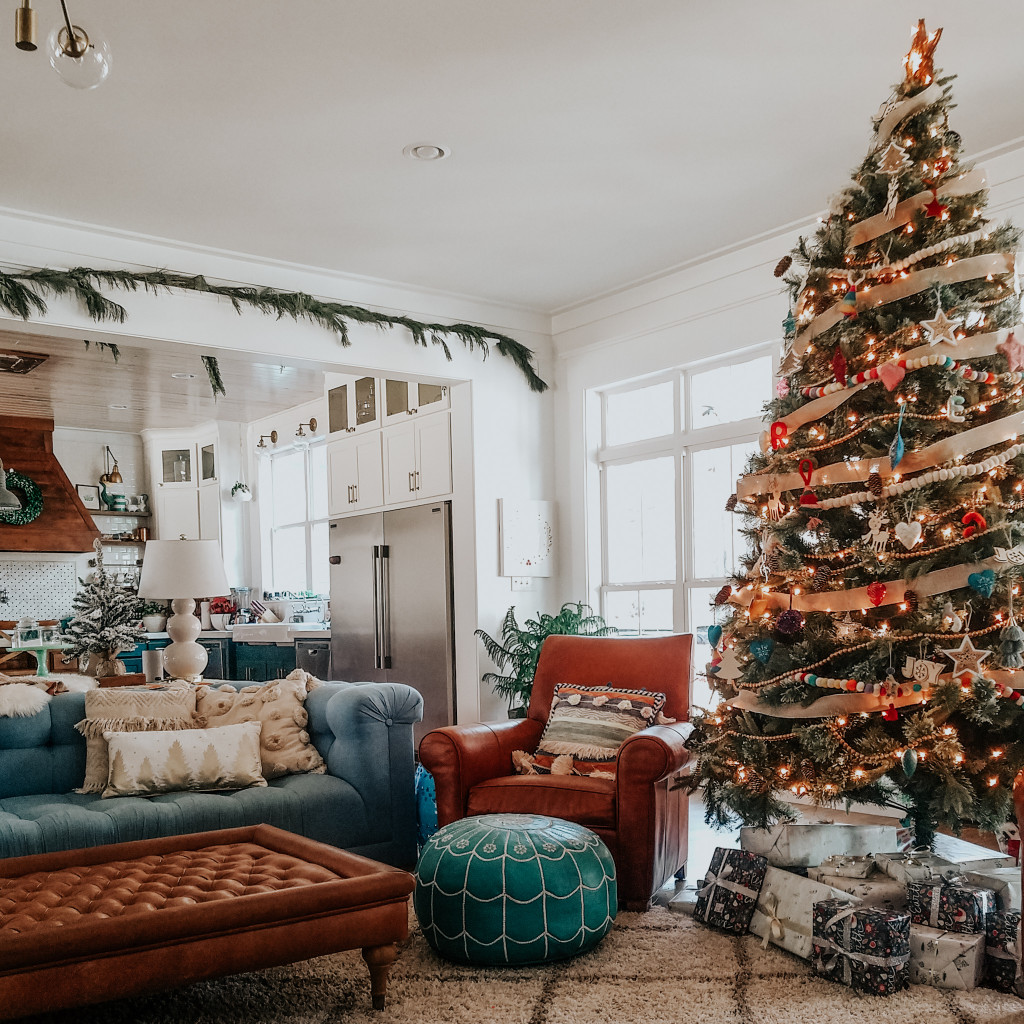 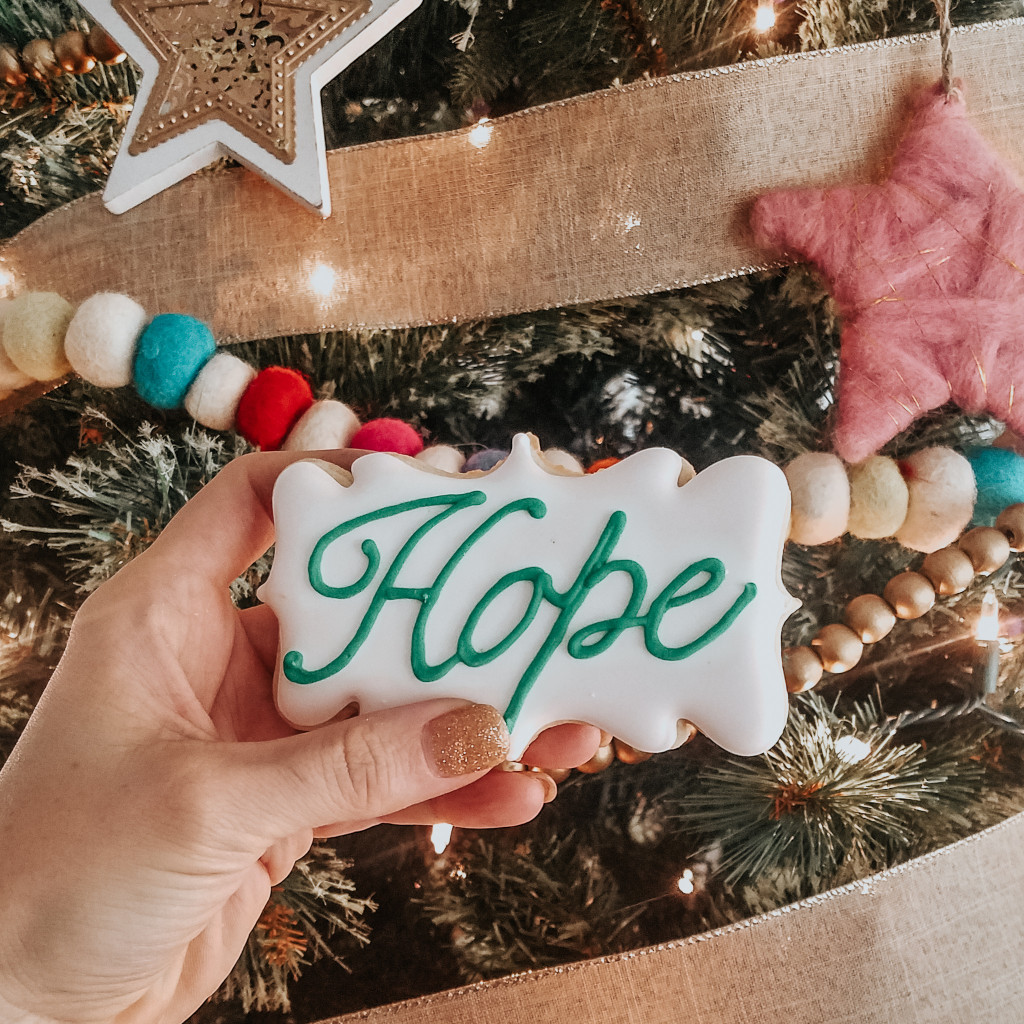 Hope is the word I am carrying into the new year with me. Not in a this-is-my-word-for-2019 kind of way. Just as a reminder in my heart that, regardless of some hard stuff we dealt with/are dealing with as the year closed/began or how I know that life is about to get just a tick crazier with a new baby thrown into the homeschooling/life mix, my hope is in Christ alone. He is able to use the hard and the crazy to shape and grow and work in me in ways that may not always be fun at that exact moment (although, new babies are fun, as far as I’m concerned) but will ultimately be for my good and for his glory.