Flicky Friday: Who doesn’t love curling up on the couch to watch a great flick after five rounds of the daily grind?  Nobody, that’s who. So! Each Friday, I’ll recommend (via a short blurb and also the option to read a full review) a movie for your viewing pleasure. But not just any movie. Because, see, I get a little picky about the movies I watch. My brain is cluttered enough as it is without extra junk rattling around in there. So the movies I’ll tout will be good (cinematically-speaking) and good (morally-speaking). That means no (or as little as possible) gratuitous cursing, sex, or violence. I’ll also do my best to recommend movies that are a little off-the-beaten path, so please don’t expect Twilight or Transformers to make the cut.

{Fun side note, courtesy of www.imdb.com: It Happened One Night is the first of only 3 movies to sweep the 5 major Academy award categories, including Best Picture.  But its female lead, Claudette Colbert, hated the film so much that she skipped the Oscars altogether and had to be found and rushed to the ceremony to make her acceptance speech in a traveling suit when she won Best Actress. Check out her expression below; I believe it}. 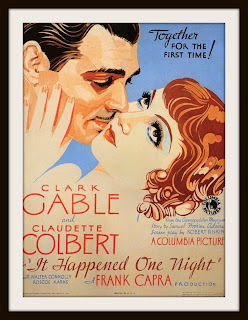 “And the moony-eyed pose again?! If only Clark knew that I spit in his drink.”

It Happened One Night is the story of an runaway heiress who teams up with a jaded reporter who is only interested in a killer story (or is he?) that will help him regain his job.  A romantic comedy in the truest sense, it strikes just the right balance between funny and lovey-dovey, thanks in no small part to its leads’ palpable love-hate chemistry.  The sharp-edged dialogue comes at you faster than a machine gun bullet, and the film rarely comes up for air, never allowing its audience time to contemplate its implausibilities.  Romance, zippy one-liners, and Clark Gable? Yes, please!!!

Can’t find it to rent? Click here to order it from Amazon, either as a hard copy or as an instant download.