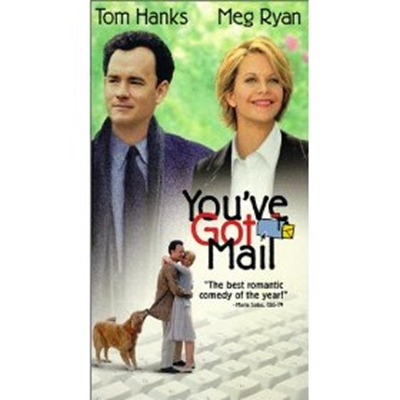 Fascinating tidbit, c/o www.imdb.com: The location of Fox Books in the movie is actually the location of a real-life Barnes & Noble, on Broadway and 83nd street on the upper west side. The Barnes and Noble generated considerable neighborhood opposition when it opened in the early 1990s, as many feared it would drive a local bookseller, Shakespeare & Co. on 81st street, out of business. This is exactly what happened.

You know that moment in You’ve Got Mail when the cranky cashier named Rose tells Miss “I have a dollar…that’s all…one dollar” Kathleen to, “GET. IN. ANOTHER. LINE?” (See, 75% of you already know what I’m talking about! 23% will have a sudden epiphany in about 25 seconds, and the other 2% are male. What up, fellas!).

Well, I sort of…kind of…had one of those moments last night at Walmart.  Except I was the one wanting to tell the people behind me to get in another line because I was the one holding things up.  So, not exactly the same.  But close enough.  You be the judge:

I’m sprinting through Wally-world hollering, “Out of my waaaaaaaay! Lady who needs to get home and feed her baby coming throooooooough!” (You never did that? Really?)…and I spot a wide-open checkout stand.  I whip my cart (Omigoodness, I almost called it a buggy. Where am I from? TEXAS?!) into line, Blue-Brothers-style, and dump the contents on the conveyer belt.

My checker is a sweet, nervous-looking young lady with a fetching flower in her hair, and everything’s going great until she rings up my grapes.  They price out at $1.50/lb., even though the big-as-my-car sign directly above them (that I can see from the line) clearly says that they are $0.98/lb.

I politely point out the discrepancy, and my adorable checker proceeds to hunt and peck for a good three straight minutes, printing receipt after receipt to assure herself that, each time she re-rings my grapes incorrectly, she has also taken the charge back off.

I suggest that she try the “comp price override” button, and she mutters, “Yeah, that’s what I’m trying to do.”  Now, I’ve never been a checker at Walmart before, but I have OFTEN been the person saying, “Brookshire’s has these on sale for _____,” so I’m familiar with the general vicinity of the price override button, and let me just say, she wasn’t even close.

The beads of sweat are forming, and the line behind me is growing.

But I have three large bags of grapes here, y’all, and on principle (or stinginess) alone, I am refusing to pay $7 extra because my sweet checker has never been taught the magic button—the first button, in my opinion, that any checker should know (okay, maybe “total” is kind of important too, but you get the point).

Everybody still here? Hello? Is this thing on??

Okay, for those of you still hanging on…here’s where it gets good.

Her trainer is running the line behind her, and, eventually noticing her distress, he tells his line, “Hang on a sec,” and comes running to help.

I am now holding up not one, but two, lines over three bags of grapes.

The trainer looks me in the eyes and says, “How much are these supposed to be?”

He smiles, nods, then proceeds to ring them up manually for…$1.50/lb.

The trainer looks me in the eyes and says, “How much are these supposed to be?”

I glance around and make sure Bill Murray and a groundhog aren’t standing behind me pointing and laughing.

Just a long line of people picturing themselves on the shooting range and me as the target.

He smiles, nods, then proceeds to do it correctly.

The trainer looks me in the eyes and says, “Two more? Okay, ma’am.!” Then he rings up one more bag of grapes and runs back to his line.

I’m not kidding when I tell you that the guy in line behind me and I both wailed in unison, “Nooooo! There’s one more!”

To no avail. He was gone.

Don’t worry, those of you who are getting annoyed at this point that I simply wouldn’t let it go. I did. I was going to pay the $1.50/lb for my last three pounds of grapes.

But then a miracle happened.

My sweet, nervous cashier who had obviously never completed the comp ad override maneuver successfully in her life, screwed her eyes shut, jabbed her finger at the keypad a few times, and—lo and behold—the price changed from $1.50 to $0.98.

I wish that I could tell you that my checker’s name was Rose so I could tie all of this neatly back together, but I honestly was too frazzled to remember her name.  She was way nicer than Rose anyway.

I did want you to know, though, that your weekend movie recommendation was brought to you courtesy of the great grape gaffe of 2011.