Okay, so in case you haven’t noticed, this has been the week of the guest post around here at 5D5W. Not that I’m complaining, mind you!

This afternoon, I’ll be guest-posting at Allison’s: 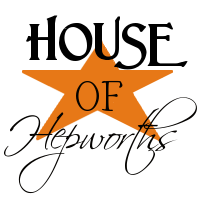 Allison’s site is awesome for quite a few reasons, not the least of which is that she likes creating thrifty DIY projects like I (and so many of the rest of you) do. Throw in the fact that she hosts one heckuva link-up party (crafts, projects, food…you name it) every Thursday AND she’s a seriously funny lady, and you’ve got one fantastic blog. I am so honored to get to introduce myself to her readers. Hop on over and check out my post, but make sure you stay a while and have a look around. Lots of eye-candy, great ideas, AND a huge Dremel Multimax giveaway in progress (which reminds me…I haven’t entered yet!).

In other exciting news, Roeshel of The DIY Show-off is featuring a few of my projects after already making a big deal of my closet makeover a few weeks back. I am seriously feeling the love today! Stop by and check out the awesome DIY projects that she creates and highlights on her helpful blog! (She also hosts quite the link-up on Mondays in case you’ve got something you’d like to show off!)

And now for that little reveal I promised yesterday when I also unveiled the results of the Thrifted or Grifted poll (if you haven’t seen it yet, you might be surprised).

Today, I’m showing you the first thing you would encounter if you came over to my house for a visit. Since most of you can’t actually do that, just imagine knocking on my front door and my opening it to greet you with a smile, releasing the mouth-watering aroma of fresh-baked banana bread as I do so.

Now, imagine my looking a bit frazzled and holding a pair of mismatched socks, the rest of which are strewn about the living room floor, and you’ll be much closer to reality. I am making banana bread tomorrow morning, but only because I let the bananas get too mushy and will have to chunk them otherwise (please, please, please never assume that, because the pictures I am showing you are pretty/neat, that the rest of my house/life looks anything like that because, 95% of the time, it doesn’t).

And before I get the urge to hop off on another tangent, let me show you some pictures of my entryway (nothing like visual aids to keep me focused); 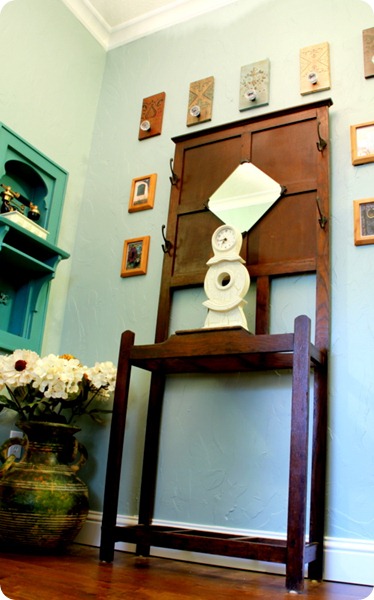 The wall color is Sherwin Williams Quietude (which I used the leftovers of to paint my French doors). I bought the hall tree at the local barn sale I also mentioned here and here (I find the best stuff there!) for less than $100. 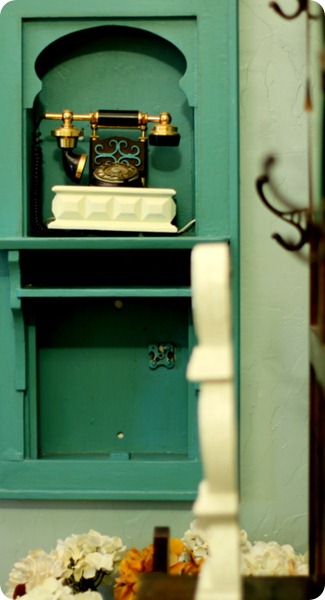 The vintage phone booth was bought from another local spot (I think I talked him down to $15), and I used a sample-sized can of that pretty turquoise (whose name I do not remember) to spruce it up (definitely one of those don’t-look-too-closely pieces which took a boatload of paint-scraping to make look half-way decent…I was just a sucker for the lines). That phone you see there was a $7 Goodwill find and would be so much more practical if it were actually hooked up (we were assured it worked). 18 months isn’t a long time to have something just sitting around uselessly, is it? (Please say no). I painted the cream-colored section and used the last few dabs of the same turquoise that is on the phone booth to highlight the scroll-detail. 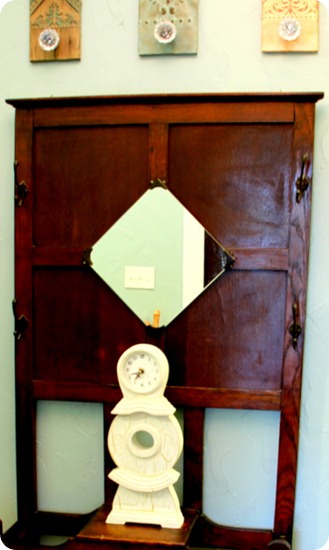 I bought the tin doorknob hangers as a set from JcPenney on a major sale (Maybe $30 for all 5) after stalking them for a while online. The clock is a church garage sale find (complete with the original tags from World Market) for $2. 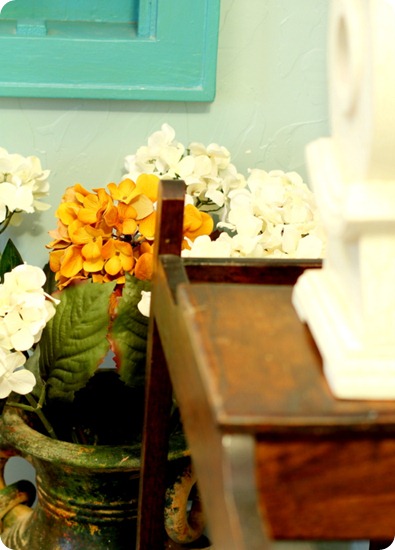 The big urn was a $10 purchase from a curio shop in my hometown, and the hydrangeas were 90% off at Michael’s. 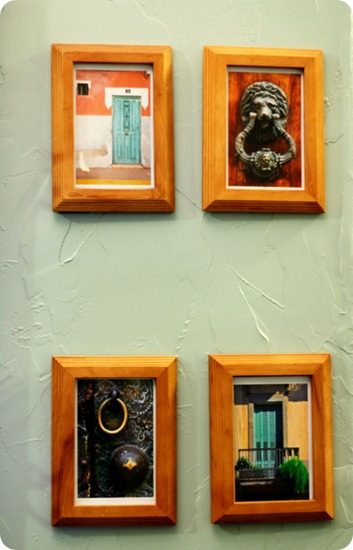 I would love to say that I took all of those pictures and that they mean something specific to me, but the truth is that I bought them from a stand at an open-air market in Sydney, Australia (someday I’ll post about it), and, although the lady who ran the stand did take them in various locations throughout Australia, I have no idea about any specifics or significance. They are special to me, though, because they remind me of the mind-blowingly amazing trip that my husband and I got to take (while our respective parents took turns watching our two boys…Della wasn’t in the picture yet) over New Year’s 2010. 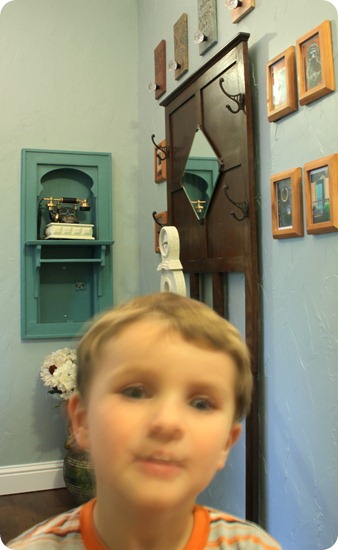 The boys were taking turns “helping” me press the button for the pictures. Of course, then Simon decided the shot would look so much better with him in it and popped up out of nowhere for a cameo. Hey there, Doodle-bug. 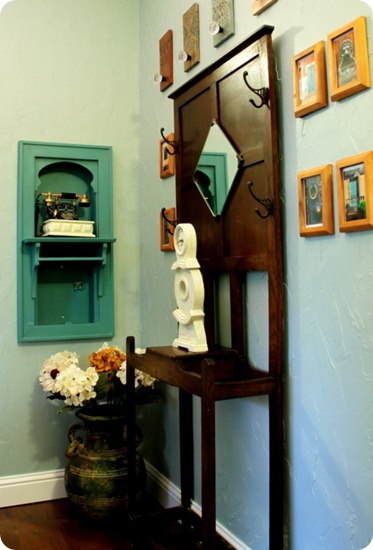 He’s pretty cute, but I figured I’d leave you with one last uninterrupted entryway shot. Hope you enjoyed this little come-on-in tour, and I wish that I really could have you all over for banana bread tomorrow because a) I like you and b) we’ve got lots of mushy bananas around these parts!

As I mentioned yesterday, I will be spending my weekend exercising my fanny off with my fellow Les Mills-junkie instructors. 2 whole days of nothing but sweat and adrenaline. I know that sounds like medieval torture to some of you, but I’m crazy excited.

If you think of it, though, would you say a prayer for this little girl? 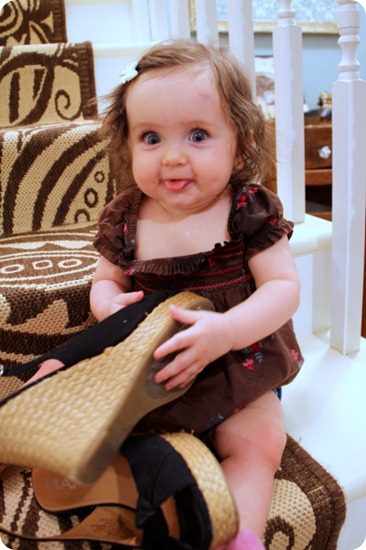 Notice the maniacal, “I’m on the stairs, and I have Mama’s shoes” gleam in her eyes.

She’s never been away from me for more than 6 hours, and she’s a ridiculously huge Mama’s girl. This could be tough on her and her sweet daddy (oh, okay, and me too). I’m kind of nervous.

I’ll be back for Move-it Monday with loads of fun (sweaty) pictures to show you. Just be glad there’s no such thing as scratch-and-sniff blogs.

P.S. If you haven’t already, get yourself on over to that cute little giveaway button on the sidebar, and win yourself $25 to The Pleated Poppy!