Hey there, folks! And welcome to Round Two of our new linky party:

This week’s theme is Fall Fun, and I would love it if you would link up (or leave comments about) whatever 5 Fall Fun things you’ve been enjoying lately.  If you’d rather just link up 5 pieces of randomness or a different theme, I’m totally fine with that as well, though.

All that I ask is that you link to your specific 5 Things post rather than your blog’s homepage and that you put the Five Things Thursday button (left sidebar) somewhere on your page or post so that others can join in the fun.

So, what’s got me loving fall so far? Weeeellll, here in E. Texas, things usually feel about as crisp and cool as a lukewarm bath, which means I had to get a bit creative with my list, but I managed to find some fun fall-ish things to share: 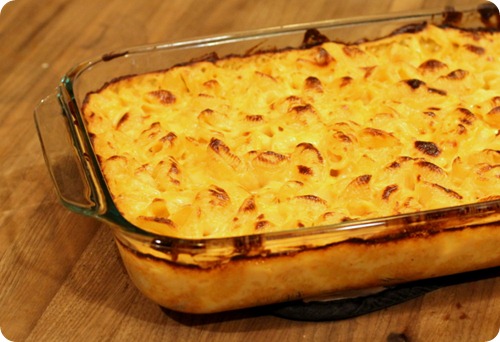 Honestly, it’s not usually a whole lot cooler at night than it is during the day (and with highs in the 90’s some days, that’s to say, not very cool at all), but every now and then it dips down into the 60’s, and on one such frigid night, I busted out some warm, cheesy goodness to celebrate. Stomach. grumbling. must. resist. urge. to. lick. screen. 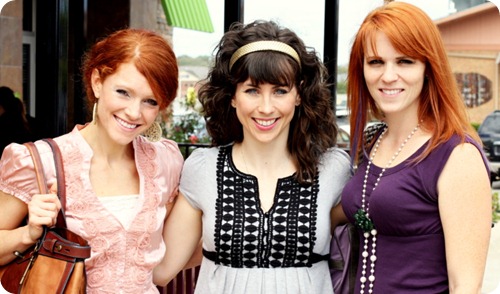 Yes, I know, another birthday reference, but I looooove birthdays (or can’t you tell?), and mine is in the fall (as are my two youngest munchkins’) so this time of year definitely has some fun stuff going on in the birthday department! 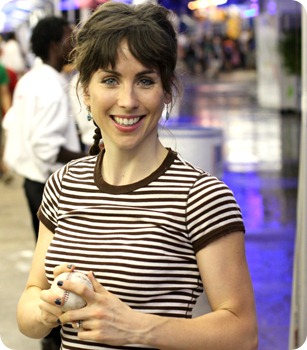 Okay, so the truth is that I don’t watch much (read: any) baseball because I don’t watch TV. And I doubt that will change unless the Rangers make it to the World Series again, but I played softball avidly all the way through high school and a little beyond and tagged along to all of my brother’s tournaments growing up, so baseball has a quintessentially fall-esque vibe that I love even if I don’t follow it like I used to.

Speaking of a nostalgic throwback (har har), I had the opportunity to throw a ball for the first time in forever at the State Fair last weekend where I paid a ridiculous amount of money to chunk that ball you see there twice: once to determine my speed—at which point I guessed what speed I would throw it the next time—and then a second time to see if I got it right.

I nailed it! (37 mph the first time…guessed I would throw 40…and threw 40!). Just in case you’re wondering, the female speed record for 18 and up was 57 mph, so I was feeling pretty puny by comparison.

What did I get for my efforts? 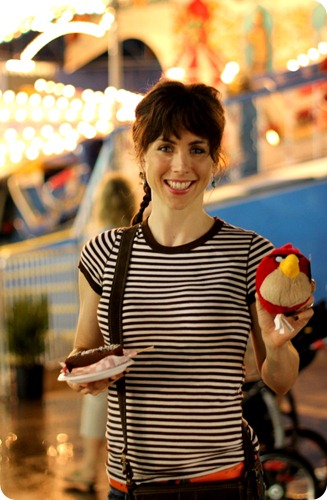 P.S. I’m getting off topic here, but I just wanted to butt into my own post (is it still interrupting if you’re technically only interrupting yourself, but other people are reading the interruption? Ooooh, deep) and point out that my awesome husband took on one of the other booths and managed to detach a two-inch paper star from its surrounding background using only a (likely rigged) State Fair BB gun.  The booth attendant totally wasn’t paying any attention because he clearly didn’t expect him to do it until he turned around and saw what Shaun had done and was like, “Dude! Wow, that’s really good!” Of course, then he turned it over and discovered that the star was hanging by 1/2 of a tiny little brad (Shaun hadn’t seen it since it had fallen behind and looked like it had come off completely)—seriously we’re talking a fraction of a millimeter—and the guy wouldn’t give it to him.  Makes sense, though, because the prize for that feat was a bicycle.  Let’s see…tiny angry bird or bicycle…which do think is supposed to be harder to get? 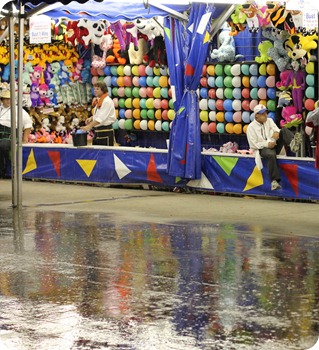 You’ve probably heard all about the drought in the South, and Texas has been especially hard hit, with wildfires (including some lost lives) and trees dying by the droves…really sad.  It was such a welcome relief when, just as we were about to leave the Fair, the sky opened up and dumped big fat drops of blessed rain on the fairgrounds.  I am convinced that God was responding to my three-year-old’s daily prayer of, “Lord, pwease wet it wain.”

We waited it out for a little while and then decided we didn’t care and ran for it—the entire 1/2 mile back to our car. We were both drenched by the time we got there…and smiling like fools. It was marvelous! Fall fun, indeed! 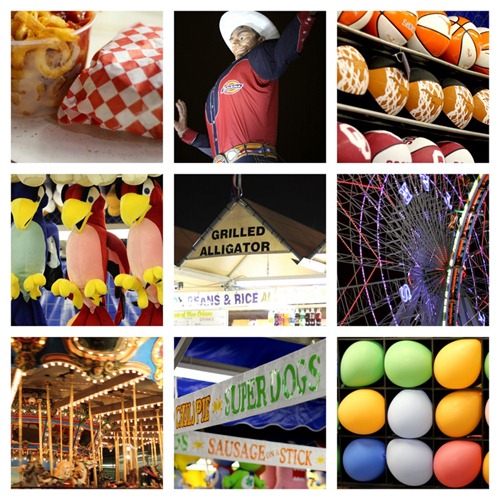 Okay, I know that I’ve already mentioned it twice, but I just had to include a collage (wanna see how I make these?) of the fun we had (no, we didn’t actually eat grilled alligator…I’m too chicken, which, coincidentally is the main meat I eat) at the State Fair in Dallas last weekend. We ate lots of yummy food (although the only deep-fried item we consumed was a funnel cake), held hands, rode the Ferris wheel, people-watched, tried our hands at several of the game booths (you’ve already witnessed the height of our success…tiny angry bird, indeed!), and just generally had a grand ol’ time. 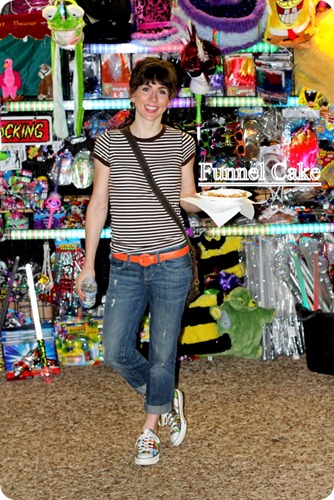 Oops! There I go trying to lick the screen again!