First of all, let me take a moment to say thank you, Thank You (THANK YOU!!!) for your overwhelmingly kind response to my trich post from last week. I’ve got some catching up to do on comments and emails, but my goal is to answer them all.

(Also, thank you for not commenting on the fact that, in spite of the 5 Things Thursday header, there was no other reference to “5 Things.” I had a tie-in all worked out, but I got to agonizing over my wording in the wee hours of the morning and completely forgot to include it).

It had to have been a little strange to read something so personal (and, let’s face it, more than a little odd) about someone you don’t know in “real life,” but you were all things encouraging, understanding, and supportive, and I am grateful beyond what words can express.

I still haven’t pulled since the post (which, as unimpressive as that sounds, since it was 4 days ago, is pretty remarkable for a girl who hadn’t gone 4 hours without pulling—much less 4 more days, which adds up to almost 4 weeks total—not that long ago), nor did I go on a pulling spree while I wrote it, which, considering that writing/stress are both trich triggers for me and that writing that post stressed me out…is a small miracle.

Praise God for small miracles, since they add up to huge ones!

For those of you who told me that you struggle with the same or similar demons, I meant it when I said I will pray for you.

I’m going back through my comments and writing each of your names down in my prayer journal, and then I will pray for strength, peace, calmness, self-control, and a desire to quit…for you and for me.

Email me if you want me to add you to the list!

I’m also noodling around another idea—something to help keep anyone accountable who wants to be, including me—and I’ll share more when I get that figured out.

But again, what I really want to say is, “Thank you!”

I am so humbled that you would take the time out of your day to let me know that I’m not alone in a struggle.

So! From the heavy stuff to the heavy lifting (not really, but it sounded like a good fitness transition, right?), how’s about we get it our fitness on vlog-style today?

I actually filmed this one for you last week while we were on our mini-vacation to Oklahoma for the hub’s birthday.

But I managed to commit a cardinal blogging sin and booked a cabin that had no internet access (despite my absolute confidence that it did; that’s what happens when you look at the same listings on VRBO over and over again…they start to run together).

It turned out to be a blessing in disguise since it forced me to take a break from blogging and all other forms of social media.

But it made posting that video a total bear.

But after buying a power cord at Walmart (of course I left mine at home even though I chanted: “Don’t forget power cord,” ad nauseum in my brain as we packed), heading to McDonald’s to hijack their free WIFI and discovering that the location of their only electrical outlet would have forced me to set up shop in one of the high chairs from the stack right in front of the drink dispenser (no thanks), then heading to a Mexican restaurant where I consumed the worst bacon, egg, cheese biscuit I’ve ever had the misfortune to encounter so that I wouldn’t feel guilty for hijacking their free WIFI, only to discover that, no matter what network key my waitress gave me, nothing worked (although…when she saw me planking in the video, she said, “Is that you?” I nodded, and she said, “Oh NO, you didn’t!” I said, “It’s for a blog,” and she demanded to know the name. I’m pretty sure I have a loyal reader for life : ))…

After all of that + a trip to a coffee house where You Tube would not load no matter what I tried, and the uploading process to Facebook imploded 3 times in a row (after I waited 10 minutes each for it to load while attempting to simultaneously entertain/distract/bribe a 14-month-old with chocolate-covered pretzels and keep her from smearing her slimy brown fingers all over the chenille sofas…

After all of that…I gave up.

Goodness knows it pains me to admit it, but it was definitely boonies Oklahoma internet: 1, Abbie: 0 that day. (We may have to return to that cabin someday just so I can have a rematch!).

Not sure why I just shared all that (except, perhaps, to further convince you of my delicate mental state).

And I’m sure as peaches not erasing it now.

After the world’s longest, most rambling and unnecessary introduction, here is our Move-it Monday fitness vlog.

At least as much as it’s possible to enjoy being told to make your abs burn like my mama’s kitchen towels.

(Oh, and SO sorry for the crazy red text. I couldn’t read the white when I was typing it up, but now that it’s posted, I can’t read the red. Maybe I should just give up on vlogging altogether. I’m clearly not predisposed to success in this area).

Untitled from Abbie Halberstadt on Vimeo.

Oh, and here are your challenges for this week:

BEGINNER: Hold a plank on your elbows and knees for 30 seconds. Rest (10 seconds). Repeat two more times. (NO booties in the aaai-yer).

INTERMEDIATE: Hold a plank on your elbows and toes for 30 seconds. Rest (5 seconds). Repeat, adding the forward and back rocking movements (slow) if you’re able. Rest (10 seconds) Repeat 1 more time either on your toes or on your knees.

ADVANCED: 4 sets of 30 second plank holds, using the rocking forward/back and the leg-lift options on 2 of the sets if you can. (5 second rests in between).

BEYOND ADVANCED (AKA: mildly deranged): Hold a plank position for as long as absolutely possible until your abs feel like they will burst into flames if you don’t relax. (Try not to send me hate mail if you choose this option, please. You will be sore).

P.S. I know I teased you about polka dots and washing machines on Friday, and I promise…all will be revealed tomorrow!

P.P.S. I’m doing an absolutely DEPLORABLE job of reminding you, but I’m saying it now: if you haven’t entered yet to win the adorable Little Larue tote from Shop Ruby Jean, I don’t know what you’re still doing here! Go enter! You have until Wednesday @ midnight! 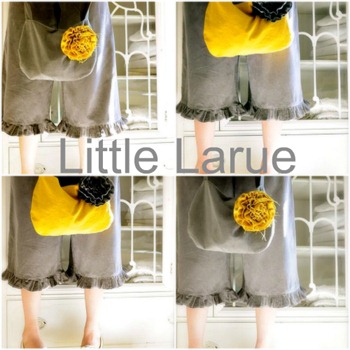