So, as any of you who have been pregnant know, there is little less motivating than going clothes shopping during the waning days of one’s gestational period.

Which is a fancy way of saying, why in the world would I want to try anything on when what I really feel most appropriate doing is mooing or maybe making that “backing up” beeping noise just to warn people to clear the path as I come through??

Okay, so maybe hormones start to affect your judgment a bit (you should probably save the mooing at least until after your milk comes in).

But the concept is sound.

As I mentioned in this post, from way back when I was still pregnant a whopping two weeks ago (was it really that recent?), waddling around with a gargantuan belly is a great way to keep from spending money.

You don’t even get terribly tempted by cute, clearance maternity clothes—mostly because you have a grudge against all things maternity by that point and “planning ahead for next time” just feels like adding insult to very serious injury (no joke, I’m not sure my left foot will ever be the same after Della finished walking all over it in its uber-swollen state; it sure did seem like it was on purpose by the end).

The best part of all is that there is nothing quite so thrilling as buying clothes AFTER you’re not pregnant anymore.

Suddenly, the sartorial world is new again, and, even if you don’t have your figure back yet, the motivation to give a rip has returned!

At least, that’s how I usually feel…and why I’m wearing an almost entirely new outfit for Wardrobe Wednesday this week—my first since having the twins. 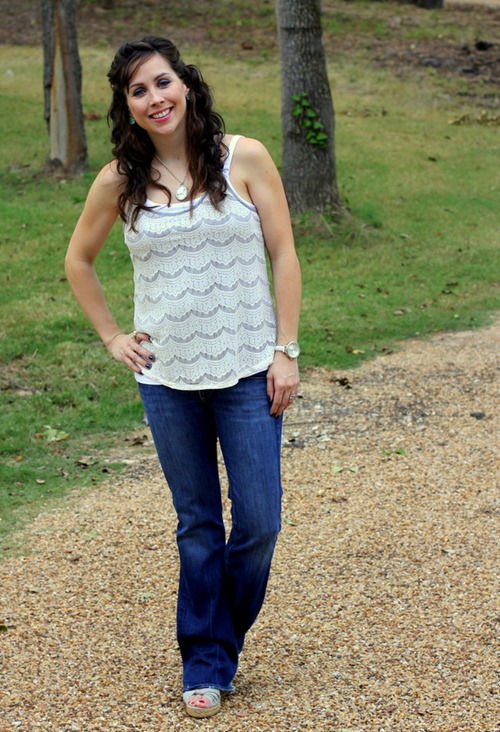 In fact, the only significant thing of note that is not new are those Paige jeans that I bought from a friend a while back.

Everything else is brand-SPANKIN’ new, including this adorable Lisa Leonard My Dear necklace… 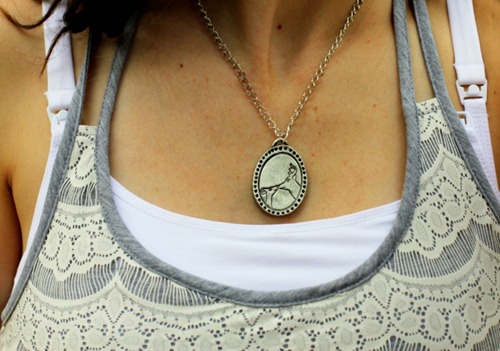 Which I got on sale with an extra 20% off code on top of that on Labor Day (I figured I was buying myself a “push present;” turned out to be a bit premature).

And these fantastic neutral wedges (with just a hint of sparkle that you can’t see in the pics) that my mom got me as a baby gift (her philosophy seems to be: if babies need cute clothes, so do their mamas, and I’m thinking I wholeheartedly agree!). 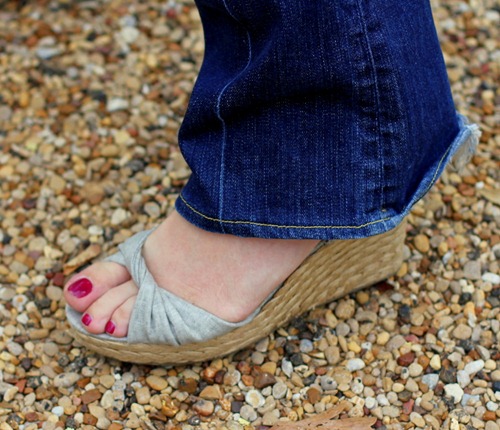 And my fun/uber-comfy lacy top… 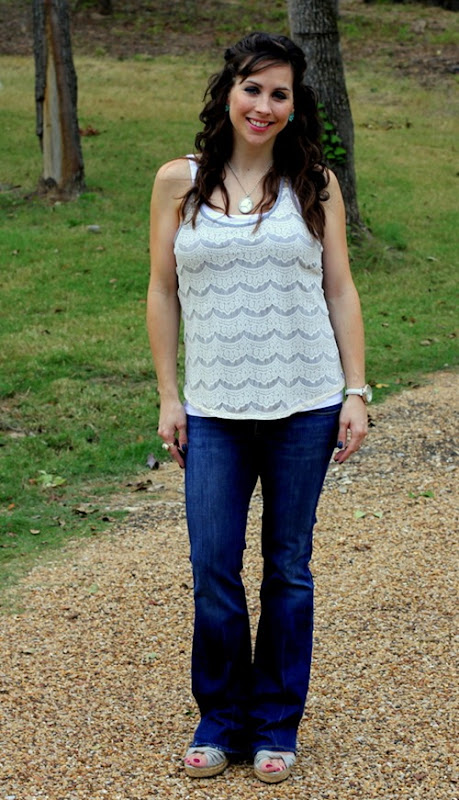 …which I scored at Marshall’s for $5 yesterday during my first official outing with all three of my girls (it was an adventure, but we survived).

So, what else is new?

Because I need your help.

I decided that, since I was having twins, I, of course, needed TWO push presents (from myself) and decided to mildly splurge on a leather bag for the fall.

Which I did, not once, but twice.

However, only one will stay, so that’s where you guys (and my love for surveys) come in. 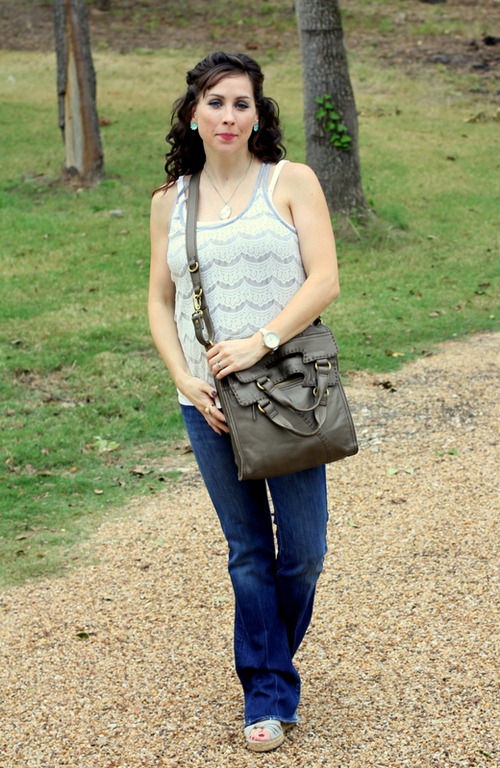 {I’m not sure why I look like a bemused chipmunk here, but it was the clearest pic, so we’re going with it}.

It’s their Abbey Road line, and, although it’s hard to tell in the pics, it’s not olive green, but instead a very dark bronze with a tad of shimmer.

It can be worn as a crossbody bag (which was pretty much nonnegotiable for me) or carried by the handles, like so: 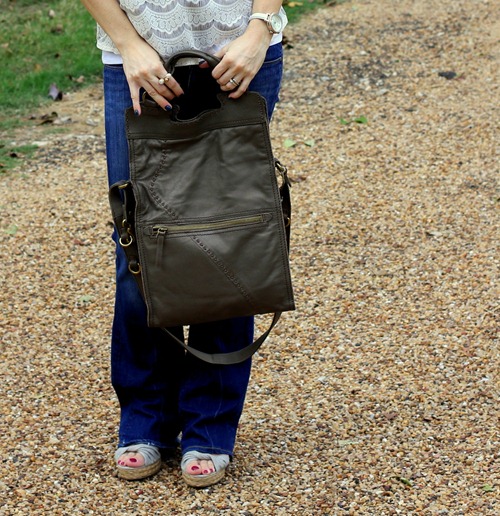 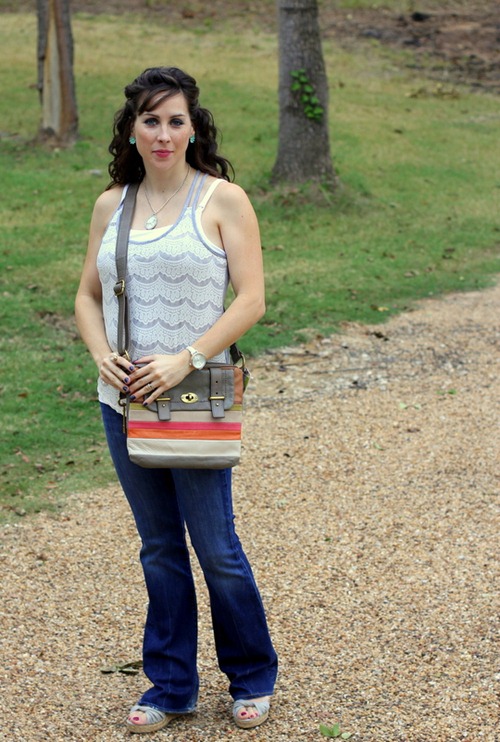 It’s a Fossil bag, with leather/suede stripes in various shades of melon, raspberry, kiwi, and…whatever fruit is a taupe-ish color (I was getting hungry until I typed that last bit). 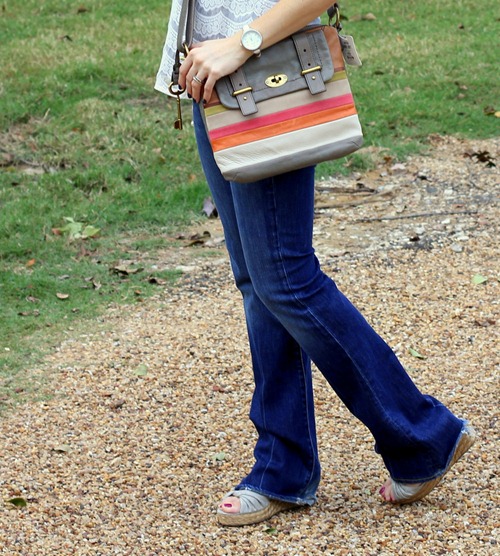 It can only be worn as a crossbody bag, and it’s considerably smaller than the other option.

But neither of those things is inherently bad.

Still, both the similarities (I won the Fossil bag on Ebay for $70, so the price is the same), and the differences have crippled this sleep-deprived mama’s brain, resulting in expressions like this one: 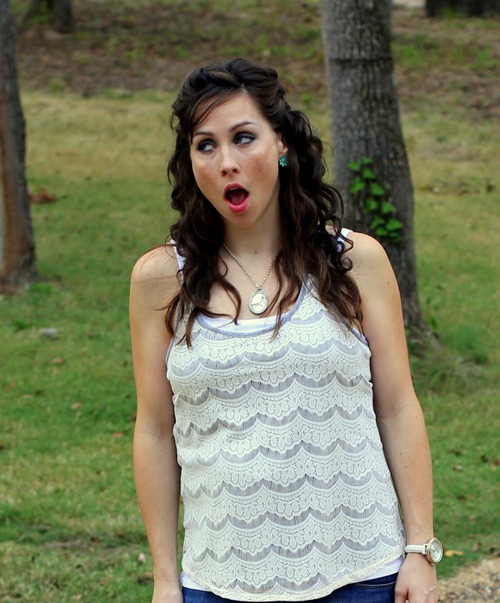 And that look is most definitely inherently bad.

So, all this boils down to the fact that I need your help deciding which one to keep.

I’m including a survey for easy voting, but you know I love it when you explain why you made the choice you did. And you can do that in the comments section.

Which will do wonders for my facial expressions, I assure you.

So…which one should I keep?