I know you guys probably saw this title and thought, “Hm. I’ll believe it when I see it.”

After all, I’ve only been teasing you with promises of The Twin Nursery Reveal for, I don’t know, at least a couple of months now.

But I am very happy to say that the day has finally come. (I’m even happier to say that this means I won’t be getting any more hot glue burns for a while).

So without further delay, and with great joy and exhaustion, I present to you: 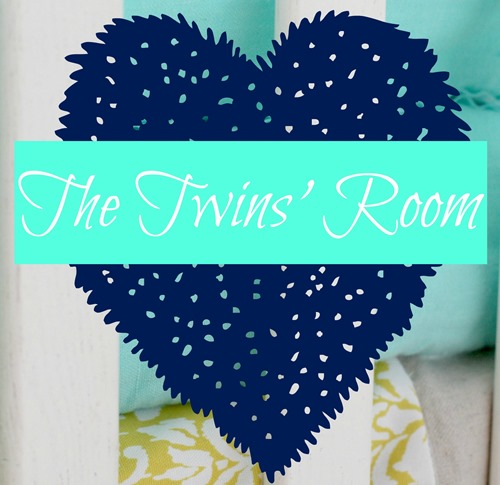 Here’s what you see as you walk in the door. 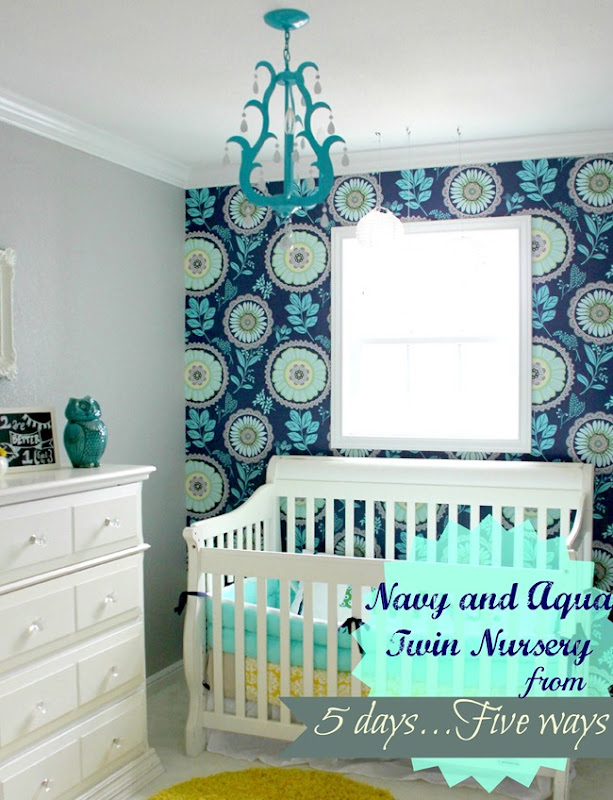 When my mom saw Della’s nursery, amongst the obligatory compliments, she included this astute observation: “There’s not much pink in it.”

And she was right. That didn’t stop Della’s nursery from being mondo-girly. But the fact remained that pink did not play a large role in the color scheme.

So, now I’ve designed a room for not one, but two, little girls. And guess what. I got rid of the pink altogether. Not even a trace of the stuff. 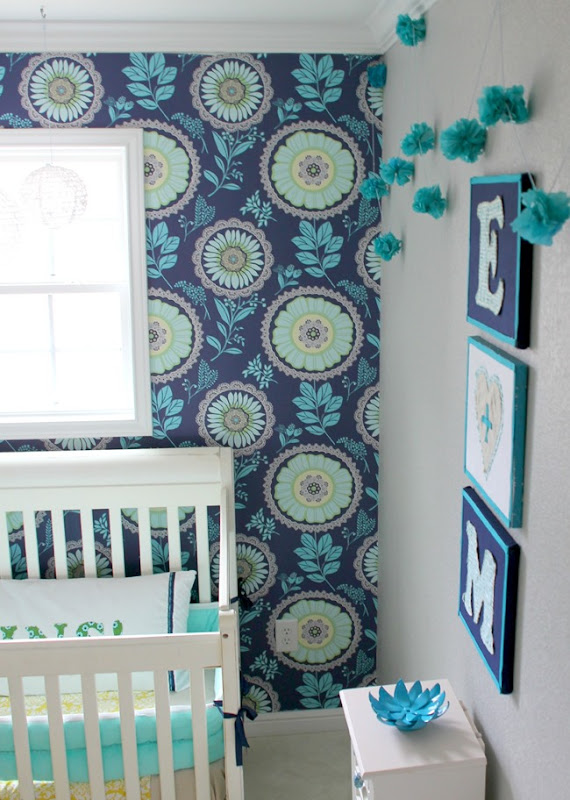 But for someone like me—a lover of all things teal, aqua, turquoise, and robin’s egg—it’s kind of =nursery heaven.

And this time the accent color was a total surprise, almost a fluke even.

Where did that come from? 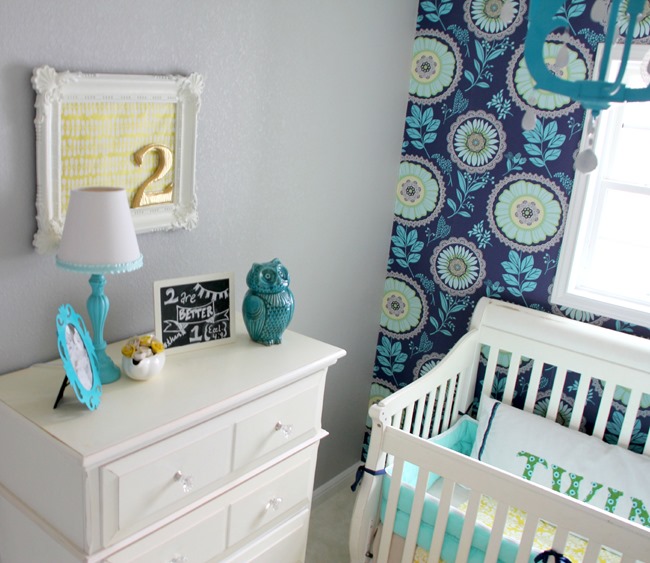 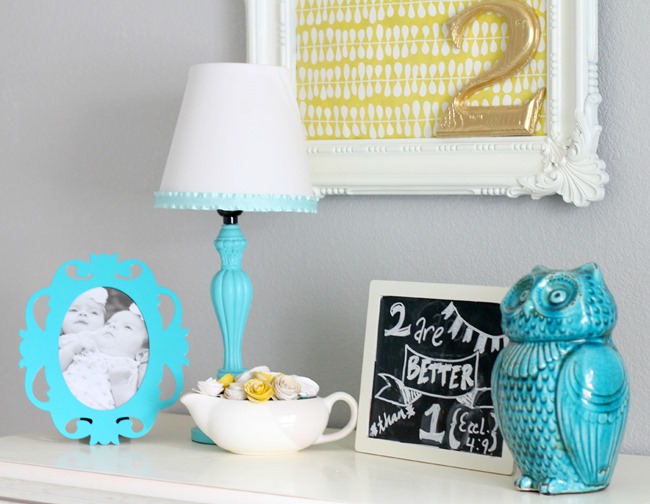 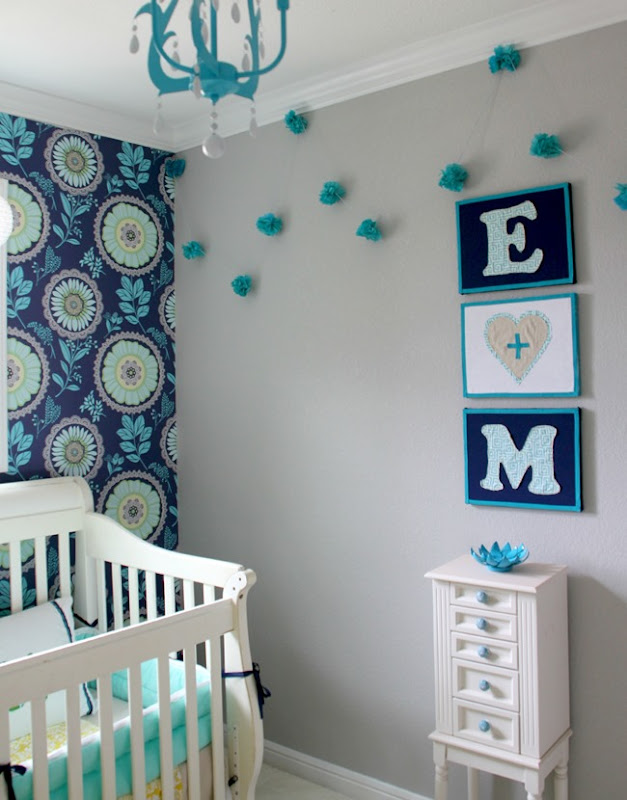 It came from a little round yellow shag rug I bought at a furniture store for $12 because it was too cute and too good of a deal to pass up. 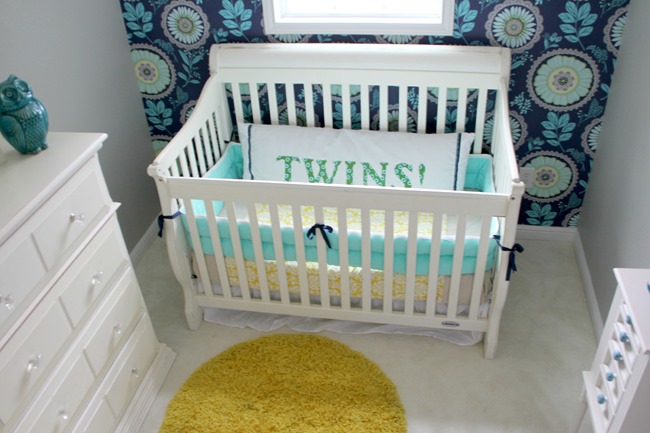 Now, I know this is not how a healthy person shops. A normal person starts with a vision and saves her pennies so that she can splurge on a few key pieces which will help her achieve the vision in its purest form. 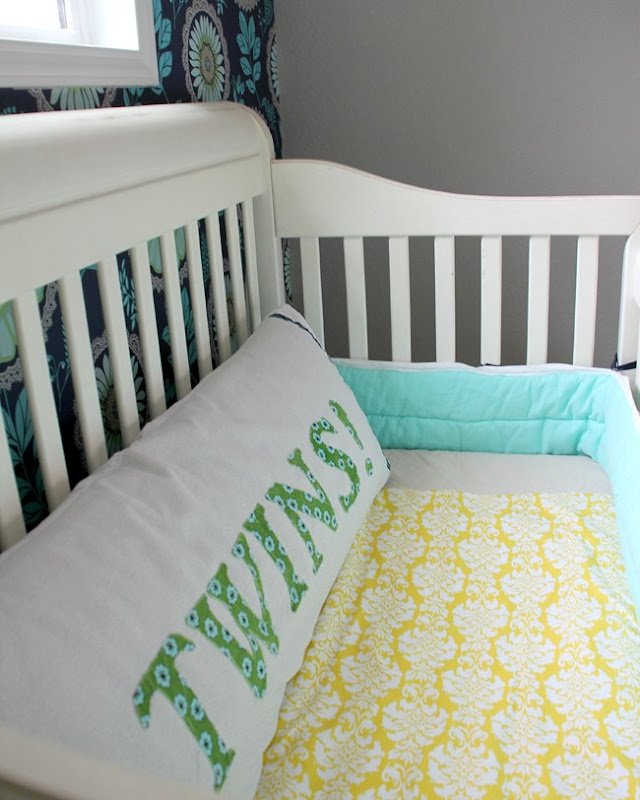 Not me. Oh no. I start with a vision—namely that gorgeous Amy Butler wallpaper that Graham and Brown was nice enough to give me to try out (HOLLA!)—and then I stumble around DIY-ing things and finding things for super-duper cheap that were never intended for the purpose that they end up being used for.

Until finally, I end up with something I like that wasn’t necessarily what I had in mind from the beginning.

Take the bench below, for example. I made it over once already, but once I got it in the room, the colors were all wrong. So…I recovered the cushions (again). And now I love it. 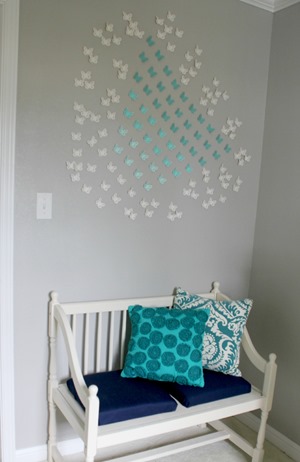 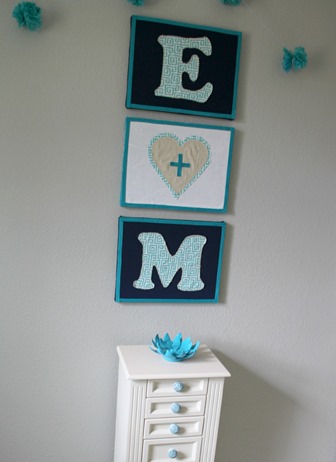 Same goes for the DIY monogram art, which I spent an embarrassing amount of time doing and redoing (and doing again) before I finally found a color/pattern configuration that made me go, “Aaaaaah,” as opposed to, “Erm…not quite.”

I think I’ve mentioned that I’m quite the selective perfectionist, yes? 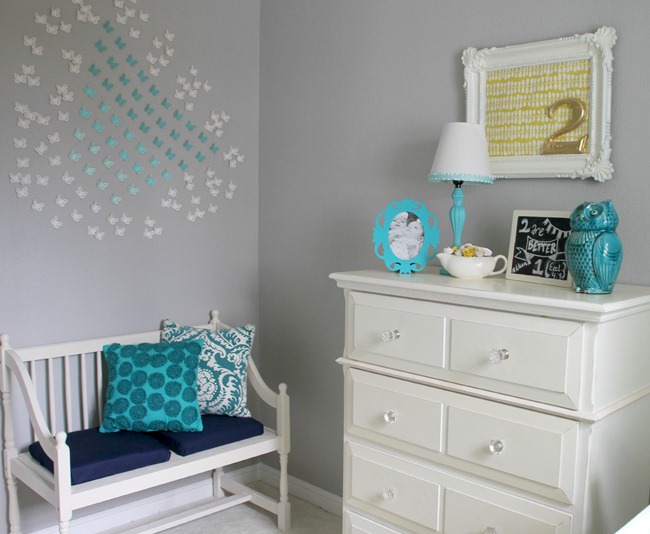 P.S. Speaking of, if the gaps in the butterflies are bothering you too, don’t worry. I’ll fix them and repost with updated photos ASAP. I’ll also be showing you a tutorial for the butterfly art for tomorrow’s Try-it Tuesday, so stay tuned. 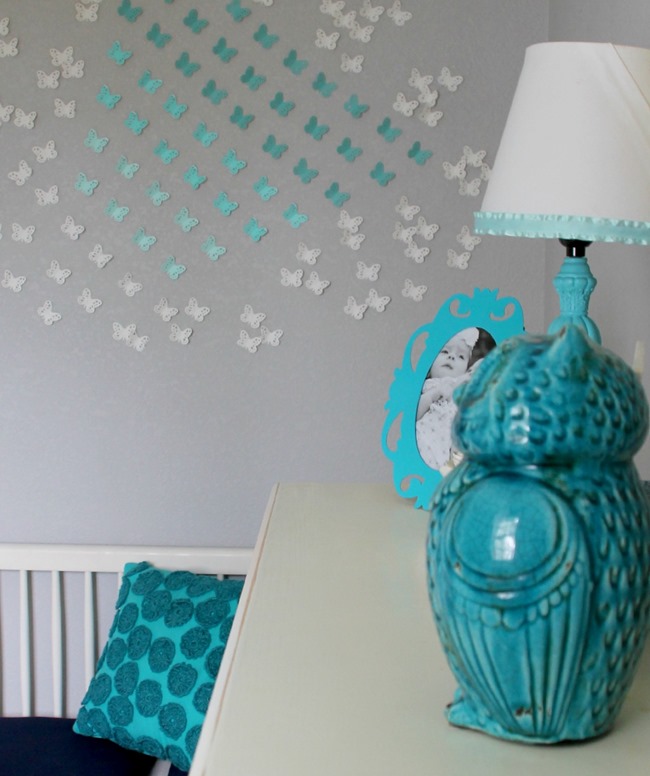 At some point, when I was spray-painting (yet another) something-or-other, I said to Shaun, “Someday, I’m going to do a room reveal in which I haven’t first DIY’d every decoration in the room.”

And he just smiled. Because he knows me too well to bother saying anything. 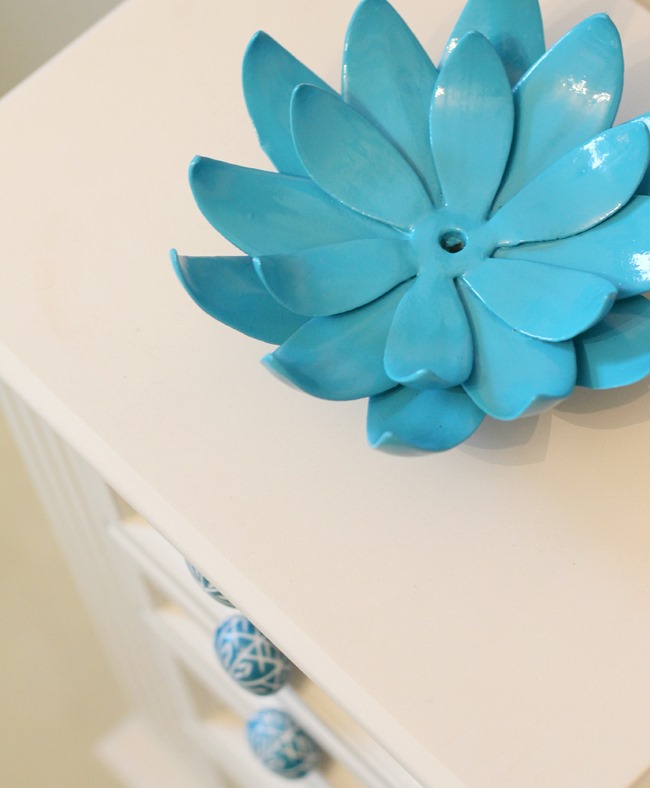 Speaking of spray paint, that turquoise flower is from Hobby Lobby (80% off and it still cost $6) and was the dullest shade of ugly mixed with blah before it got a few coats of paint. Spray paint really is magic.

{Yes, I did mean to use the phrase “speaking of,” yet again; it’s late as I’m typing this, and my brain has decided that “speaking of” is the only acceptable segue that will do for this post}

Here are a few of my favorite details in the room: 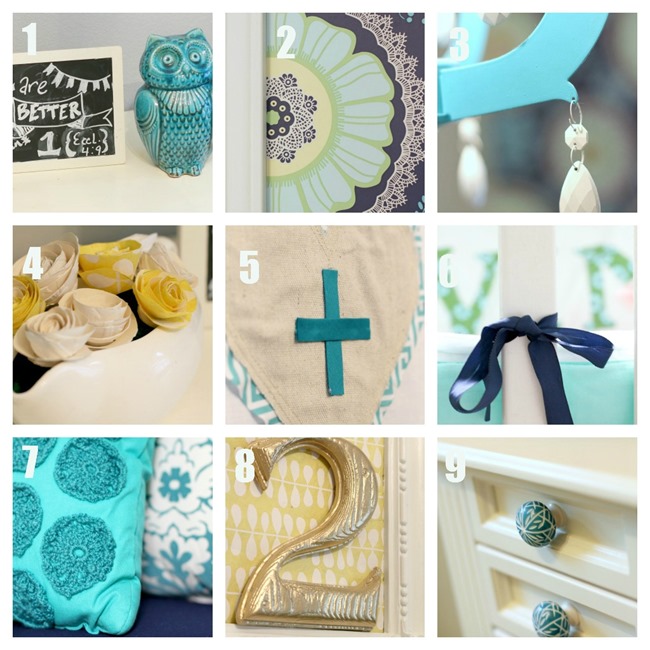 1. A little chalkboard from Walmart that I spray-painted (of course) before attempting a bit of chalkboard art with a very thick-tipped chalkboard marker. The owl was a fun find from Marshall’s.

2. The wallpaper that started it all. Amy Butler’s Lacework in the Midnight colorway. A huge THANK YOU to the folks at Graham and Brown for sending me a roll (plus a little when I ran just the tiniest bit short). It was my first wallpaper hanging experience, and I managed not to royally mess it up. In fact, it was a cinch once I finished scraping and sanding the wall that I forgot to tell my husband not to texture because I would be adding wallpaper as an accent.

3. That turquoise chandelier used to be black on black, believe it or not.

4. I rolled those little paper flowers, knowing full-well they were an absolutely unnecessary and extravagant waste of time. But aren’t they just the cutest?

5. I pilfered the heart shape I used for my “Little People” shirt from a few weeks back to round out the fabric monogram art I made. Note: bias tape works even better than ribbon on little accent pieces like that plus sign. 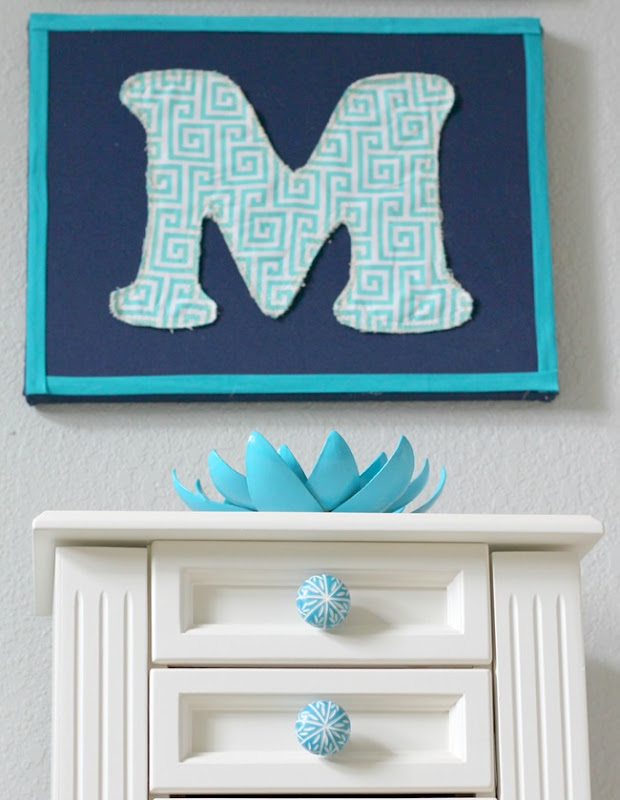 I had to gently remind him that one of our girls’ names is Magnolia. (To be fair, I debated using “N” for “Nola,” so his confusion was understandable).

6. Yet again, the “bedding” is a mishmash of things I made, hacked, recovered, and/or cobbled together to create something I liked. 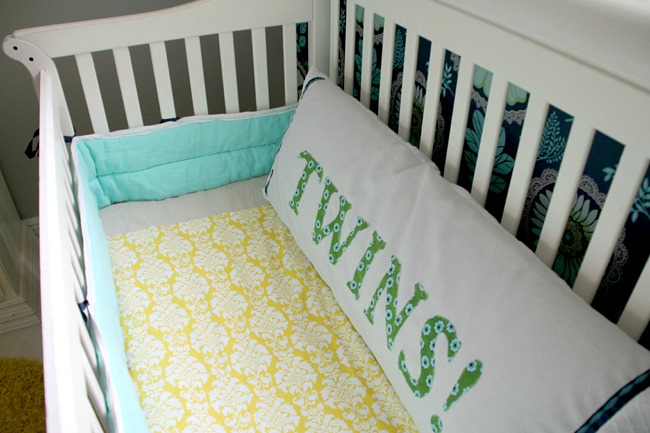 I recovered a Goodwill bumper in aqua linen that I had bought from a friend ages ago for—get this—$2/yd and had no specific plan for. Until, of course, I happened to notice that it matched the aqua in the wallpaper ex.act.ly.

The “crib sheet” is really a yard of fun fabric with painter’s drop-cloth sewn along the sides and tucked under the mattress. I’ll probably trade for another pattern when I get tired of the yellow (I’m thinking a gray and white chevron might be fun in the future to pick up on the wall-color, which is Sherwin William’s Light French Gray). I swiped the bolster pillow (formerly red/white polka-dots) from Della’s old room, and made a custom cover for it from some Goodwill fabric and ribbon I had lying around. I would love to say that I just whipped it out in a jiffy, but this was another project that had to be tweaked a bit before I got it right and ate up more than its fair share of my daily (weekly?) craft time. Not to mention sanity.

7. Both of these accent pillows come from Target. And I even paid full price for them. The turquoise damask is staying as it’s well past its return date. Plus, I love it. But the one with the doily flowers (for lack of a better term) is still within its legal returnable limits. So, what do you think? Should I keep it?

8. You already know about the “ #2” from the nursery sneak peak. But I still thought it deserved an honorable mention for being the only thing in the room audacious enough to rock the gold shimmer.

9. Y’all also already know I’m a knob freak. But these beauties are way up there with my all-time faves. They’re even prettier in person.

I got them from Hobby Lobby for 50% off (which they almost always have as a special). 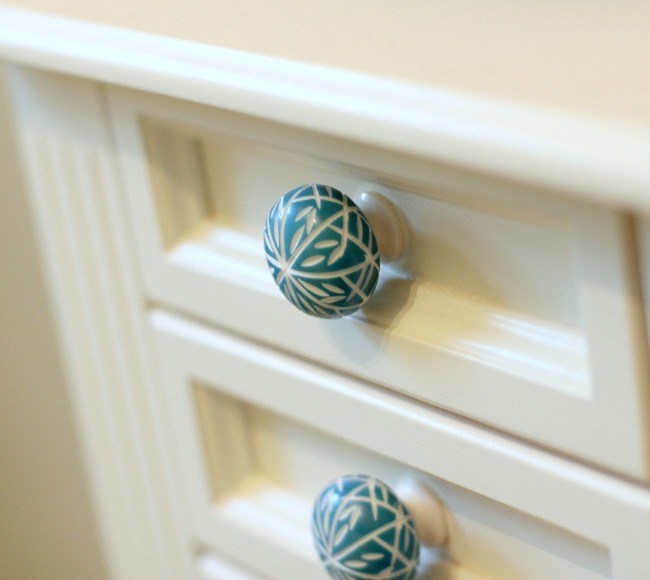 So, that just about does it for me. I’m pretty relieved to have finally, finally, entirely emptied the contents of the nursery-planning portions of my brain into this room. It’s a little less cluttered up there now. Which maybe means that I’ll actually remember the name of that gym member who’s told it to me three times already, making it way too shameful for me to even think about asking again. (And I used to be so good with names before those little brain-suckers I call my children came along. I guess it’s a fair trade).

Speaking of brain-suckers my children, they were happy to interfere help with the nursery preparation and photographing. 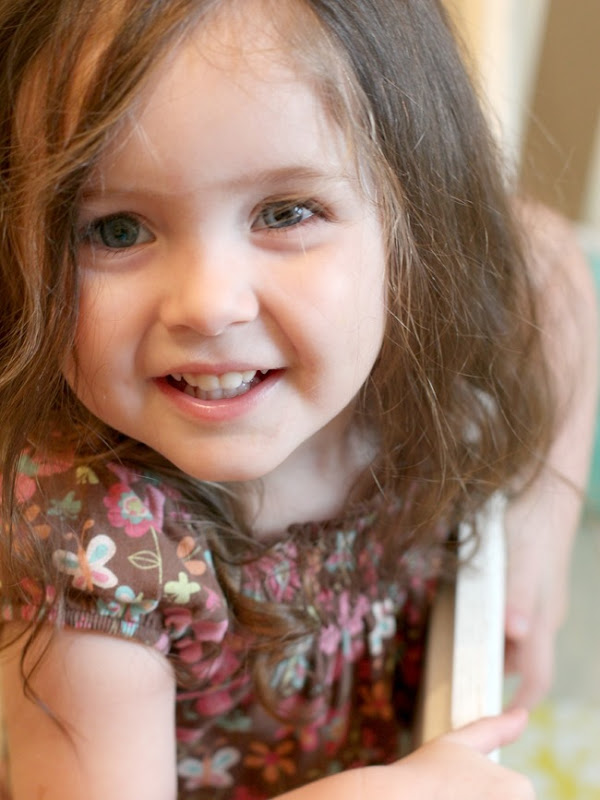 Della thought the crib looked better with her climbing on it. 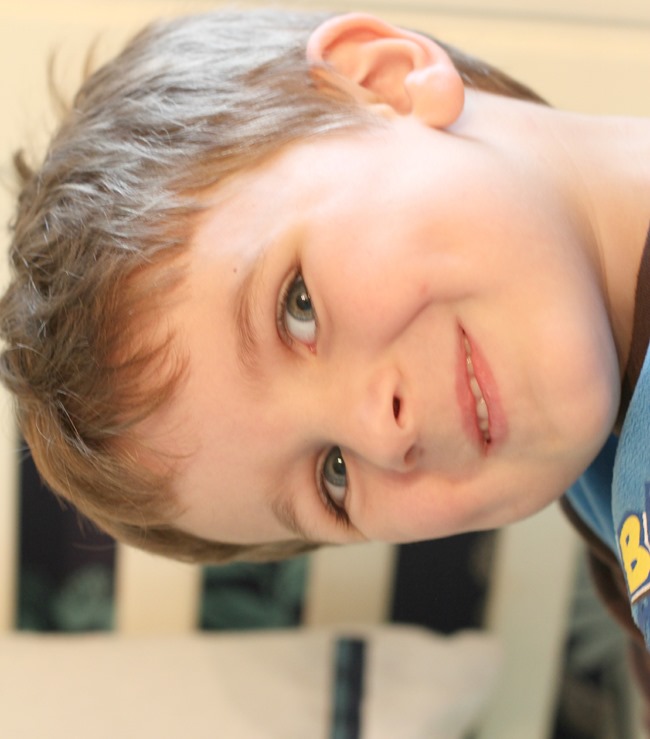 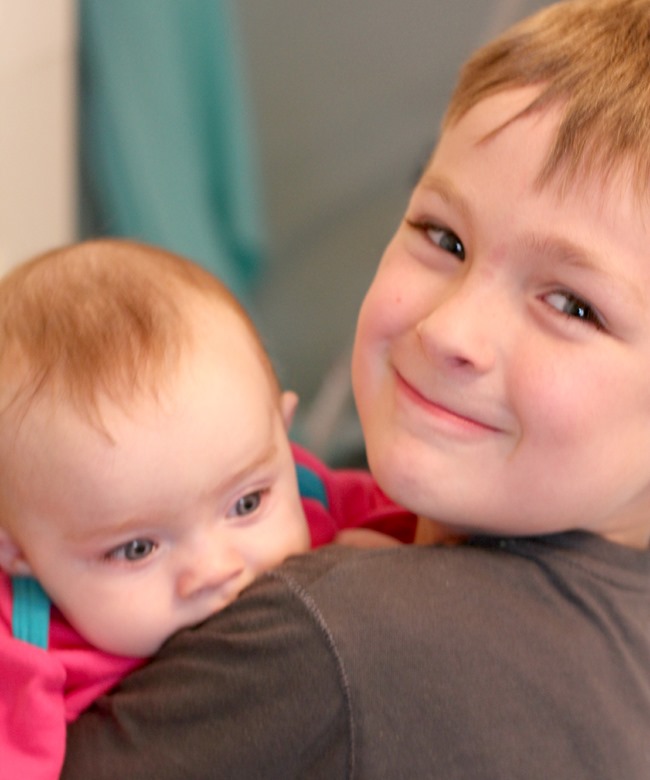 And Ezra was busy being a firstborn and actually making himself useful doing one of the things he loves most in the world—holding his baby sister(s).

(Clearly Nola had resigned herself to the reality that Mama was not going to be feeding her any time soon and had settled for ingesting lint particles from her brother’s t-shirt instead).

Evy was napping (Praise Jesus!), or all 5 of them would have been running quality control checks at once (because I know you were all wondering how I managed to make a nursery pretty and photograph it with zero interruptions from the little people. Answer: I didn’t).

Was it what you were expecting? (If, indeed, you had expectations).

Is there anything I left out that you have questions about?

If so, fire away! I’ll do my best to answer.

And now I really must go to bed. If I stay up any longer, it’s going to be me, instead of the 5-year-old, saying 7+8 = 52 during homeschooling tomorrow (oops! make that today).

Home Stories A to Z

0 thoughts on “Move-it Monday: Welcome to the Twins’ Room!”