Thank you for your comments, your Facebook posts, your emails, and your IG love on yesterday’s post.  I even got some retweets (and I’m barely Twitter-literate enough to know what that means).

If I haven’t responded yet, I will. I promise.

But just know that you have blessed me with your kindness and your words of encouragement and understanding. I texted a friend that I was worried that I wouldn’t express myself well, and that all you would end up hearing is: “I’m an exercise-obsessed whiner.” And she responded with: “Well, anybody that thinks that is just a self-righteous turkey.”

After I finished laughing, I thanked her for the jolt of reality (even if you did think I’m an exercise-obsessed whiner, I was still supposed to write that post). As far as I could tell, there were no self-righteous turkeys out there—just a bunch of women who all struggle with some aspect of this whole body-thankfulness issue.

I am truly grateful for you guys!

Oh! And, if you haven’t already, don’t forget to go enter to win these beauties: 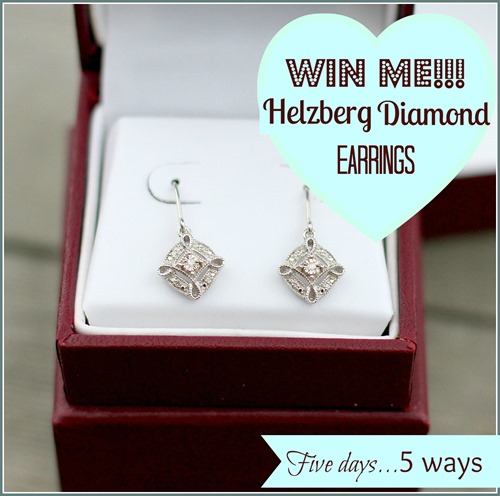 I hear they look great on earlobes of all shapes and sizes! ; )

If you’re thinking, “What?! They can’t possibly already be that old!” I’m thinking, “I KNOW!”

How did that happen?? I’m pretty sure they were still in my belly yesterday.

I made a valiant attempt at a 6-month photo shoot in their crib, but it mostly turned out like this:

One twin screaming while the other dives out of the shot. 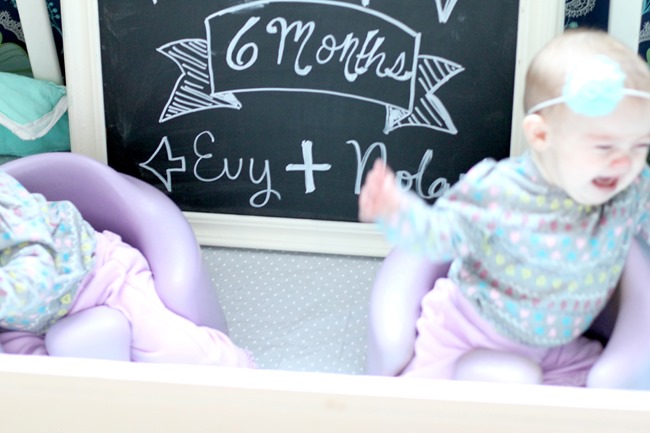 One twin looking down while her sister screams. 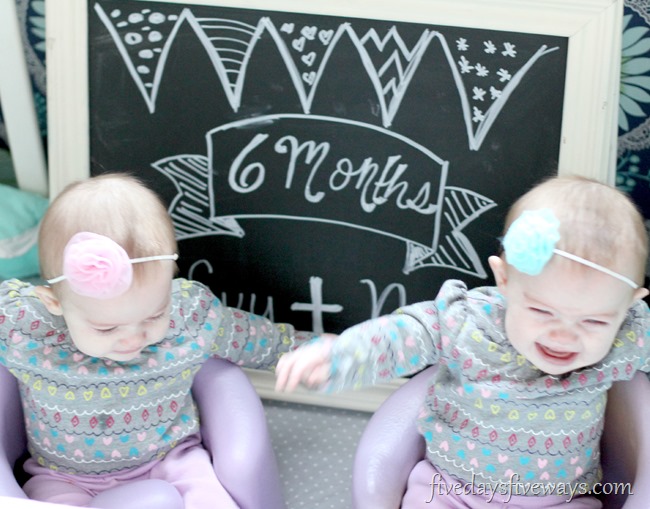 And then switching off screaming/looking down roles with her sister. 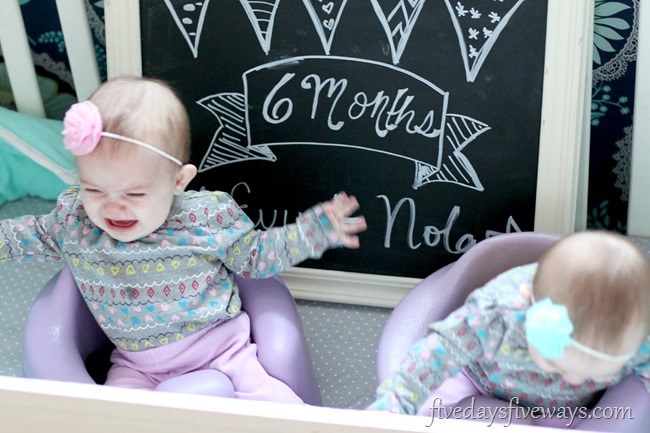 There was also a good bit of sisterly consolation. 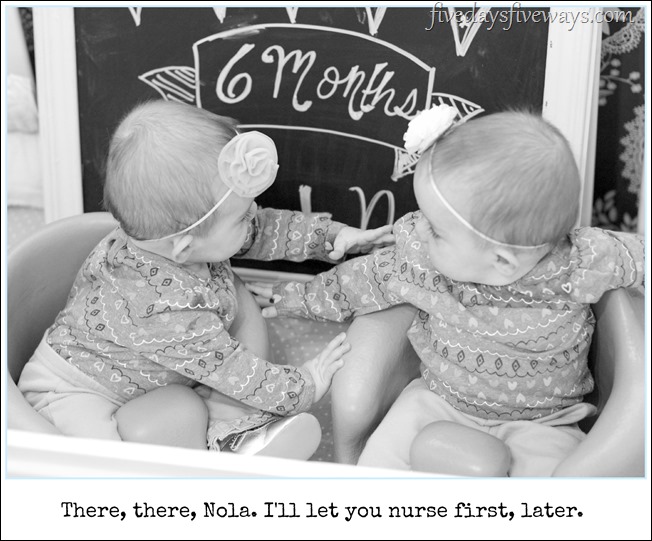 But even that didn’t turn out so great. 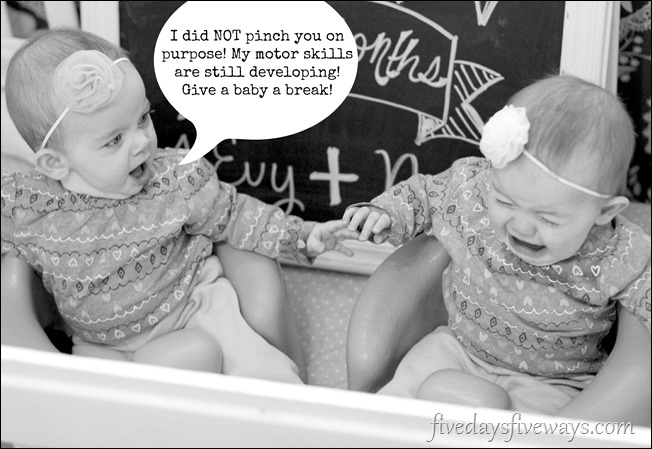 I decided to take them outside so they would at least be distracted by the sunshine.

But I still mostly got this:

At our house, we call this one “The Warner Brother Frog.” 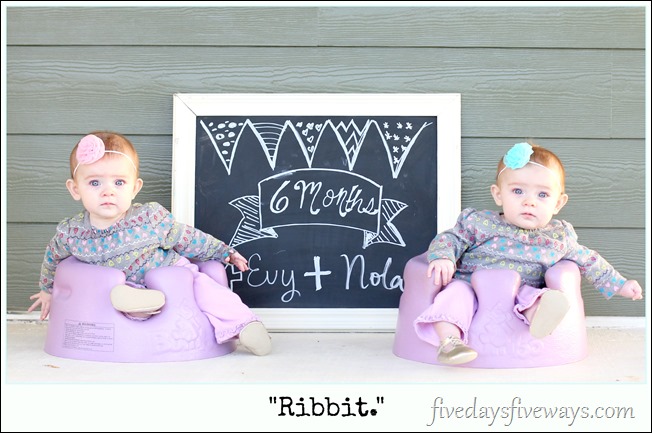 Oh, and just in case you were wondering: 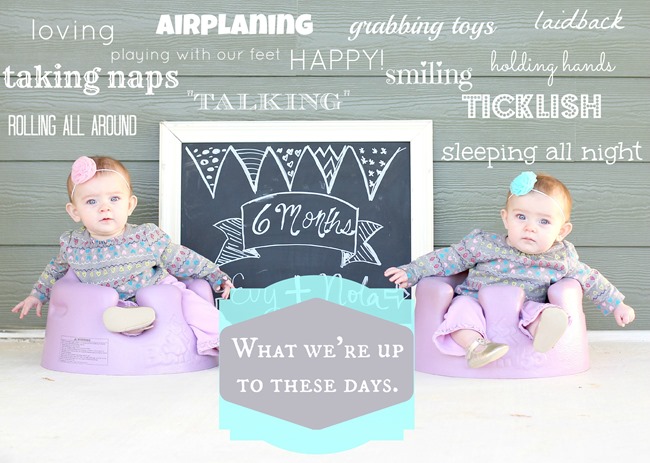 {And yes, I realize that some of those things are personality descriptions rather than actions, and the lack of parallelism is bugging the tar out of me; but I’m not going to change it, even if it makes me twitch a little}

We’ve discovered something pretty cool about our girls. They’re mirror-image twins. The best I can tell, the requirements for this definition are identical twins who have at least one characteristic that is true for one on her right side and for the other on her left. For Evy and Nola, it’s their dimples. They each have a set, but one is much more pronounced than the other. For Evy, it’s the right dimple, and for Nola, it’s the left. Details like that leave me in awe of God, y’all. He loves my girls even more than I do. And that’s saying something.

This is the closest I got to a shot of both of them smiling, which is a real bummer because they are very happy babies. 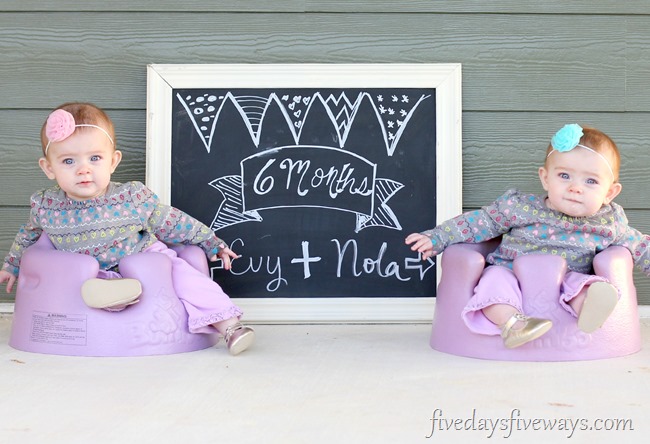 Their personalities are starting emerge more and more, and while they are both equally calm and enjoyable little girls, if I had to guess, I’d say that Nola is the more outgoing of the two.

She smiles with her whole body (mouth open, arms flailing, feet kicking) and tends to be the more vocal of the two.

Evy smiles sweetly (usually with her chin tucked and her mouth closed), and her eyes just sparkle with the wealth of untold secrets she would obviously love to share if she could only get the words to come out right.

In fact, the picture below pretty well illustrates their personalities.

When I asked them if they were willing to take a few more shots, Evy was game (or at least willing to humor me). Nola? Well, she let her opinion be known. 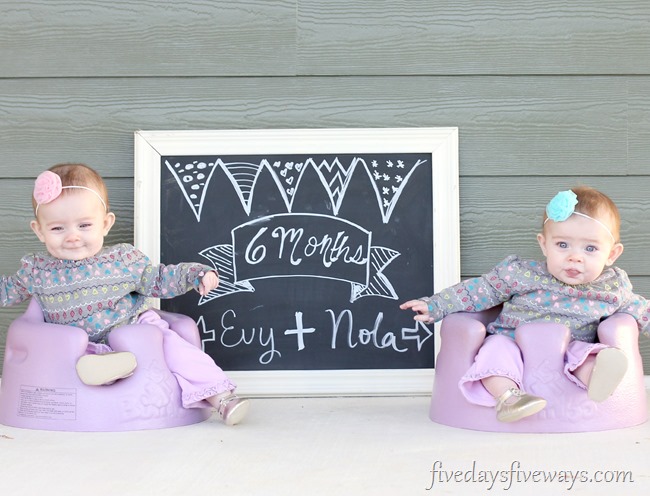 I think my husband said it best when he exclaimed, out of nowhere, this morning, “I’m so glad we have twinsI!”