I had a different post planned for you today, but because of…(insert long list of legitimate but lame-sounding excuses)…it didn’t happen.

So, instead, I thought I’d do a little post about a trip that the girls and I took to “the bread place,” as my boys so eloquently refer to Mrs. Baird’s Bakery Outlet. 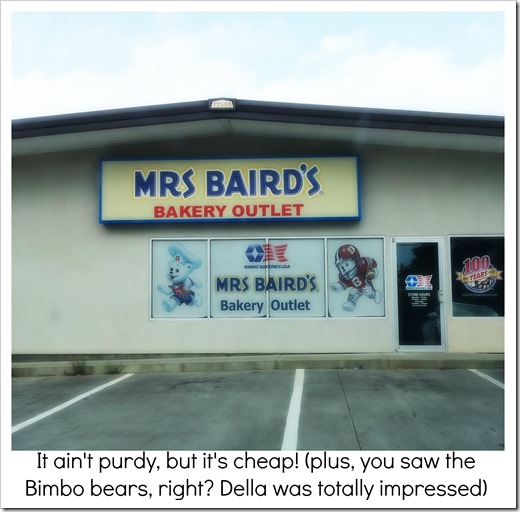 We eat our fair share of sandwiches around here (so much so that Ezra almost starts tearing up when I talk about putting a turkey sandwich in his lunch on the days he goes to school). In fact, my trooper of a husband has eaten a sandwich for lunch for practically the last month straight (and then the month before that, and the month before that, and the…you get the idea).

Also, Della’s latest obsession is “beegulds.” She’s especially wild about the blueberry and cinnamon raisin variety (because if she had anything to do with it, carbs + sugar would be her only two food groups). 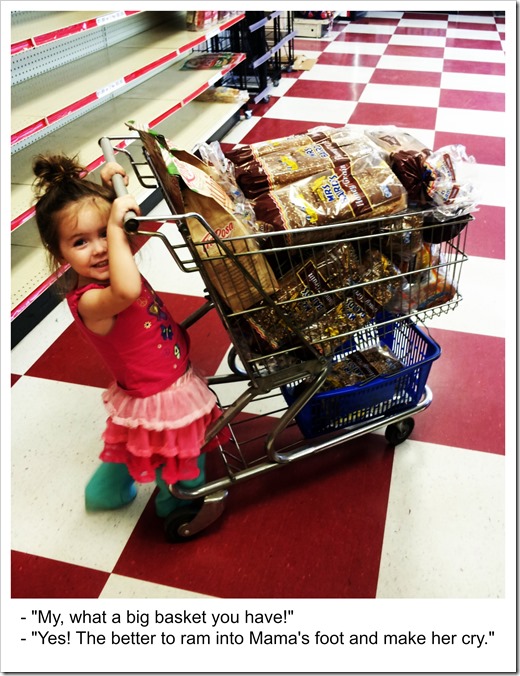 And although we don’t go very often (as in, I hadn’t been since the twins were born), when we do, we go big. 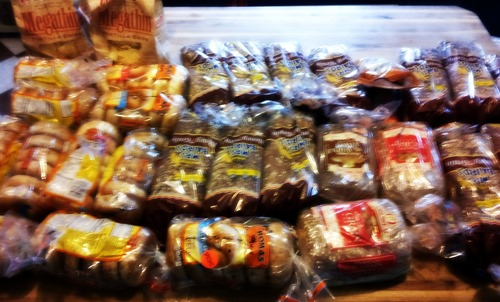 Pardon the horrible-mcawful blurry picture. I was holding Evy while I took it, and she thought it was really fun to grab Mama’s cell phone while she tried to hold it still. That was the best of three attempts, believe it or not.

I did a quick tally (which I didn’t bother to double-check), and I think I ended up with 27 large items (bagels, bread, chips) plus two snack cake/donuts that were free with a certain quantity of purchase, and a bag of pretzels, which was a total impulse buy.

So, that brings the total for each item, without regard for its normal store price to: $1.59.

And considering that fact that I’ve been paying $2.97 a pop to support Della’s bagel habit, I’m going to say that’s a vast improvement.

Could I improve it considerably more by making my own bread? (homemade bagels are never going to happen)

Is it likely to actually happen?

And I, for one, think one bagel in Della’s hand is better than two in the bush…or something like that.

Oh, and just in case you’re wondering what the deal is with bakery outlets—they’re basically a one-stop shop for all things carbs that have been on the conventional store shelf for as long as they can but still have enough shelf-life left to be edible. That may not sound like a very appetizing description, but, with the exception of cheap hambuger/hotdog buns and some breads that get tough/crumbly fast, I’ve found that most of the items (especially the bagels and English muffins) freeze and thaw really well. We have a deep-freeze, which is where the great carb-haul of 2013 is being stored, and it’s really nice to be able to grab a loaf from the mudroom when I notice we’re out, instead of running into Walmart on the way home from the gym with 5 kids in tow just for bread.

If you’re not sure whether there’s a bakery outlet near you, ask around on Facebook or Google it for your area. It’s not fancy, but it’s one way we keep the grocery bill a tad lower for our big-ish family.

So, what about you? Have you ever been to a bakery outlet?

Would you go if you had one close by?

What other money-saving, grocery-shopping tricks do you have up your clever sleeves?