This is the first summer in a long while that’s really felt like, well, summer. This season of mama-ing small children is…hard. Exhausting too. Some days, I wake up already so far behind that I wonder if I will only ever catch up when I’m too old to remember what I was trying to accomplish. Babies are crying. I forgot to take milk out to thaw for cereal. It’s a toss-up whether my to-do list or the mound of diapers that I’ll end up changing throughout the day is more massive.

Even so, the pace this summer has been surprisingly, mercifully, life-affirmingly slow.

I don’t know why exactly. Maybe I’m getting better at this whole motherhood gig. Maybe my kids are getting older, and it’s just a little easier to enjoy ourselves when the vast majority of our conversations doesn’t consist of asking questions like, “Are you poopy?” or “Do you want more juice?” (Not that I don’t still do puh-lenty of that too). Maybe it’s a combo deal.

But I know one thing for sure: as ironic as it sounds to say that making a list has helped me to relax…it has. We’ve made checking things off of our Summer Bucket List a priority over other seemingly more substantial tasks, and it’s been so freeing. And fun!

I thought I’d share a peak of our progress so far: 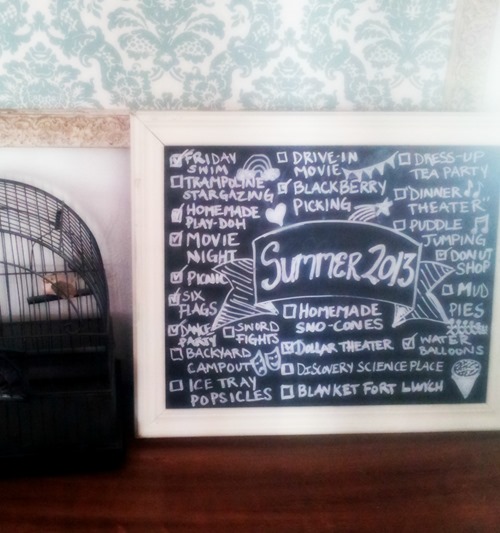 There are still plenty of check boxes to fill in, but we’re plowing through them with gusto, and, of course, doing lots of activities that didn’t make it on the list. 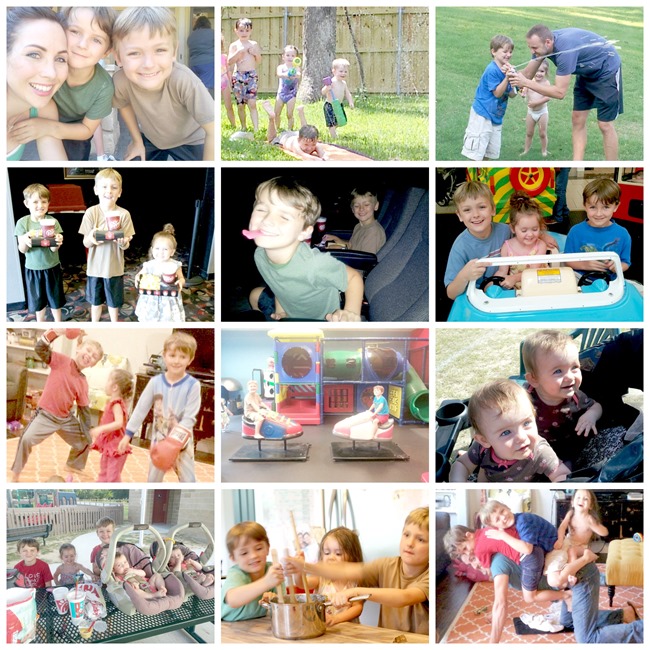 There have been picnics and trips to Six Flags (bottom and top left respectively), play-doh making and trips to the dollar theater by myself with all five kids—whew! (bottom middle and second row), silly string wars and slip n’ slide parties (top middle and right), soccer games and dance parties (third row, far right and left) and much, much more.

As evidenced from several of these pictures, Daddy is sometimes right in the thick of action, but more often than not, it’s just me and all five kids traipsing around town, like some sort of miniature, ragtag circus, featuring two of the cutest little blue-eyed twins in existence.

The questions and comments—“Are they all yours?” “Are you done?” “Are those twins?” “Bless your heart. You have your hands full.”—are endless and so repetitive that, when a friend of mine likened our outings to the movie Groundhog Day, I found myself nodding vigorously.

But I don’t really care. And neither do the kids. We’re too busy making memories to care.

Plus, the look on people’s faces when I saw we’re probably not “done” is pretty entertaining.

Have you found that having older kids (hey, 7 is old for me) makes summer more enjoyable?

Does making lists (even the fun kind) help you to focus on the good stuff?

What are you still hoping to squeeze into (or is it out of?) summer? (so sad it’s already so far gone!)