On Friday, I asked your opinion about what I should do about my deep and abiding longing to change up my hairstyle (okay, so it was more like a recent impulse, but still).

And pretty much every single person said, “CHOP IT!” With the prevailing reasoning being, “It’s just hair. It’ll grow back.”

So, after I spent an hour or so soothing my long hair’s hurt pride at y’alls being so willing to see her whacked, I went and got my hair chopped. Okay, so actually, I already had an appointment that day which I had made over a week before with the intention of getting my bangs trimmed and my ends tidied up. 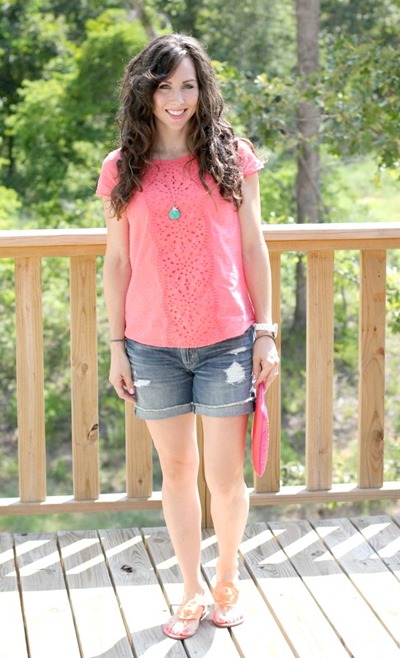 When I marched into my stylist, Hollie’s, salon and answered her usual, “What are we doing today?” question with, “Hacking it all off,” it’s no wonder that she stuttered a little as she said, “Uuuuh, a-a-all off?” (What can I say, I was feeling drastic).

But when I showed her the inspiration collage that I showed you last Friday, she was all, “Let’s do this thang!” (We say stuff like that in Texas). And so we did that thang. 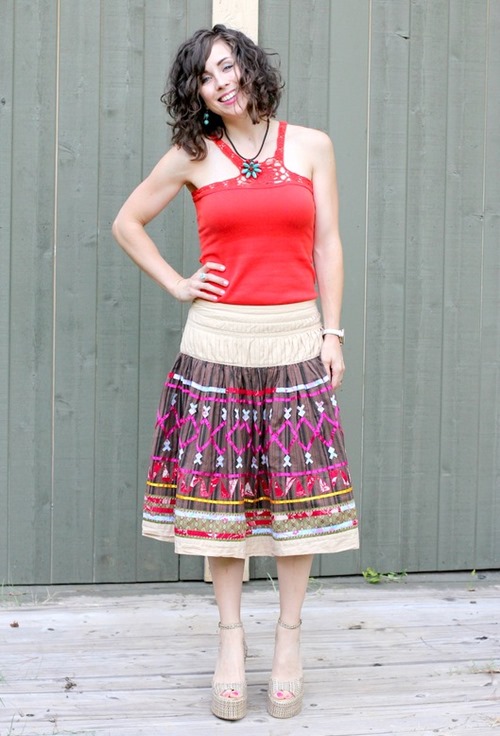 I think my favorite part is the way it angles from shorter to longer from the back to front. 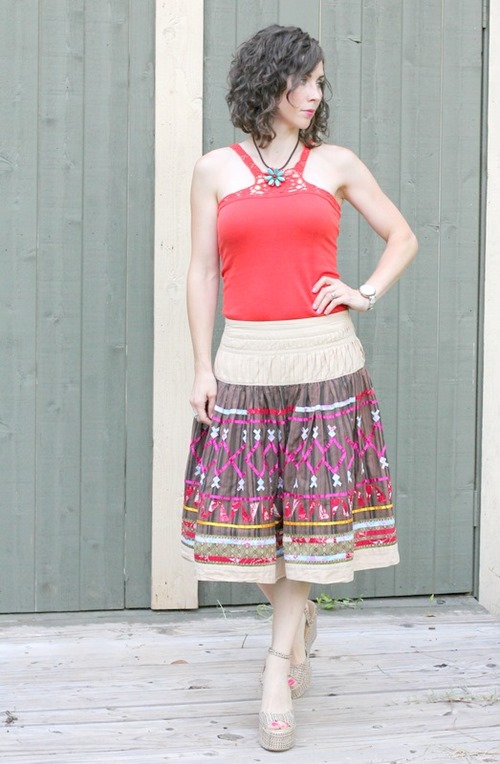 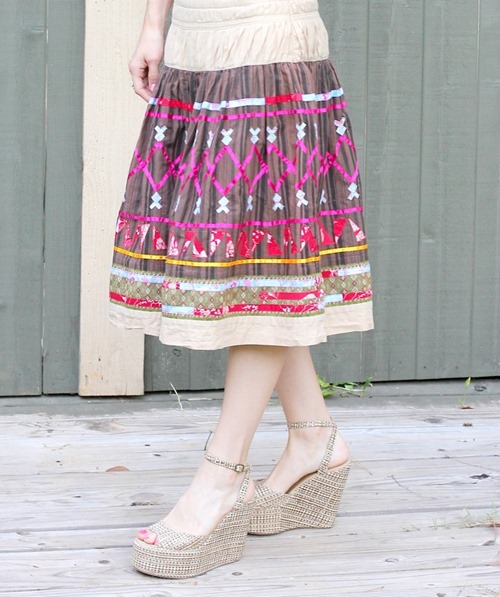 But let’s stop talking about my hair for a minute (oh, yes, please, Abbie!) and discuss that rockin’ skirt, shall we?

I bought it on the same trip to Clothes Mentor during which I scored all of those fantastic designer jeans because, well, it was just too happy to pass up. I was drawn to it immediately, but it was two sizes too big (on the tag anyway). So, as I stood there deliberating and desperately wishing it were my size, the manager said, “You know, I love that skirt. It’s a Neiman Marcus exclusive, and I only get a couple like that in every year. You should buy it!”

Call me a sucker for a clever sales pitch if you want, but the truth is that I didn’t need much convincing. It’s incredibly well-made, and to find something so unique and fun for only $12 is such a rare thing that I promised myself that I would find a way to alter her if need be.

Turns out, the need didn’t be. Instead of hitting me at the waist, she sits at my hips, and the natural fullness of the skirt works well in a larger size.

Plus, I wore it on a date with my husband and the twins, and I really think it’s the ideal date-with-children (now there’s an oxymoron) skirt since a) it’s not fitted, thus allowing for maximum breadstick consumption, and b) it has approximately 52 different colors and patterns, both of which are great for hiding spills and baby drool.

And then was this little ditty 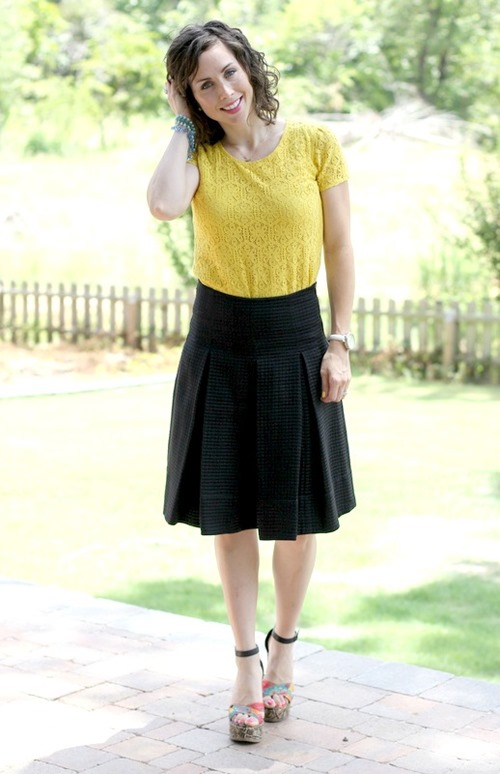 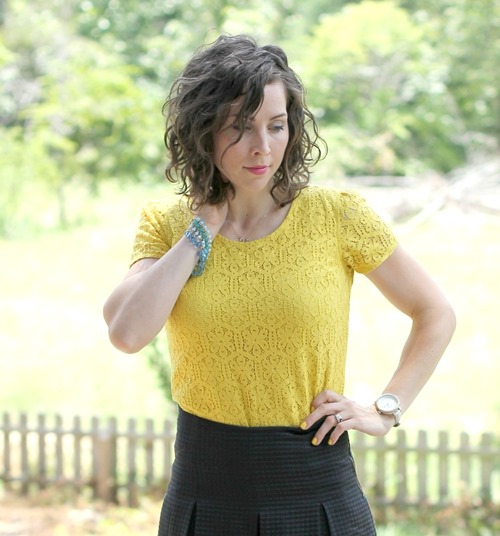 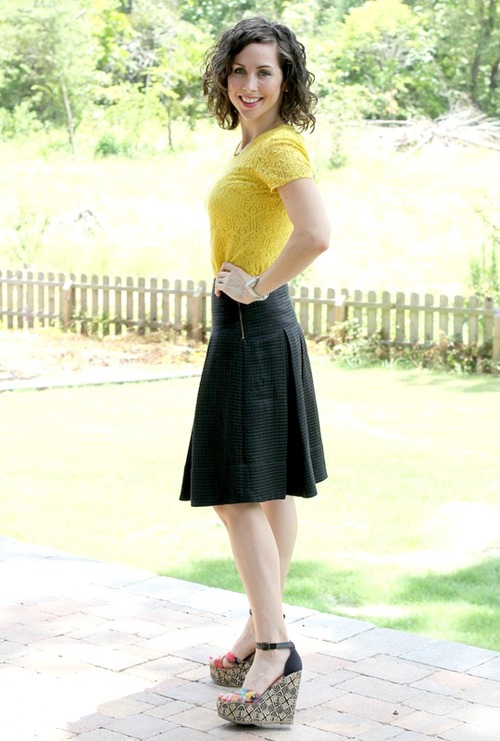 I do believe that this skirt is how the first one is *supposed to fit. But it’s not nearly as conducive to carb consumption, which would make me sad, except that I wore it to church, where the only things I ingested were a tiny bit of communion bread and grape juice. You better believe I loosened up those zippers for lunch, though.

And now, since I feel that a recap is in order for this rather rambly post, here’s the takeaway, folks:

If you have a really great haircut you want, go for it. After all, as one reader so eloquently put it: “I think we get way too caught up in the vanity that is the strands growing from our dermis–eww.” (Ew, indeed).

Oh, and if you have a Clothes Mentor near you, go for it too. There are some fantastic deals to be had.

And now, my friends, it is time for me to return to the real world where laundry and dirty diapers await me.

It’s been fun! See you tomorrow!