Shaun has been taking work trips to Riverside, California for several years. Several of them have happened during Christmastime, and it was probably a full two years ago when he first told me that, if it could possibly happen, he hoped I would be able to spend a weekend with him in Riverside around Christmas because the decorations were amazing, and the atmosphere was particularly festive. It sounded great to me, but I doubted the logistics of it would ever work out.

Plus, I’d already had the privilege of staying at the Mission Inn, Riverside’s stunning, sprawling, historical hotel. I wasn’t counting on a repeat.

Oh, me of little faith.

Thanks to yet another Christmastime work trip and my incredibly sweet family who kept all five of our kids for 5 days, it did work out! And it lived up to every bit of hype that my (not terribly  prone to hype-building) husband built up.

I pretty busy gawking and eating and acting schmoopy with my husband, but I did manage to snap a some shots of the Mission Inn’s brand of Christmas magic to show you. 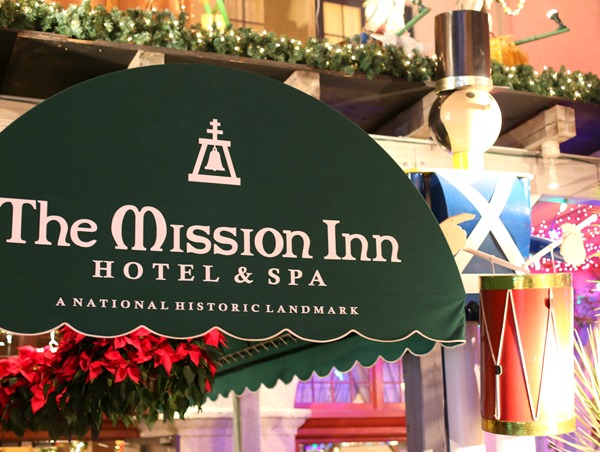 As you enter the hotel, you’re greeted by giant toy soldiers. 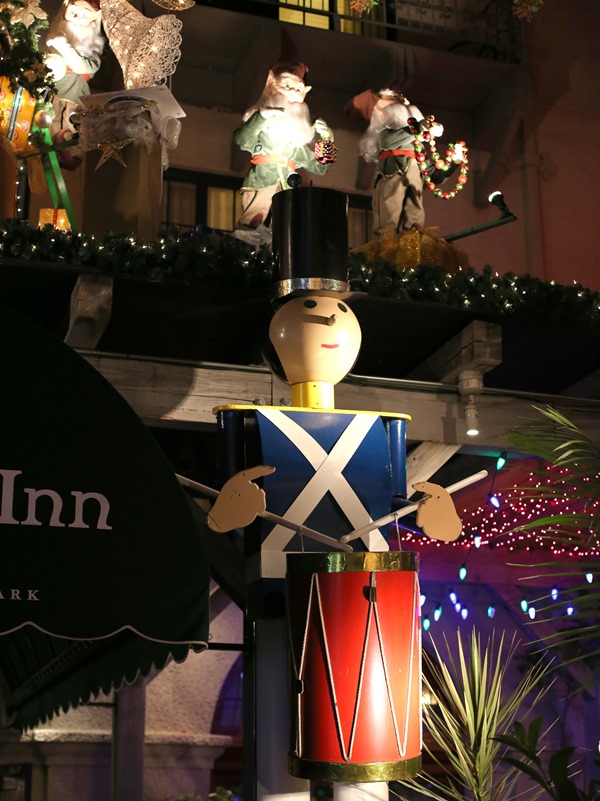 But before you ever get that far… 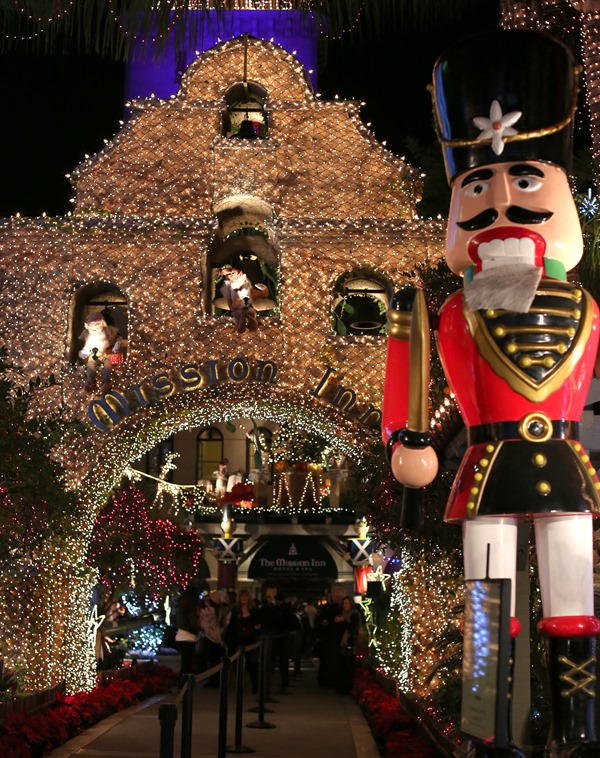 …you’ve got to make it past the giant nutcrackers that flank the grand entry archway, whose every inch is blanketed with twinkle lights. 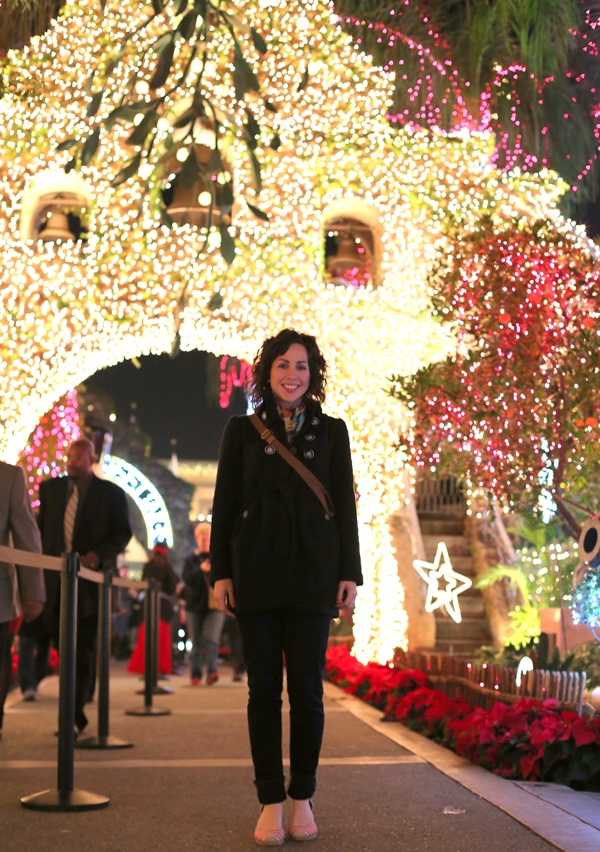 Here’s the view from the other direction. 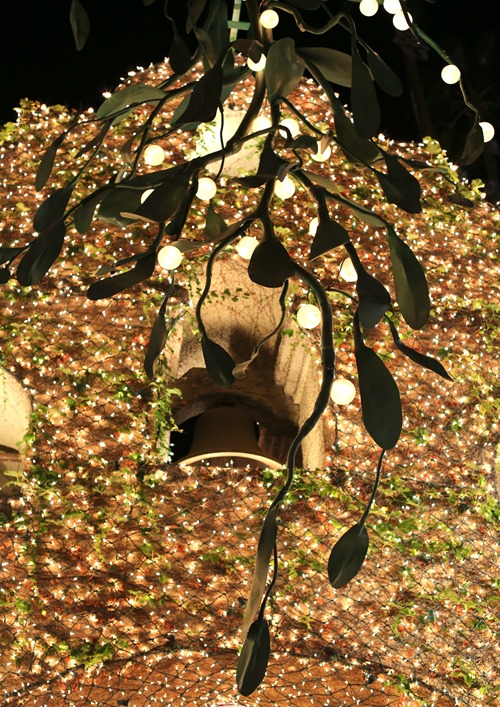 I don’t think I managed to really capture just how all-encompassing the Christmas decorations at the Mission Inn are, but I sure tried. 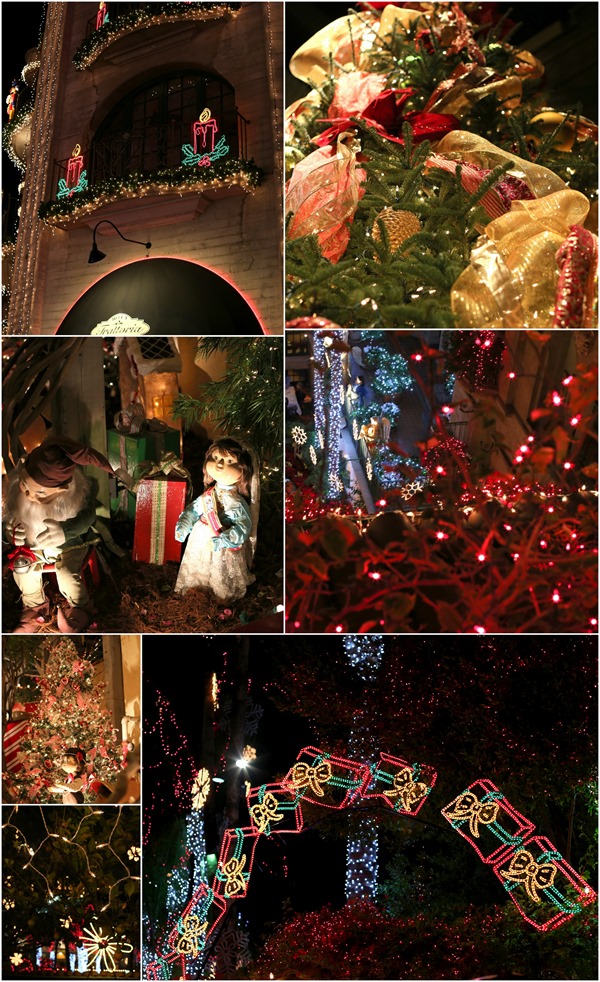 There are even mildly creepy looking angels with comb-overs. 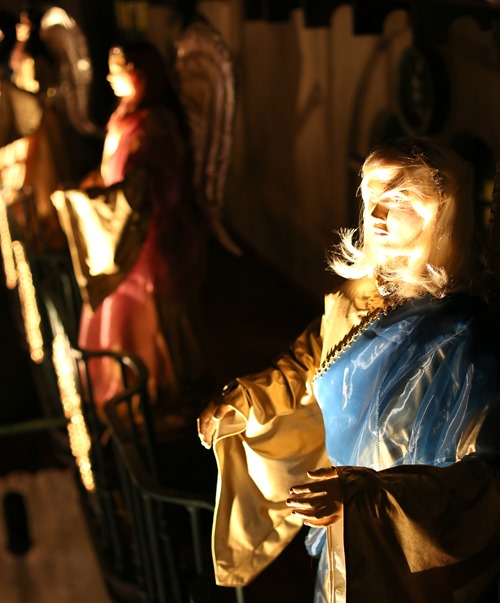 Everything is very traditional and old-fashioned, but that’s part of the charm. It simply wouldn’t do for such an old institution rich in history to be decked out in trendiness like chevron print and polka dots.

It’s hard to tell exactly how ginormous the main Christmas tree is from this picture, but suffice it to say that I took it from the 3rd floor, and the base of it is nowhere in sight. It’s big. 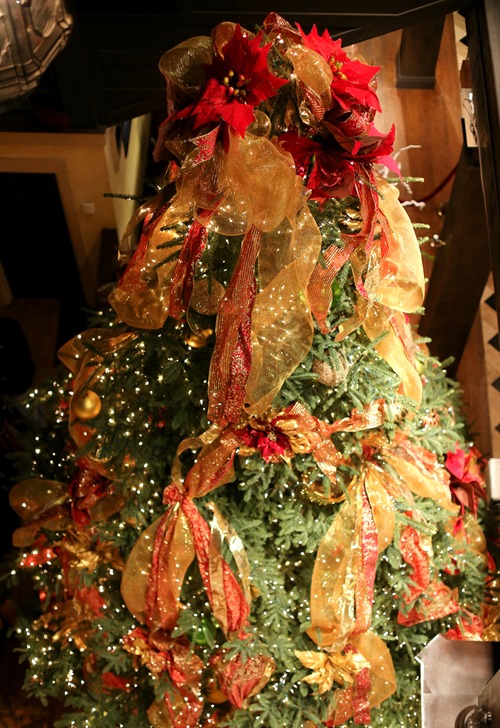 By far, my favorite view in the entire hotel is the vista the one you see as you exit the 4th floor elevator and step out onto the walkway (so convenient that our room has been on the 4th floor both times we’ve stayed there). 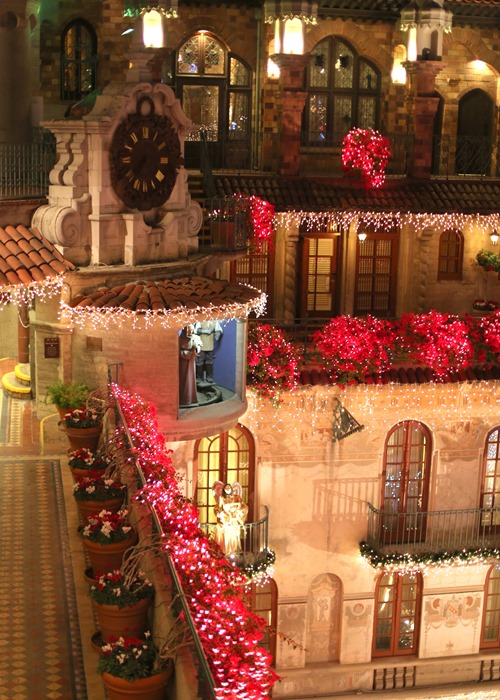 It boggles my mind to think how long it must take to put lights in every single one of those bushes. 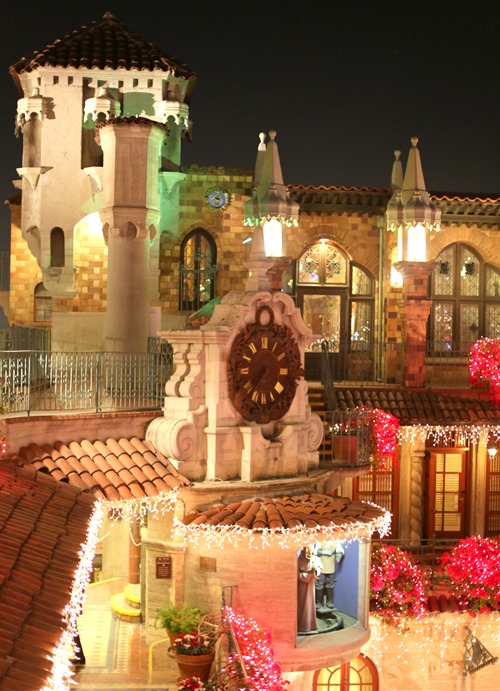 But when an excess of 450,000 people comes to visit you, its worth it to be over-the-top, I suppose. 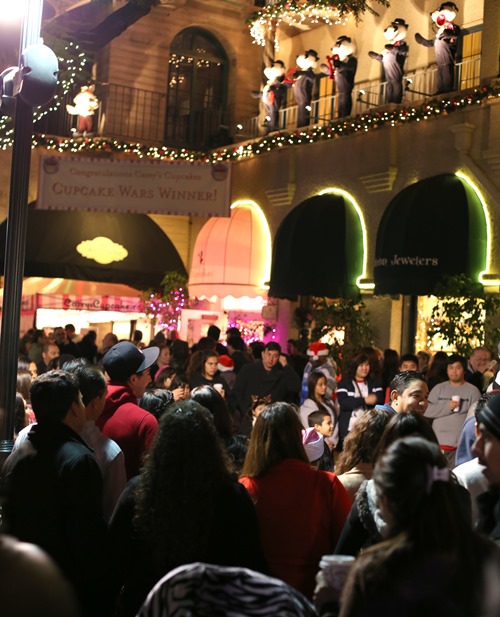 That pic gives you just a tiny taste of the crush of people that turn out at night to fill the courtyard outside the inn, which is full of performers and vendors selling everything from doughnuts freshly fried before your eyes to bags of sugared, cinnamon pecans to “the best hot chocolate in the world” (As someone who has made a similar claim, you know I had to try it, and while I might not go so far as to declare it the best in the WORLD…it was mighty tasty).

The views from the street at night are just as spectacular as those inside the hotel. 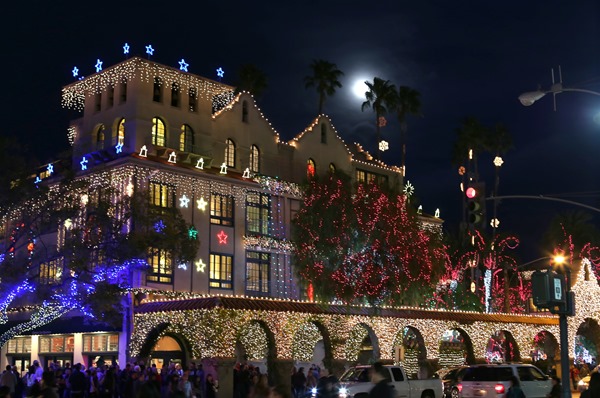 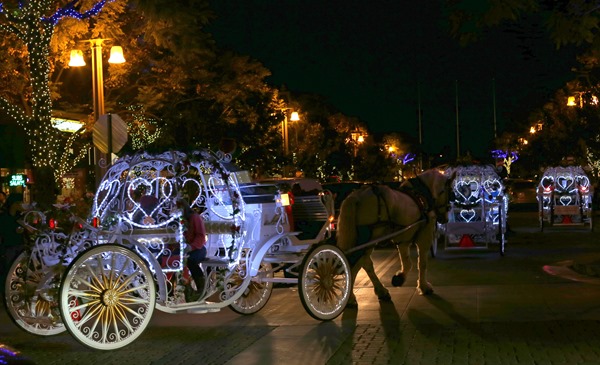 This place is so obsessed with Christmas decorations that even their parking lot is bedecked with a Christmas train. 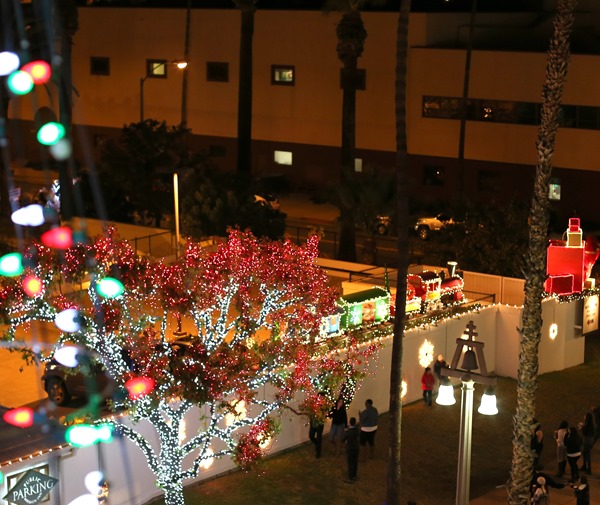 And their pool is surrounded by all kinds of opportunities to get electrocuted. 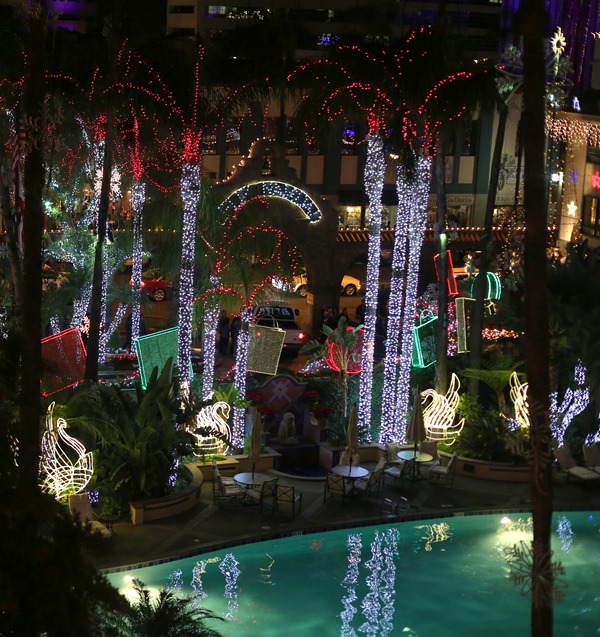 Of course, all the Christmas lights in the world can’t produce the warm, fuzzy feeling I get from hanging out with this guy (Half of you just said, “Aaaaaaw.” Half of you just threw up in your mouths a little bit). 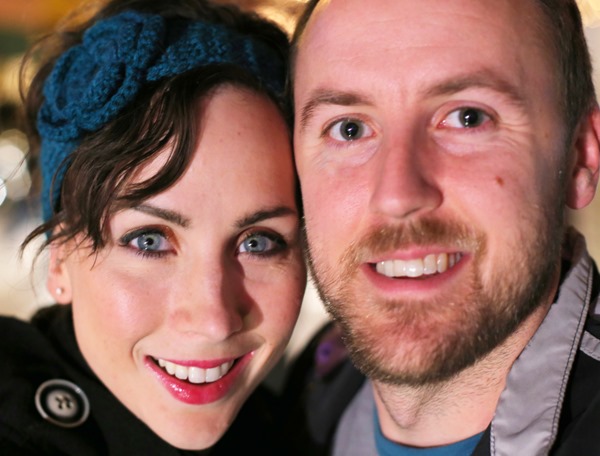 But that doesn’t mean that I don’t heartily recommend a trip to the Mission Inn—anytime, but ESPECIALLY at Christmas. It’s aaaaaaahmaaaaazing.

Have you ever been the Mission Inn? I posted a lot of “behind-the-scene” pics on Instagram during our trip, and I was surprised by the number of folks who had been or were actually from Riverside.

Any other magical, must-visit Christmas locations to report? I’ve never been to Disney during Christmas, but I’m guessing it’s pretty fun.