As I type this post, the melancholic strains of Charlie Brown’s “Christmas Time is Here” song are playing through my brain.

But, of course, Christmas time isn’t here. It’s gone, gone, gone. And part of me can hardly believe it. How in the world did the frenzy of preparations and flurry of torn wrapping paper come to such an abrupt end?

I’m pretty sure I feel this way every year, and maybe you do too, but this year, the outcry on social media seems especially bitter. HOW DARE THANKSGIVING COME ONLY THREE WEEKS BEFORE CHRISTMAS(actually, it was one day short of four weeks, folks). Boooooo!

Still, I feel like we managed to cram a whole lot of celebrating into a short amount of time, so I thought I’d share some moments from Christmas 2013 because it was a very good one.

For the last two years, we’ve had 5, count ‘em, FIVE Christmas celebrations: 1) Shaun’s extended family’s at his grandma’s 2) my family’s 3) our family’s (as in the seven of us) 4) his immediate family’s (as in his mom, dad, brothers, nieces, nephews) and 5) Mandy’s family’s (which we haven’t even done yet this year).

It’s awesome and super-festive and…exhausting. In a good way.

Rather than bombard you with pics from ALL of those things, thus making this the world’s longest post ever, I put together a collage of the fun on Christmas Eve at my mom’s and Christmas morning at our house. 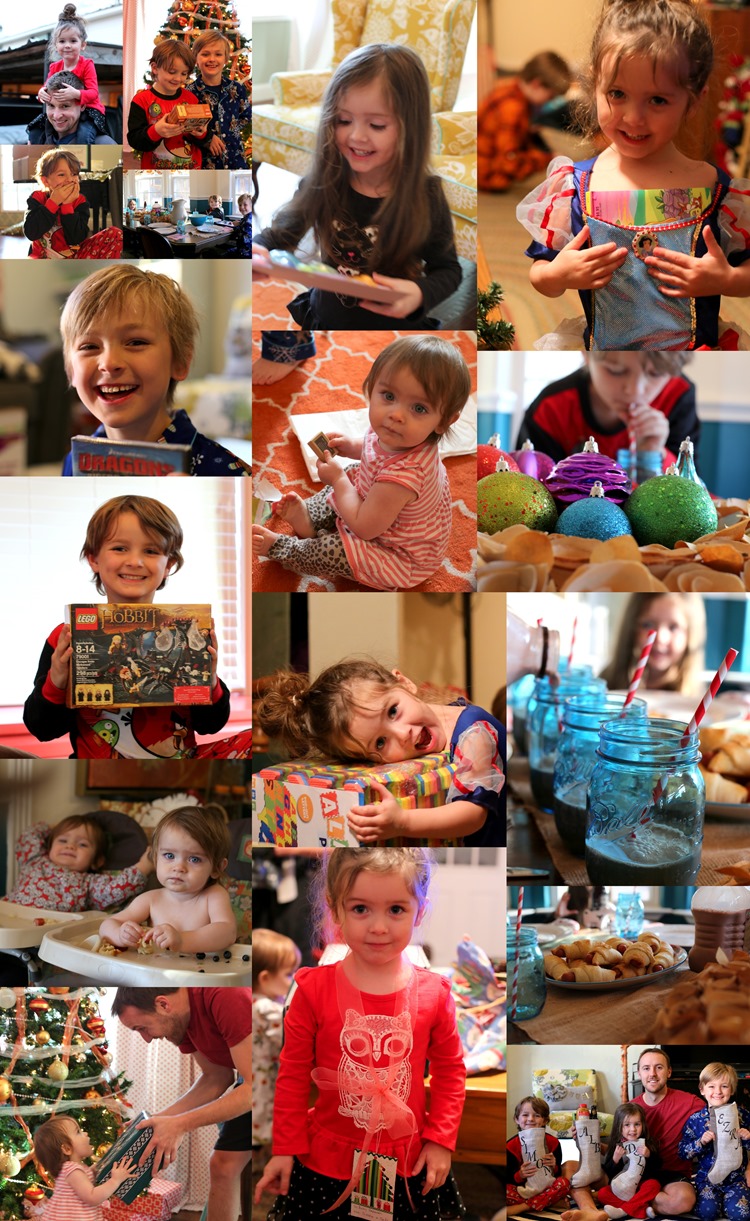 After assuring you that we wouldn’t be doing our special Christmas breakfast on Christmas day…we did. The twins slept in (a Christmas miracle!), and we dived into the stockings (bottom right), and then duginto the pigs in a blanket and chocolate milk (I love the picture, 3 from the bottom right, of Della waiting in expectation as Daddy pours it).

If you’re feeling gypped for twin pics, I totally understand. Even though they are the only twins we have or are likely ever to have, they still get photographed about like every other 4th and 5th child do. Which is to say not much. And now that they’re pretty mobile, getting pics of them together that don’t involve messy high chairs is a wee bit difficult.

Except, of course, when Daddy’s holding them. 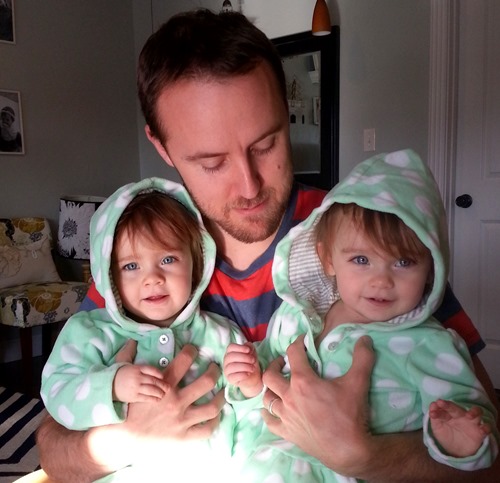 Your heart probably didn’t just about explode like mine did when you saw that since you’re not their mama, but you have to admit they look pretty sweet, right?

Want to see something that’s (technically) just as sweet and whole lot funnier? 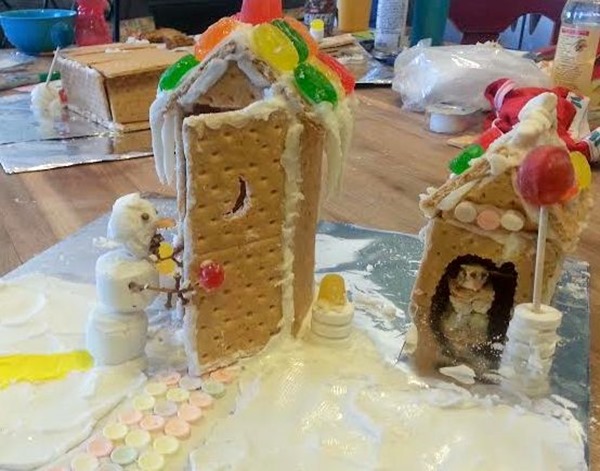 This is what happens when you let adults make “gingerbread houses.” They make (leaning) doghouses complete with marshmallow Fidos (mine) and outhouses, complete with a marshmallow snowman making yellow snow as he runs for the toilet (Shaun’s). You better believe my kids thought this was just about the best thing ever (“He’s going tee tee in the snow,” giggle, snicker, snort).

We started off the Christmas break with a school party (complete with a photo-bombing Nola). 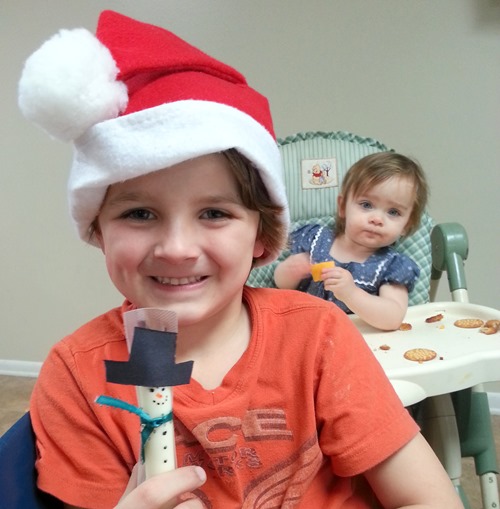 And then my children spent the entire weekend falling victim one after the other to a stomach bug (somehow, miraculously, neither Shaun nor I got it), which resulted in my laundry room looking like this: 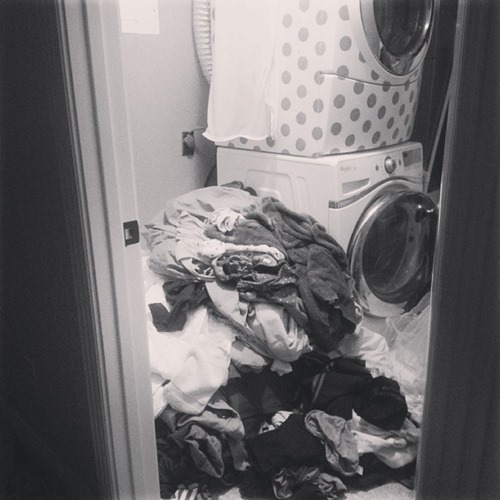 And since the kids were all sick, we made sure to take a trashcan with us (no, I’m not kidding) when we looked at Christmas lights. 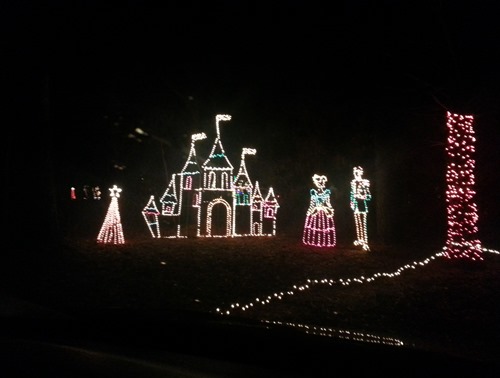 We also made snowflakes out of coffee filters… 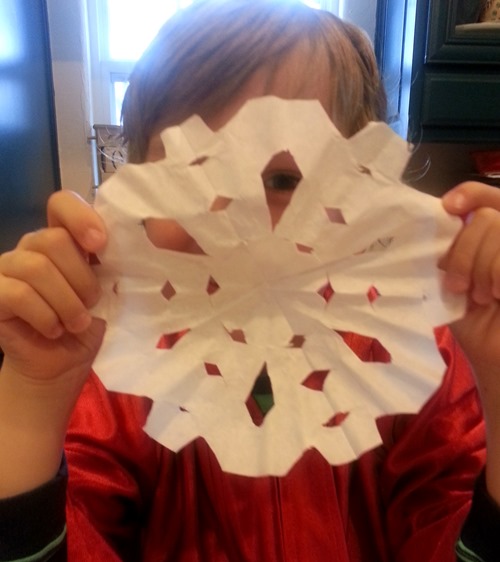 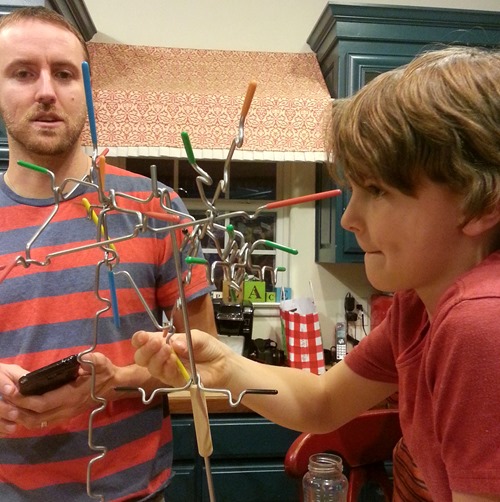 (This is a Jinga-like game called Suspend, and we luuuuurve it).

…and even accomplished amazing feats of strength (apparently, Ezra’s bike was faulty, and it took two grown men straining with all their might plus a third to get the front wheel on). 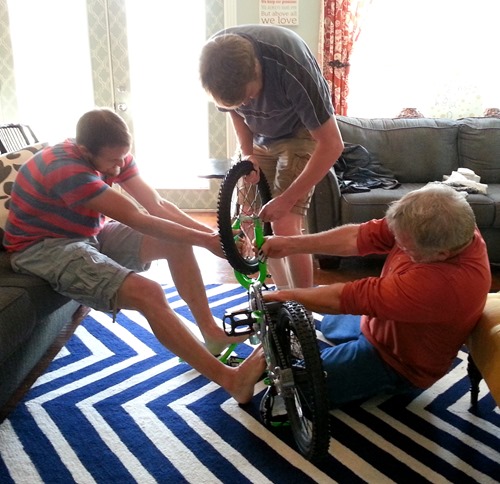 I made personalized Christmas stockings for us on Christmas Eve, despite the fact that I had about 7,564 other things I should have been doing. 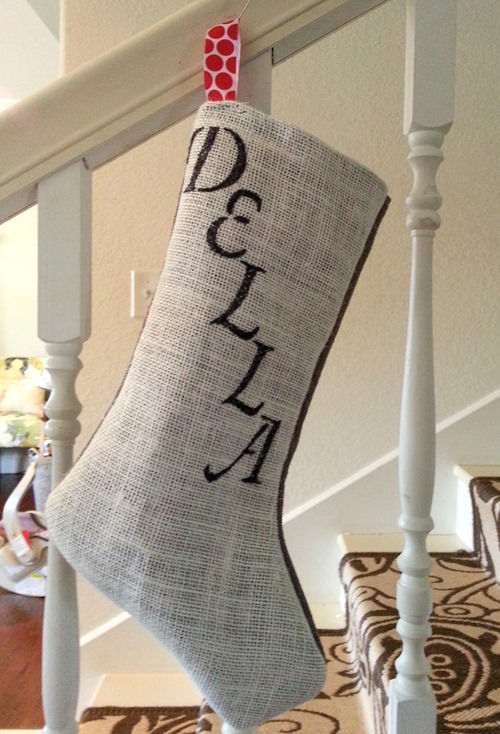 And we all got spoiled rotten with lots of fun gifts. I’m pretty much in love with these flower measuring cups from my Amazon gift guide (good thing the hubs reads my blog, huh?). 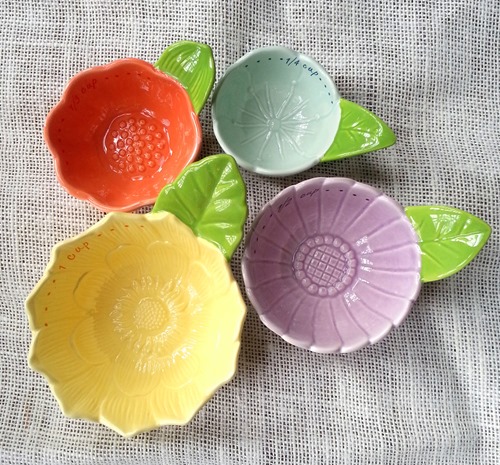 We ended the week by doing church at home. We watched a Christmas Eve broadcast and were reminded, three days after the official day, of the reason we celebrate Christmas in the first place, which is Jesus birth. It was fun to listen as the kids sang along to Angels We Have Heard on High and Silent Night.  And it was comforting to be reminded that Jesus is the light that John speaks of when he says, “The light shines in the darkness, and the darkness has not overcome it.”

And it never will.

How was your Christmas? As you might be able to tell, ours was awesome, but we’re already setting goals to make this next Christmas our least stressed one yet. I’ll let you know how that goes. 😉