Shaun left for a work trip yesterday, and he had been so insanely busy preparing for it, working on another project with my brother, and also managing our rent houses that I barely saw him at all last week.

So, we were determined to fit in a date before he left. Originally, we’d planned on Friday night, since that’s the night that my three older kids sleep over at my mom’s house, and we only have to get babysitting for the twins.

But, of course, Evy started running a fever that morning, so date night was out.

Do you ever get so something stuck in your head that you have a hard time letting it go, regardless of circumstances? Something you’ve been looking forward to, perhaps? And then, you’re tempted to have a great big pity party?

Oh good. Me neither. That would just be silly.

I mean, my children were alive, and my house was still standing. And…nope. That’s it.

And nobody rested or napped like they normally do, and Evy insisted on being held constantly.

Which meant that date night would have been the perfect exclamation point to an exhaustingly mundane day.

Only, there was no date night anymore. (Can you tell I was having a hard time letting this go?)

And I had to cancel a running date with a friend too. At which point I decided that fevers are pretty much the scourge of the earth and should be outlawed.

Then, I had a stroke of brilliance.

Evy was the only one sick, and she doesn’t weigh much. Plus, she seemed to be feeling better already (if looking very sleepy and not screaming quite as much equals better, anyhow). So, what if I took everybody else to the gym and pushed Evy in the stroller while we ran? And then, I could meet Shaun in town afterwards, and he could take us ALL on a date somewhere with yummy food I didn’t have to cook.

(It’s amazing what passes as a stroke of brilliance in your own mind when you’re desperate to get out of your house).

The first part of my plan really was pretty inspired. It was a gorgeous, balmy day for a run, and Evy loved riding in the front of the stroller and feeling the breeze in her face as she people (and dog) watched from her prime perch. And the run itself did wonders to clear my head and mend my frayed nerves (endorphins, baby!). Plus, I got to spend time with my friend, Lindsay, who definitely has the gift of encouragement.

I felt like a new (and much less homicidal) woman when we got done. (It might be argued that the endorphins from that run are at least partially responsible for what I did next). So, I called my husband and asked where he wanted to take all 6 of his dates.

It is testament to what a sweetheart that man is that he didn’t say, “Can we please just get pizza and go home? I mean, we ARE talking 5 children under 8 here, babe.”

Instead, he started suggesting places like Cheddar’s and TGIFridays and Olive Garden.

A) We’re not usually that in to chain restaurants, but if you’re going to sit down for a meal with five squirmy children, then they’d better have crayons and coloring sheets (and many of the more unique places we like do not)

B) We have historically done pretty well as a family of 7 in sit-down restaurants. Depending on their level of hyperness, the older kids usually acquit themselves somewhat admirably. No food is thrown. No plates are broken. There isn’t too much screeching. They even keep their audible bodily functions to a minimum (the ones that assault your olfactory senses are a different story).

ANYhoo, for some reason the only thing that jumped out at me was Olive Garden’s salad and breadsticks.

Which, of course, launched one of those shoulder angel vs. shoulder demon moments, except mine were Common Sense vs. Pollyana.

Good ol’ CS was saying, “Woman, you can’t go to Olive Garden on date night with 5 small children. This town LOVES Olive Garden. There’s going to be a 3 hour and 5 minute wait to begin with. And then, you’re going to have to wrangle twins while attempting to feed them things that involve red sauce and slippery noodles and grease. Not to mention the fact that Ezra has asked you where y’all are going to dinner at least 17 times in the last 2 minutes. Do you really think this is his best night for this?”

But Pollyana fired back with: “Oh hush up, Common Sense. Haven’t you seen those Olive Garden commercials that say, ‘When you’re here, you’re family?’ There’s always like 12 people sitting at the table in those commercials. I mean, granted, all of them are adults who know not to attempt to eat their steaming spaghetti by face-planting in it. But still. The kids will LOVE it. And besides, it’s only 5:55. It won’t be that crowded yet. And Evy’s so sleepy, she won’t be a problem at all. Plus, Nola loves bread, and they bring you baskets upon baskets of that. And Ezra’s just being spirited. You don’t want to break his spirit, do you? It will be FINE.”

Thing is, Common Sense and I are usually likethis. But I blame being cooped up all day with the never-ending loop of activity insanity + the running endorphins for the fact that I said, “Well, of all of those, Olive Garden sounds the best to me. So, let’s try that.”

And I blame my husband for being too nice that he said yes.

The truth is that is really wasn’t THAT bad.

I mean, yes,  Evy perked up enough to make whimpery noises and want out of her seat the whole time. And Nola dropped her plastic water cup with such perfect aim that it cracked the bottom open like an egg and leaked the entire contents out in 3.6 seconds. And the bread only kept the twins interested for about 6 of the 66 minutes we were there (no need to read any significance into those specific numbers in triplicate).  And Ezra’s spastic movements were responsible for many a, “Sit STILL,” hiss from me, his daddy, or, sometimes, both of us in perfect unison. And, after, glugging down several cups each of chocolate milk and nibbling at the bread, the three oldest didn’t touch their spaghetti (it is, in fact, still residing hopefully in our refrigerator in its who-in-the-world-thought-this-thing-was-okay-to-put-spaghetti-sauce-in takeout boxes). Oh, and I’m pretty sure they had to bring in a professional cleaning crew before they could seat the next table.

But other than that? It was great!

At some point, I said, “Well, it’s less of a fiasco than it could have been,” as I fished Nola’s hand out of my Chicken Scampi (again).

And Shaun, who had clearly been distracted by wrestling Evy into her high chair (again), said, “Yeah, I know. It’s pretty bad.”

It felt a little like adding insult to injury when we analyzed the head-scratchingly high bill after finally straggling out the door (under the scrutiny of dozens of curious eyes) with our crew and discovered that the we had been charged $5 for kid drinks that the menu had promised us were included in the already exorbitant $6 kids’ meal price (we usually just split an entree between all the kids but figured that the treat drinks + side of grapes would be a source of distraction + bribery for good behavior).

My theory? The waitress saw this gaggle of humanity sprawling out across her table and figured that she’d better add her own “tip” because she probably wasn’t getting one out of a man who had three weddings and, obviously, a lot of braces to pay for in his future.

We were too tired to bother with correcting it.

But I can tell you this—we learned a valuable lesson that night: (are you ready? because it’s pretty profound) Breadsticks work in a pinch when you just have to have a swordfight at the dinner table.

No, but seriously. I cannot even begin to imagine attempting such a foolhardy venture with anyone else by my side but this guy. He can hold a baby while wiping a toddler’s nose and cutting the 6-year-old’s meat about as well as any Mama I know (and THAT is a compliment, indeed). 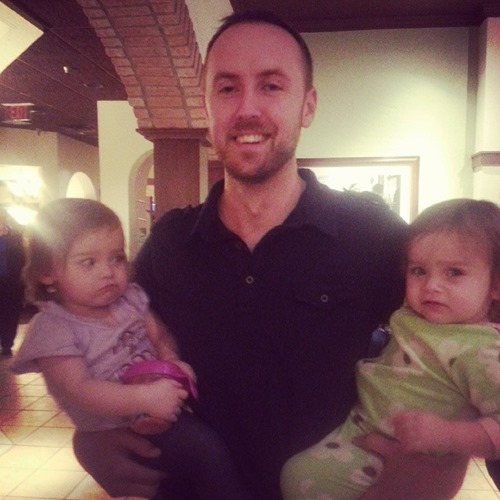 {Nola in purple; Evy in green; This is Shaun’s expression BEFORE we sat down to eat; I wish I’d had the presence of mind to take a picture of our table afterwards, but I’m guessing you can understand why I didn’t}

Which brings me to a fun idea. I thought it might be entertaining (especially now that you know the back story) to have a little contest for the photo above.

Just leave me a comment with how you would caption this photo of Shaun and the twins, and then I will pick a winner who will get TEN free entries into our current MOMbassadors giveaway.

P.S. Have YOU ever temporarily lost your mind and taken your children somewhere to eat that they had no business being? How did that go?