The last few weeks have been busy. Like BIZ-ZY. (Because misspelling and capitalizing it conveys my point so much better). I feel like I say that a lot, and I probably do. After all, we are in an incredibly busy season of life. The fact that we have five small children, two of whom are involved in soccer at the moment, and we are required by some unspoken law to, like, feed them multiple times every.single.day (insert eye roll) would be enough to keep us hopping most of the time.

But throw baby showers and spring break and house projects and rental house repairs and trips to visit family and extra work for Shaun into the mix, on top of the usual gym classes, blogging, home schooling, full time jobs, church, and—oh yeah—the constant food-making, and things get a bit out of hand. (P.S. I did a fun interview with Kelli of Eat Pray Read Love a little while ago about how I don’t really do it all if you want to check it out).

The week before last, Shaun was slammed. Last week, I was (okay, he was too) because I can’t just throw a baby shower. Oh no, I have to clean out and organize my refrigerator, my pantry, my breakfast nook…even my Tupperware drawers, for crying out loud. I have to replant my flower beds and spray paint everything in sight and sew new pillows and hang wall art and sort through all my kids’ clothes. What does any of this have to do with baby showers, you ask? Um, nothing, as far as I can tell. But between that whole advent of spring business (doesn’t sunshine just make you want to scrub things?) and the fact that having people over always gets me in a frenzy of unrelated but much-needed activity, things have been cuh-razy up in here.

The shower went great (I’ll show you pictures soon), but by 6 PM Saturday evening, I was done. Like “I’m going to lie on the couch and rest my eyes for just a sec and keep an ear out for the twins crying while I wait for Shaun and the older kids to get home…whoa! Did I fall asleep? They’re already home”…DONE.

So, Sunday morning, we woke up and kind of said, “Hi, remember me?” all around, and as Shaun and I sat on the couch mustering the energy to bathe and dress five children for church, we looked at each other and said, “What if we did some sort of family day today since we’ve all been passing in the night and running ourselves ragged?”

Less than an hour later, we were on the road to Dallas loaded up with snacks and toys and the double-stroller. 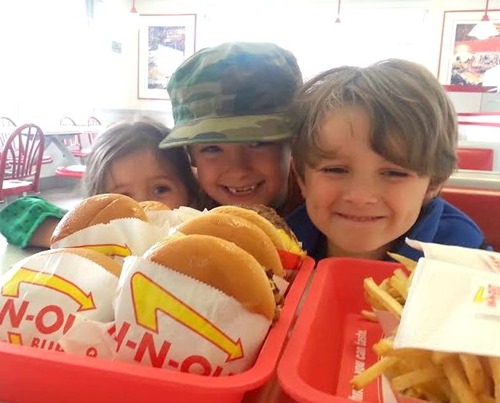 In-n-Out Burger! We only recently (and by recently, I mean 3 years ago) got these in Texas, and I hadn’t been in 11 years (since a visit to one in California), so we made a beeline for it when we saw a sign for one around lunchtime.

Honestly, it wasn’t as yummy as I remember, and Shaun said the Dallas version didn’t measure up to California’s standards, but it got our bellies full.

The best part , though (and the part that I am KICKING myself for not having a picture of), is that, as we were all piling out the door to leave, the person coming in the door said, “ABBIE!”

I looked up and saw a face that was so familiar, but because of being taken by surprise and having zero context for it, I just stared, dazed, for a second. And then it came to me just as she said, “Hey, it’s Emily from 52 Mantels!” Emily and I have been blogging buddies for over two years now, but we have never met in real life. She lives in Dallas, so there’s that, but otherwise, the odds of our running into each other on that day at that time are so stinkin’ slim. It was awesome! When I finally managed to express to Shaun that I’d literally never met her in person, he jut stared at me and said, “Wow. That’s crazy.” 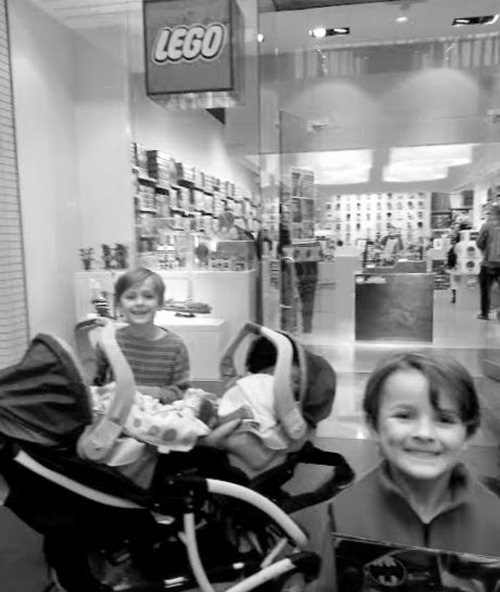 Do you think they’re maybe a wee bit excited to be there?

After the boys had found something big to share, and Della had instantly picked out the girliest LEGO product ever  (a mini princess castle), we went to my version of the LEGO store: Anthropologie.

Sadly, my phone battery died before we even got out of the car at the mall (that’s what happens when your phone gets lost in the midst of shower preparations, and then you spontaneously run off to Dallas without having a chance to charge it), so I kept having to borrow Shaun’s phone to document everything. I wish I’d grabbed it and snapped some pics of that Anthro store because they had outdone themselves. There was a life sized  elephant (okay, maybe more like baby life sized, but still) made out of some sort of plastic-y scale thingies (technical jargon, right there) that was just too rad.

But not nearly as rad as the fact that my husband wrangled kids while I spent 45 minutes rooting through the clearance racks and trying things on.

Here’s what I wore to Dallas. 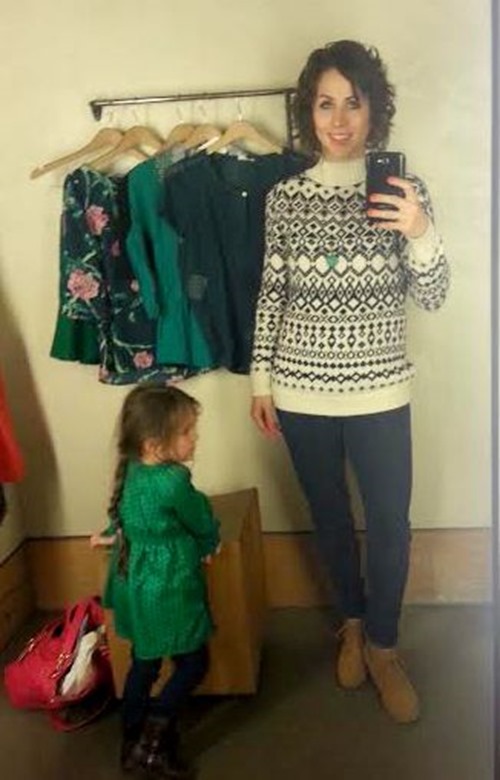 (A sweater, jeans, and boots because, even though it was March 23rd in Texas, it was 55 degrees and windy)

And here’s what I tried on:

Wanna guess what (if anything) I actually came home with? You’ll find out if you were actually right on Wednesday.

After Northpark, we headed to Ikea. 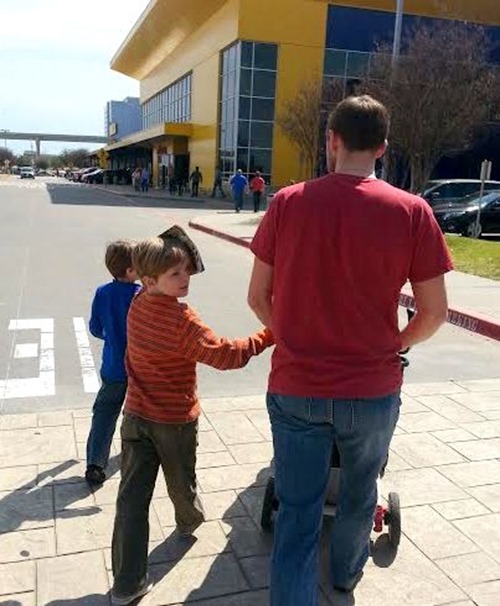 This was only maybe the 6th time that I’ve ever been to Ikea, and we had never used their childcare, so I was kind of excited to be able to shop while the kids played.

However. Apparently going to Ikea on a random Sunday afternoon is akin to doing your Christmas shopping on Christmas Eve. Everybody, their dog, their cat, and their goldfish was there. Which means that we got waitlisted for childcare. The first girl told us 15-20 minutes.

So, of course, we got ice cream. 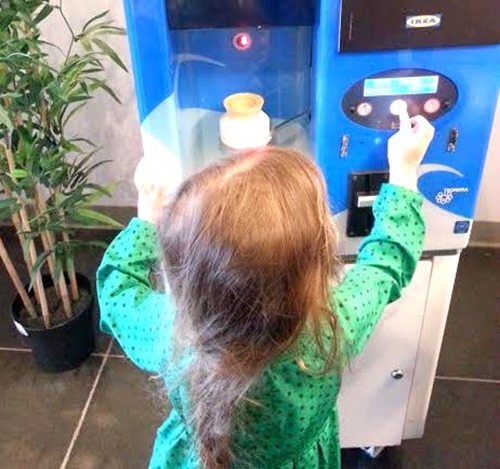 And then we tortured our little sisters with our ice cream. 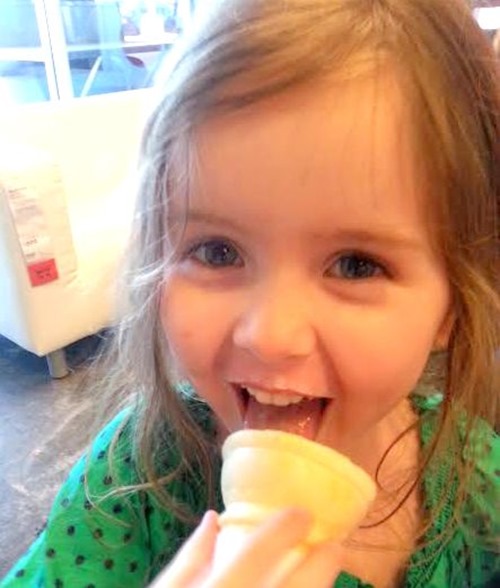 {After seeing this and the above pictures, I promptly French braided Della’s hair; it was a mess} 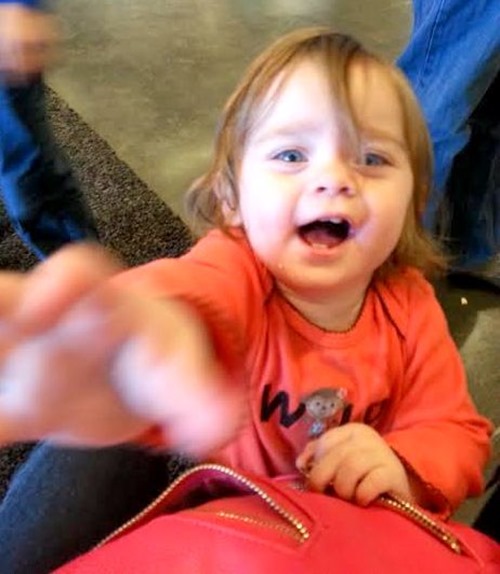 {“Mama! Della has ice cream and she keeps dribbling it on the floor all around me but won’t give me a bite!”}

The ice cream venture killed about 10 minutes. Then a series of field trips to the bathroom ate up another 10 (at least).

And still they hadn’t called our name.

So, the boys perused their complementary Lego magazines. 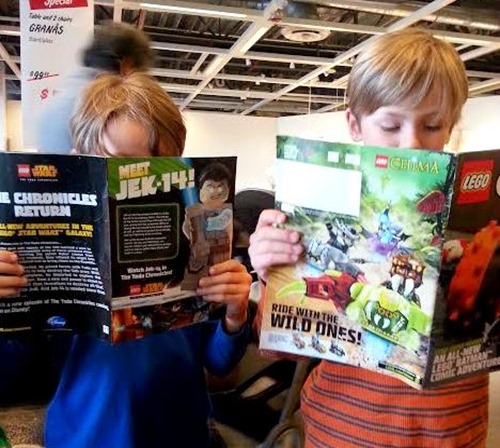 And I changed poopy diapers.

By this point, we had spent at least half an hour distracting 5 children just so three of them could have the privilege of entering Smaland.

So, I went back to the check-in desk to see if we’d somehow managed to miss our name being called. The girl shuffled through all the paperwork and informed me that 8 children were in line ahead of ours, so we were looking at another half hour of waiting.

Ain’t nobody got time for that. So we set forth with our brood, creating a mini roadblock everywhere we went. And let me just tell you: we were there for an hour and a half because, hello, it’s Ikea and you can’t get out of there fast, even if you try (I heard a lady loudly complaining to the air about how irritated she was that there wasn’t a shortcut to the checkout because she had been “tired for the last five MILES!”), and during that 90 minutes, various names were called on the intercom to come to Smaland either to deposit or pick up their children.

But ours never was.

Which was fine. Because they had tunnels to wriggle through in the kids’ bedroom displays. 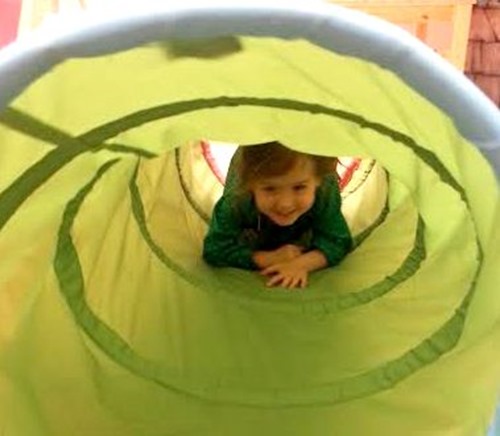 Honestly, this picture represents maybe 5 minutes of our 90 minute trek from top to bottom, and even though the kids do remarkably well with stores after many, many  epic trips to Walmart and Sam’s with me, they were pretty sick of it by the end, and the twins were worn slap out, while still refusing to nap in their stroller.

We made it out alive, though,  and immediately did a GPS search for the nearest park so the kids could run off their pent up energy.

This is what we came up with: 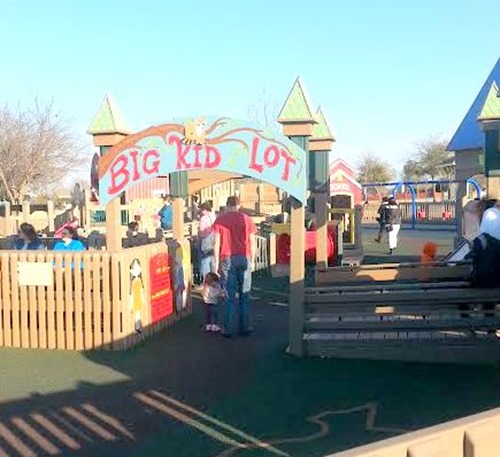 {This is Hope Park in Frisco, Texas. Can you spot Shaun and Nola?}

Seriously. This park was the coolest kids’ hangout that I have ever seen. 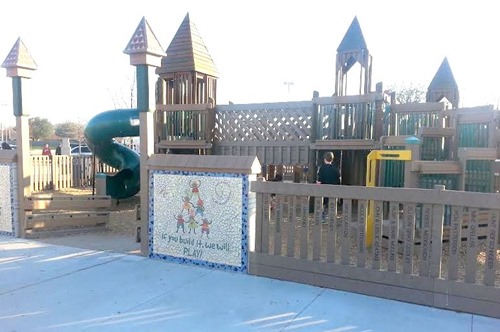 It was HUGE, with multiple sections and everything from every type of swing imaginable to makeshift pianos and pipe drums. Not to mention myriads of slides and benches and pavilions and…Sigh. It was kid heaven and the perfect end to an enjoyable day ( just don’t ask Shaun’s honest opinion of those 45 minutes in Anthro and the last 20 minutes or so of Ikea : 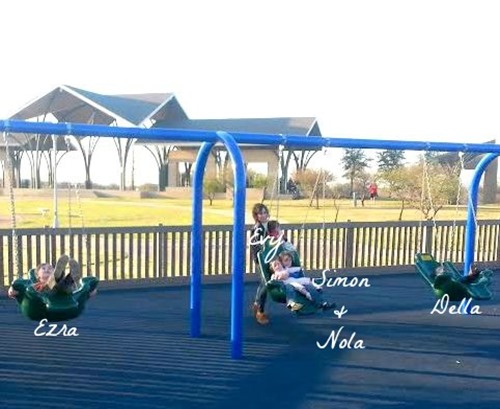 {In case you’ve ever wondered how to get cardio exercise while pushing kids on a swing, try running from one swing to the next while holding a baby!}

We capped off the day with a trip to a local frozen custard shop (it was delicious!) and watching Frozen in the car on the way home (well, the kids did, while Shaun and I sat in the front and tried to recreate this hilarious video).

Want to know the best part? We got home a little before 10, dumped the kids in bed, and then got in bed by 10:15 ourselves. After a solid week of mild sleep deprivation, getting a solid 8 hours was just plain glorious!

And now you’re officially caught up on the events of our spontaneous Sunday foray into the big city. Do y’all ever just take off for the day and do something unexpected? We don’t usually, and I have to admit that I almost chickened out because I was tired, but I’m so glad Shaun stuck to his guns. Our family needed it.

What’s your equivalent of the LEGO store? Mine is definitely Anthro, even though I’ve only ever bought a few articles of clothing there ever, but my runner-up would definitely be Paper Source or any other pretty stationery store.

Any guesses on what I bought at Anthro? You might be surprised.

9 thoughts on “A spontaneous trip to the Big D”