On Monday, I promised that I would reveal what I’d bought at Anthropologie on our spontaneous Dallas trip, and I mentioned that you might be surprised. Honestly, I was talking less about the specific items I chose and more about the quantity of them.

I’ve only ever set foot in an Anthropologie a dozen times or so, and of those dozen times, I’ve only ever bought an article of clothing (and always only one) maaaaaaybe 4 times (including this dress, which was totally my husband’s “fault”).

This time, though, I was armed with a wad of cash that I’ve been hoarding from selling items on our local swap and shop. For some reason, I’m willing to pay more for things I really want from a store I love when I’ve “earned” the money, and I have it in hand (I rarely use cash for anything).

If you recall, these were the items I took with me into the dressing room. 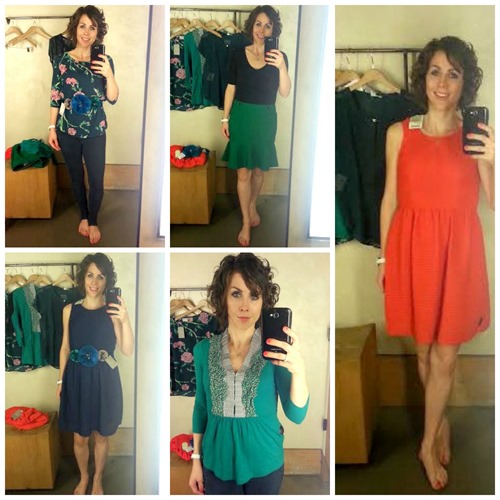 Both the red and the blue dresses were the same, and I wanted to love them, but, although it’s hard to see in the pics, they were covered in a swirly ruffly design on the fabric, which didn’t do too many favors to my already wide-ish torso (I’m not bashing myself; my bone structure just isn’t narrow through my rib cage).

But everything else I loved.

Here’s how it broke down:

Throw in a plate for $8, and I wiped out my swap and shop stash, with one dollar to spare. Now, that’s precision spending right there.

Did I pay more than I normally would? Definitely. Especially  that floral shirt. My fingers kind of faltered when I typed 39.99. For one shirt. But I loved it, and I had brought that money specifically for a trip to Anthropologie and told myself ahead of time that if I had enough to buy something that really caught my eye, I wouldn’t guilt myself over it.

{It’s debatable whether I actually listened to myself since I just wrote a whole paragraph justifying the money I spent : )}

ANYHOO, in the spirit of my pink pants {3 ways}, floral shirt {3 ways}, and white dress {3 ways} posts, I thought it might be fun to style that fun, flippy green skirt 3 different ways, using only the pieces I bought at Anthro (plus shoes I already own).

And so, I give you first… 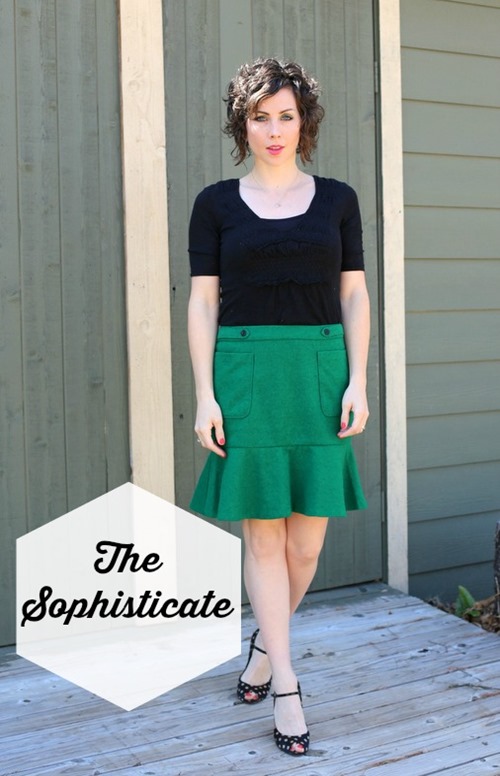 I can see wearing this option to a bridal shower or even a business meeting. 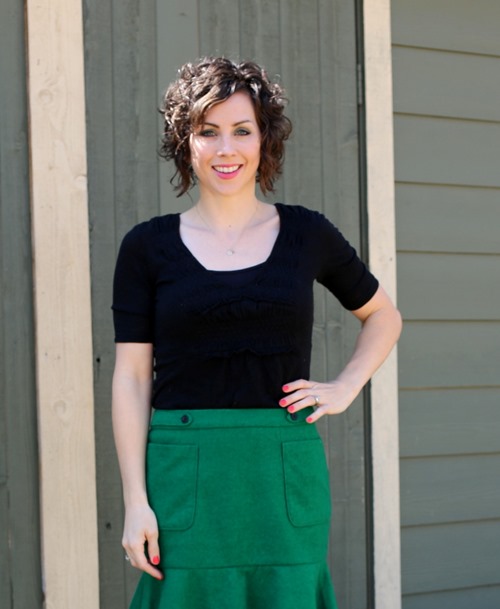 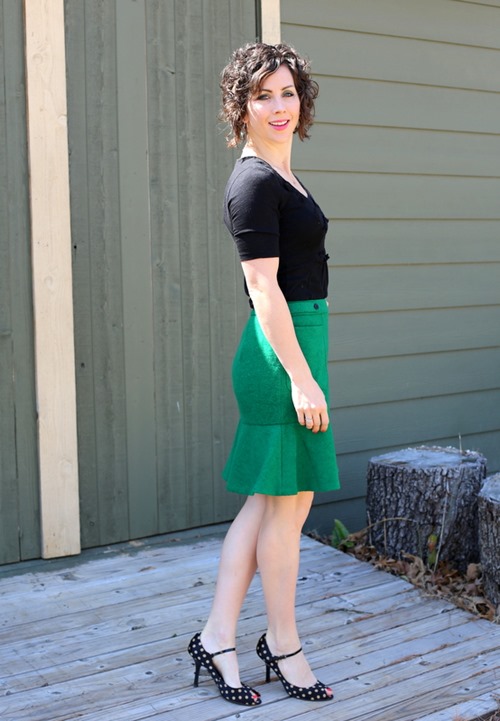 I especially love the playful touch the polka dot heels give the look. 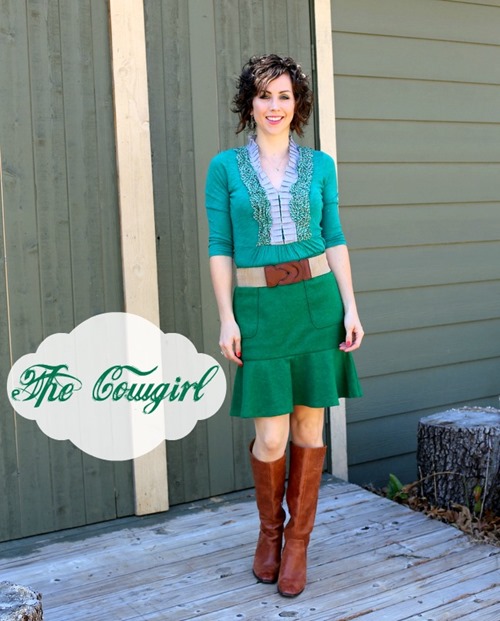 Both this shirt and the black one from above actually have a  slightly loose and flowy silhouette on the bottom, which doesn’t exactly lend itself to sleek tucking in, but with a belt and boots, I thought the puckering at the waistline actually worked pretty well with the casual, cowgirl-esque vibe. I would wear this one to church or for a dinner out with girlfriends. 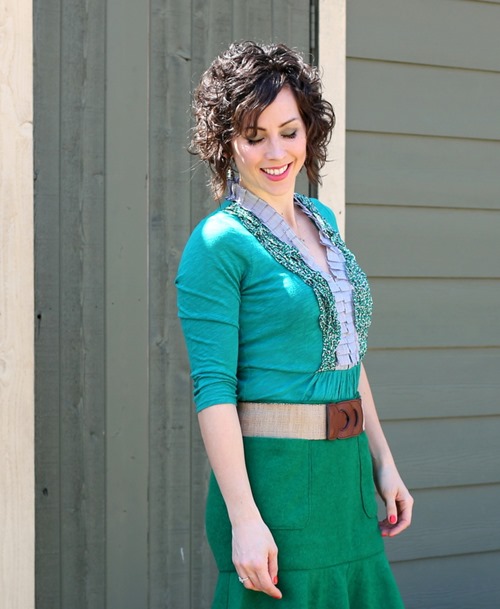 And last, we have… 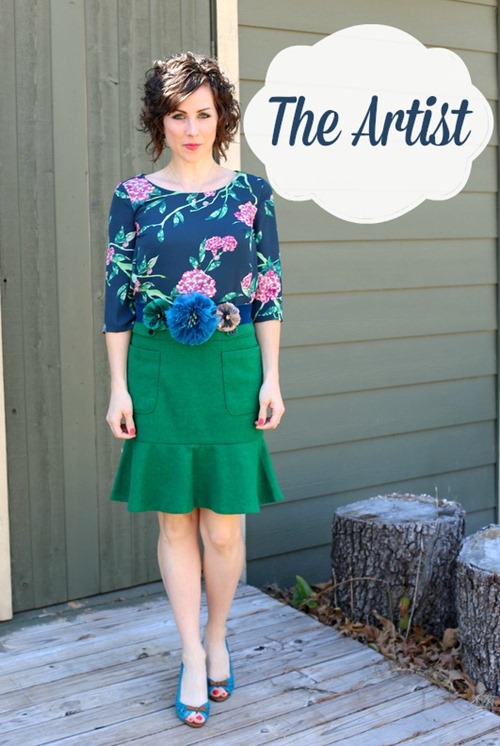 Did I mention I love this shirt? Shockingly enough, so does my prints-averse husband (okay, maybe he doesn’t love it, but he expressed surprised approval without my prompting, which is a pretty big deal for him). He was less enthused about my floral belt, but I’m choosing to ignore that one because I absolutely adore it. 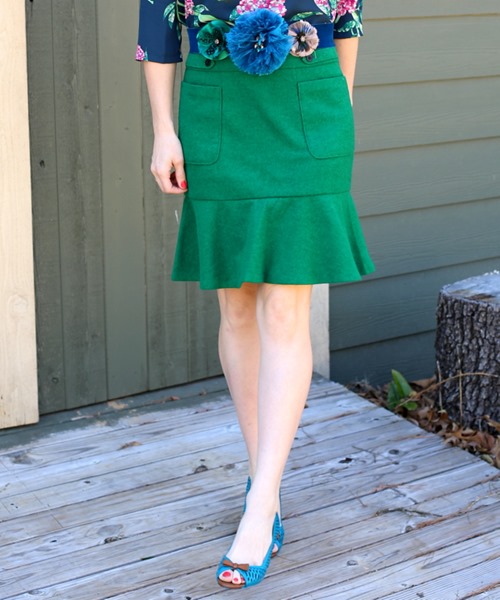 I would wear this version on date night (I  guess I’d have to lose the belt, huh?) if we were going somewhere fancy or maybe to a wedding. 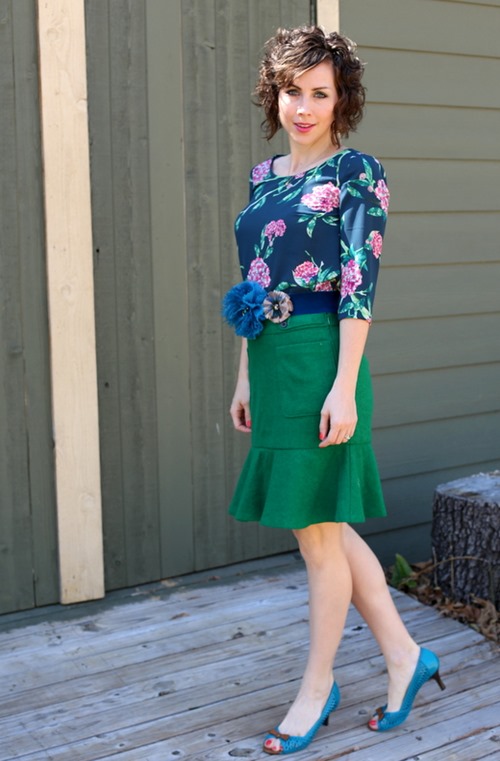 And there you have it, folks! 3 different ways to wear one green skirt (obviously, I haven’t gotten over my emerald color crush yet).

Did you have a favorite of the three? {I’m torn between the last two}.

Also, do you find yourself willing to pay more when you’ve already designated cash that you earned specifically for shopping? I don’t know why, but there’s just something mentally freeing to me when I can separate out a portion of money as “mine only.” I still love a good bargain, but it doesn’t seem as imperative when I’m not spending my husband’s money on it.