We have a local Facebook Swap and Shop that’s actually quite good. The people that run it are a wee bit militant about the rules, but, really, that’s a good thing because it makes everybody a little jumpy that they’re going to get kicked off the forum and miss out on some killer deals.

It’s not perfect, certainly, and sometimes wonky stuff happens (I’m still mourning the loss of an amazing deal on some Leapsters for my kids due to a random—or maybe not so much—deletion of a post I was first in line for). But considering that I started selling in earnest on it last week and am 6 for 7 at my full asking price with zero no-shows, I’m going to say it’s a better use of my time than Craigslist.

Last Thursday, I posted this chair to FB and IG, noting that I was taking pictures to sell it but was having second thoughts. 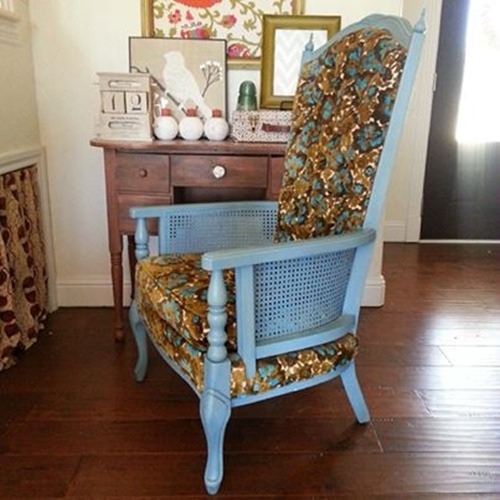 I love that chair. But after two years of shuffling it from room to room in my house without finding a good fit, I had to face the truth: my home wasn’t itshome, and it was just taking up valuable space. Several of you expressed outrage that I would part with it, and one of you even volunteered to have a relative who lives close to me pick it up after you paid me via Pay Pal.

Alas, it was too late. I posted it to the swap and shop, and it sold in 4 minutes (I’m thinking I miiiiiiiight have priced it a bit low) with a long line of “nexts” almost immediately.

The lady that bought it private messaged me arranging to meet and asking if I had anything else to sell. I said yes, took a few pictures to send her, then went on with my day. The next day, we were supposed to meet when I was in town running errands and hanging out with a friend, but she couldn’t because she had met another woman to get more things, and her truck was full. That revelation cemented my suspicion that the woman buying my chair was a professional junker, probably with a shop or some sort of resale business.

I told her that I could meet later, but it would probably be much later since I didn’t want to curtail my time with my friend, Lindsay, just to run off and do a furniture meet. Her response? “That’s fine. I’m a night owl.” It was settled.

But then I texted her around 9:45 PM and told her when I’d be headed her way, and she responded that she was tired and didn’t feel well, and could we possibly meet the next day? I had already told her that was a no-go because I was experiencing something extremely rare–a van full of furniture instead of children. Its usual occupants would return the next day, so the furniture had to go. I told her I would deliver the items to her (it wasn’t too far out of my way).

And so, at 10:30 at night, I drove to a complete stranger’s house, the directions to which went something like: “Last house on the left at the bottom of the hill” (I texted Lindsay: “Does this sound like the directions to a serial killer’s house, or is that just me?”).

As I pulled up in her driveway, I could see that my suspicions had been correct (the junking suspicions, NOT the serial killer ones!). There were old this and thats scattered across her driveway, and her cars were parked outside a sizable garage, which told me that it too was full of loot.

The lady approached and introduced herself: “Ann Drew.” (Say that out loud).

I unloaded my stuff and started to browse through the items laid out on the driveway, my pulse quickening as I realized that this was junker’s paradise! Ann picked up on my interest immediately and proceeded to give me the grand tour of several outbuildings, all of which were overflowing with every type of vintage doodad and furniture imaginable. Before long, I was picking up an item here or there and asking, “How much for this one?”

I am in purge mode at the house, so I forced myself to limit my questions to things I was already looking for to fill a space or a specific purpose. It took considerable willpower to ignore oodles of amazing…stuff, but I managed, despite Ann’s repeated teases of: “Don’t you just loooooove this? Can’t you just see it in your house?” Sometimes, the answer was, “Yes and yes.” But I stood strong.

Here’s the craziest part, though (well, almost the craziest part; that one’s coming): whenever it occurred to me to ask if she had something specific, she always did—usually in triplicate. It was a bit mind blowing just how.much.junk this lady had accumulated.

Of course, my mind didn’t actually completely blow up until Ann had me walk down the road to a cute little manufactured building on their property where she had “some designer purses.”

And then she opened the door to reveal a 900 square foot space crammed to the gills with every possible rendition of Dooney and Bourke and Coach bags. Every color. Every style. Every year. My mouth sagged open, and my nostrils flared as they inhaled the smell of expensive leather. We stood in that temple of temptation for at least an hour minutes, chatting about her various purse purchases as she attempted to sell me on one model after another. Thing is: I’m just not into designer purses. In fact, I kind of have a thing against them, so it wasn’t nearly as torturous as a room full of beautiful chairs or fabric that I wanted to buy but didn’t need would have been. Two things did tempt me, though. A vintage, pristine condition Dooney and Bourke bag that was utterly unique and much less ostentatiously emblazoned with the company logo than the rest…and a pair of fire engine red, 4 inch wedge Coach wellie ankle boots. They had patent leather tassels, y’all. They. were. gorgeous. And crazy impractical. And $150.

Obviously, I passed. But only after I tried them on. And choked back a little sob.

The entire time we were standing there chatting, I couldn’t shake the feeling that I had somehow managed to stumble down a junking rabbit hole, never to resurface, and when Ann said something about owning 300 designer purses (that she intended to sell but just hadn’t gotten around to yet), I had to literally pinch myself to make sure I wasn’t actually at the mercy of my thrifting-obsessed subconscious.

Turns out, I was awake. Which is great since I have yet to wake up and find out that I’ve managed to score a bunch of awesome deals in my sleep.

Ultimately, I don’t actually know if I’d call all of the deals that I scored “awesome” (because they weren’t the rock bottom prices I can find at my Goodwill),  but I did find several things I’ve been looking for at very good prices, and that makes me happy.

So, what did I actually buy? 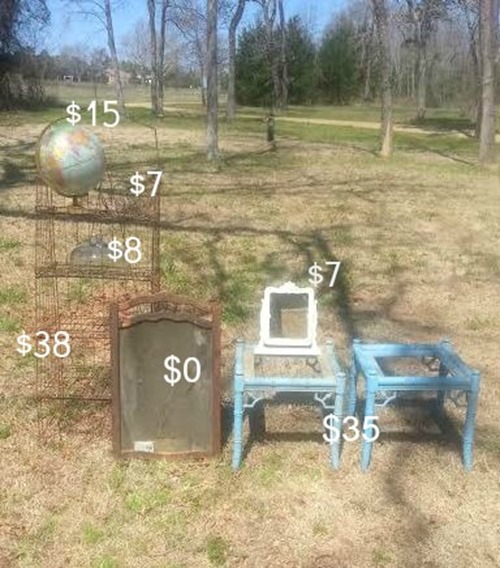 {Pardon my not-so-great cell phone pics; I’m organizing the contents of a hutch that I sold and have yet to find my traditional camera battery charger} 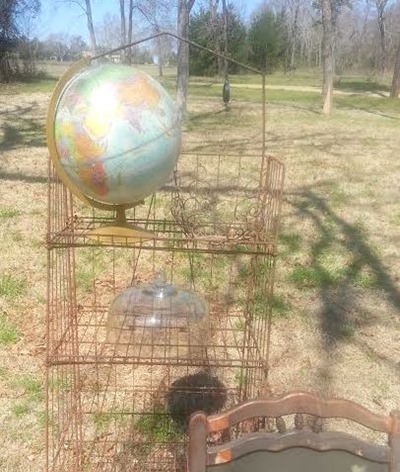 {The globe was perfectly ordinary, but it was in pristine condition, and this same ordinary globe on Amazon costs $40 new}

Large wire shelf (I’m going to paint it and use it for storage in my craft room—probably my favorite find of the night): $38

Heavy, nice quality glass cake plate dome (I have 4 cake plates and nothing to cover them with): $8

Decorative wire basket (this one was an unnecessary splurge, but I carried it around the whole time and still wanted it at the end, so I went for it): $7

Heavy decorative mirror (she originally wanted “only $10” because it needs cleaning up something fierce but then said I could have it for free since I’d delivered the furniture to her house): $0 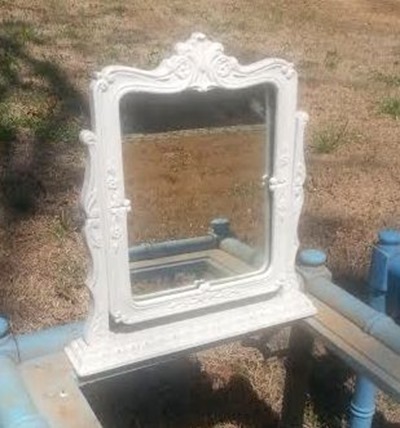 {Love the filigreed details; it actually has a really nice weight to it = one of my better “deals”) 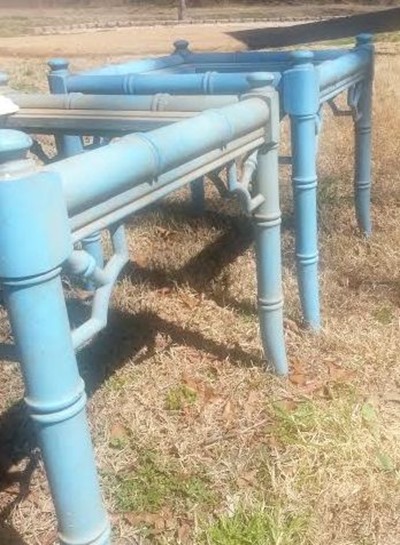 {Love the scrolly details of the legs and can’t wait to paint them gold; she couldn’t find the glass at the time, so I’ve got to go back for that. Darn :)}

What I actually paid her after she bought the furniture I’d brought for her: $40.

So…$40 for things I really wanted/needed and some unnecessary items cleared out of my house? I’m calling it a win.

All told, I spent about 2 1/2 very enjoyable, slightly weird hours down the junking rabbit hole, and I emerged with nary a designer purse. I call that winning too!

I will say, though, that as nice (if eccentric) as Ann was, I still had one more brief “serial killer” moment when, after we had loaded the van and everything was settled but payment, she said, “Okay, I need to go inside. I’ll be right back.” And walked off with no other explanation.

I stood there shivering in her driveway at 1 AM thinking, “All right, this is it. She’s coming back with her shotgun.”

And then she reemerged with a pen and a pad of paper to write everything down. Phew! That was close.

So, that, my friends, is how this thrifting Alice managed to find her way to junking Wonderland.

Have you ever fallen down an unexpected junking rabbit hole? Any great scores?

Have you ever gone somewhere that made you nervous to go alone? (I promise that I would not have gone if I had felt like I was in any genuine danger, but when I stepped away from the situation and looked the location and time of day like a movie scene, I had to laugh at how easily it could translate to bizarre horror movie plot line: Young mother’s body is discovered under a pile of Coach purses with a vintage candlestick clutched in each hand).

What are your thoughts on designer purses? Would it be hard for you to be in a room full of beautiful bags at a discount and not buy anything?