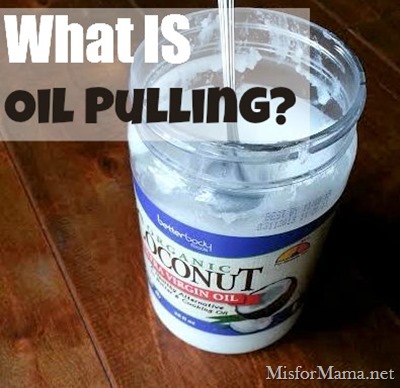 You know how I’ve mentioned my aversion to clothing trends a time or two? Well, I have that same reaction to health  trends. I’m a major skeptic when it comes to the latest “miracle cure” for this or that, and I rarely even bother to give them more than a cursory glance.

But when Mandy told me about this thing called oil pulling that had the potential to whiten your teeth, freshen your breath, and maybe, possibly even heal cavities (what??!), I was more than a little curious.

Growing up, we ate very healthily. We didn’t have a lot of money, and not infrequently, dinner was beans, sometimes with cheese, sometimes not when money was especially tight. Sure, we ate lots of other things, and we were by no means destitute, but our meals usually consisted of some sort of protein and vegetables (my gag reflex still triggers when I even think about the beets we were required to eat at least one of when they were served at dinner). We never kept candy, donuts, or soft drinks in the house and only ate them as special treats.

Unfortunately, I won the bad teeth lottery, and, despite my mom’s care with our diet and our oral hygiene, I have a row of super attractive aluminum fillings up and down my molars on my top and bottom teeth. Things got better when I got braces (straight teeth are easier to keep clean? makes sense to me!), and I didn’t have a cavity from ages 13-23.

23 was the year I had Ezra, and I don’t know why (although I blame pretty much anything wrong with my body currently on either pregnancy hormones or childbirth itself), but my cavity-proneness returned with a vengeance, and by the time I had Simon 18 months later, I was back under the dentist’s drill (shudder).

Which brings us right back to oil pulling.

When Mandy mentioned that bit about healing cavities, it sounded way too good to be true. But it also sounded like it was worth a try.

Wait, Abbie. What’s worth a try? What is this oil pulling business of which you speak?

Simply put, oil pulling involves placing between 1-3 teaspoons of high quality oil (in other words: safe for consumption) in your mouth and swishing it between all of your teeth’s surfaces for 20 minutes.

Because the theory is that the oil is the right consistency/quality of substance to travel through the plaque on your teeth and “pull” out the toxins and bacteria that have built up in your mouth and are wreaking all manner of oral havoc—everything from teeth yellowing to cavities to bad breath to pain and sensitivity. And it does this without harming or disturbing your teeth or gums.

Here’s the deal, though: I’ve been oil pulling for a little over two weeks (although I’ve missed a day here or there), and I can already see/feel the following benefits:

1. My teeth are whiter and more consistent in color. I have great oral hygiene. I floss every single night and sometimes in the morning, and I brush a minimum  of twice a day. I don’t drink coffee or tea or smoke or do any of those things that yellow your teeth.  But my teeth still tend to get yellower along my gum line. Well, they’re by no means blindingly white (yet…I’ve heard tell of some pretty impressive results with continued use), but I have noticed a more consistent, whiter tone over all. That happened after only one week.

2. My teeth are less sensitive. They are not strongly so to begin with, but I do have one spot which has been causing me pain since I started using a particular brand of toothpaste with whitening qualities. I have continued using that toothpaste since beginning oil pulling (because it’s the only one in my medicine cabinet right now), and the pain has diminished considerably.

3. One of my cavities is going away. Y’all. I’m not even lying. Not to gross you out, but I had a dark spot accompanied by a small hole at my gum line on one of my top teeth. I could catch my fingernail in the hole. Ew. And I have other spots that are similar (DARN YOU, pregnancy hormones!). That hole? It’s going away. I can no longer catch my fingernail in it but instead can simply feel a bit of roughness where the crack once was and can tell that the dark spot has diminished.

4. It seems to be helping my skin. This is another claimed benefit of oil pulling, but I’ve read less about actual results. Still, I’ve noticed fewer breakouts and an improvement in the consistency of my skin over the past few weeks, even though I wasn’t expecting or looking for it.

So, why am I writing all of this after only 2-ish weeks? Because I’ve only been doing this for 2-ish weeks, and I can already see improvements.

You better believe that I’ll be giving you an update after 6 weeks or so.

So, just in case you’re wondering what it is I actually do, here’s the nitty-gritty:

Each day (usually during the morning), I place about a tablespoon of solid state organic coconut oil (that I purchase in a large jar from Sam’s Club) in my mouth and proceed to do all sorts of facial contortions which are not good for my 31-year-old, fine-line and wrinkle prone skin as the oil melts. Not gonna lie: those first five seconds are gag-worthy. But my personality derives a sort of masochistic pleasure out of powering through the grossness, and once the oil melts, it’s all good. Or at least, it’s not too bad. If you’re especially prone to gagging, put the oil the microwave for a few seconds, and then put it in your mouth to avoid the melty/gaggy part. Also, if 20 minutes sounds like a ridiculous amount of time to keep anything in your mouth, well, I agree. If that’s all you do. But I generally pull while doing laundry or dishes or picking up in the living room, and it honestly doesn’t seem long at all. After I’m done, I rinse my mouth out with warm water and maybe brush with water if I feel any oil residue (I don’t usually). I am still flossing and brushing per usual, but I have read that some people change their brushing/flossing habits after an extended period of using oil.

Want to hear the kicker? I’ve even gotten (certain members of) my family into it, so this Sunday, for example, Shaun, Ezra, and I spent 20 minutes grunting and using hand signals to communicate, which apparently looked like so much fun that Della subsequently spent 2 minutes attempting to tell me that she had to go potty while her mouth was closed. Awesome. (Simon is willing to hold the oil in his mouth for a whopping 2 minutes if asked but he’s not completely on board this wild oil pulling train yet). 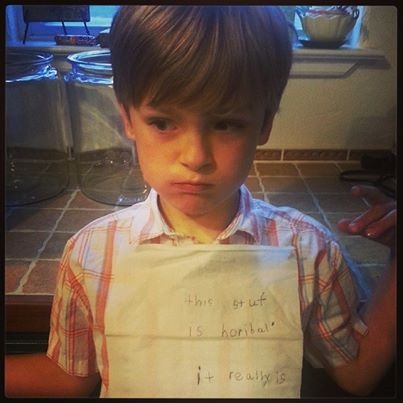 {This picture makes me laugh every time because a) Ezra wanted to do oil pulling with me b) even though I told him that he could spit it out early, he wouldn’t even consider it until I did, and c) a few minutes after he wrote this dour observation, he amended it to say, “This is  notbad at all!” So, apparently, even my 7-year-old doesn’t think that pulling is that “horibal”}

A couple of notes: if you want to join in on the craze, be sure not to swallow the oil (even though it’s totally digestible) since there’s the possibility of your body’s reabsorbing the toxins that the oil has (hopefully) removed from your mouth. Also, when you spit it out, be sure to use the trash can instead of the sink since the oil returns to its solid state at room temperature and can clog your pipes.

So, what do you think? Do I sound like a witch doctor? I would go on and on about how this is not the kind of thing I normally do or write about, but honestly, whether you think I’m nuts or not, I’m pretty happy with my results thus far.
Even if all I ever get is whiter teeth without harsh chemicals, I’m good to go.

Have you tried oil pulling? Any results?