A while back, Lamps.com contacted me to see if I might want to participate in their Lampshade Design Challenge, and I thought, “Eh, sounds like fun. Sure!”

I had something in mind for my office/craft room, which is majorly under construction at the moment, and I was intrigued by the possibility of making it a reality, starting with a blank canvas. 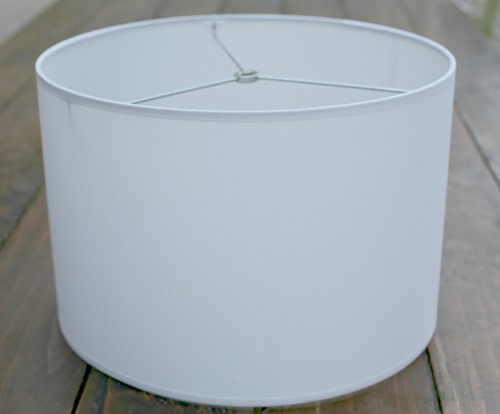 Lamps.com sent me this pristine white lampshade, and it was my job to jazz it up any way I could think of.

Here’s what I had in mind. 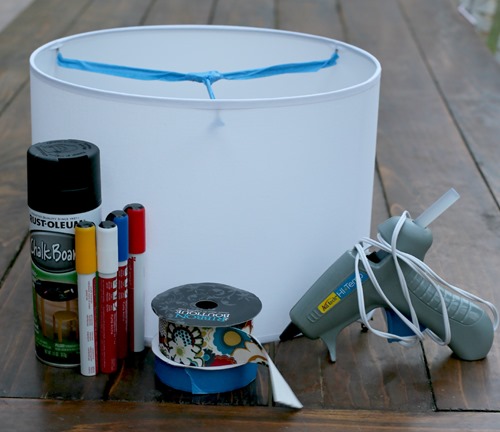 I had visions of a funky, embellished chalkboard lampshade with a meaningful message.

As you can see in the pic above, the first thing I did was to tape off the…uh…what are those metal arm thingies at the top of the shade? Anyhoo, whatever they’re called, I taped them off because I wanted them to stay silver.

Then I gave the exterior of the shade several good coats of chalkboard paint.

Once that was done, I decided that the white interior was just too stark and plain, so I covered the chalkboard painted portion with paper… 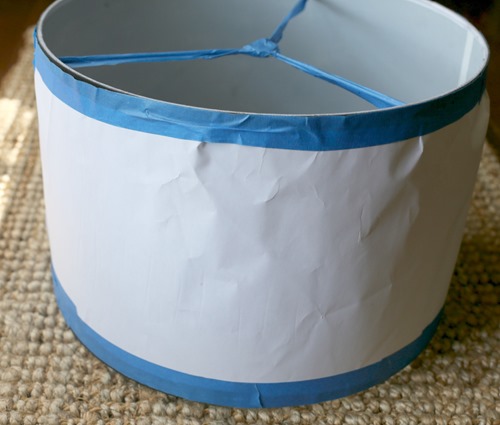 …and coated the interior with gold spray paint.

At which point I had this: 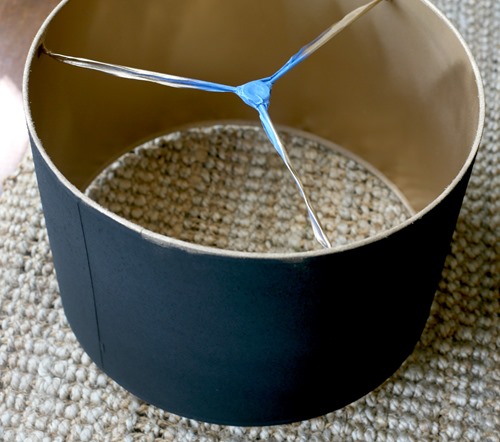 A little hot glue and several episodes of, “OW! Hot, hot hot!” later, I had given the top and bottom a nice ribbon border. 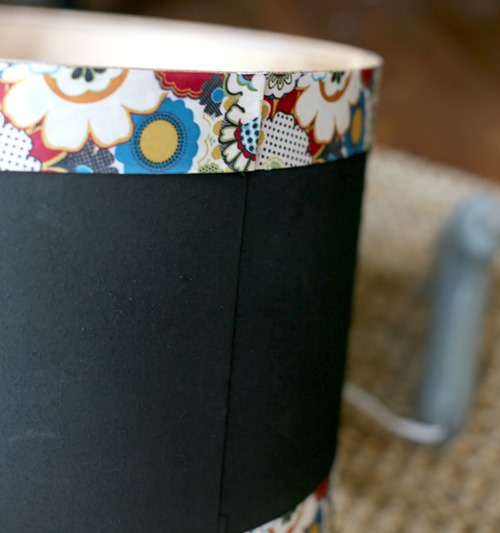 Now came the fun part. I knew I wanted to write something important that I would want to see every time I used this room. So, I grabbed my chalk paint pens and started scribbling. I would show you an in progress shot of this part, but I was honestly just trying to get. it. done and forgot all about any photographic evidence.

Also, at some point, I decided that the floral ribbon was a bit too there on its own and added another layer of ribbon—this time with a black and gold Greek key pattern.

After much tweaking (very different than twerking), I finally had everything how I had pictured it in my head.

This next few paragraphs are brough to you courtesy of: “Keepin’ it Real”—I don’t have a picture of it because, well, I didn’t want to have a picture of it, but my craft room is a total disaster. It has been the dumping ground for all unfinished projects, fabric scraps, clothes that need altering, insert-other-pile-of-randomness for months now.

So, if you see these next pristine pictures and think something like, “Gosh, with 5 small children, I don’t know how she manages to have such a clean, organized, dedicated space for her creating…”

Although I am working on it. But if I had bothered to turn my camera around to show you the other side of the room, you probably would have literally gasped at the mountain of…junk (there are other words for this) that was piled on the daybed in there. 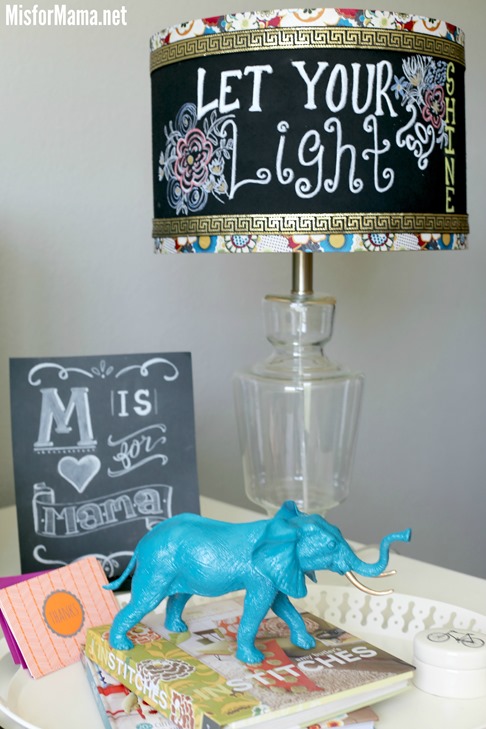 I chose the phrase, “Let your light so shine” because, well, it’s a lamp, so it made sense. 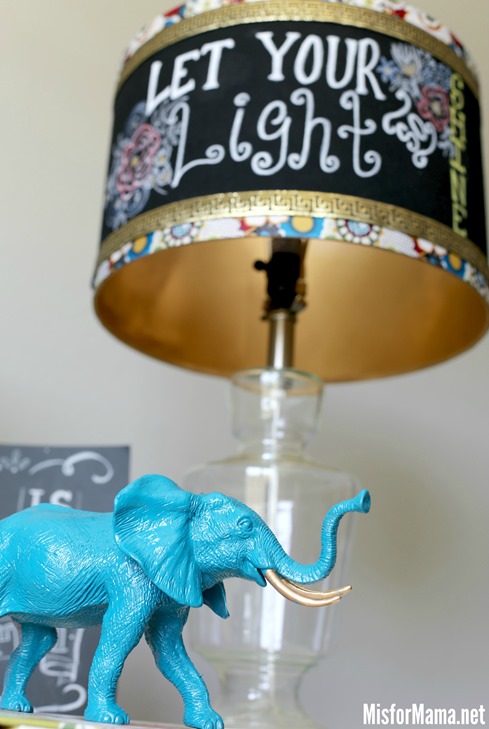 But mostly, I chose it because it’s actually the first part of Matthew 5:16, which says, “Let your light so shine before men, that they may see your good works, and glorify your Father which is in heaven.” 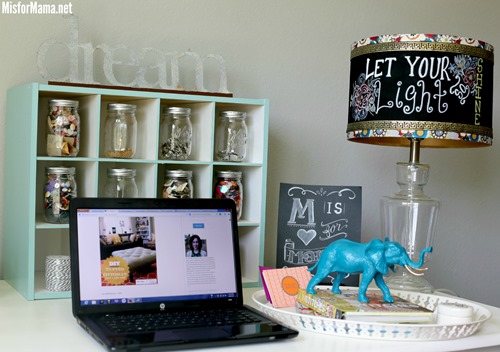 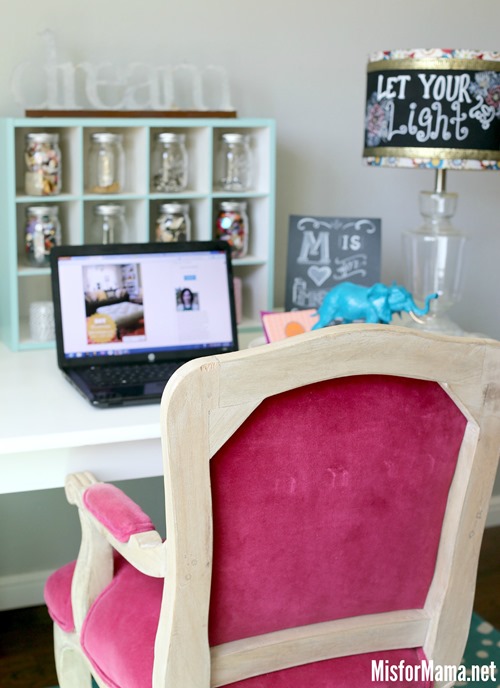 This is truly my heart’s desire. 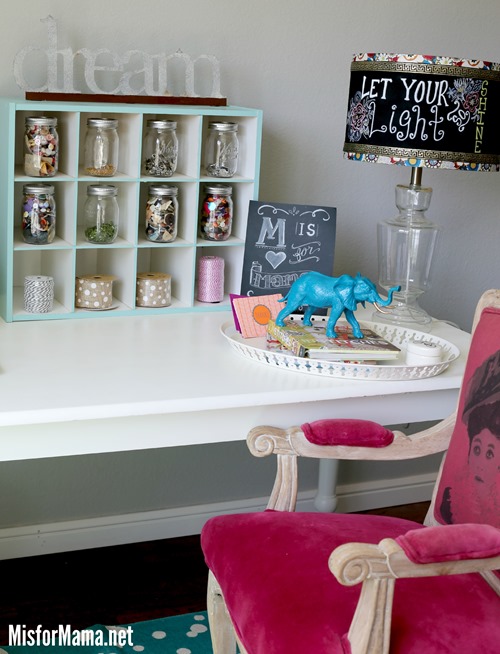 Of course, it’s not even my light to begin with. Any light I shine is simply a reflection of the Son.

Either way, I’m happy to have this oh-so-tangible reminder when I feel like hiding my light under a bushel of (remember “This Little Light of Mine” from VBS when you were, like, four?) of grumpiness or impatience or pride.

While I was in spray-painting mode, I snagged an elephant that Della got for Christmas and gave her a bit of a glam makeover. (Make sure you read this to find out how Della reacted when she discovered my theft. It’s pretty hilarious). 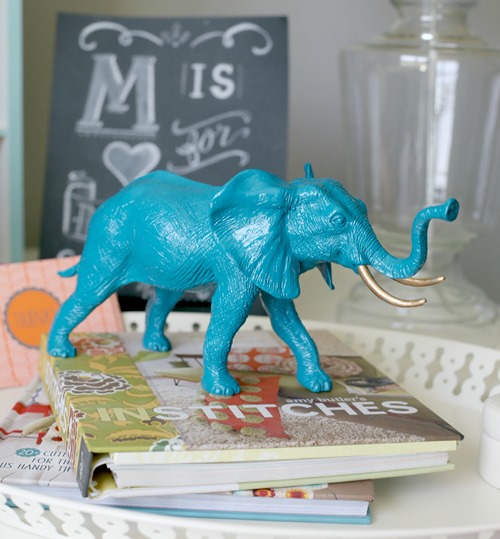 I mentioned at the beginning of the post that this little project was part of a Lampshade Design Challenge.

Which means that, if my design receives the most votes, both you and I can win gift certificates to buy something pretty from Lamps.com. I’ll let you guys know when the voting starts and how to do it, but in the meantime, let me leave you with this encouragement: 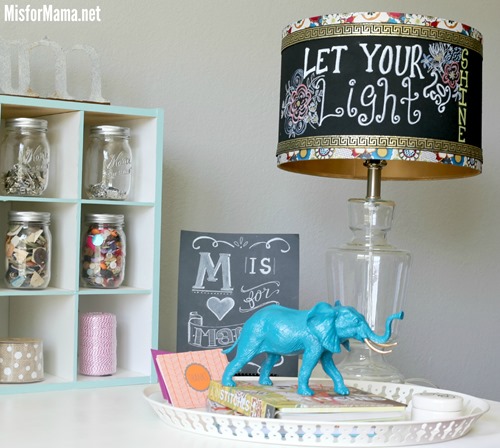 God has given you a unique and amazing light, and He’s done it so that you can reflect any glory it brings you back to Him because it is when we glorify God that we shine brightest.