At some point this past weekend, my friends, Lindsay and Amy, and I were all rhapsodizing about the joys of a kid-free girls’ weekend while we sat outside in a shaded courtyard, people-watching, enjoying the breeze, and sucking down Viennese iced chocolate milk. And I said something about the last girls’ weekend away that I could remember taking being when I was pregnant with Della. 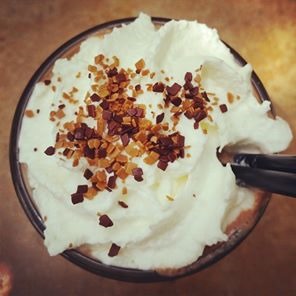 I’ve thought about that claim several times since because I kept telling myself that surely I’ve done a just-girls weekend more than twice in the last five years. But I don’t actually think I have. I mean, yes, I’ve been to blogging conferences and, yes, there’s the every-now-and-then dinner out with girlfriends. But entire weekends away with practically no agenda are few and far between, which is probably at least a small part of why Friday and Saturday were so darn enjoyable.

{Breakfast tacos at 1 PM after a run…sounds good to me!}

We ate, we slept (although not that much), we ran, we got doused in colored corn starch, we ate some more, and we shopped. Oh, and we talked. And talked. And talked. That was probably my favorite part. Good, fun, meaningful conversation with two other women who are also mothers, also Jesus followers, also a bit bemused at the looming inevitability of age 32 when we still don’t feel qualified to carry the title of adult. 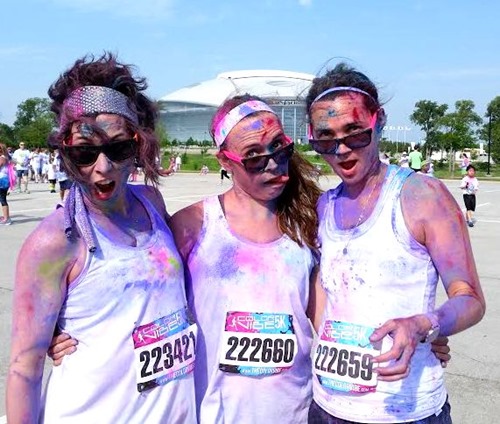 {I wonder why in the world we wouldn’t think we’re qualified for adulthood? Side note: this is one of the least attractive pictures of me on record, I think, and I kind of love it}

Friday afternoon, we set off for Dallas in my swagger wagon (read: Honda Odyssey) and about 10 minutes from our hotel, the PT Cruiser we were idling behind in traffic made a weird grinding noise and let off a puff of smoke. At least, that’s what Amy and I adamantly told Lindsay who was convinced it was our van doing the grinding and the puffing.

Turns out, we should have listened to Lindsay. After freshening up in the hotel room, we got back in the van to go to dinner, and the grinding and the puffing happened again, with no PT Cruiser in sight to blame it on. And thus, commenced an hour-long session of calls to our respective husbands and various other car-savvy relatives in an attempt to diagnose poor Ophelia Odyssey’s ailments. At one point, we were very grateful that the hotel was only a 2 minute walk from several restaurants (our closest option? Bikinis. OY!)and a 10 minute walk from the Color Vibe run site, which just so happened to be Rangers Ballpark because it looked very much like we wouldn’t be driving anywhere and would have to find a way to get the van home.

After multiple attempts to catch the elusive grind/puff on video (which always resulted in our getting distracted mere seconds before it would do it again), we finally managed to internet-diagnose a likely sounding cause for the problem. As soon as that happened, we trekked across the parking lot to Texas Land and Cattle for dinner (Bikinis was never discussed as an option, strangely enough).

By this point, it was 9 PM, and hunger was winning over any interest in being able to get back the next day. But once our bellies were full, we returned to the van quandary, which was greatly helped by the arrival of Lindsay’s mechanic uncle who confirmed the internet hunch that the van’s air-conditioning was the culprit and that the van was still drivable. Praise Jesus!

The next morning, we got ready to run the Arlington Color Vibe and performed the classic girls’ weekend exchange of remembered and forgotten items. Lindsay had toothpaste, which I needed. Amy had dry shampoo, which Lindsay needed. She also just so happened to have Echinacea tea, which I happily sipped after waking up with congestion and a throat so sore I briefly wondered if I’d contracted strep. 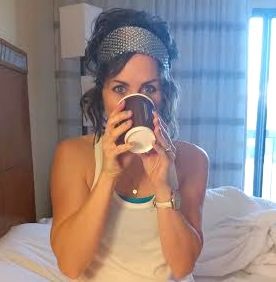 Amy was definitely the most prepared of any of us, but I seem to remember her using my hair dryer (yes, the hotel had one), so at least I contributed something.

With about an hour to spare before the race, we walked to the ballpark where we discovered ear-splittingly loud music (I guess I am an adult after all, if that’s the first thing I noticed) and lots of other white clad folks wandering around the vast parking lot. 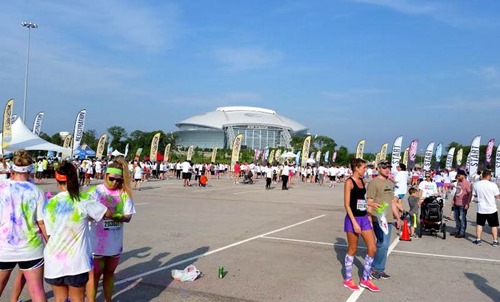 There was great excitement… 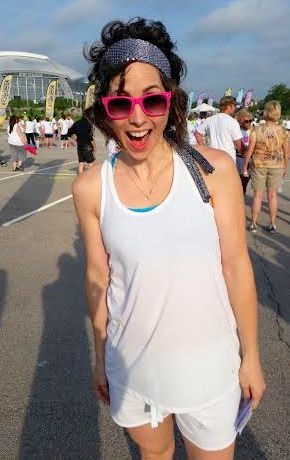 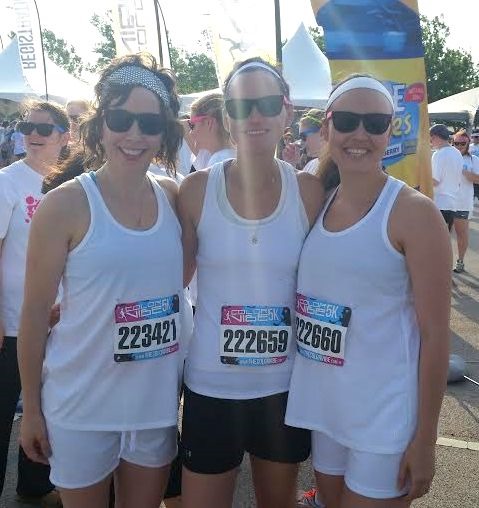 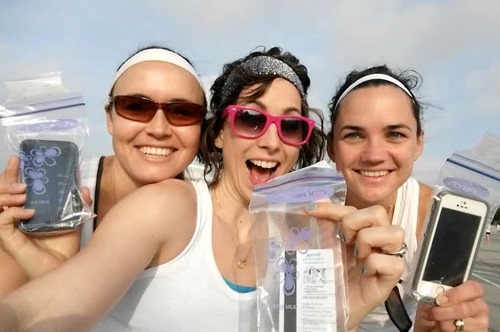 {How do you keep your phones safe and sound from all the color? Why, you put them in breast milk bags, of course!}

And even more posing with random {hardcore} strangers… 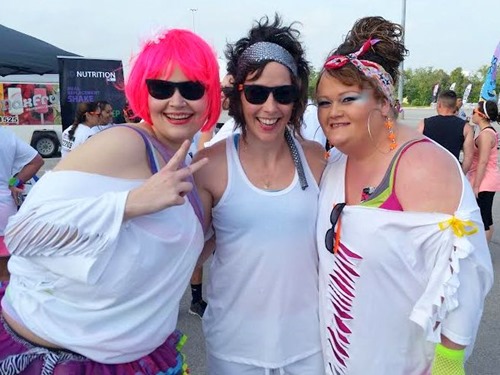 {This is Ashley and Summer, and I admire their dedication} 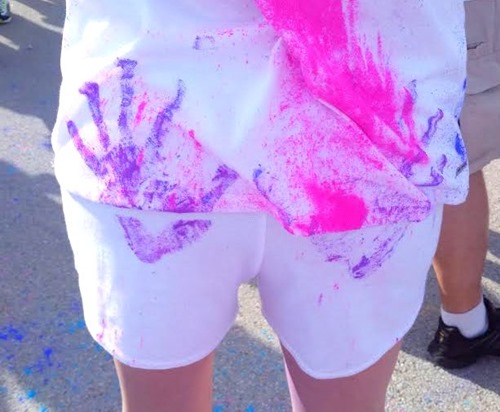 And this happened too. 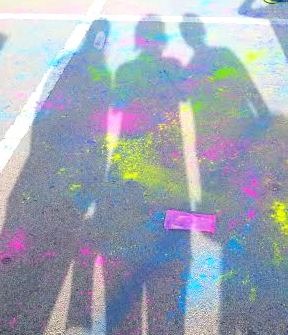 And this next shot is the closet I will ever get to being a cheerleader. 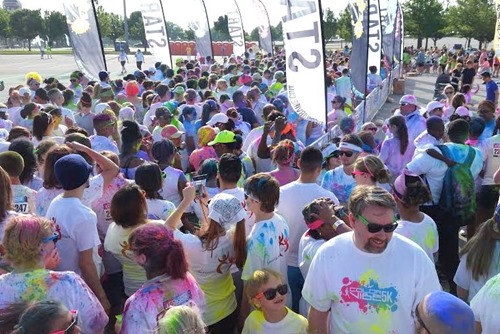 {I had to stand on Amy’s and Lindsay’s hands to get high enough to take this; it was exhilarating, I tell you}

Oh, and in case you’re wondering about our running form… 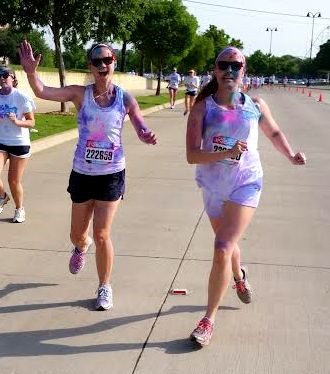 We all laughed so hard when we saw this picture, simply because it would be hard to try for a more awkward running picture and get something this good. Amy even forbade me from posting unless I explained that this was her response to my urging them to be wild and crazy as they ran a 5K. (I think we considered titling this one, “Hello, my name is Amy, and this is my attempt at being a free spirit”).

We were not there to run a fast race, but I think our final time was still only 27 minutes, so it wasn’t too shabby. Of course, I sprinted for the very last 50 meters and was still slowing my heart rate when we came upon a fitness booth where they were having  a contest to see how many burpees you can do in one minute. 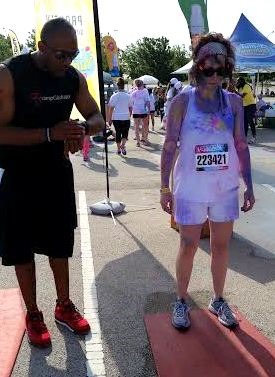 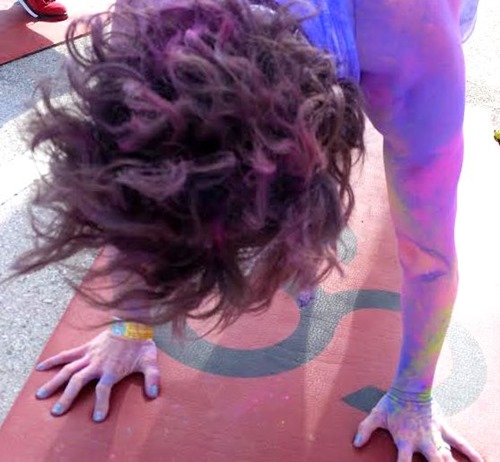 {Lindsay was determined to get “action shots”} 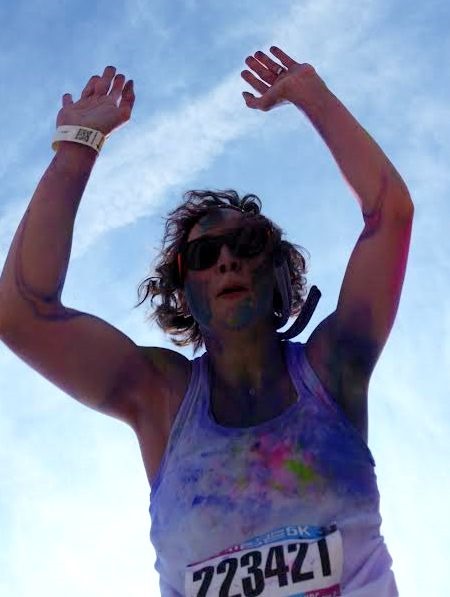 And, boy, did she {since we’re on the theme of unflattering pictures of me}. 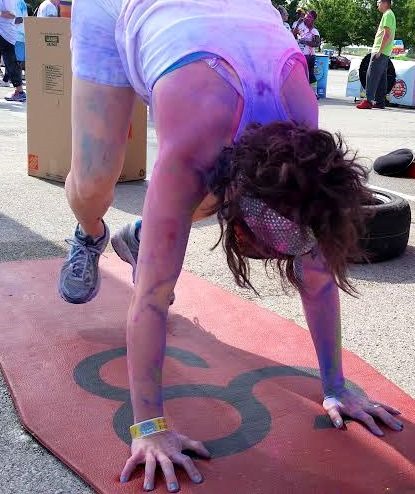 So, how many did I do in a minute? 28. I held the record for like two seconds until someone came in a few minutes behind me and did 30. It made me want to go back for another go at it, but by that point, my legs felt quivery and food sounded much better than bragging rights.

Honestly, while the run itself was only so-so, everything before and after it was a blast. 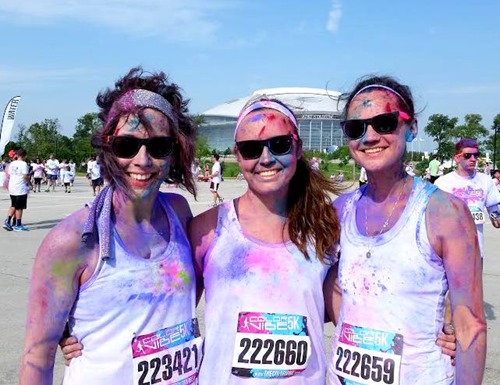 In case you’re wondering, the “after” consisted of those breakfast tacos and chocolate milk from above, an epic trip to Anthropologie (where I found an $8 shirt that made the cashier jealous), and even a very brief trip to the Nike outlet where I found those polka dot shoes I wrote about and discovered that they didn’t translate well on my feet in real life.

Honestly, it might have only been 30 hours, but it was exactly what this tired mama needed. I’m pretty sure Lindsay and Amy thought the same.

So, what about y’all? Do you make a point of girls’ weekends, or are they scarce? This weekend made me want to plan another soon to look forward to, but in all honesty, it’ll probably be another two years with this busy season in life we’re all in.

When you do get a weekend away, where do you like to go and what do you like to do? This was pretty much my idea of getaway perfection: a little exercise, a lot of good food, and multiple free hours to browse through stores I love, unearthing great deals.