1) Thank y’all so much for your sweet comments on Monday’s shelf post. I’m glad you guys thought it was as awesome as I did. But darn you all for wanting a tutorial! Just kidding. I did want to say, though, that I will do my best, but since my husband made it all sneaky-like, I won’t have much in the way of pictures, so be prepared to try to understand my convoluted written directions.

2) GOTCHA! I can definitely say that Tuesday (April Fool’s) was one of my most enjoyable blogging days to date. As the, “I totally fell for it!” comments came rolling in, I was practically chortling (just used that one in Words With Friends, so it’s fresh in my mind) with glee. I just love the fact that I received a concerned text from a friend because she hadn’t had a chance to read all the way to the end of the post. And then there were the obviously-didn’t-actually-read-it shares on FB that  went something like: “See?? I KNEW it. STOP THE OIL PULLING.” Snort. I even fooled my pastor, y’all. That was fun. Of course, now you’re expecting it, and I think it was the very fact that I’ve never done a post like that before that made it so believable, so I’ll probably never do another one (or will I?….muahahaha).

Anyhoo, thanks for playing along and being such good sports with my little prank. Y’all are rad.

In other news, last night, I watched Nola sitting in a big person chair eating Lil’ Smokies out of a big person bowl, simultaneously all nonchalant and, “Hey, look at me and bad self” and wondered when my baby morphed into a little girl.

At one point, she almost knocked the bowl off the table but stopped it and pushed it back from the edge and then resumed eating with even greater nonchalance and bad-selfness. And I almost shed a little tear for the fact that my “twinnies” (Della’s word for them) are babies no longer.

In fact, at 18 months (as of the 24th of March), I’d say they’re officially toddlers. And, although I am at a complete loss as to how I ended up with identical twin toddler girls when I am absolutely certain that they were tiny and bald and utterly helpless, like, yesterday, it doesn’t change the fact that I’ve got a couple of awfully cute little girls (babies, no more) on my hands. 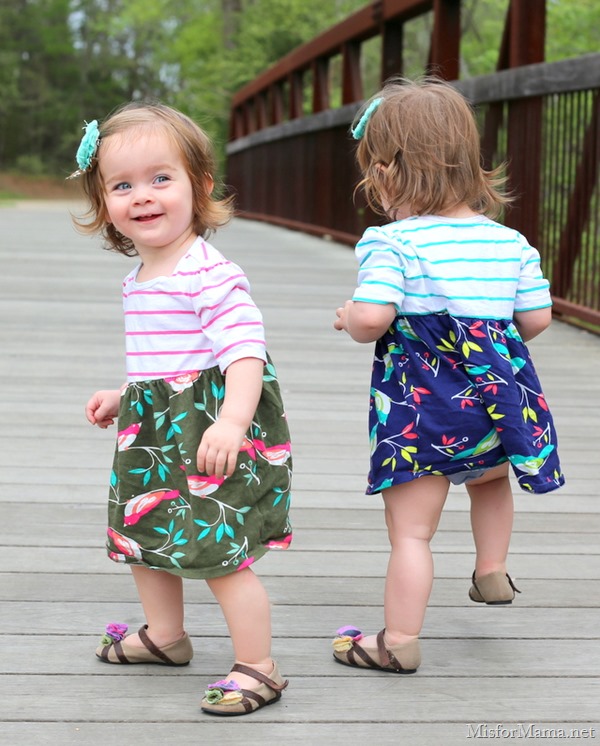 You may recognize this bridge from my Sisters post. Not only do I like the look of it, it’s basically in the back yard, so to speak, of the gym where I work, which makes it awfully convenient as photo shoot locales go.

All of these shots were taken in a whopping five minutes, both because the girls tend to yank any bows or clips out of their hair in much less time than that and also because, well, they’re two 18-month-old toddlers. Photo sessions lasting longer than 5 minutes are met with much resistance (aka: weeping and gnashing of teeth + elaborate escape attempts). Plus, I had to go teach class right after we took these pics. 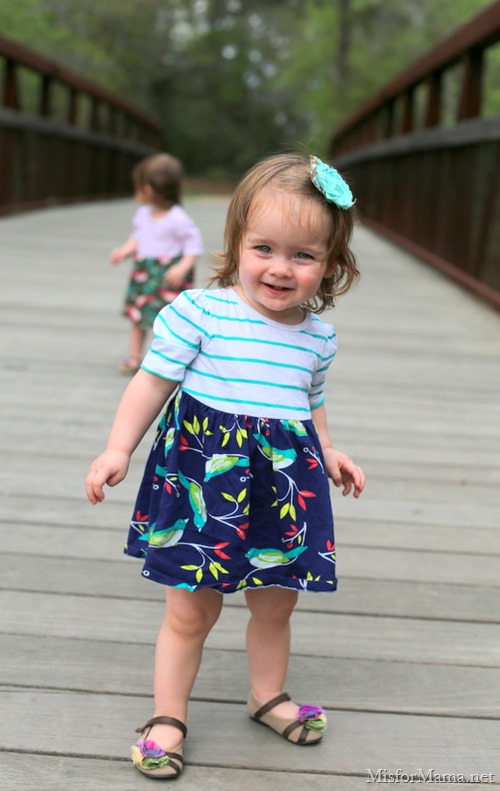 Even so, I managed to snag a few cute ones, although I’m pretty sure this may be the only one where they’re both facing me (although not both looking; that would be asking too much, apparently). 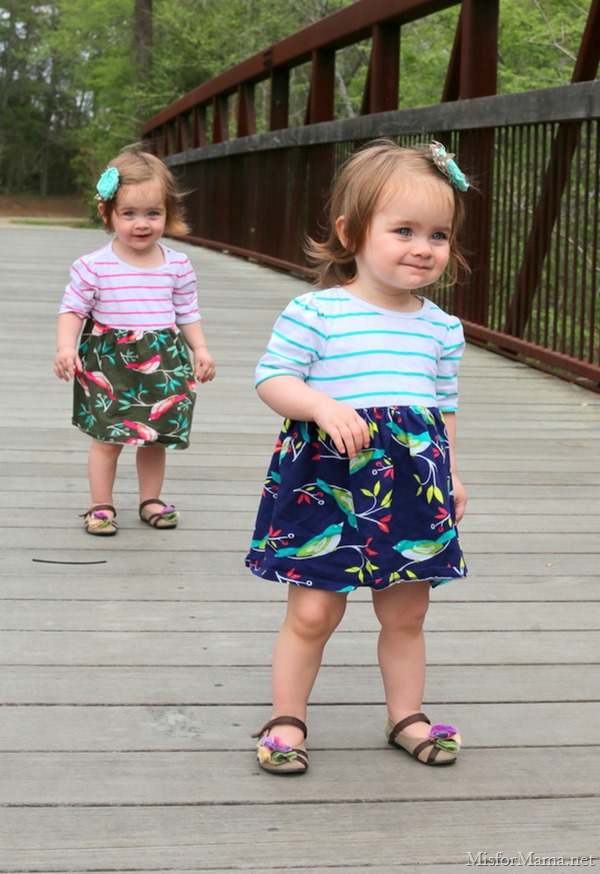 {That random black thingy by Evy’s feet? Yeah, I didn’t notice it until we were almost done}

I think I just happened to catch Nola in this pose, but she might actually be admiring/showing off her adorable Joyfolie shoes (which I received at a steeep discount for a review way back before the twins were even born). Both the twins are shoe-obsessed and will find random pairs in all shapes and sizes around the house and bring them to you and thrust a foot out with plaintive little, “Schoooo, schooooo?” requests. 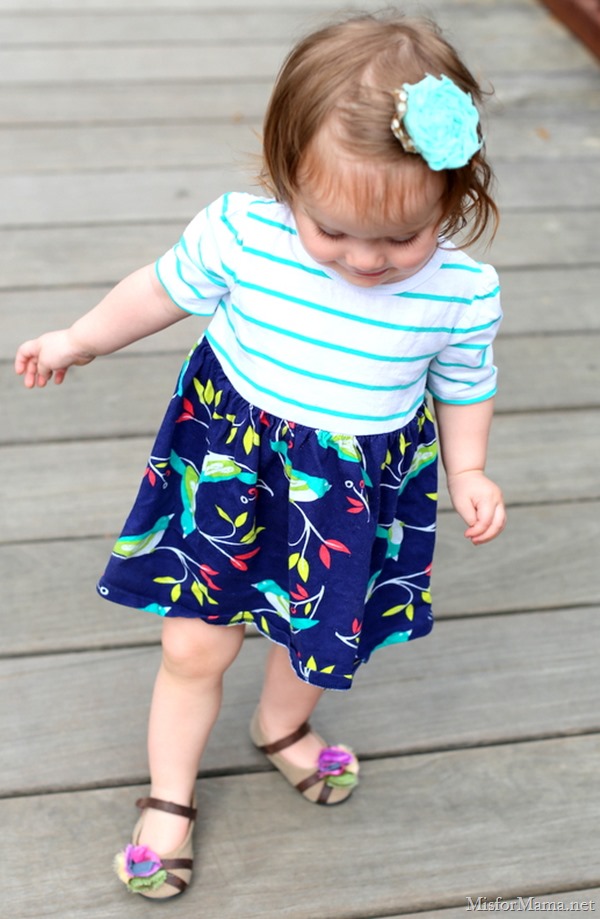 {Their dresses were a recent clearance buy from Old Navy, by the way}

For some reason, I really love this next one. They’re both just focused and in their own little adventuring world. 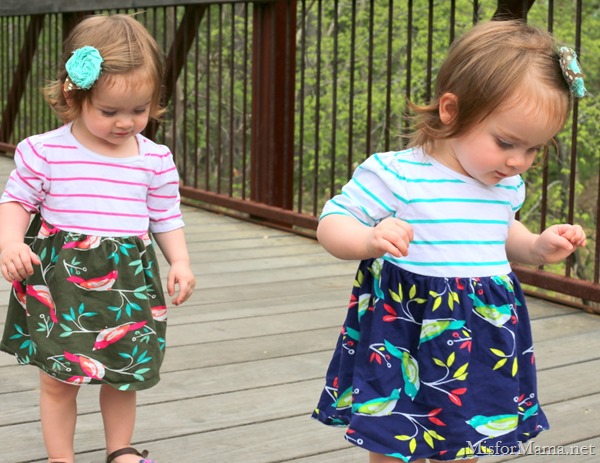 Sometimes, that’s pretty accurate, but they’re usually a bit clingier than that. Or at least one is at a time. They trade off. Fortunately, although they’re Mama’s girls (which I love), they’re also content to be carried by/played with/fussed over by their big brothers and sister, all of whom happily oblige. 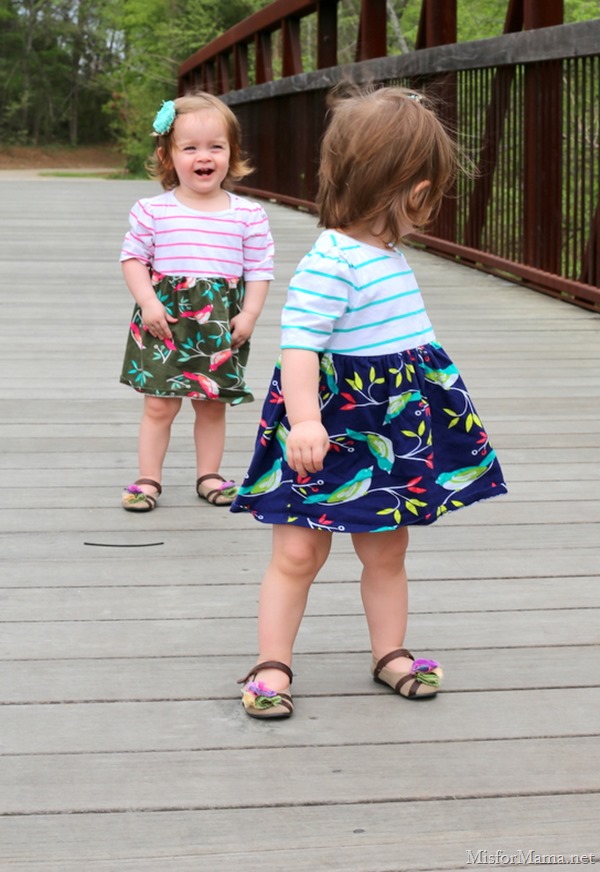 “You coming, Evy? Oh, and quit making that face, or it might freeze like that, and I would totally be the prettier one for keeps.” 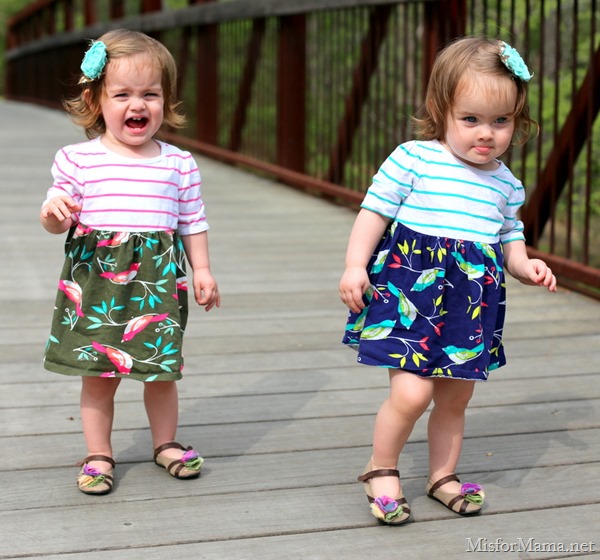 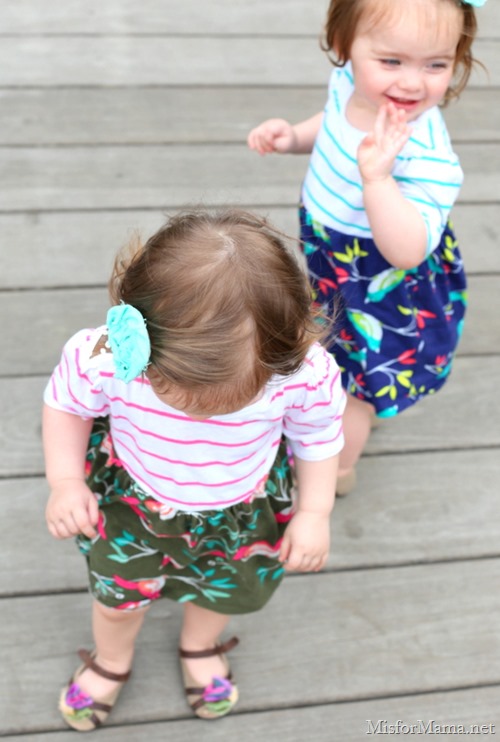 Honestly, they are pretty much the best babies toddlers (choke) imaginable. They sleep all night (in the same crib) and never make a peep at bedtime (probably because they can’t wait to get in bed and whisper secrets). They also take awesome naps during the day and wake up happy and jabbery.

They eat well (Nola, especially; I think she’s just trying to maintain that pound-ish lead she’s always had on her sister), play really well much of the time, have the sunshiniest personalities, and are very liberal with their kisses.

But for all their similarities, they are also vastly different. I’ve mentioned a few of their distinctions before, but most notable is Evy’s tendency to close her mouth primly and emote with her eyebrows and eyes, whereas Nola’s mouth is almost always open (usually because she’s shoveling food in it), and she is prone to gesticulate wildly and bounce around in her seat. Their voices, too, have become different enough that unless both are crying at the same time, I can tell who is who even from another room. Evy LOOOOOOOOVES to “draw” (I have to really stay on top of her because she seems to have a radar for markers and pencils), and Nola is big into baby dolls (she walks around most of the time with one tucked under her arm). 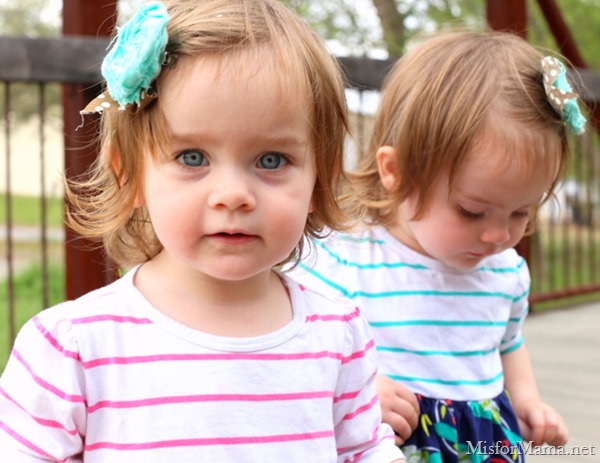 Mostly, though, they are both just huge blessings in our lives. I know I’ve said it many times before, but I will say it again: I was so shortsighted for thinking I didn’t want something just because I knew nothing about it, and it sounded hard, and I’m so glad the Lord paid me no mind. Hard, it is, sometimes, but it’s always so, so worth it.