I know I’ve left you guys hanging a bit after blabbing on about the great dinner party of 2014 (aka: the very small little shindig at my house that was a big deal to me).

If you’re following along with my Instagram updates from our travels, then you might have a pretty clear idea of what’s been distracting me from writing this post.

I did promise that it was coming.

If you saw the dinner party inspiration board, then you already knew which direction I wanted to go, and I pretty much stuck with my original vision. 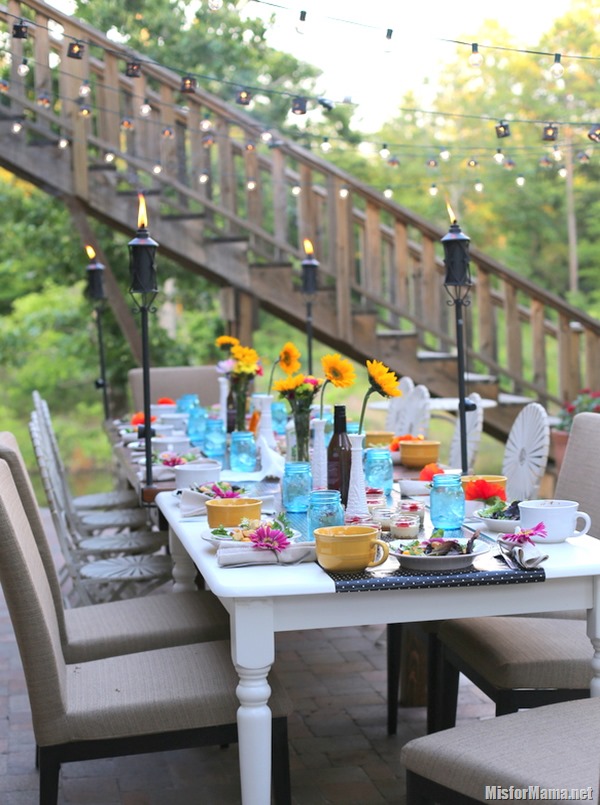 In fact, I THINK I checked off every single item on my list except for the glitter place cards (although I did order gold glitter washi tape just in case).

But instead of place cards, I decided to go with something a little more—shall we say—organic. 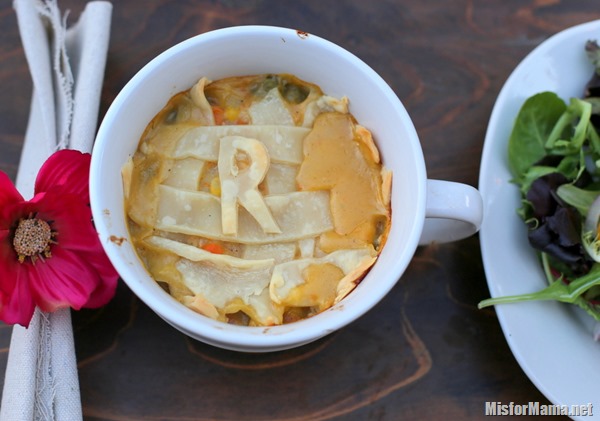 I made individual chicken pot pies (using my own recipe) for my guests and topped each with a monogrammed initial. We had some repeats, but since all the spouses were seated together, it was easy to figure out. (In case you’re wondering, I found those soup mugs at Wal-Mart for approximately $2.00 each, and even though they said nothing one way or the other about being oven safe, they worked like a charm). 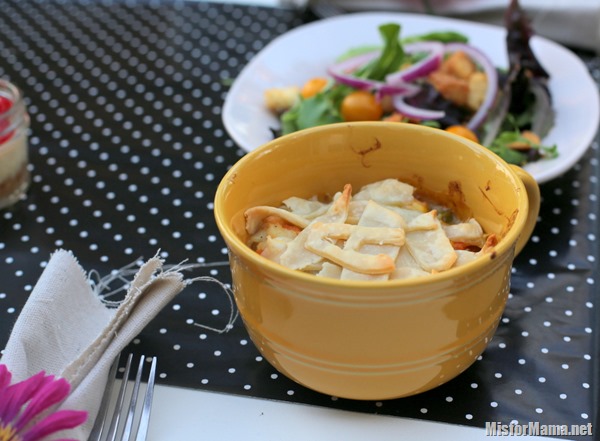 I’m not gonna lie—I  was a little proud of that particular touch. 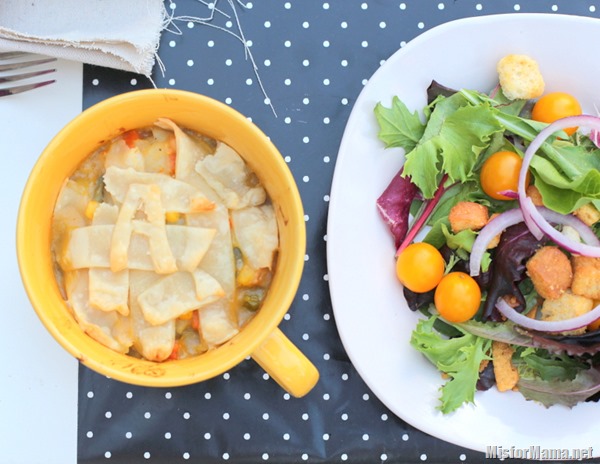 I also managed to throw together those faux flower DIY napkin ring holders that were part of the inspiration board by buying wired flowers (also from Wal-Mart) and simply clipping them to the right length with some pliers and then bending them into a ring shape. Not fancy but it did the trick and looked cute. 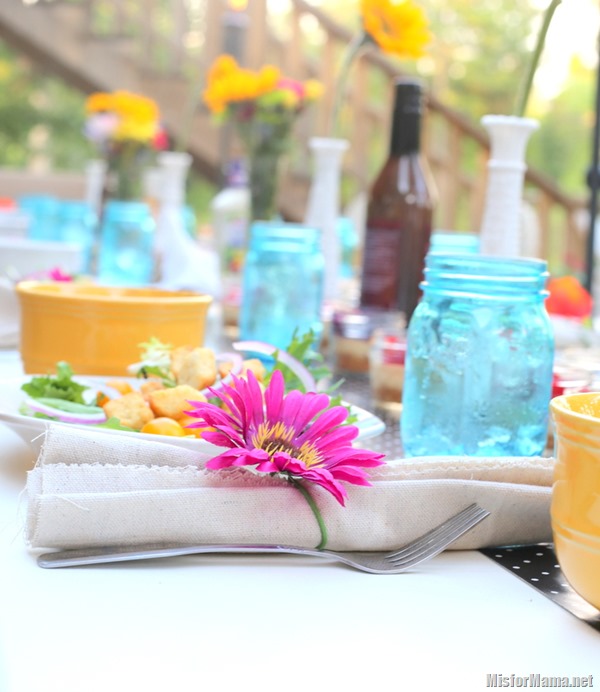 Best of all? They’re completely reusable! 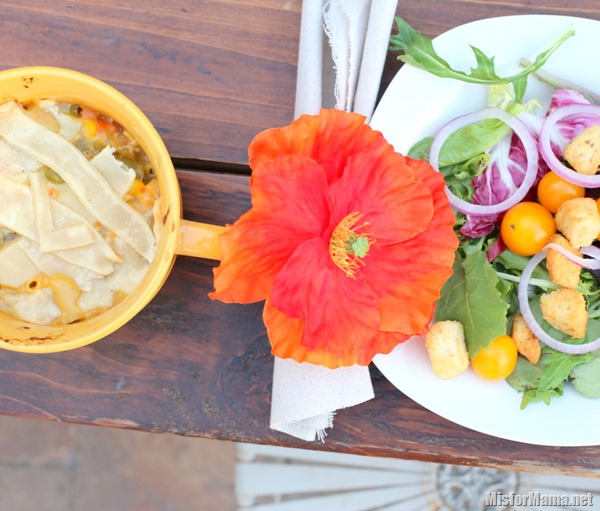 The menu consisted of the pot pies (I made the filling several days in advance and then cooked them as the guests arrived so they would be nice and hot for dinnertime), salad, cheddar garlic biscuits (which I made—well, my friend, Amy, did mostly—from a mix and which were a huge hit), and the mini cheesecakes I showed you a few weeks back.

As we were setting out the final things before we ate, my friends, Liz and Jolinda, had the brilliant idea to scatter the cheesecakes over the table to make them within easy reach of guests when they were ready for dessert and to add more pops of color. 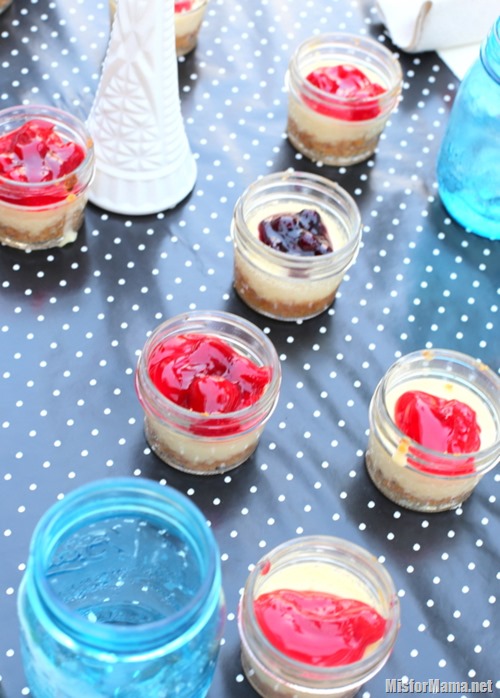 I topped them with cherry, strawberry, and blueberry pie filling so everybody could have something they liked (hopefully).

I bought my flowers from Sam’s—one giant mixed bouquet for $15 and then one $6 bunch of mini-sunflowers. 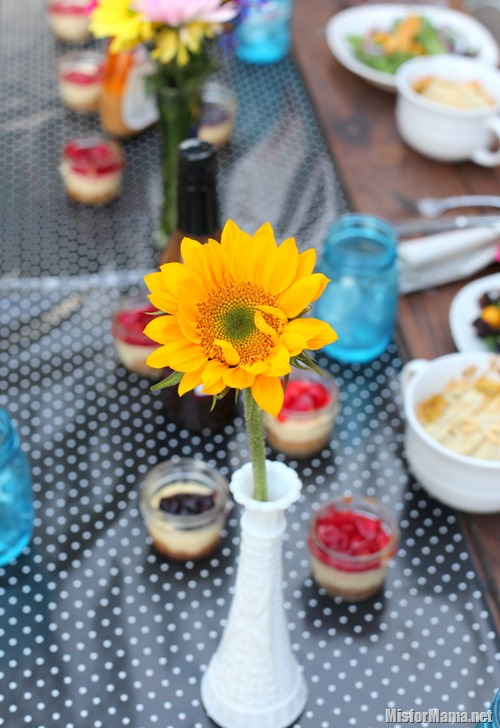 I arranged them in some pretty milk glass vases I already had and a few I borrowed from Jolinda (apparently, it takes a village to pull off a dinner party!).

Instead of ordering the striped black and white fabric  from my inspiration post (which would have been expensive and for which I had no specific use afterwards), I snapped up this cheap black and white polka dot wrapping paper that I spotted at Tar-jay one morning.

Shaun ran it down the middle of the tables for me, secured it with a bit of tape, and we called it good. 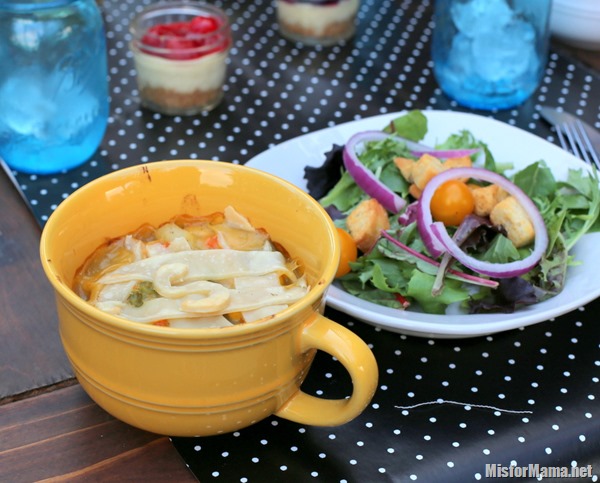 The effect was subtler than the stripes, but with everything else going on, I was happy to have something that took a backseat to the brighter elements.

I’ve forgotten the absolute best part of all! 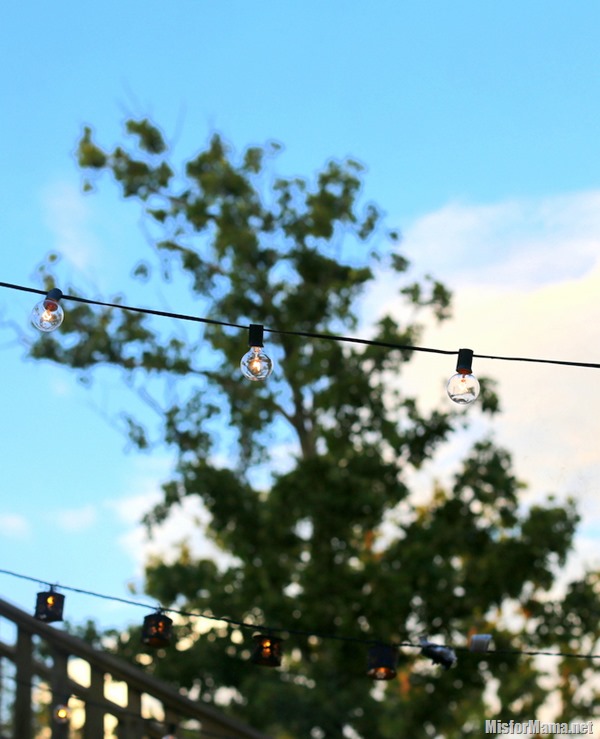 In fact, as a trickle of, “Praying it won’t rain for your party tonight” messages came in through IG, FB, and my email, I kept checking the weather and watching the chance of rain drop 10% at a time (it started at 60% with a high chance of evening thundershowers, of course) until finally, with about an hour to go before everyone arrived, it was down to 10%. The last time I checked it, right before we ate, it was at 0%.

Not that I needed Weather.com to tell me that when they skies were perfectly blue with puffy white clouds, and the sprinkles throughout the day had cooled the temperatures well below their usual for the end of May.

(Side note: one of my guests teased me that there were a lot of people in E. Texas who would be upset to know that I had prayed our usually very welcome chances of rain away; and then? The next day, when the chances of rain were slim, it DID rain. So, no harm done. :)) 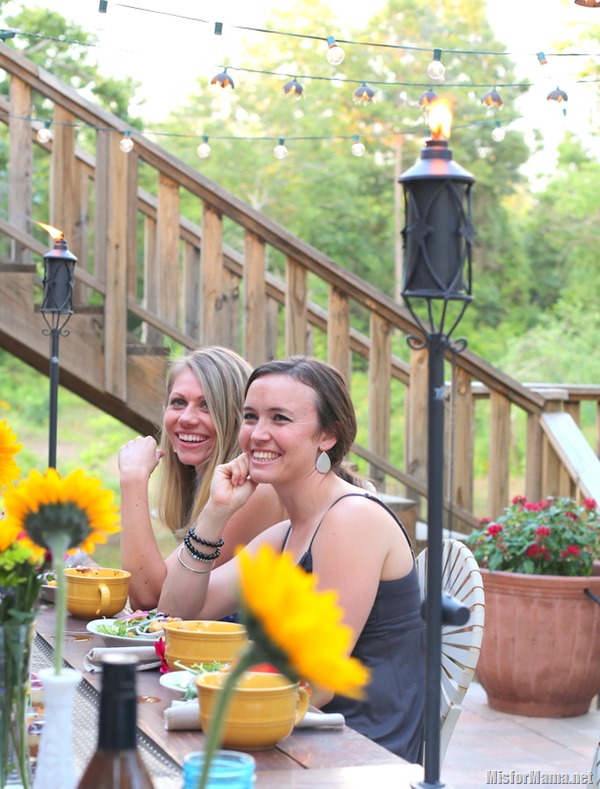 Honestly, I was just so humbled that y’all cared enough to send me those messages in the first place and take time out of your busy day to pray for something as trivial as my dinner party. But I’ll tell you this: God heard you, and He was so gracious to give us such a beautiful evening with friends. 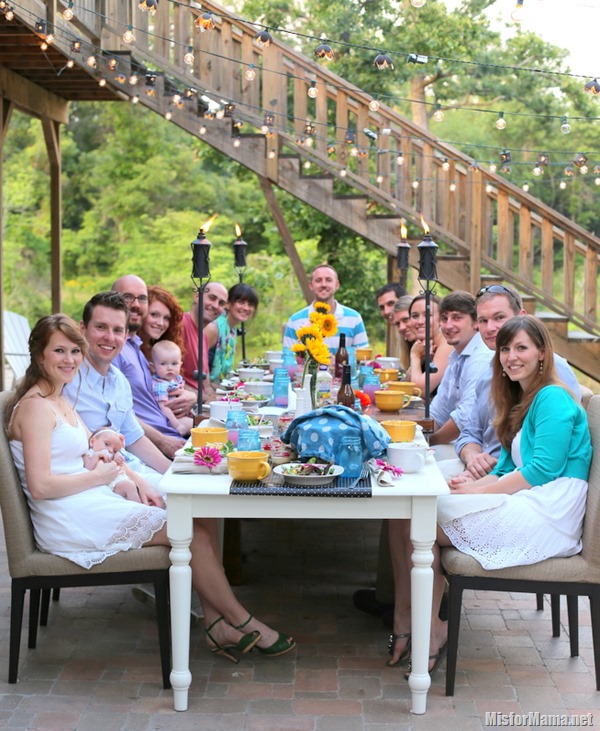 Everyone seemed to have a lovely time (I know I did!), and all the food got eaten, and there was tons of laughter and chatting and just plain good fun. 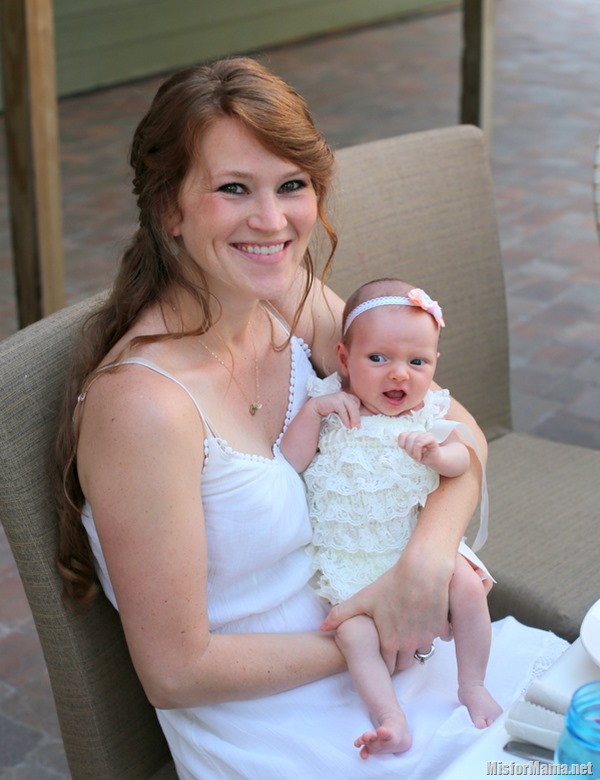 My gorgeous sister-in-law, Hannah, with my new niece, Halleli (who, I’m pretty sure is saying, “WHERE’S THE CHEESECAKE!?”).

Oh, and since I know that at least a few of you have been tapping your foot impatiently, thinking, “All well and good, Abbie, but which dress did you choose??” 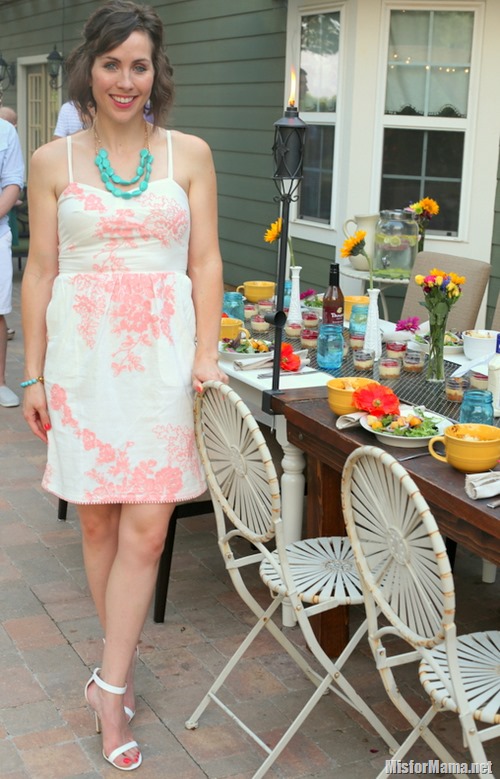 I went with Number 4, which, admittedly, was my favorite all along and which was the landslide winner of the poll as well.

At the last second, I threw on that turquoise necklace and bracelet because the gold necklace and earrings felt too fancy, and I’m happy with the effect.

Everybody else took advantage of the opportunity to gussy up a bit as well. Here are all the ladies, looking pretty and with a remarkably small amount of food on our fronts (yay, us!). 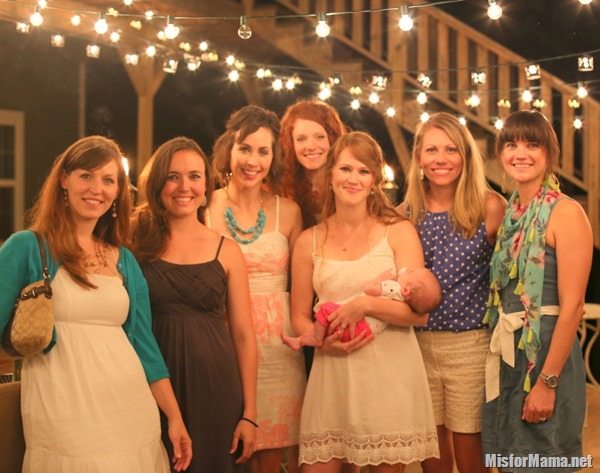 Since we have our big room upstairs, I got my trusty babysitter, Sage, to come watch kids for anyone that needed childcare since I didn’t want that to be a hindrance to being able to come. I love this shot of my friend Lindsay’s little girl, Evy, streaking across the patio after the dinner was over and done. 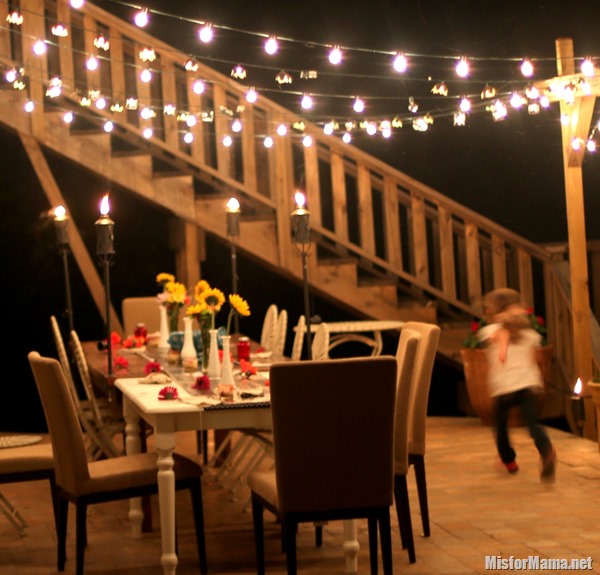 As you might be able to tell, everything was a success, fun was had by all, and, since I kept things fairly simple, I didn’t feel like I’d been hit by a Mack truck when all was said and done.

Who knows? We may only wait ONE year before we do this again!

And now, I’m off to explore somewhere wonderful and new. I hope y’all have a fantastic Monday!