Are y’all ready to finish off… 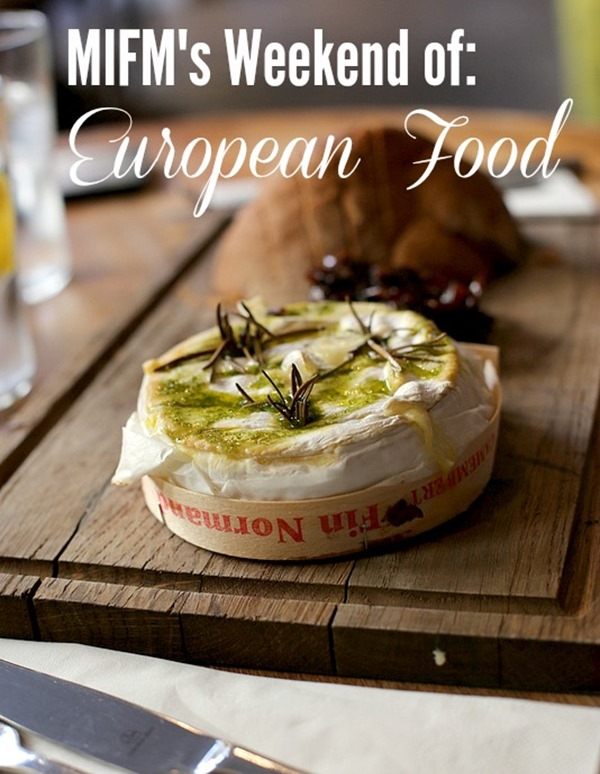 Yes, I realize that Monday is no longer the weekend, but I’m okay with pretending that today’s a holiday if you don’t  mind (actually, considering the pile of dishes in my sink and the laundry piled on my couch, I’m having a great deal of trouble pretending that, but still).

Here’s the thing: if I give Parisian food the treatment it truly deserves, this post will be forever long (and, yes, I say this realizing that my other posts haven’t exactly been short).

So, I’m going to try to hit the highlights. No promises that I won’t get carried away, though.

Our first day there, we started out with a fabulous lunch at a tiny creperie  called Little Breizh on St. Germain. Highly, highly recommend. 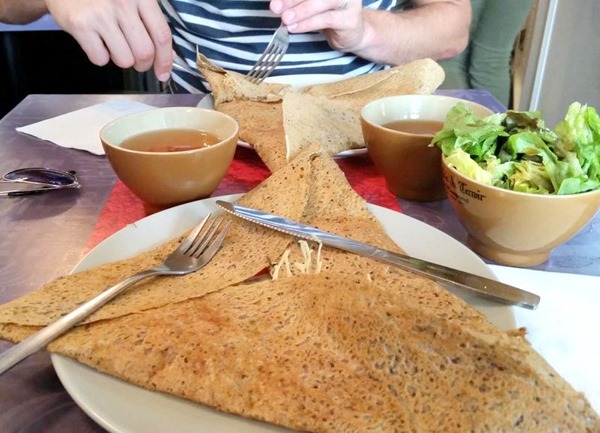 {Buckwheat crepes filed with tomatoes, egg, and cheese + yummy cider, which is kind of the traditional beverage with crepes in Paris} 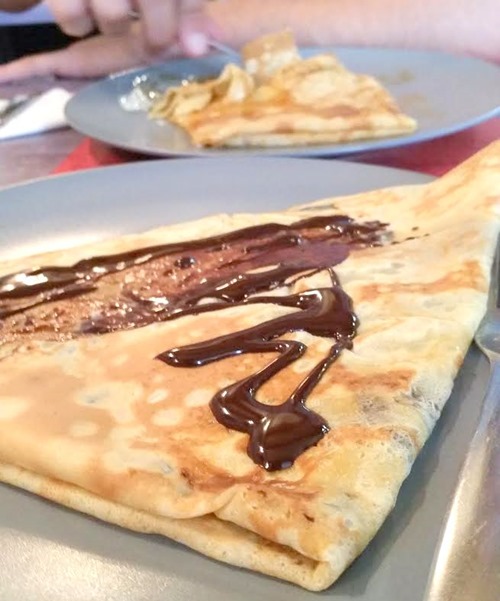 {Dessert crepes too? Mais oui! Chocolate for me, caramel for him}

But that night…oh man, that night was by far the worst—the laughably worst—meal of our trip.

I’m actually kind of glad we experienced it, but I am so, so sad that I have no pictures of that particular culinary experience. To be fair, the food looked okay. But, my friends, it was not okay. 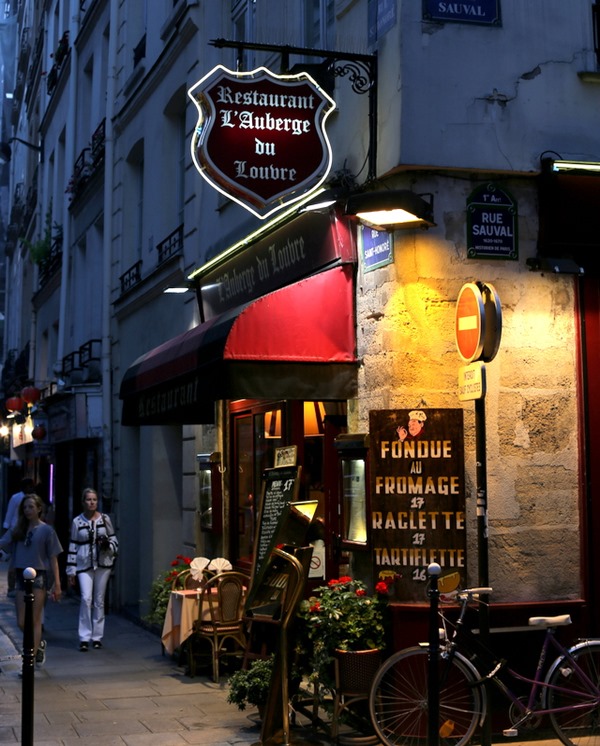 Even the outside was deceptively picturesque, complete with red geraniums and a vintage bike leaning against the corner (at least when I snapped this shot several days after our meal).

But, if you look closely at the sign with the little guy in a chef’s hat on it, you’ll see the problem. Specifically, the 17 € part.

I don’t know why, but even after a decent amount of research, neither one of us had realized that the norm for Paris is that full evening meals at the restaurants are expensive. If you order the “menu” (which is just their word for an appetizer, main course, and dessert), it will set you back anywhere from 30-50 € at a reasonably priced joint, and when you do the conversion to US dollars, you’re looking at $45-$75 per head every night.

That was a bit of a problem. I mean, no, we didn’t have to eat an appetizer, meal, and dessert every night, certainly, but ordering things a la carte was almost as expensive (since most main courses started at 17-25 € and were not necessarily big enough to fill you up on their own). And without knowing what to look for, it was kind of hard to find places that just served something simple like a sandwich at dinner (many of the places that served lighter fare were only open for breakfast or dinner).

Throughout the trip, we’d relied on either local recommendations or the trusty Wifi in our rentals to find worthwhile, reasonably priced places to eat. But that first day, after a good 45 minutes of futile internet searching for something decent-looking to eat that didn’t cost a fortune, we looked at each other and said, “Let’s just wing it. I mean, there’s, like 50 restaurants on our street alone. How hard can it be?”

After wandering through our neighborhood for a while, we finally settled on Restaurant L’Auberge du Louvre because we were tired and hungry, the exterior was cute enough, and the menu was only 17€ per person.

By the time we sat down in the dark interior with the faded mauve table linens and got an eyeful of our dour, sweating waiter, we were already doubting our choice. After some pretty terrible French Onion soup, a salad absolutely drowning in “Caesar” dressing (that tasted like slightly gone bad Thousand Island), impossible-to-cut steak, questionable beouf bourguignon, curdled custard, and a burnt-to-black apple tart, we were both chuckling a little at how consistently bad everything had been.

I think my favorite part was when I asked our waiter if he would recommend the apple tart, and he made a face like he’d just tasted soap, threw his hands up like he was warding off a blow, and said weakly, “It’s all…good.”

The rest of the trip more than made up for that disappointment, though, with daily trips to the Boulangerie Julien (a bakery a few steps from our rental that just so happened to have won the Paris-wide contest for best baguette that year). 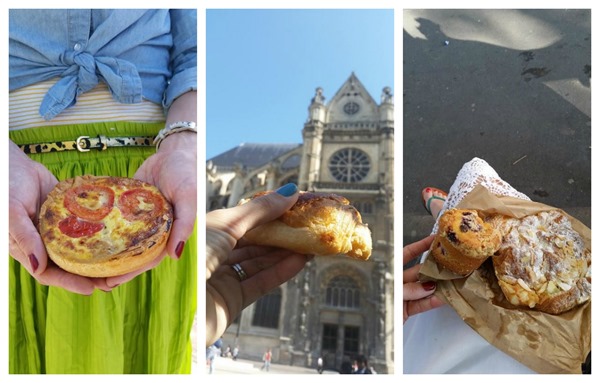 Their almond croissants, quiche, and pain au chocolat were all superb. (P.S. That cathedral in the background was just around the corner from our rental, and, yes, in case you’re wondering, food eaten in front of beautiful buildings really does taste better :)).

One of our favorite experiences of the entire trip was a food tour that we took with Culinary Tours of Paris. Our guide, John-Paul (an American living in Paris for the last 6 years), and his wife, Julie (a Frenchwoman), were both just lovely and sweet and so knowledgeable of the Montmartre area (in which they live) that we toured.

We made three stops on the tour:  one for bread, cheese, and charcuterie (various meats), one for our main meal (at a restaurant that was started by and has stayed in the same family for 105 years!!), and at a creperie for dessert.

All of the food was delicious, starting with the appetizers and continuing on with this chicken for Shaun: 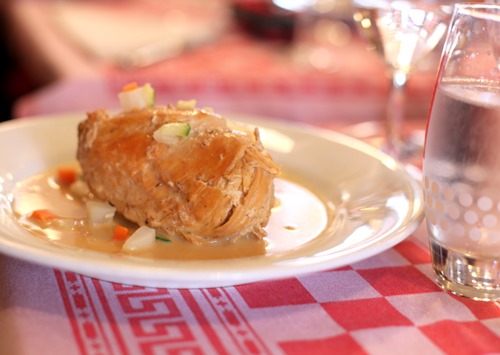 and this guinea fowl for me: 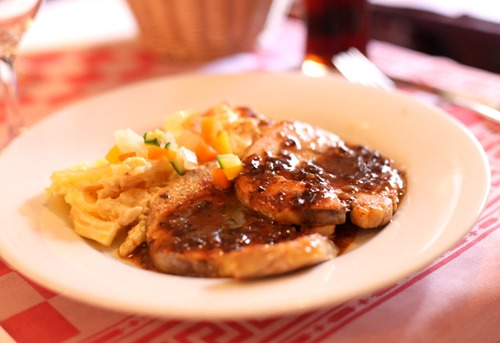 But the real star of the show was this guy: 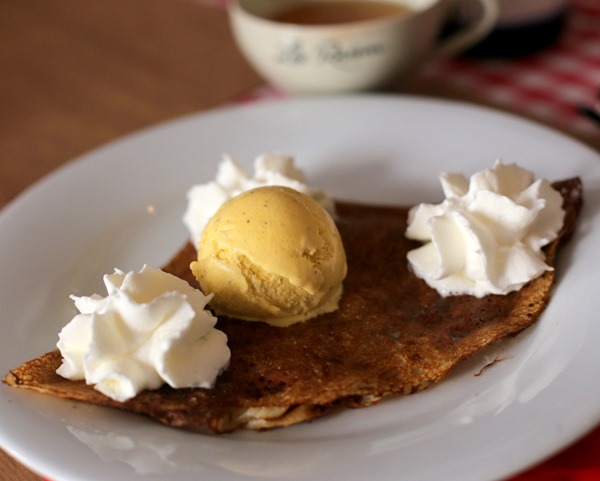 That would be La Salidou crepe at Creperie Broceliande in Montmartre. It was kind of life-changing. It’s a buckwheat crepe filled with apples and homemade caramel sauce and topped with vanilla ice cream (different than any I’d ever had) and real whipped cream.

Good. Gracious. Me. It is SO sinfully good that we went back for lunch the next day and had a savory crepe and another Salidou (plus the banana Mont Blanc for Shaun, which was oh-so-tasty as well).

The Broceliande is way up there on our recommendations of places you must visit if you find yourself in Paris.

How about Pasco, where we ate such deliciousness as this: 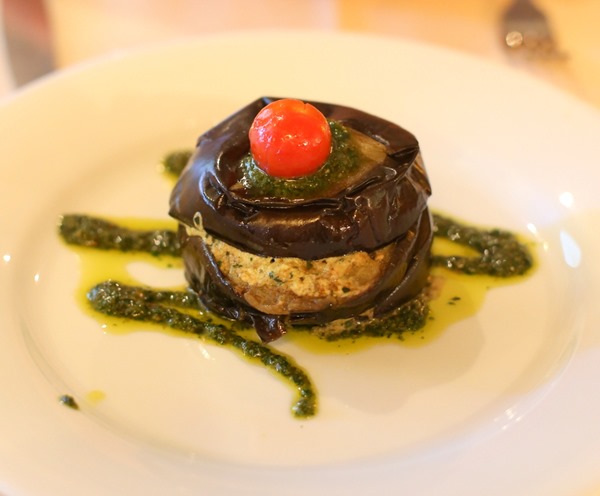 {I had no idea eggplant could be so creamy} 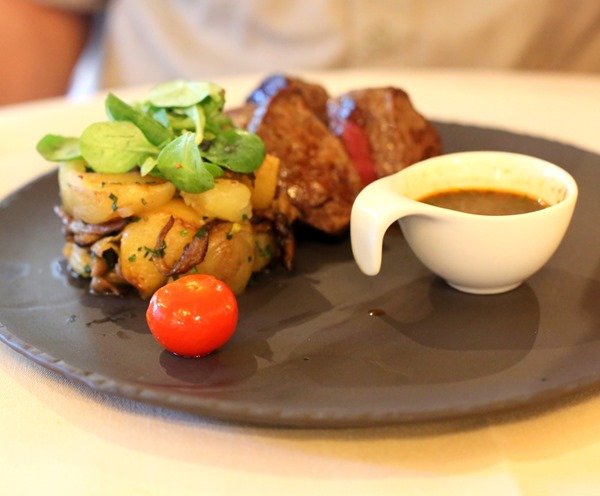 {I’m not so much a red meat kind of girl, but I wanted to steal his steak that night} 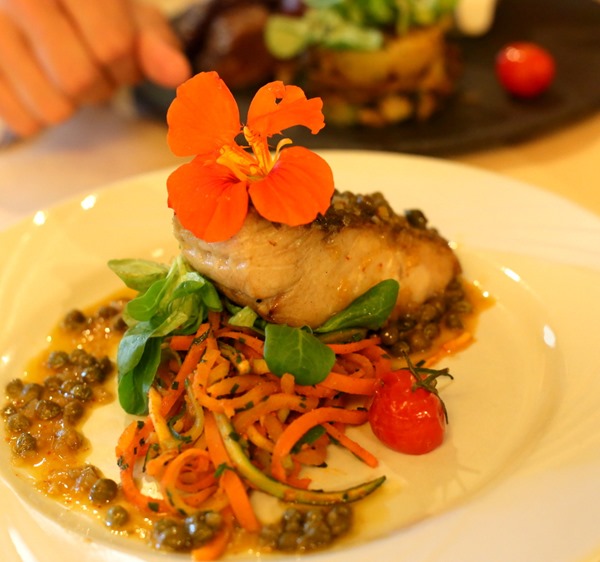 {I’m actually usually not so much a fish girl either, but this cod—I think it was cod? suddenly, I can’t remember—was really tasty} 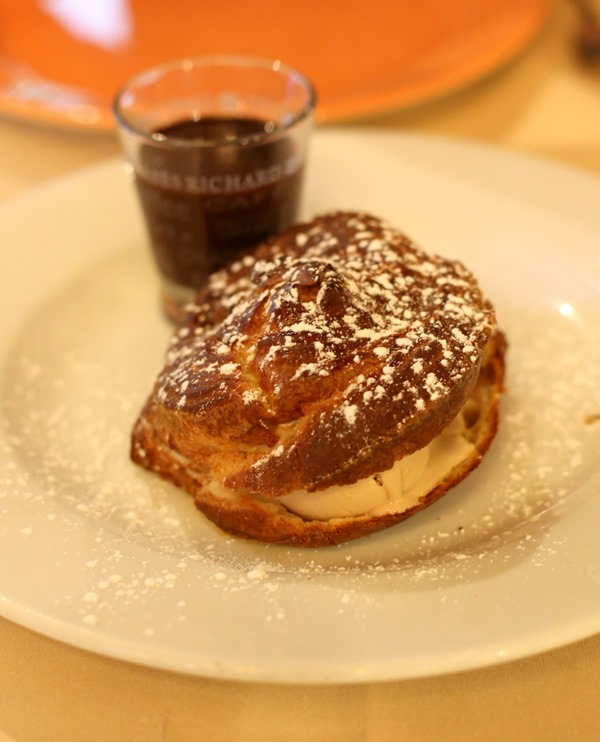 That would be a homemade profiterole stuffed with ice cream and paired with the deepest, richest chocolate sauce on the side. A sauce so good you wanted to drink the leftovers straight from the glass. 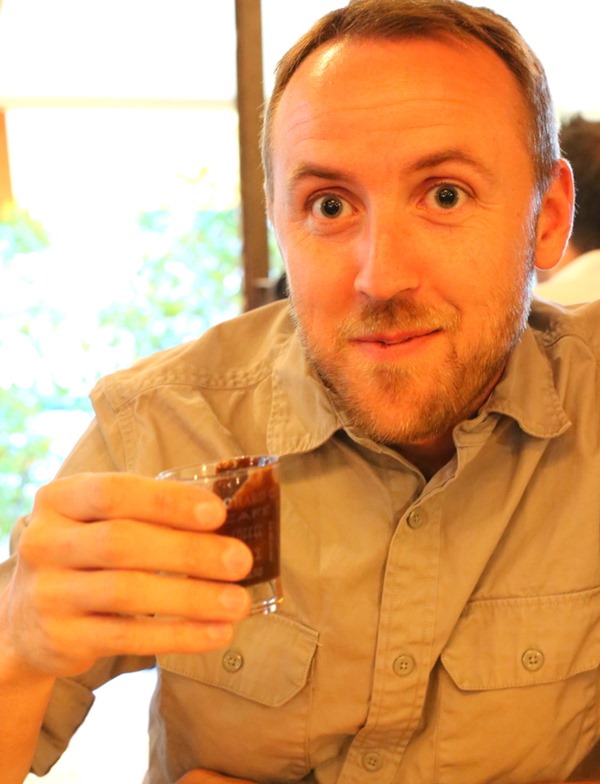 I think this is Shaun’s, “dare me?” look. I dared. He did it. And then I tried to get at the last little bits that he missed. Oh yeah. I bet you want to go to a fancy French restaurant with us now, huh?

That whole restaurant experience was really lovely because the decor was relaxing and current (there’s always something a little bit sad about doing a special meal at a nice restaurant only to discover that the atmosphere is really dated, dark, and mood-killing)—upscale, but not stuffy, and the maitre d’, whom I initially pegged as the ultimate suave Parisian restaurant snob turned out to be kind and funny and personable and very helpful with the menu, which eased this I-never-eat-at-fancy-French-restaurants girl’s jitters.

Also, although this meal was definitely a splurge, the prices were extremely reasonable compared to others we’d seen, so it’s a definite 4 thumbs up from us.

Another fun (cheap!) meal was Las du Falafel in the Latin Quarter. I lived in Israel when I was really small (3-4), but I can still remember the falafel we would get from the markets, and I’ve had a soft spot in my heart for it ever since. I don’t get to eat it often, but I order it every chance I get, and Las du Falafel had the best falafel balls I’ve ever tasted.

I know I took a picture somewhere, but I can’t find it, and, honestly, while their huge, sloppy falafel sandwiches are an explosion of yummy flavors in your mouth, they’re not especially pretty to look at.

We ate another cheap, yummy meal at a farmer’s market we stumbled upon near the Bastille. 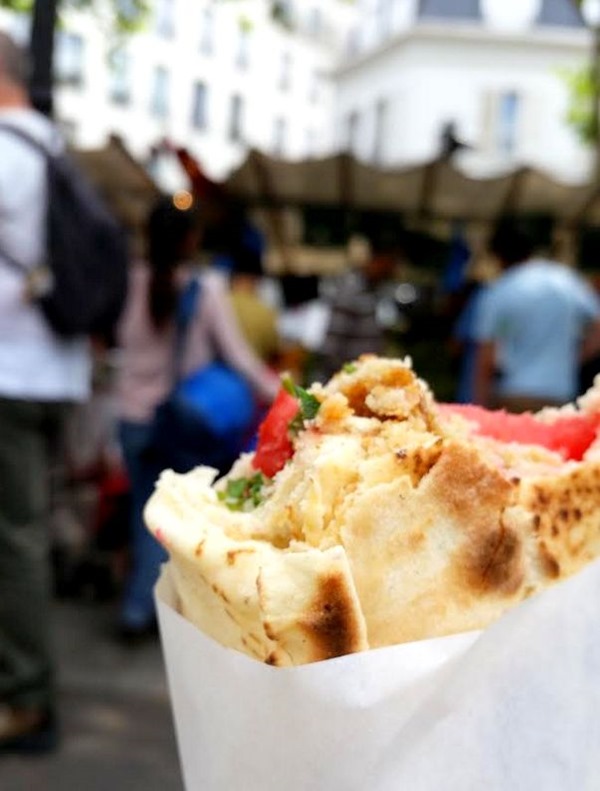 We ordered that falafel (which was totally different than the one from the night before), half a roasted chicken, and some fingerling potatoes from 3 different food stalls and then sat in the middle of the market by the fountains, people-watching, and eating mostly with our fingers. It was fun.

It’s all starting to run together, but at some point, we ate pizza at a place near our rental which was incredibly reasonably priced and good. 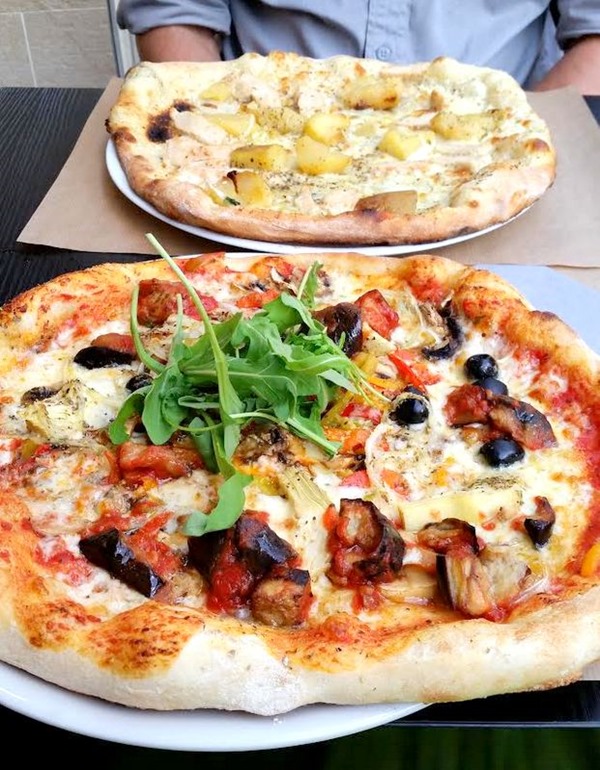 I ordered that veggie pizza there and was convinced I couldn’t finish it (even though I was quite hungry), but somehow managed to down the entire thing! (It was the weirdest thing because it started out good and just kept getting better and better until I was pretty much convinced it was the best pizza I’d ever tasted).

We even got to watch some World Cup action on their big screen TV while we ate.

And then, because we had pretty much thrown all caution to the wind by this point, we followed up our pizza-gorging by sharing this apple tart (which was not burned beyond recognition, thank goodness) at a place on our way home. 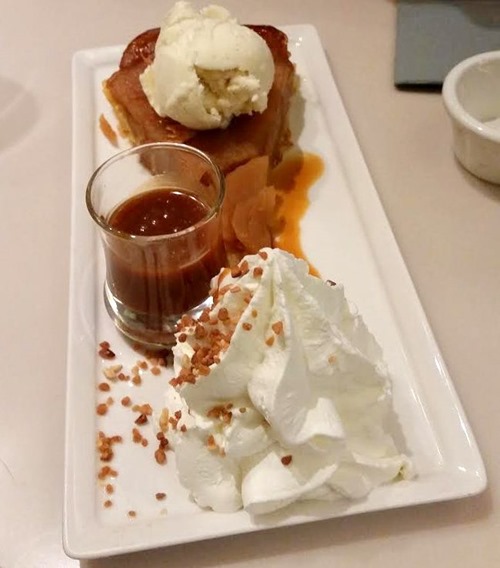 Our last night there, we found another nicer (but still reasonable) restaurant to visit so we could go out with  a bang. We didn’t have reservations and ended up waiting outside for 45 minutes or so (I’m so glad I was wearing my red coat because it was pretty chilly!), but it was well worth the wait with another pleasant experience at 7eme Vin, where the Maitre d’ was again kind and helpful (and somehow seemed like the perfect person to voice a French bullfrog in an animated movie).

This is going to sound like damning with faint praise, but the food there was delicious without being especially memorable (except for Shaun’s vegetable pate that he raved about). We thoroughly enjoyed everything we ate, but it wasn’t as unique as some other things we tried…if that makes sense. It was absolutely a worthwhile stop, though. 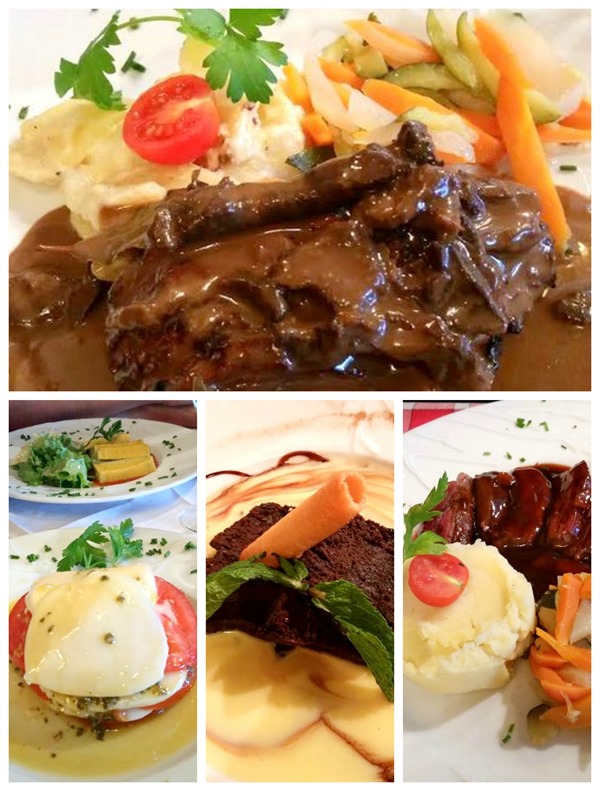 I’m pretty sure I failed miserably at keeping this anything close to as short as a blog post about food “should” be, but I definitely could have added more details/stories along the way, so we’ll all just pretend that that’s an example of true restraint, m’kay?

Hope you guys have enjoyed our three-day tour of (an admittedly limited selection of) European Foods.

Clearly, we enjoyed eating them!

Also, just in case y’all are thoroughly sick of all this Europe, Europe, Europe business, I thought I’d give you a heads-up that, while I have more to show you, I’ll be interspersing several “regular” posts in with the trip recaps.