We were only in London for a day and 1/2, but we managed to cram a lot of fun (and food!) into those brief hours.

Obviously, if you read my recap of our culinary experience in Greece, you saw that we embraced the local food wholeheartedly. No burgers or pancakes for us, no sir.

But London is different. I mean, yes, there is quintessentially British food to be had, but the city is such a melting pot of international flavors, both literally and figuratively, that your average Londoner is more likely to chow down on “a curry” than “bangers and mash” or “steak and eel pie.”

We weren’t particularly into sampling the truly authentic fare (the phrase, “blood sausage,” makes me shiver), so our first afternoon there, we set off walking from our rental, armed with some general directions from our host, and quickly stumbled upon a well-reviewed Thai restaurant on Charlotte street (our host gave us a phone equipped with Wifi, so we were able to look up restaurant ratings on the fly, which was awesome).

It was 3 PM, we hadn’t eaten lunch, and we were famished, so we ordered heaping plates and dug right in (I barely remembered to snap a picture first). 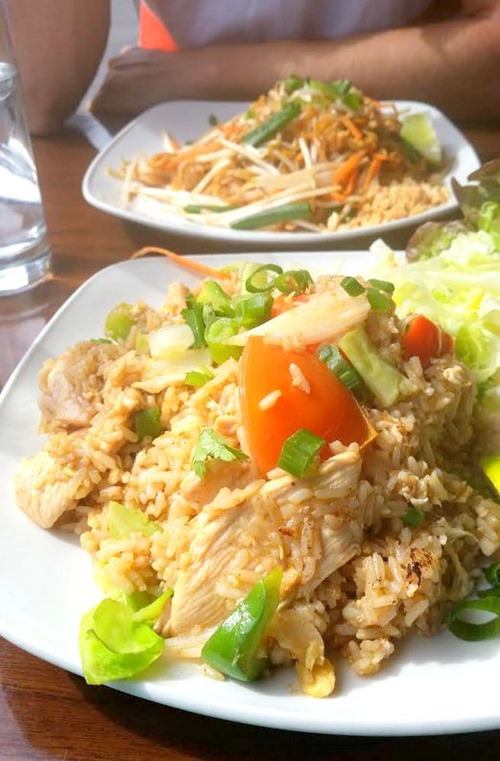 I don’t know if it was primarily due to the quality of the food (which was very high) or my hunger, but that chicken fried rice was one of my favorite meals of the trip. I downed that huge plate of food and found myself wishing for more.

The rest of the evening was spent walking and sight-seeing, and we didn’t eat dinner until almost midnight (????). We ended up wandering into an Italian restaurant that was so authentic that, when we asked them what kind of crust was on their pizzas, they had no idea what we were saying! We ended up ordering a pizza each, and they were good, but not earth-shattering. I was so tired and bleary-eyed at that point, though, that I forgot to take a picture.

The next morning, we headed to St. Pancras station (which was minutes away from our rental) and bought various yummies from a bakery in the terminal (that may sound weird, but the station is huge and new and filled with boutiques and restaurants and flower-shops…very cool!).

Tangent: 5 1/2 years ago when Shaun and I went to Sydney, we took a train one day outside the city and hiked and visited various villages. In village called Leura, we happened upon a non-descript little bakery with rather unfriendly owners but a HUGE selection of the most amazing-looking, cheap (!!) pastries we’d ever seen. We bought a plethora of options to eat then and take back with us on the train, and I kid you not when I say that I have never had such heavenly desserts. Every single thing we tried was absolutely delectable.

But the pastry to end all pastries was their almond croissant. I can’t begin to do justice to its moist, flaky, almond paste-filled deliciousness.

Since that day, we’ve bought an almond croissant wherever we can find them. 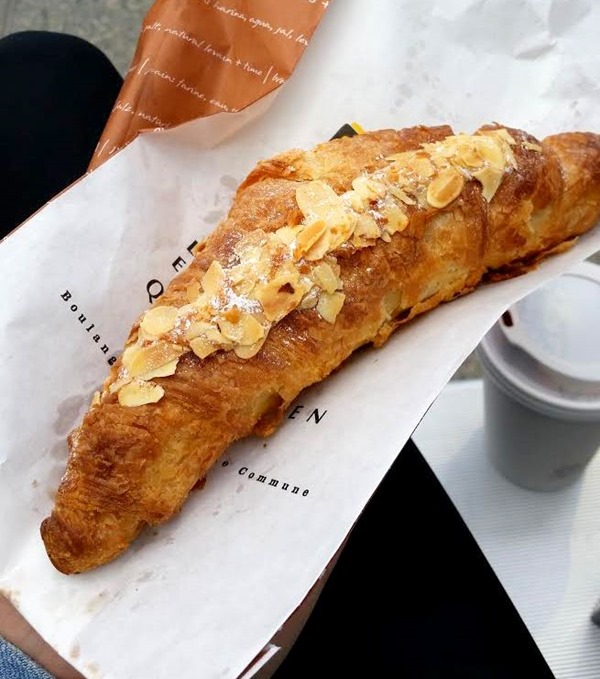 We got one that day in St. Pancras station, and it was good, but it, too, fell woefully short of the standard of perfection set by that unlikely little bakery in Australia.

After breakfast, we walked to Camden Markets and proceeded to spend the next several hours browsing through the maze of shops, until quite by accident, we stumbled upon a courtyard filled with food booths.

Ask Shaun, and he will probably tell you that this was his favorite part of the entire trip. And knowing how much men like to eat, I can’t really blame him.

It was essentially a tour of the world in food. Every booth had something different to offer—crepes from France, Paella from Spain, genuine Belgian waffles, Lebanese falafel. Pretty much you name it, and it was there. 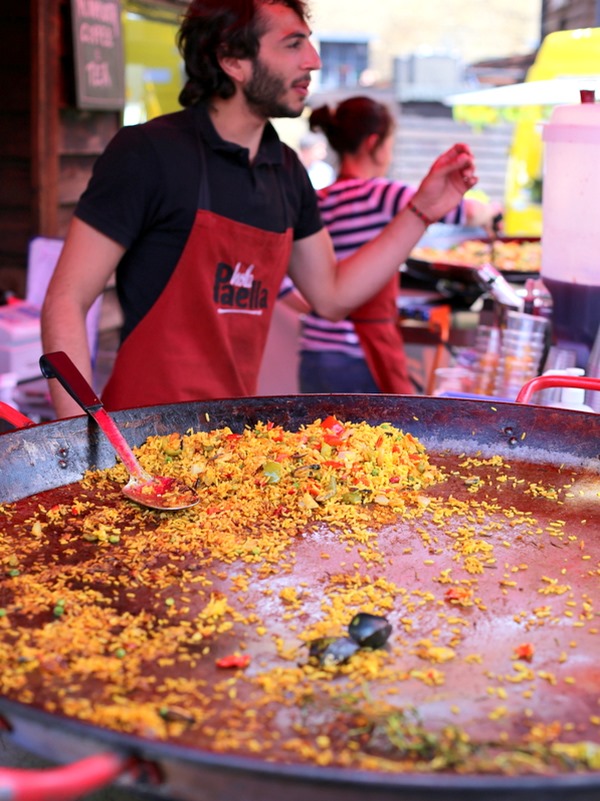 And…they were all handing out SAMPLES! 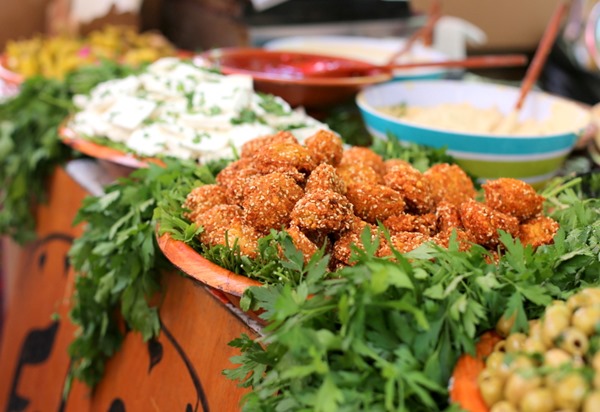 We meandered around tasting one scrumptious morsel after another until I finally settled on some sort of chicken tandoori wrap that was wonderful and Shaun went for a Philly cheese steak sandwich, which…ended up not being his favorite. But still. The overall experience was so stinkin’ cool because of the ability to interact with so many different cultures at once (we had a fun discussion about the meaning of our German last name with the Belgian waffle guy who was from Germany), not to mention the stellar quality of all the crazy-fresh, unique food. 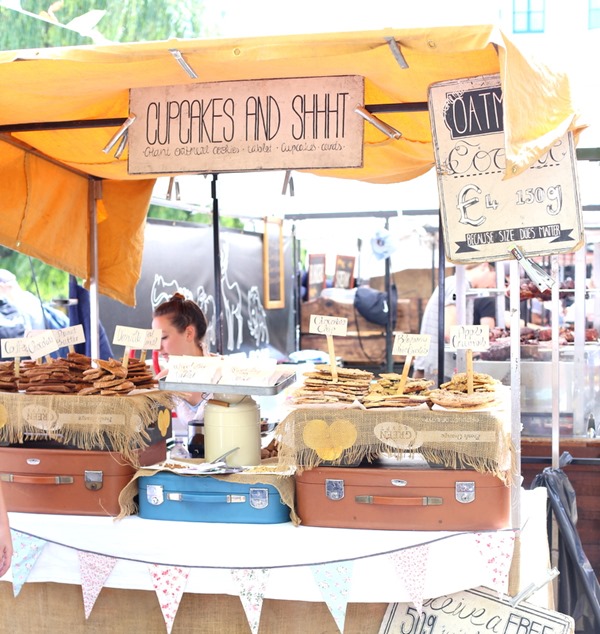 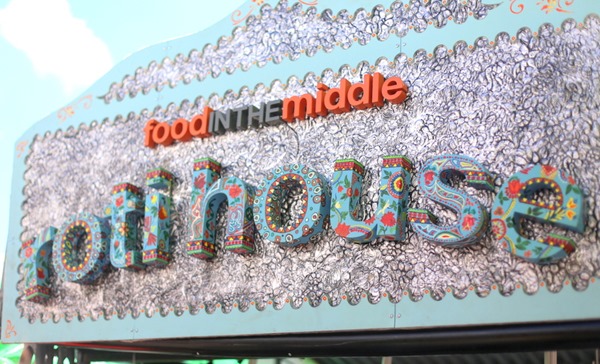 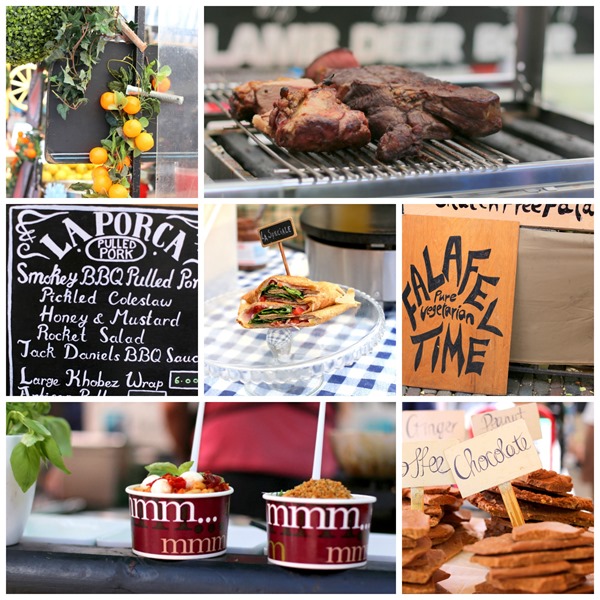 So much goodness. So hard to choose. 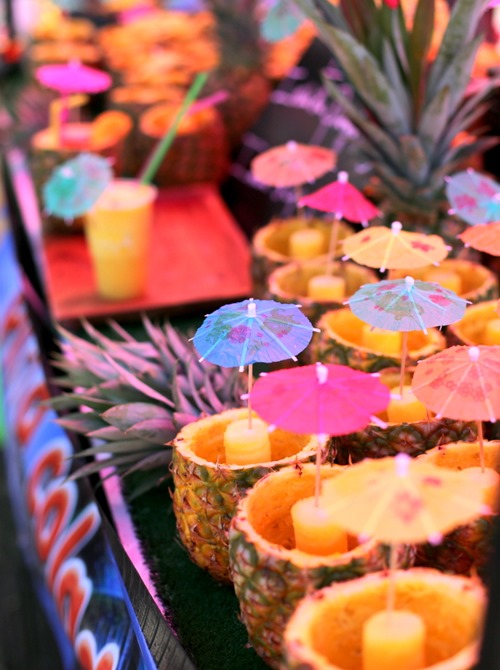 {These virgin pina coladas were incredible!} 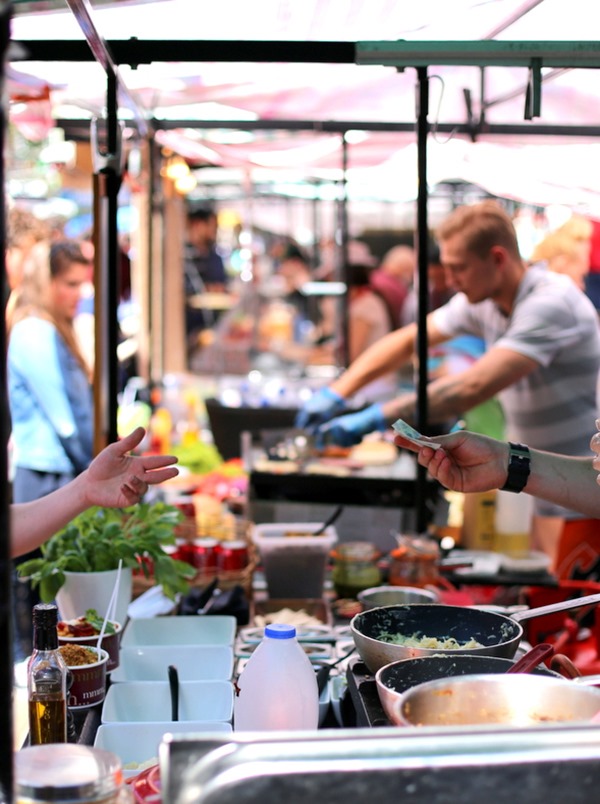 {The stalls were hopping!}

After the markets, we took the metro to Notting Hill and walked the streets until we got hungry, at which point we ducked into quite possibly the most “me” restaurant I’ve ever been to, at least as far as decor goes. 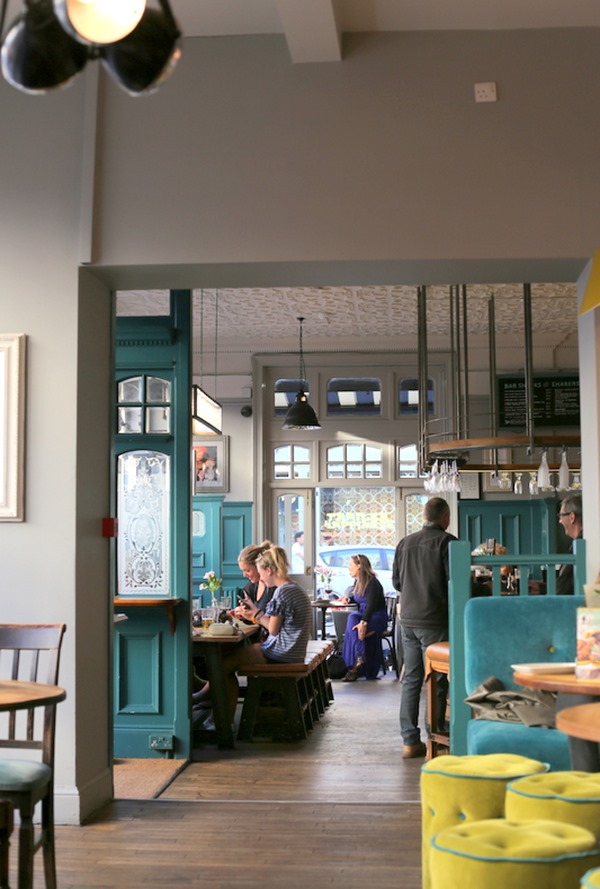 All the wood was painted teal, people! 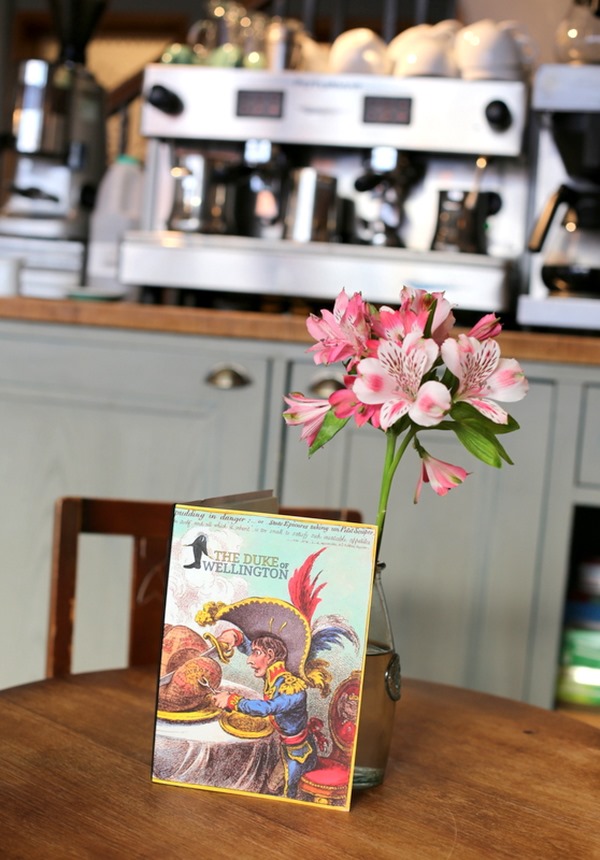 Even their menus had flair! 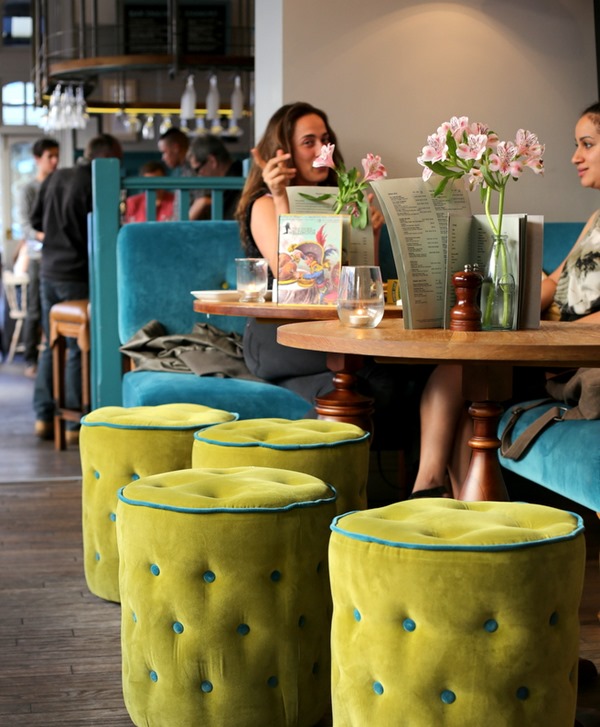 And don’t even get me started on those fabulous tufted stools. 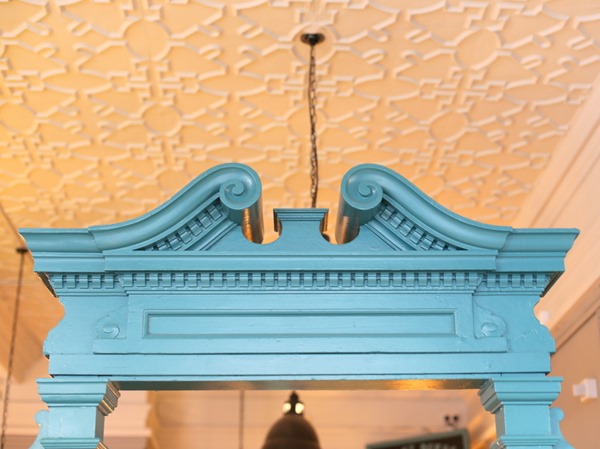 Or the gorgeous ceilings. 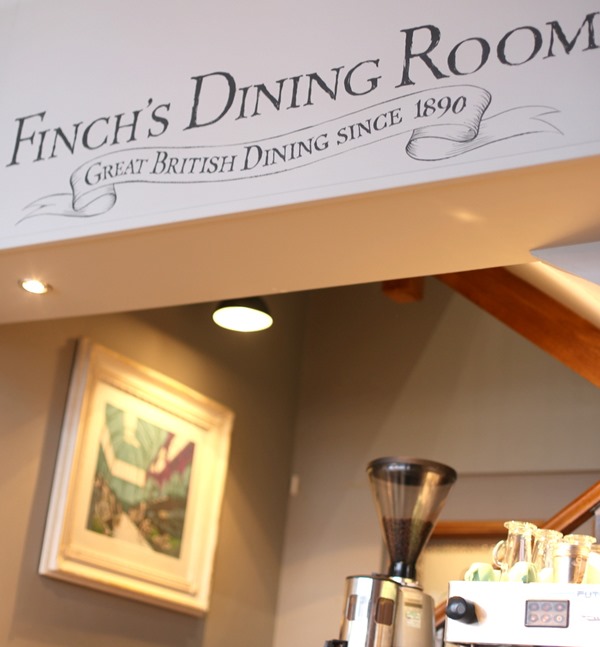 If you’re ever in the area, make sure to check it out.

Our waitress was so friendly and helpful with our menus.

We started out with this (giant!) helping of creamy camembert + caramelized onions + crusty bread. 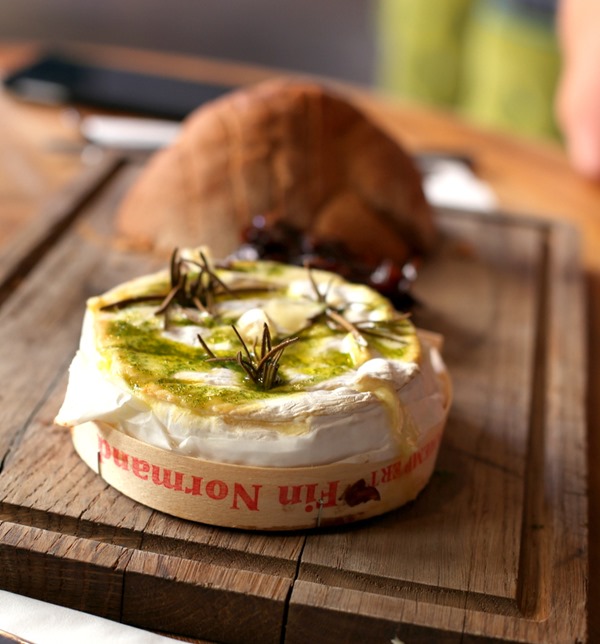 And then he ordered the beef wellington…. 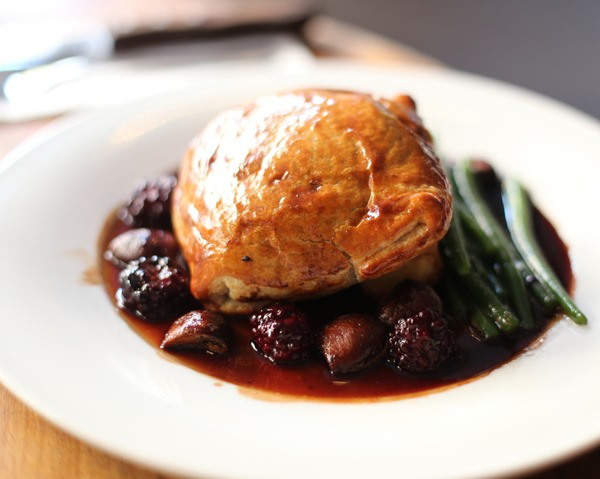 … and I got fish and chips, which were both quite tasty. 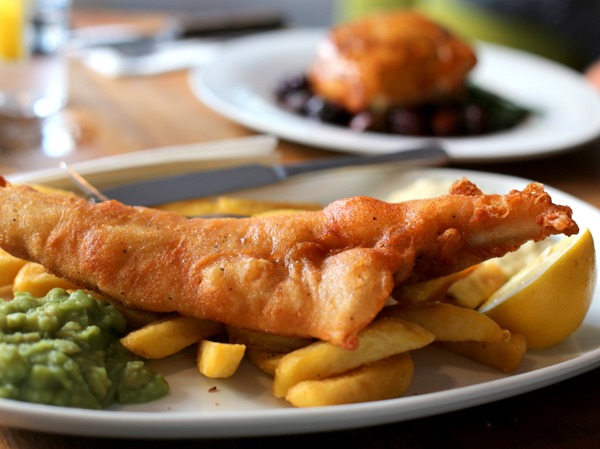 For dessert, we ordered a lemon tart (fresh out of the oven!), which came with ginger ice cream on the side and was one of my faves of the trip. 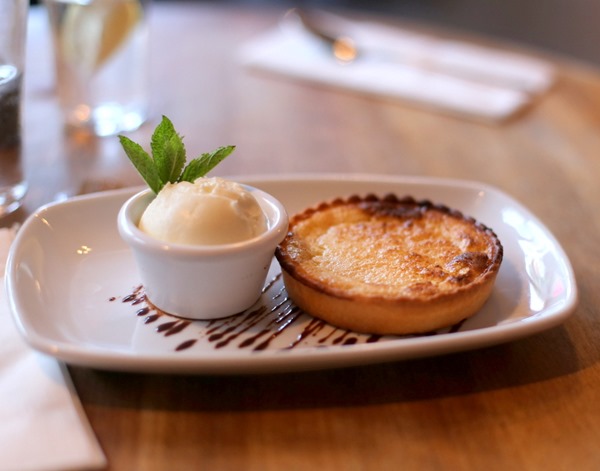 And then, we rolled ourselves back to our rental, very full and very happy.

And there you have it for our London eats, folks! I’ll be back soon for a recap of our Parisian gastro-adventures, which are probably the most epic of all.

Hope your lunch doesn’t taste too bland after all that exotic goodness! (I know mine will)