In the past, when I worried more about such things, I would sort of dread vacations because of all the eating out. I am not a perfect eater at home. I have my fair share of indulgences (hello, sweet tooth), but I do actually prefer to eat good-for-me foods on a regular basis.

And, while I realize that it’s completely possible to be just as healthy and disciplined on a trip as at home, there’s something more than a little depressing about going to a fancy French restaurant and ordering a salad with your dressing on the side (not that this is any way the definition of healthy eating; just an extreme example).

So, for the past several years (really, starting with my pregnancy with the twins, knowing that I needed to gain more weight than usual so they could thrive), anytime we’ve traveled, I’ve made a concerted effort to turn off the calorie-counting portion of my brain and just enjoy the culinary delights that the place has to offer.

And I am happy to report that I thoroughly enjoyed myself on our European adventure and that I have zero guilt about a single thing I ate, even if it means that some of my jeans are feeling a little snugger than usual.

I mentioned how much we walked, which was an average of 5-10 miles per day. So, that definitely helped keep the chocolate croissant bulge at bay. But also, while we ate heartily at our meals, we rarely snacked in between (I’m a big snacker at home and can rarely go more than 2-3 hours without needing to eat some grapes or watermelon or nuts or something).

I was rarely hungry on this trip until it was mealtime (sometimes, dinner wasn’t until 9 PM, which is crazy late for us Americans!), and I felt really satisfied—but not stuffed—after every meal.

So! All that to say that if there’s anybody else out there that dreads the eating part of trips like I used to, I encourage you to let it go and just embrace your circumstances for that brief period, knowing that you can exercise moderation even on a trip and still enjoy yourself and that, all too soon, you’ll be home and can buckle back down with renewed fervor if you need to.

And now, because I have 50+ pictures of food to show you, I am officially declaring this… 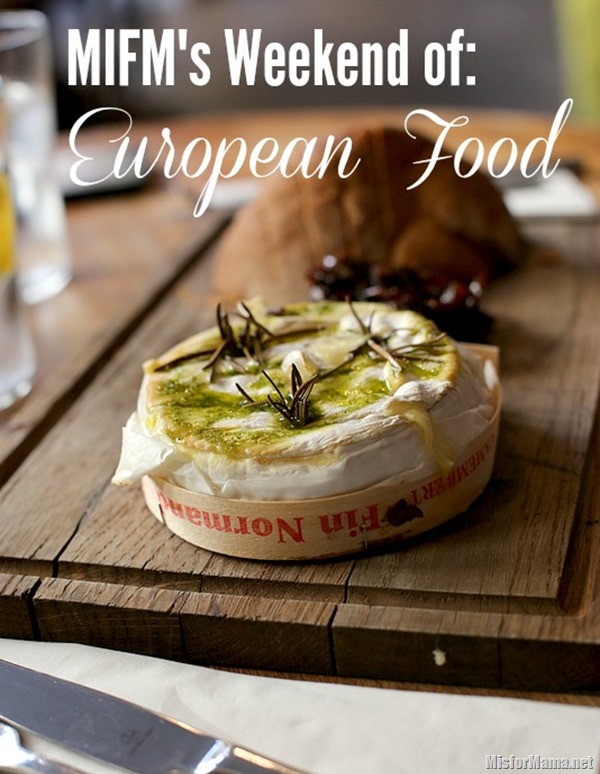 Today, I’ll show you what we ate in Greece.

Tomorrow  will be London.

Sunday  (or Monday, depending on how it times out) will be Paris.

I had one reader who basically said that she didn’t care about food either way when she traveled. She just wanted to experience the culture. But I consider food a vital part of truly understanding (wink, wink) another culture, so if you’re anything like me, by the end of this weekend, you’re going to be hankering for a really good meal. 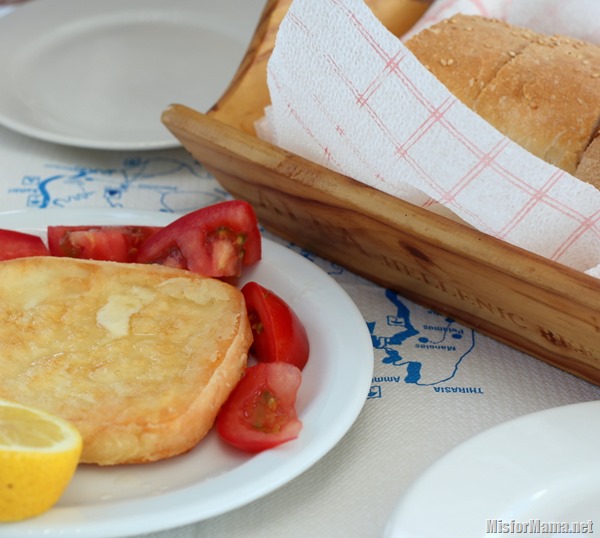 The picture above is of saganaki, which is basically a block of really salty, really dense fried cheese.  Sounds like a heart attack on a plate, no? Yeah. But honestly, if you eat it with bread, fresh squeezed lemon, and juicy ripe tomatoes, it’s pretty much a filling meal on its own. Definitely not an everyday item. But a really tasty treat. We ate it twice while in Santorini, and while similar both times, I think I preferred the version you see above at Captain Dimitri’s, which is a little roadside cafe run by a couple who grow, catch, and prepare all the food. So, it’s all crazy fresh, and the place just oozes character and fun! (The wife served us all small complimentary desserts of creamy Greek yogurt + a candied topping and then came out to have us guess what the topping was. Almost everyone guessed orange peel, but the real answer was carrots! It was a really fun moment to share with our fellow lunch patrons).

The views from your lunch table aren’t bad either. 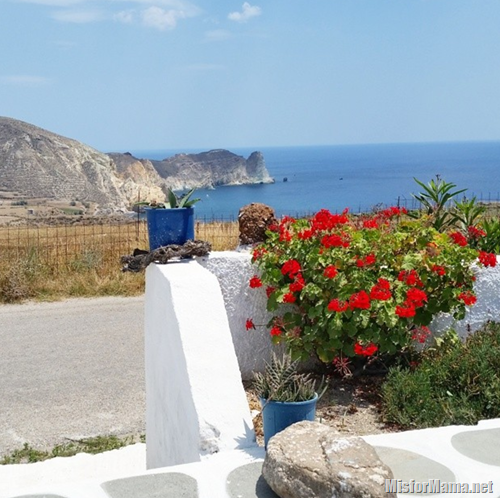 Dimitri’s was one of the “you WILL eat here” recommendations from our loquacious rental car agent, Andreas, and we highly concur that it’s worth a visit if you’re ever on the island.

I mentioned in Monday’s Santorini recap that our favorite restaurant there was Santorini Mou. We went there our first two nights for dinner and loved our meals (and the entire experience…because it’s so much more than just a meal) both times. 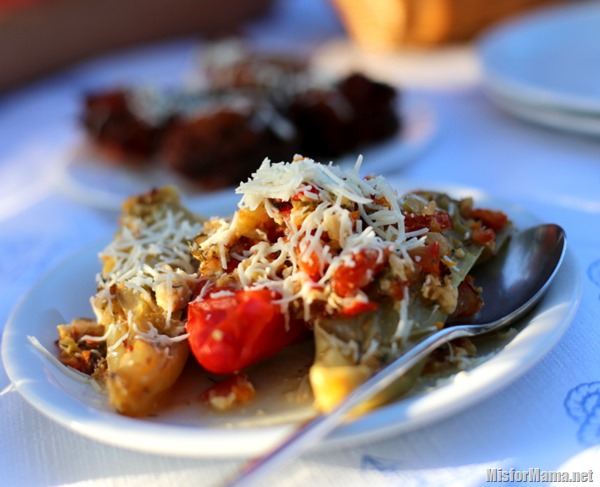 I didn’t get a good picture of them, but in the background of this shot are their zucchini fritters. Y’ALL. I’m salivating just thinking about them. I literally just Googled a recipe for Greek zucchini fritters because now I’m craving them. So, so, SO good. (Those stuffed peppers you see in the foreground were pretty great too). 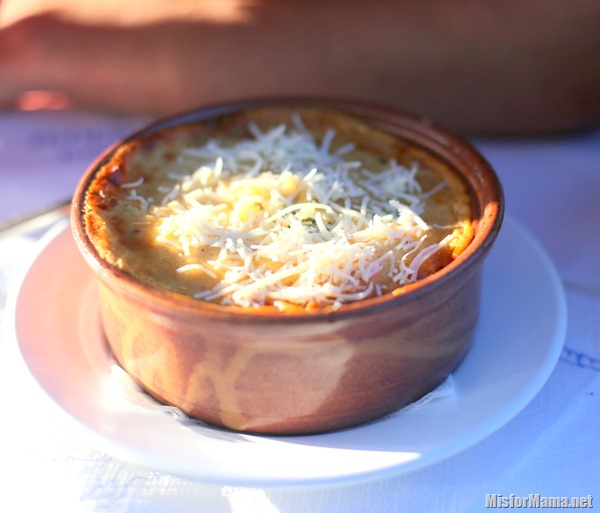 This is moussaka, another traditional Greek dish with layers of eggplant and sauce and cheese. Shaun loved it!

I was really partial to their Chicken Souvlaki with tzatziki sauce, Greek salad, and fresh pita bread. 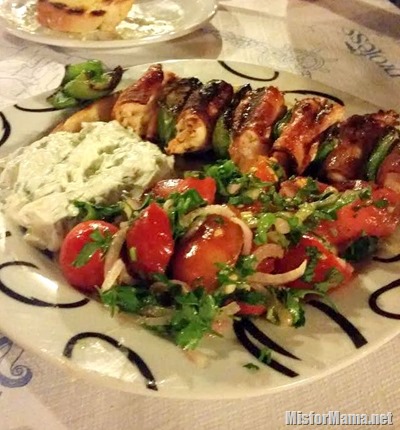 We actually started out our trip with a chicken wrap from a place in Fira, and it included lots of typical Greek ingredients like pita, grilled chicken, tzatziki sauce (aka: best sauce ever), and fresh veggies. 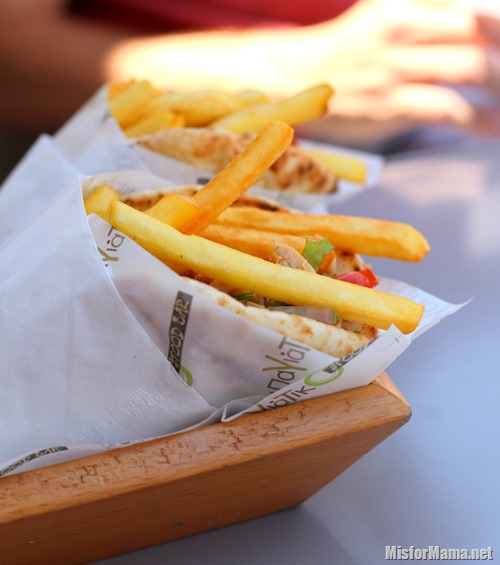 Plus, they threw in a few hot, crispy fries for good measure. Pretty much the perfect quick lunch. 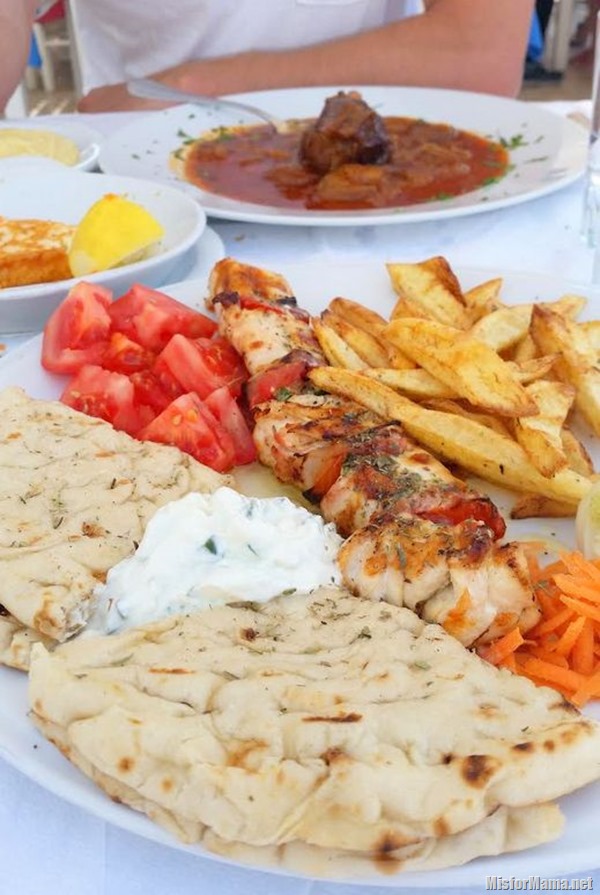 I didn’t end up taking a picture of it by itself, but in the background of this pic, you can see a shot of Shaun’s beef stifado, which was his favorite meal of the entire trip. It’s basically a Greek pot roast with fall-apart tender beef, veggies, and a super rich, flavorful sauce. I loved it too and have already looked up a recipe to replicate that one!

The name of this restaurant was Naoussa, and everything there was delicious as well, so that’s another one on our list of recs.

Our last night, we ate at a randomly chosen spot along the beach in Kamari, and while it was our most lackluster meal of the trip, it was still pretty tasty.

As far as sweets went, there was gelato. Of course. 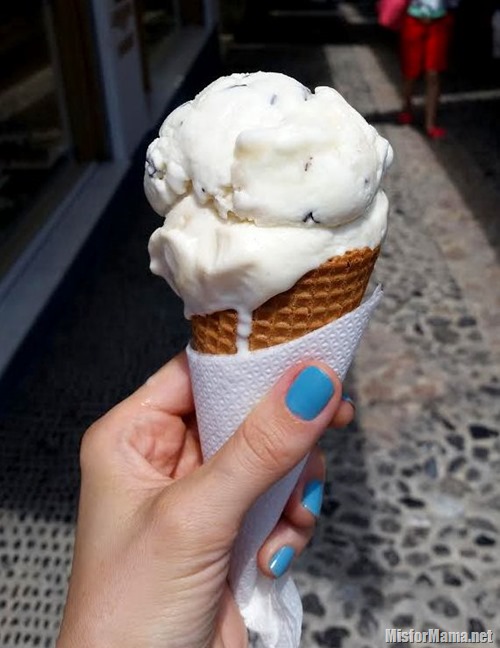 And rather large cream-filled pastries whose name I do not know. 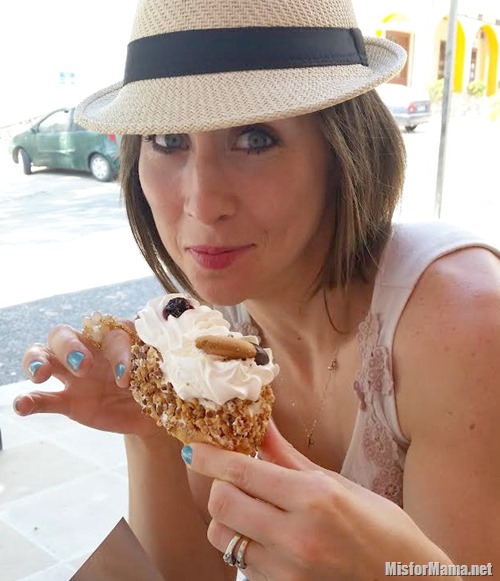 But I have nothing else of note in pictures, and I really can’t remember eating a lot of sweets there. We did, however, buy roadside cherries on two separate occasions, and those were awesome!

One quick story to finish: on our second day there, we did a lot of driving, specifically out to that lighthouse I showed you a picture of on Monday, then back to a beach in the opposite direction, then back towards the lighthouse to eat at Dimitri’s and then back to our rental.

And every single one of those four times we drove by a specific roadside shop, the owner was outside waving and smiling and hollering hello. She had the most infectious grin and just seemed so full of life and zest that on our last trip back, we decided we had to stop. The moment we entered her shop, she greeted us, thrusting a full tray of delicious-looking bite-sized delicacies at us (I kept trying to take something off the tray, and she kept turning my hand over to receive it, until I finally realized she wanted me to take the whole thing). She hustled us outside to sit in the shade a little table to enjoy it and then went back inside, smiling the whole way. 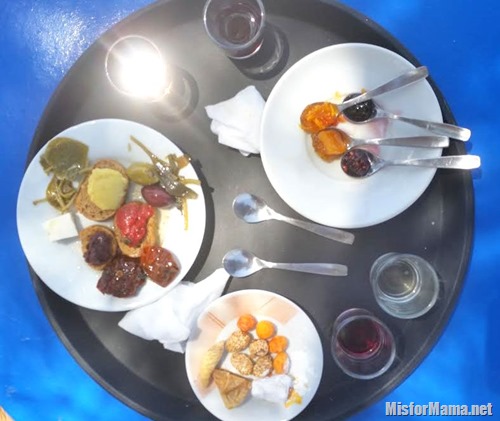 We were far from hungry but we still managed to nibble at the assortment of local cheeses and candied fruits, nuts and dips. It was all so good, and we ended up going back inside to buy several things, not only because of the quality of the food (which was stellar) but because of the sheer joy that this woman radiated. She clearly loved her “job” and loved people, and we noticed that as we browsed in the shop, pretty much every single car that drove by while were inside honked and shouted greetings to her (even though she was inside with us), so clearly, she is a well-beloved island staple. It was such an authentic experience in Santorini hospitality and friendliness and indicative of how almost everyone there treated us.

It’s a special place, y’all. I would go back in a heartbeat.

I mean, where else can you see something like this on the side of the road? 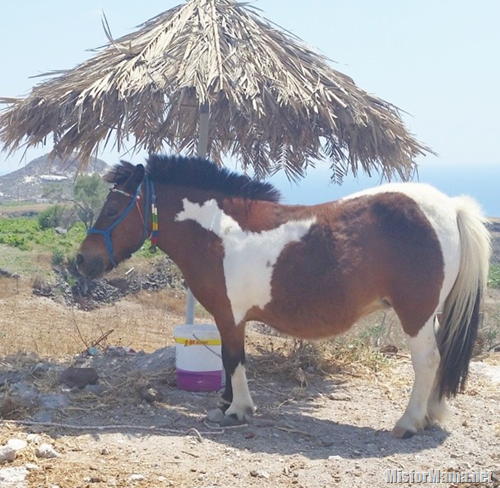 This little guy and his ultra-swanky setup were right beside the shop with the joyful owner, so I’m thinking maybe she’s even super-nice to horses? Either way, he was good for a laugh (can you believe his round belly??).

Okey dokey, folks. I’m officially starving. So, I will sign off for lunch, leaving you guys to drool on your keyboards.