Well, look at me go with a pregnancy update only 3 short weeks after the last one. 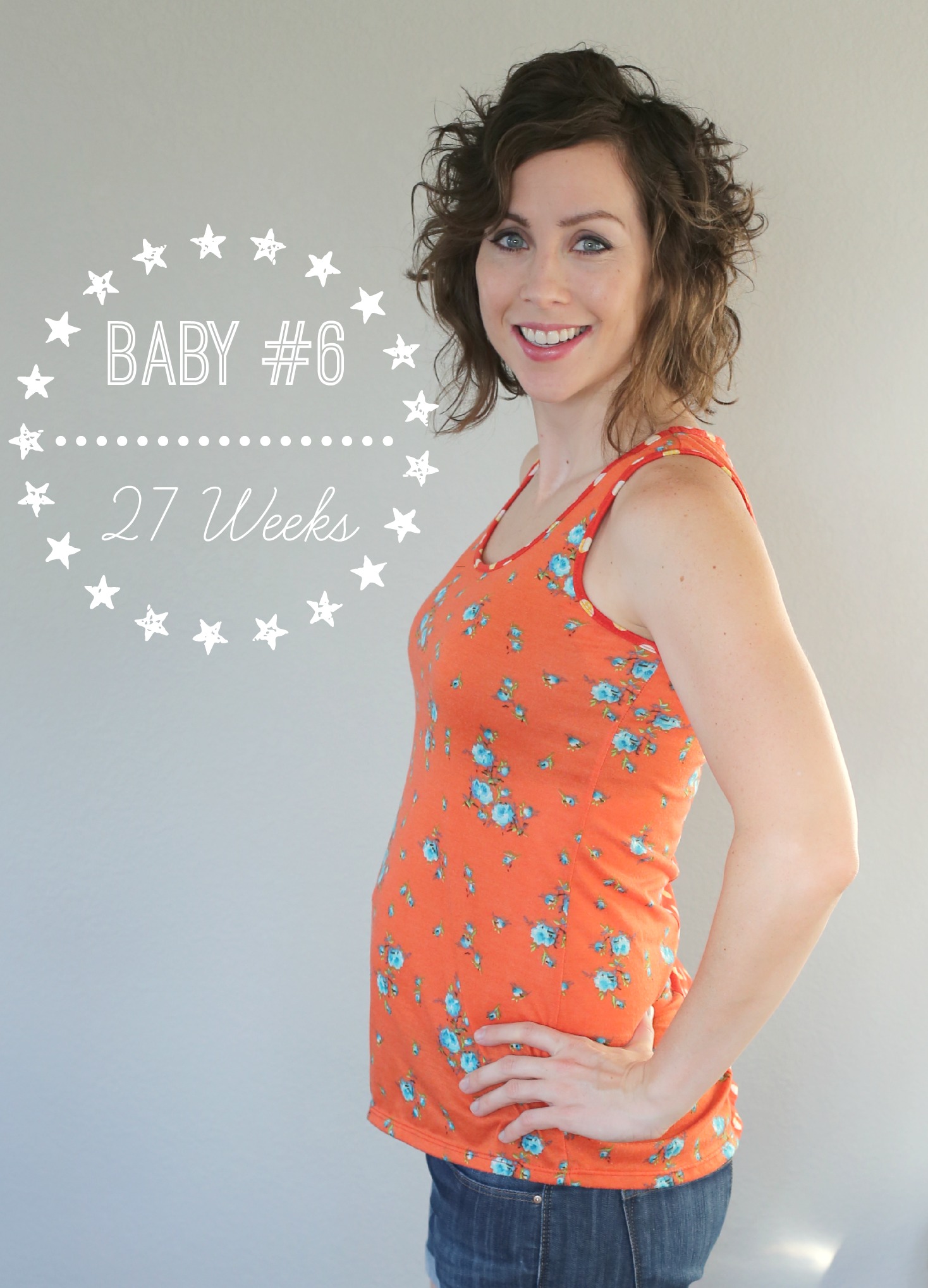 (Can you tell that I’ve got pregnancy hair? Thick. and. bushy)

6 months (27 weeks) just seemed a little too momentous to pass up.

On the one hand, I think, “Holy wow! I’ll be snuggling this little guy in no time!” On the other, all I can think is: 3. More. Months.

I know it will go fast, especially considering that we have 4 birthdays, and multiple holiday celebrations between now and then. But still. 3. More. Months.

I could try to look on the bright side by reminding myself that–hey!–at least I don’t have to gestate my offspring in my body for 2 years like elephants do, but there’s really nothing about comparing myself to an elephant that makes me feel better, so I’ll pass.

So, here’s the lowdown on how things are going right now.

Cravings: These are still random and rare (I haven’t had an Icee in weeks). I usually eat eggs and turkey bacon for breakfast, an apple with peanut butter for a morning snack, a salad (topped with yummy stuff like chicken, pecans, cheese, and croutons) for lunch, a kale smoothie for an afternoon snack, almonds + dried fruit for an even later afternoon snack, and whatever I’ve made for dinner in the evening. Throw in an occasional bowl of ice cream or other treat, and you have the rundown on the never-ending process that is getting (and keeping) me full. Usually, after dinner, I’m good to go and don’t get hungry again before bedtime, but up until then, I’m munching on something every two hours or getting hangrier by the second. (My kids are lined up behind me saying, AMEN!)

Weight gain: Pretty darn high. There’s a reason I’m trying not to think about elephants, y’all. I hadn’t weighed myself once during this pregnancy, but I made myself step on the scale the other day because of that whole being 6-months-pregnant business. And now I wish I hadn’t. It’s amazing what 3 little digital numbers can do to your morale. Still, I know it’s for my little guy’s good, and it will be totally worth the extra time it takes to come off after he’s here.

Exercise: Still teaching and taking classes…although it’s definitely harder than it was even three short weeks ago. I’m modifying more and skipping workouts here and there when my body feels particularly crabby. But for the most part, I still feel better after I make myself sweat and plan to keep going to the end, barring something unexpected. I’m hoping the feeling of lead in my legs subsides a little in the coming weeks (which probably sounds strange, but I actually felt better from months 6-8 with the twins than I did for several months before that…here’s hoping).

Pregnancy side effects: The wild and crazy dreams have amped up considerably over the last few weeks. Sometimes, I wake up with the entire plot for a very convoluted action movie in my head, feeling a little bit worn out from “experiencing it.” I’m convinced I’d be the next big hit director in Hollywood, except that the vividness of the details starts to fade just minutes after I really get my eyes open, and I’m left with just a general impression of sword fights and derring-do.

Also, as an update to the varicose veins complaint…they’re still there. I think they’re actually more prolific than ever. However, I’ve been faithfully taking a combination of an MK-2 supplement and Collinsonia Root, and I’m happy to say that, while it still looks like a colony of aliens is about to crawl out of my right leg, it no longer feels that way. The pain has diminished considerably, so for all of you “ME TOO-ers”…there’s my tip.

Energy: Some days, I feel as normal as a woman who’s been growing her 6th baby for the last 6 months can. Other days, I feel…a little like a Mack truck smacked me, backed up, then did it again. Okay, that might be a wee bit dramatic. I generally feel fine, but my initial nesting phase (which came earlier than it ever had before) has kind of petered out, and there are days (like yesterday, ahem) that my planned 25 minute nap turns into an hour, and I wake up wondering when bedtime’s coming.

Overall though, I have no complaints. And I was reminded how easy my pregnancies are just the other day when my midwife, Diane, said to her apprentice, “See? Abbie’s the perfect example of how you really can do a prenatal check-up in 15 minutes. Or, in her case, 5.”

It’s hard to get too upset over aches and pains and exhaustion when I really stop to think about the awesome and exclusive privilege I get of nourishing my child  for 9 months until (after a healthy dose of pain and agony), he comes out, and I get to see his wrinkly little turtle face and feel his amazingly strong grip as his fingers curl instinctively around mine.

One of my favorite anticipatory activities for my babies is imagining how they’ll compare to their siblings. Each of my children has a distinct look (well, minus the twins, of course…although, even they are quite unique from each other, once you get to know them), but we do kind of have a Shaun + Abbie = THIS mold that they all loosely fit into.

So, the other day, when someone suggested that #6 might have brown eyes, I couldn’t even wrap my brain around it. All of my children have blue eyes. The thought of any other color just feels silly at this point. But that’s the fun of it. He could have brown eyes. Or green. He could be bald as an egg (all of my babies have had hair, thanks to their rather hirsute Mama). Who knows?!

Only God at this point. But I’ll tell you what: this Mama can’t wait to find out.

So, what about y’all? Any updates to share? I know lots of you are pregnant right now, so don’t leave me hanging! 🙂 Anybody else not on speaking terms with their scales right now? I think we’re going to stay broken up until a good three months after I give birth.

Did I leave out anything you’re itching to know?
I thought about including a chart for how many times I pee a day, but something told me you’d be all right without it.