UPDATE: one awesome reader let me know that you can get the entire Kingdom Tales Trilogy here, spiral-bound (there are even discussion questions!) for only $30.

There are aspects of “school,” no matter what route you choose, that pretty much mean “gittin’-ur-done.”

Like math. I mean, yes, I could go on Pinterest every day and come up with cute/clever models and exercises to reinforce carrying the 1 in addition, but honestly, I just don’t have the time. Or interest. And so far, my boys are getting the concepts from simple repetition and practice.

I’d rather reserve my limited supply of creative effort for art or Spanish or history.

But any time I can easily introduce some sort of meaningful media or fun supplementary material that makes learning feel less like work, I’m all about it.

So, I thought I’d share 5 of my favorite learning resources that my kids go gaga for…because they don’t feel like school at all. 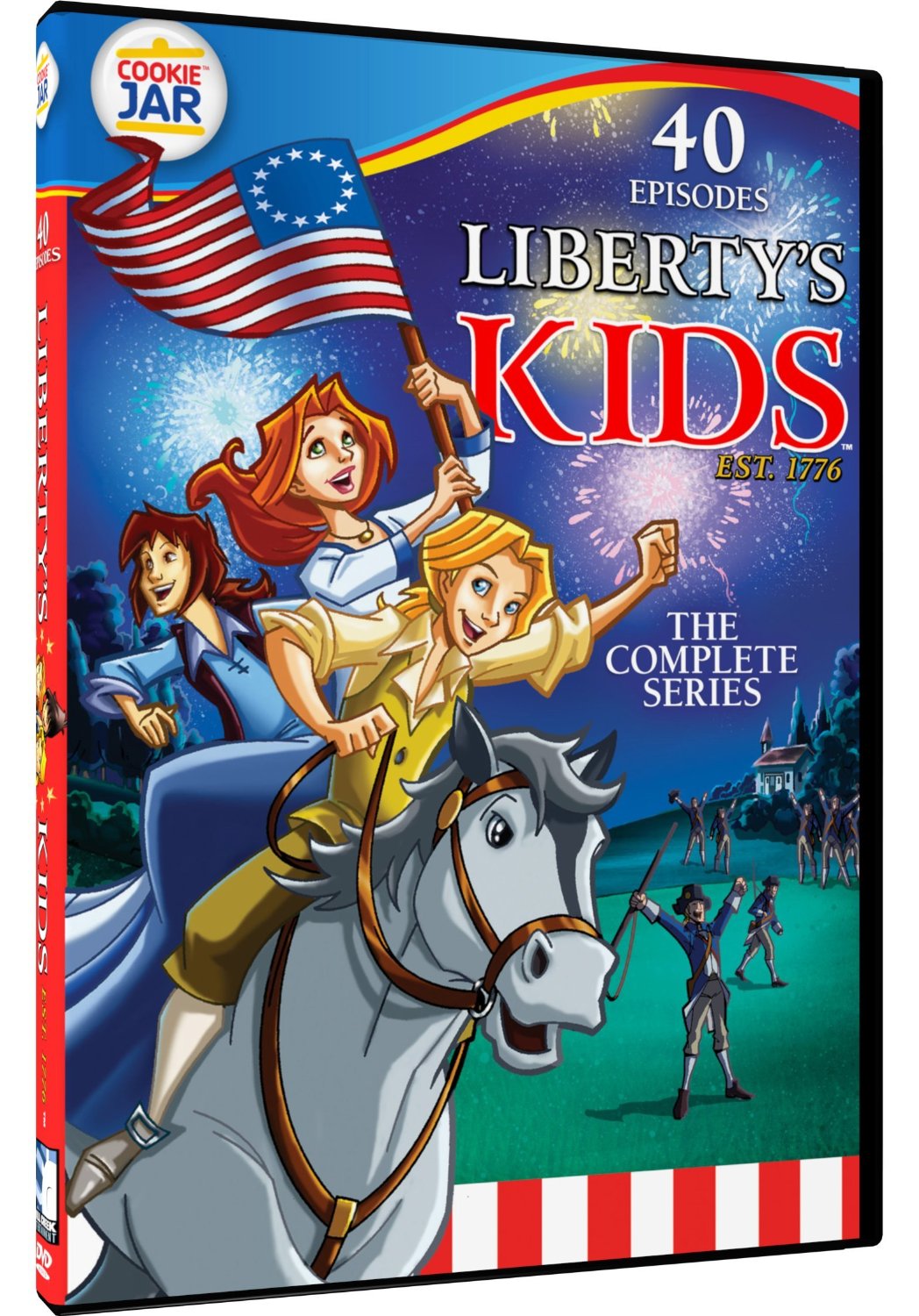 This 14+ hour series on the American Revolution is so engaging and well done. The main characters are teenagers, but the series is completely age appropriate for even your youngest learner (unless they’re easily scared by gunshots or other slightly perilous situations). Told from the perspective of the fictitious characters, James (an apprentice to Benjamin Franklin at his Pennsylvania Gazette during the period before and during the American Revolution), and Sarah, a British loyalist-turned-reporter, it manages to weave tons of factual information within a fun, story-telling framework. It features quite a few impressive voice credits, including Walter Cronkite, Billy Crystal, and Dustin Hoffman, and my kids absolutely eat. it. up.

It’s not part of our “regular school,” but my kids fold all of our family’s laundry (yes, you read that right), and so every other day or so, they fold a couple of loads while they watch Liberty’s Kids. It’s pretty much a total win-win, as far as I’m concerned. (Also? You can get the entire series from Amazon for $5. Whaaaaat?) 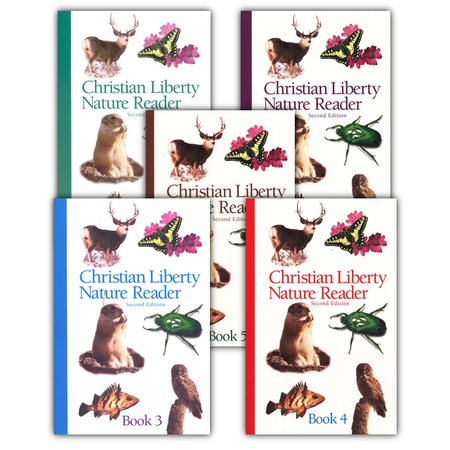 The lady at our local Christian bookstore recommended these as a supplementary resource for science (we use Apologia), and I’m so glad I went with her suggestion, I kind of want to go back and take her flowers.

My boys luuuuuuurve these. Now, granted, they’re more than a little obsessed with nature in general. But these books are just so stinking interesting and accessible that I think the boys would devour the entire book in one sitting if I let them. (I only assign a few pages per day and, if the boys are ever reluctant to do a subject, I ask them to hold off on reading “science” until they finish the subject that’s making them drag their feet; it’s a huge motivator, they love it that much).

Right now, Simon is learning about crabs, and Ezra is studying ants, and, considering that these are boys who have really only recently gotten into this whole “reading thing,” their information retention is staggering. They practically can’t wait to do a daily report about cool details like the fact that crabs can grow back their legs and even their eyes! (It takes a year, but still…wow). And I’m not gonna lie: I find their recitations absolutely fascinating and the passion for knowledge shining from their blue eyes pretty darn exhilarating.

The Story of the World: History for the Classical Child 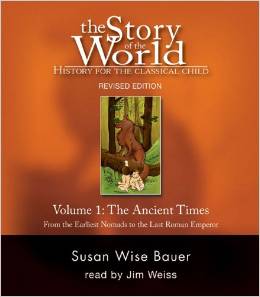 Again at the suggestion of the lady from the bookstore (and after a mom walking by overheard that suggestion and enthusiastically corroborated its awesomeness), I ordered this audiobook version of these history books.

We listen to it in the car on the way to and from the gym, and my kids are totally hooked. I’ve had to back Ezra off several times for being too pushy when he’s trying to hustle me into turning on “the history cd” before I’ve even gotten my seat belt on.

When the reader first started talking, I thought, “Uh oh. This guy sounds stuffy and boring.” But, it turns out, he’s anything but, although his voice is–ahem–mature and his diction is frighteningly proper. He does voices and just generally makes the kid-friendly but super-informative historical accounts (we’re learning about ancient history from the “Earliest Nomad to the last Roman Emperor” right now) come alive. 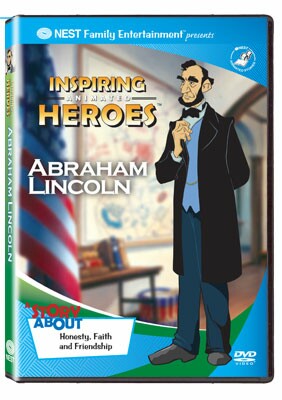 We watch these also when we fold or sometimes in the car for trips. NEST has a huge library of really well done animated videos on everyone from Abraham Lincoln to Eric Liddell to Helen Keller to John the Baptist.

The videos are approximately half an hour and usually cost between $5-8 each. A few years back, I bought several of the collections (which gives you a bigger discount) for Ezra’s birthday, and we’ve been enjoying working our way through them (with lots of repeat viewings) ever since. The quality is surprisingly good, the stories are worthwhile and uplifting, and the messages are clear and positive.

(Side note: please know that, if you order any of the Biblical ones, some embellishment takes place. For example, Jonah is given a plausible back story for his hatred for the Assyrians–they burned his childhood home–which doesn’t actually appear in the Bible. But they never change or water down the actual truths in the Bible, so I just make sure to point out the added parts to my children and then read them the read deal and don’t worry about it too much). 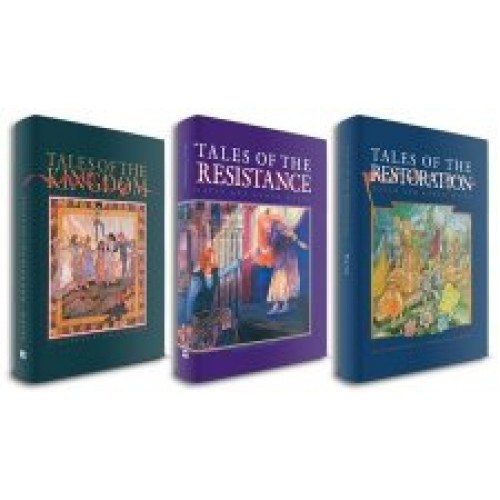 This is the series I’m reading to my older kids at night. My mom read them to me when I little, and I remember loving them. Sure enough, my kids do too.

They’re not strictly “educational,” per se, but I honestly consider it my first job as a mama to instill godly character traits in my children–before math, science, reading, or any other pursuit of knowledge. Sure, spelling is important, but it pales in comparison to honesty or integrity.

The Tales of the Kingdom Trilogy is made up of a series of allegorical stories about the inhabitants of The Enchanted City, where the evil Enchanter rules, and Great Park, which is ruled by the one true King. Each teaches a lesson, and while they flow well and build upon each other, each can be read as a stand-alone story as well.

Best of all, the writing is some of the best I’ve encountered for raising vocabulary levels and forcing kids to think, without losing their interest (I sometimes find myself reading on to the next story while my kids brush their teeth because the writing keeps my interest as well).

And because each story is allegorical, it requires a lot of critical higher thinking skills (just this morning, Ezra asked me if something that had happened in last night’s story was “real,” and I told him that we can’t know for sure, to which he fired back a fact from the story that supported its being intended as literal in this case. I was thrilled! He had not only listened well, but he had been mulling it over and even had a support from the story for his point of view!)

Note: it’s pretty much impossible to find these books in anything but their trilogy form, which are kind of pricey at $90 for all 3. However, if you have a Kindle, you can get each one separately for $10.

So, there you have it: my picks for learning that just feels like fun.

Care to share some of yours? I’m always on the lookout for ways to engage my kids’ minds without their even realizing it.