I’ve talked about shows/movies that I like here on the blog before, but I don’t think I’ve ever gone so far as to devote an entire post to promoting a specific show.

Well, that’s about to change because Shaun and I discovered HGTV’s “Fixer Upper” on our Lake Livingston vacation and proceeded to inhale the rest of the series in a few short weeks after we got home.

Now, we don’t have HGTV. We don’t really have much of anything (just a couple of fuzzy network channels), and what we have, we don’t watch. However, we are big fans of Amazon’s Unbox for the few shows we find ourselves drawn to, and the entire first season of Fixer Upper (there’s only one, but they’re already filming a second) was only $10 to buy and then stream.

Well, it’s essentially a home makeover show, which sounds pretty blah and unoriginal, but the premise is made fresh and engaging by the charm and talent of the family it centers around. 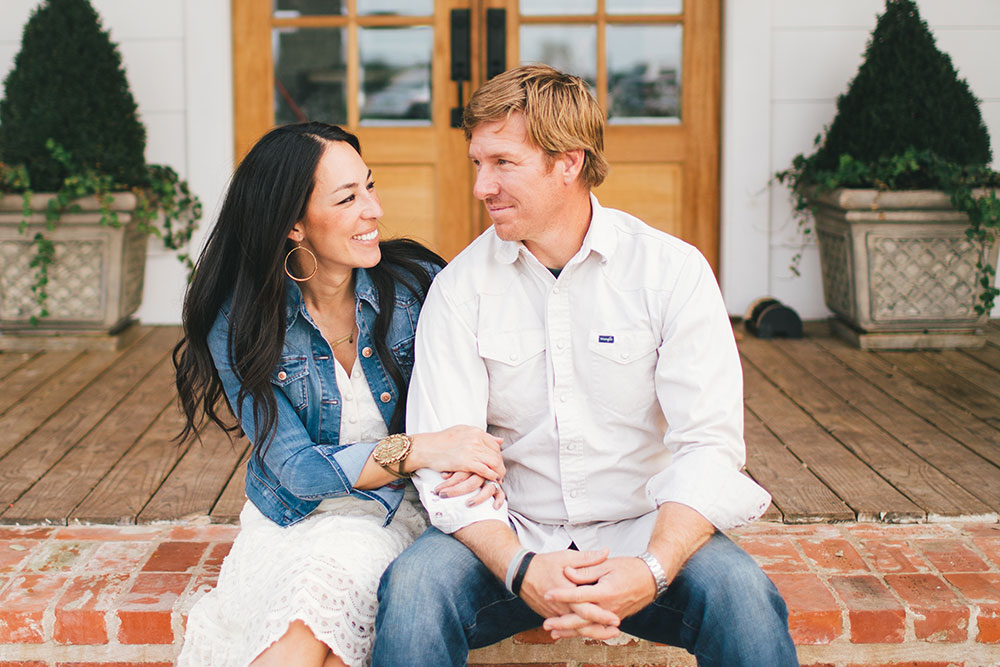 Meet Chip and Joanna (he affectionately calls her Jo-Jo) Gaines, the Waco-based owners of Magnolia Homes. They’ve been married about 11 years and have 4 kids, 9 and under. And in their family interactions lies the show’s biggest draw. 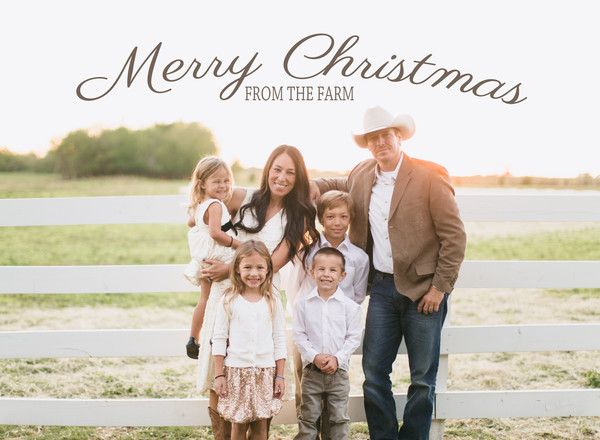 It doesn’t hurt that they’re all ridiculously cute. But the real surprise is how much they all seem to genuinely like each other. Sure, it’s an HGTV show, so there are aspects of it that are obviously scripted, but watching one of their children hurry to help another tamp down the dirt around a newly inserted plant in their farmhouse garden or seeing one brother unselfconsciously drape an arm around the other’s shoulders in the background of a shot that has nothing to do with them…It’s hard to fake that. Their kids are polite, well-mannered, and exude a sweetness and innocence that is rare and beautiful to behold, and while I have no doubt that they do their fair share of squabbling, it’s clear that the family is invested in each others’ well-beings. As Joanna points out in one episode, they make it a point to gather around a table for dinner every night, no matter how hectic their schedules get (and, with a new hit show, a realty business, a brick and mortar + online decor store, and a blog, it’s hard to imagine a family with more going on). Now, that may mean gulping down pizza around a coffee table while Joanna hustles to style the last minute details of a house before the big reveal the next day, but it’s a priority nonetheless. 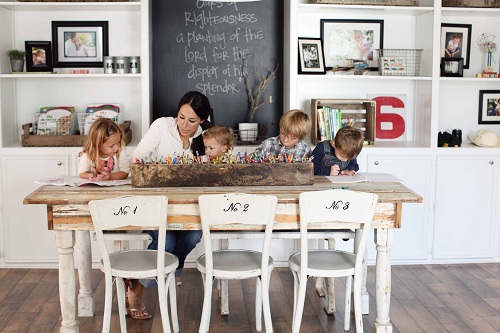 A lot of all the family togetherness and sweetness can be traced to the Gaines’s Christian faith (you can see a glimpse of Joanna here in their adorable country farmhouse, decorated with all things meaningful to their family, including chalkboard scripture verses). They make no effort to hide their love for the Lord, but it’s woven naturally throughout the show rather than showcased or clunkily hammed-up.

In addition to the family dynamic, it’s just fun to watch Chip and Joanna be Chip and Joanna. He’s a lovable, self-deprecating goofball, while she’s admittedly more high-strung but still manages to maintain an admirable level of dry wit in the face of his antics. Their comfortable, flirtatious camaraderie works really well in a show that’s technically about beams and French doors but really wouldn’t be anything so very special without their chemistry.

Of course, I haven’t even gotten to the main business of Fixer Upper, which is the fixer uppers themselves.

The basic premise of the show is that Chip and Joanna show a couple three prospective homes at varying levels of disrepair in desirable neighborhoods in the couples’ price range, and then they choose which one they want to buy and to what extent they want to renovate it.

Not too surprisingly, given the show’s tagline of “we take the worst houses in the best neighborhoods and transform them…” it’s almost always the saddest, most neglected option (with the biggest budget margin for renovations) that the couples choose. Again, there are aspects of the show that are highly formulaic (like the inevitable call for more money when they run into an “unexpected” foundation problem or whatnot), and I honestly think the show would be much smarter to do away with those, and just let it flow.

Even so, the proceedings, if predictable (especially when you’re watching it at a rate of 1-2 episodes a night, several nights in a row) are still highly enjoyable, and the big reveal at the end (after all the fun banter and progress footage in between) is always gasp-worthy.

I don’t want to ruin anything for you, but I did want to share a few of the before and afters as well as a peek at my favorite rooms from this season’s episodes.

First up, check out this amazing transformation: 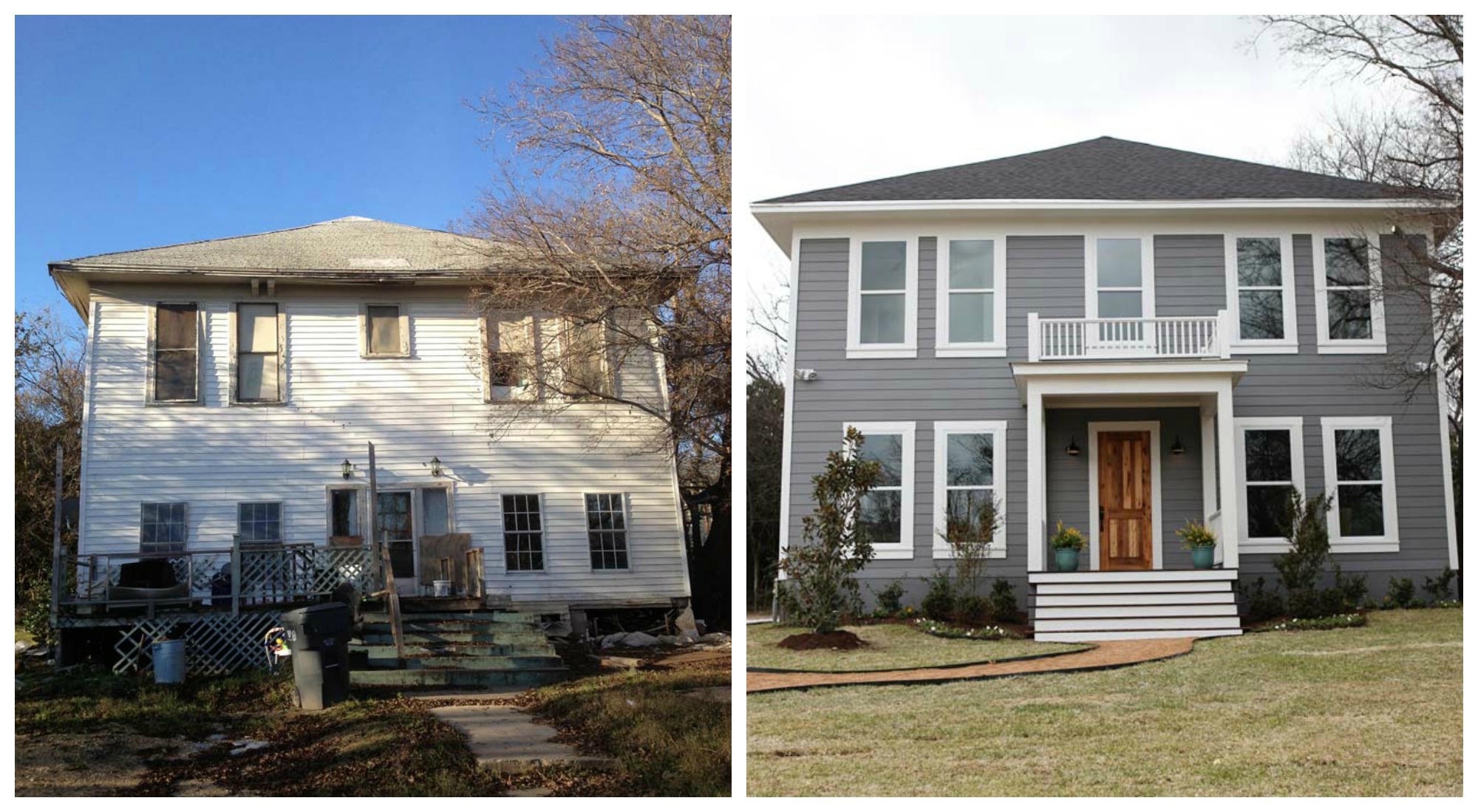 The Gaines’s custom furniture-maker, Clint Harp, and his family were featured on an episode and ended up buying the house on the left for only $10,000 and then getting the house on the right (yes, the same one, but it sure doesn’t look like it) for approximately $115,000 when all the renovations were done.

Which is another thing I love about the show. Since, it’s based in Waco, where realty is crazy-cheap, the all-in prices are really reasonable and make some of these feats seem actually possible to pull off.

Of course, it wouldn’t hurt to have someone like Joanna Gains to decorate for you. 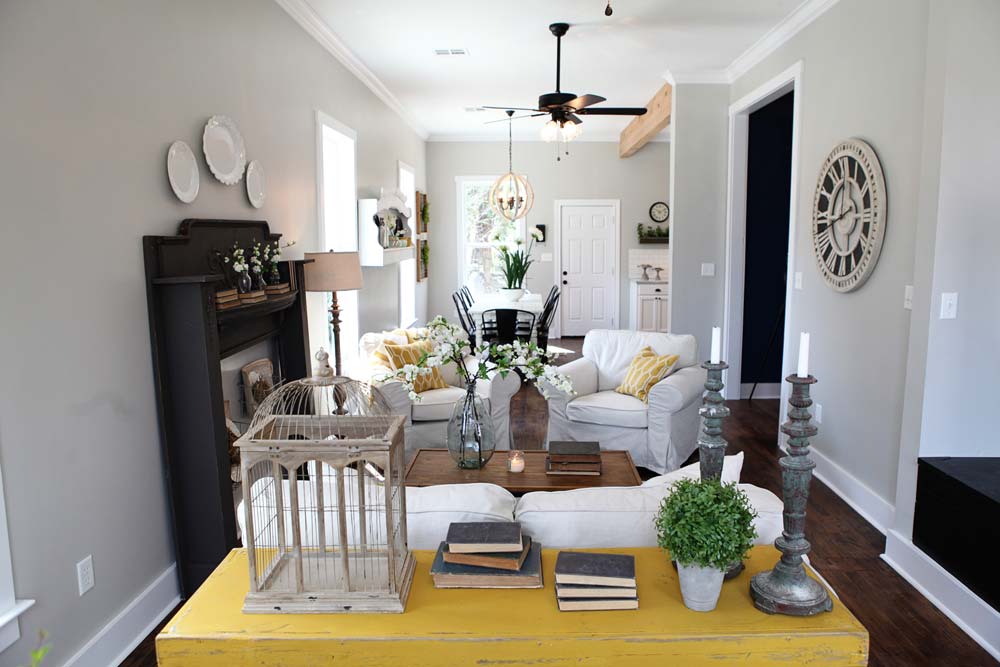 Other than the staggering exterior before + afters, the best part about the houses is by far Joanna’s styling prowess.

And if your style is ultra-modern or minimalist, you probably won’t appreciate her work as much as I do. But for a lover of vintage with a funky and traditional twist, her designs are a feast for the eyes.

Another extreme change was this French Country makeover…

I was honestly skeptical of their ability to take a traditional red-brick ranch-style home and transform it into the French country style that the owners were looking for, but they totally did it.

And, in perhaps my favorite exterior transformation of all, the Gaines took what the buyers fearfully referred to as “the haunted house” and turned it into something classic and beautiful and still totally fresh. 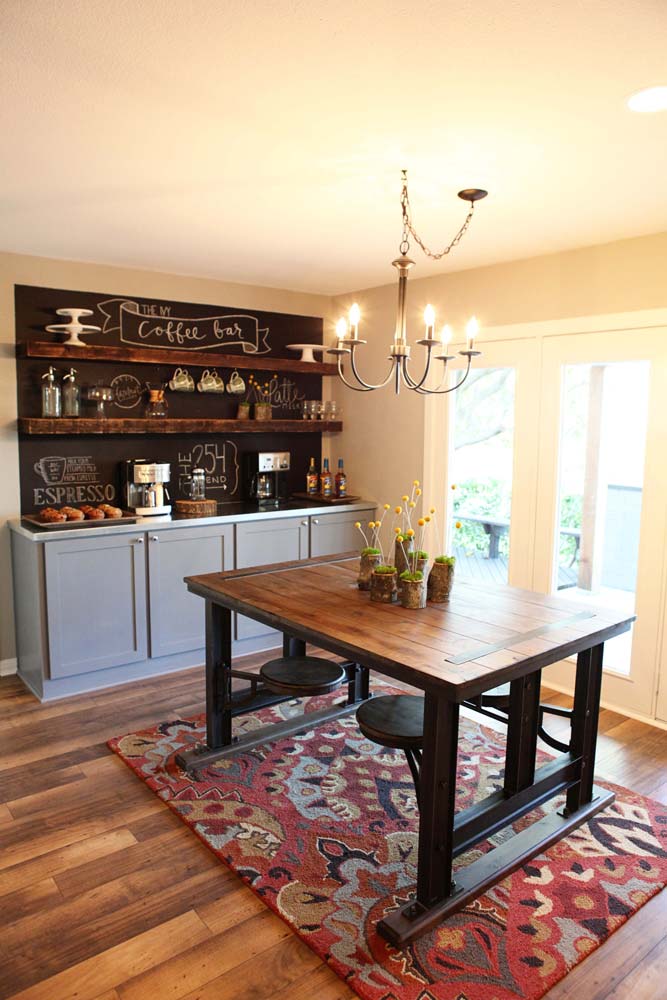 Love everything in here from the colorful rug to that World Market table + stool combo (I’ve seen it in person, and it’s super cute) to that amazing coffee bar (and I don’t even drink coffee!) 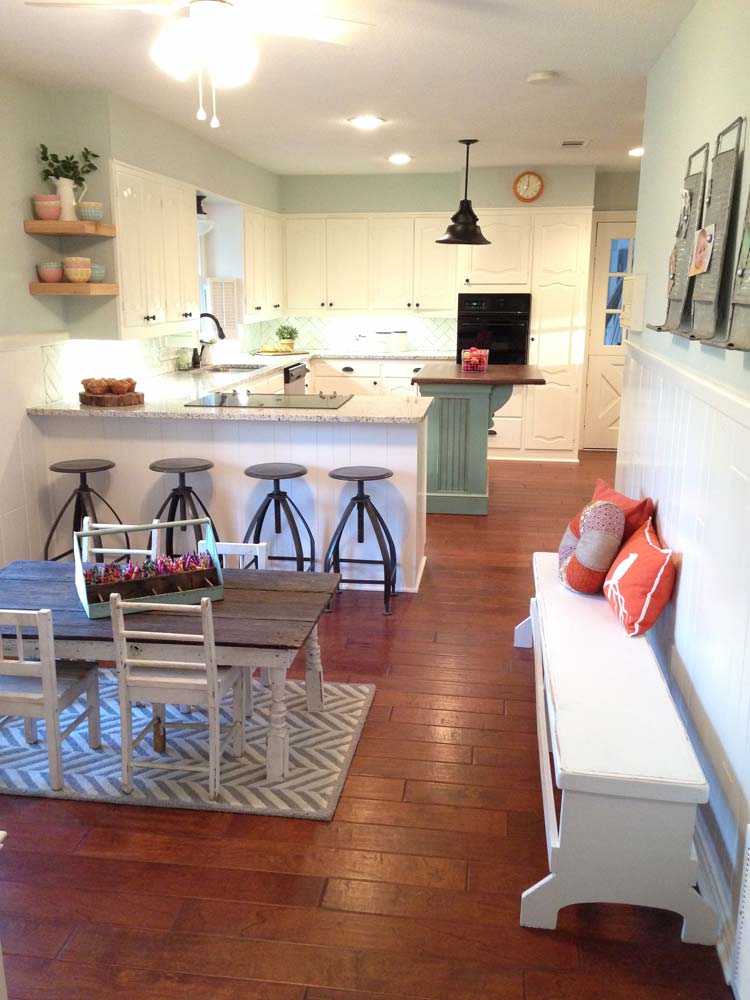 The bench. The miniature farm table. The hanging washboards used as magnet boards for pictures. The toolbox-turned-Crayon-holder. It’s all great! 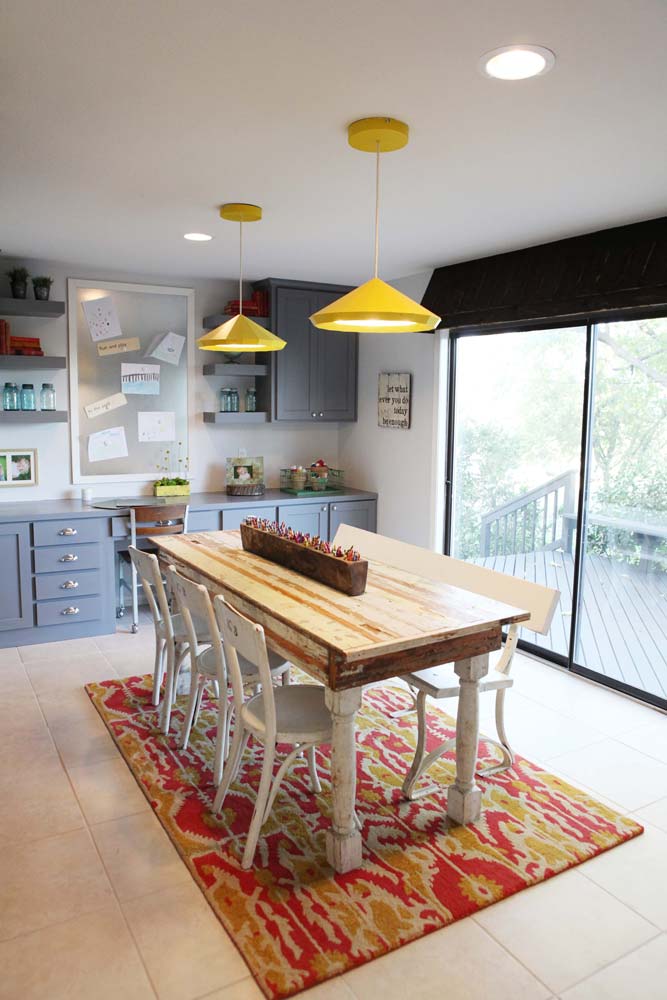 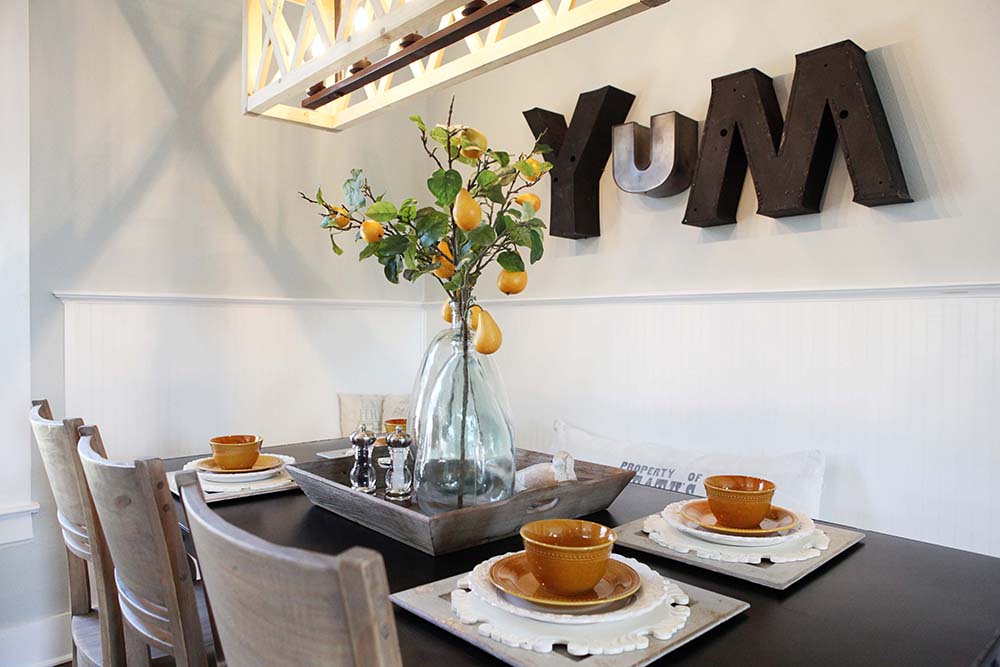 As I mentioned before (and as you’re probably seeing), there are lots of repeated elements in Joanna’s decorating style, but one of my favorites is her use of old neon letters that have been stripped of their lights and then hung on the wall. The “yum” above is just one example of many. 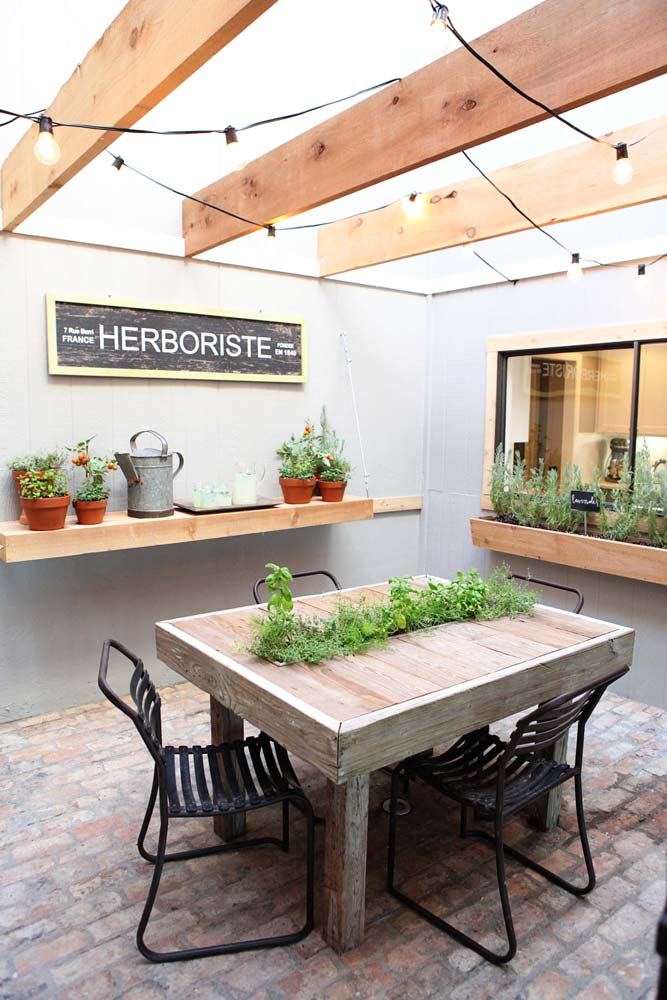 Believe it or not, this is actually an indoor space, which at one point was a creepy atrium (the buyers joked about all the snakes that were probably hiding in it) that Joanna transformed into super-chic herb garden. 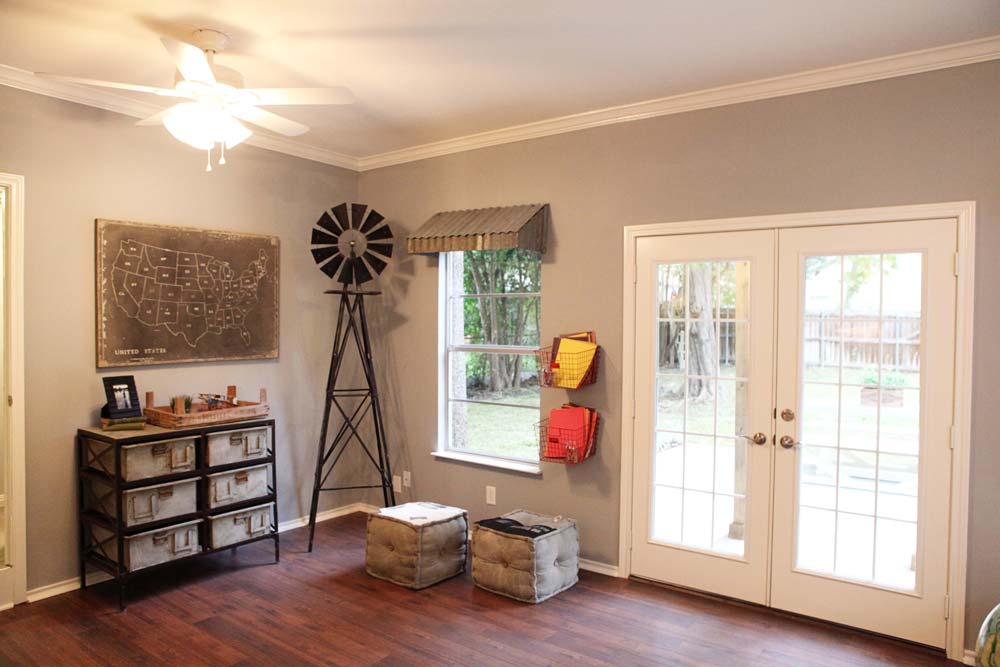 There aren’t very many kid spaces, but this one with the windmill + locker storage + b/w map is really fun. 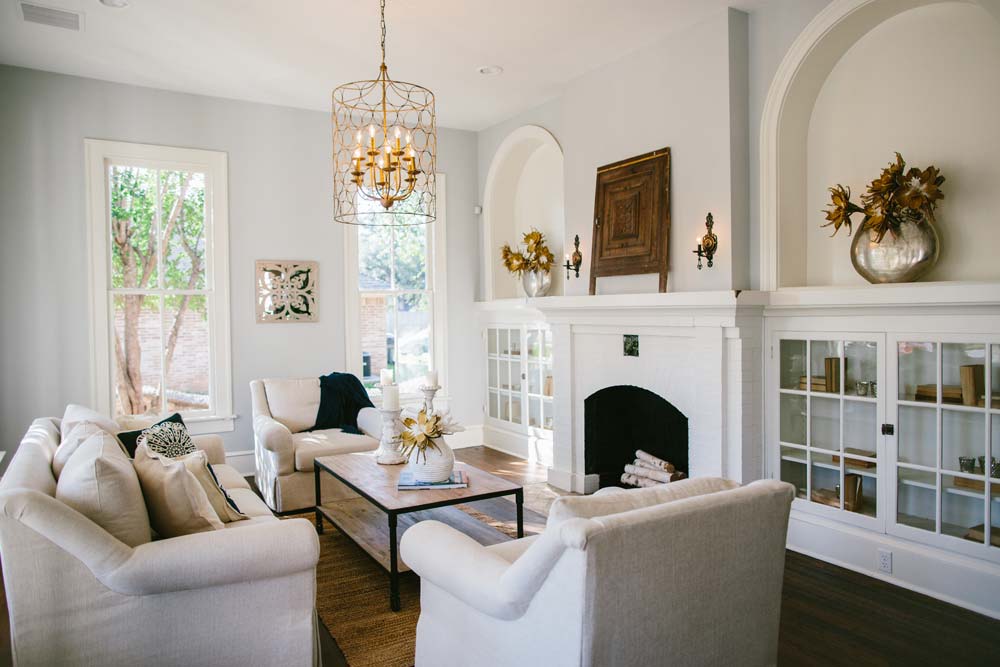 And I’m totally in love with that chandelier, which can be bought from Joanna’s online store.

I know it probably sounds like HGTV called me up to plug this show, but I promise they didn’t. I just so rarely run across something that showcases such impressive talent combined with such consistent likeability, all while being positive and drama-free. So, yeah. I just had to share. If you’re looking for something fun, uplifting, and–let’s face it–pretty darn inspiring to watch, I highly recommend Fixer Upper. In case you can’t already tell. 🙂

Do you watch Fixer Upper? I don’t use the word “girl crush” often, but I think I might have one on Joanna. That girl has mad skillz!

{All images are from magnoliahomes.net}